Since it's Pink Saturday time at Beverly's blog, I thought I'd jump back to our Paris trip and show a little bit of pink -- perfect for Valentine's Day! 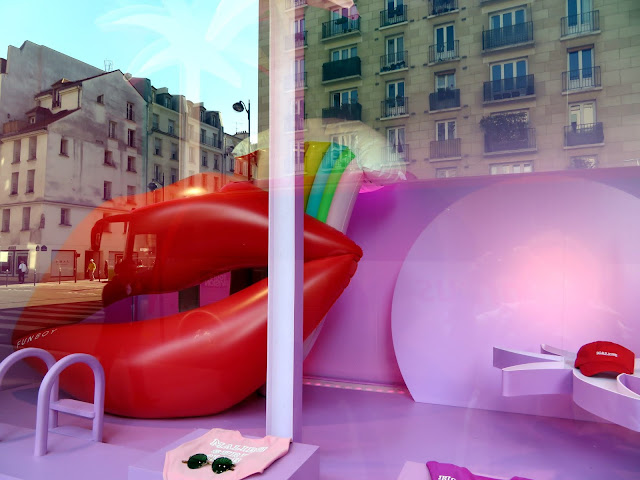 This was the window display of Le Bon Marche, considered Paris' first major department store. It didn't begin that way, though. The store was originally founded in 1838 as a novelty shop, its shelves carrying lace, buttons, ribbons and goods that included mattresses and sheets. There were only four departments and the store itself was small. 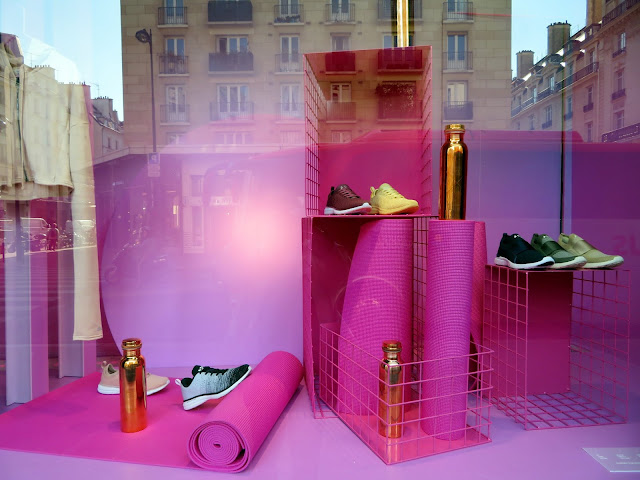 In 1852, Aristide Boucicaut stepped in. He had originally come to Paris from the north of France to be in the fabric industry but discovered he had an aptitude for retail and for marketing. He (with the support and input of his wife, Marguerite) and added things we now associate with retail, including refunds, exchanges, marketing, and expanded merchandise selections. By 1869 the store expanded into a larger building on the Left Bank at Rue de Sevres. 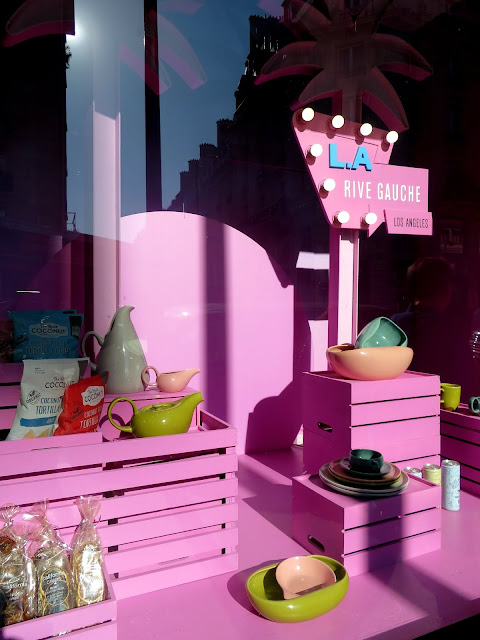 I found it interesting to learn that by 1880, half of the stores employees were women and those who were unmarried could live in dormitories on an upper floor of the store. He also offered medical assistance, paid holidays, classes in the evening, and a retirement fund, among other things. 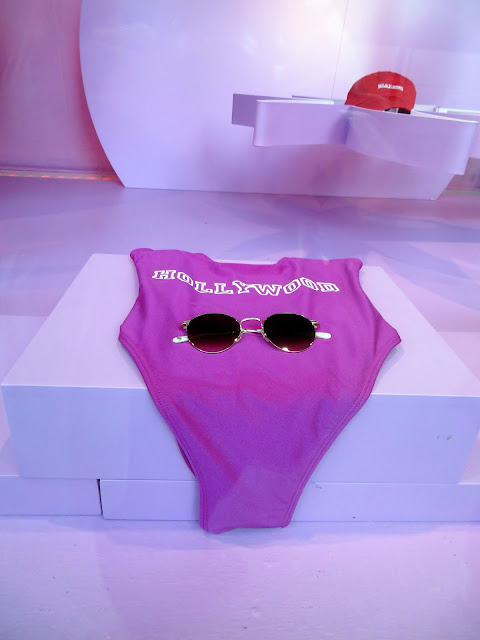 After his death in 1877, his son began to manage the company, and following his son's early death, Aristide's widow Marguerite took over, turning the business into a joint stock company with several employees as founding members. Some of my favorite vintage collectibles (probably antique by now!) are these colorful chromos, (chromolithography). These were used by Le Bon Marche and other stores to advertise certain products. Some told historical stories, others are simply lovely and beautifully done cards. (I should do a post on those someday!) 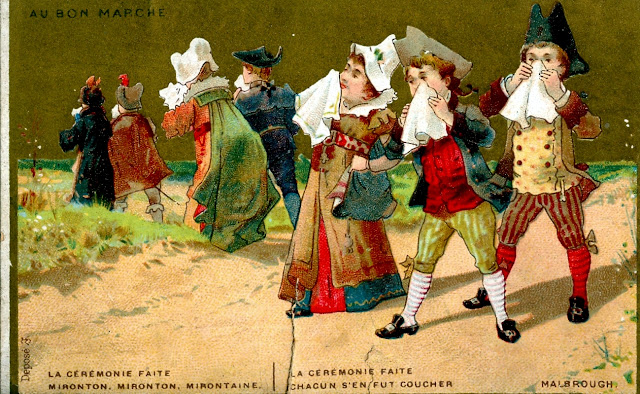 The store itself is large and imposing and quite beautiful. I was disappointed we didn't have much time to spend here (the next-time list!). I wouldn't have minded exploring the neighborhood, either! It was quite beautiful. 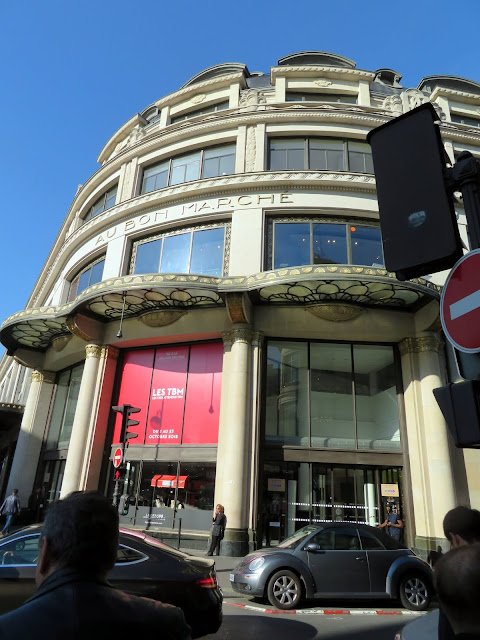 It's food hall is remarkable. I shared a bit about this during my Shopping in Paris post HERE.  But this is a quick reminder of the candy hall... 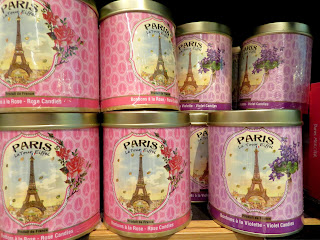 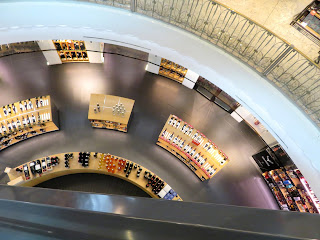 The high-end shopping in London, as we saw HERE is not without its overpriced charms, too and I couldn't resist another peek at those winged wedges (tall wedges!) that so many of you commented on in the post. 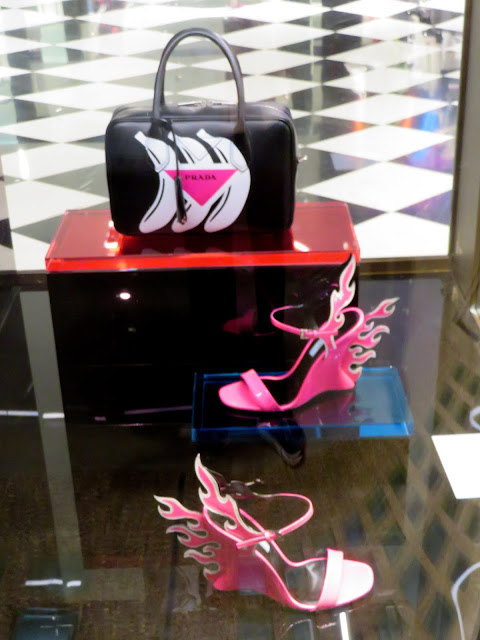 If I had even thought of trying these on, I would be a dead (or at lease seriously injured) woman within about six feet!

Gotta have those shoes...haha. Great shots.

YOu must have pink radar! Great photos!!

Wow! Those are some shoes. Everytime I have been in Paris I wish to spend some time in some high end department stores, but haven't done much. This one looks like one I would love. Now I would like that purse in the last picture. And of course French candy, who could resist. What a fun post.

I would seriously injure myself on those shoes too! But how fun they are!!!

Oh, those pink winged shoes! Why can't I be young and foolish again?

Great post Jeanie. I missed it when we were there but I’ll be sure to go when I return.

Amazing photos as always!!! Thanks so much for stopping by!!
Hugs,
Debbie

That window is very avant garde. I'm not sure if I like it. But those pink shoes are a riot. I couldn't wear them, but they are some serious foot design. Happy weekend Jeanie. Hugs-Erika

What a fun store to visit full of history! There is a period Spanish Netflix show called Velvet where the employees live in the basement of the department store in Madrid. I never realized that was actually a real thing that happened in Europe! It sounds like it had an eclectic start with 4 departments including both sewing good and mattresses.

Such an interesting back story on this store, Jeanie! The window dressing is quite unique and those shoes would kill me. It is fun to view the unusual.

That is a lot of pink - and I love it! Very cool finds and I loved the background info on Au Bon Marché.

Oh! Those lips, and the reflection, great combination. Plus the story behind! Beautiful. We need more people like that.
Those shoes sure are on fire. If I was younger... :-)

I agree with you about those shoes, ouch! Hugs, Valerie

I think all this pink is causing my estrogen level to soar!

Your photos are perfect in pink. The food hall at Le Bon Marche is a must...I spent almost an hour there. There was a wonderful restaurant with outdoor seating right across from Le Bon Marche that we enjoyed on our visit to the area.

Enjoyed the story behind Le Bon Marche, they very forward thinking business people.
Beautiful pink images and those shoes are a killer for sure!

Paris is especially pretty in Pink. Enjoyed the story behind Le Bon Marche, and I love the window shopping. Always fun to pull up past travel memories and photos. I am horrified at the though of even trying on those shoes!
Enjoy the weekend Jeanie..........

I like the circular shape of the store's structure. In fact, I have a "soft spot" for this kind of shape.
The pink color is ,sadly, associated nowadays with breast cancer, but in those days it was just a beautiful color, greatly loved by customers.

WOW, this post is in the pink. I loved the shops, the high end pieces and of course, those flaming shoes I would never be able to wear.

The women who worked at that company and lived in dorms on the premises reminds me of a show I watched on PBS, which I can no longer remember. It was about a store very similar to the one you described.

Oh Paris in pink is so pretty. The food hall looks beautiful, I am always attracted to them (LOL). This is a fun post Jeanie!

The woman who bought the pink ones must be a revolutionist.

Such interesting history of how this grand store began! Those pink shoes are something!
Jenna

What a clever guy Aristide was - and I had no idea that this was the start of the department store as we know it. Fascinating post, Jeanie, full of interesting photos and information. The pink shoes - well, wow, what can I add to everyone else's comments? Whoever bought them couldn't fail to make an impression. Don't you love the art nouveau look to the exterior? I have peeped inside but never explored. Reading your posts on Paris it seems to me that there's an awful lot I haven't done there.

What a fascinating history, Jeanie! I love to hear the background on things like this. Did you watch the series about Mr. Selfridge? Very similar story and so very entertaining.

Loved your "pink pictures". Have a great Sunday- xo Diana

Lauren @ My Wonderfully Made said...

This reminded me of Selfridge's. I watched the mini series (and many of the girls did live in dormitories on site) and then I researched the 'real' history and found it to be quite close to the series.

You do such a great job of taking pics for us and sharing the story. It's interesting that Aristide Boucicaut offered so many benefits.
I have to say, those shoes are something.

Loved reading the information in your post and seeing your fabulous photographs.
A big WOW! to those pink winged shoes!

Paris stores really know how to do window displays! That is something I noticed right away during my trips. From the patisseries to the department stores, they know how to draw people in! I loved hearing about the history of the store - especially how many women were employed and the benefits they provided. So cool!

Loved seeing all this Paris pink! I'm sure after the Notre Dame tragedy you were happy to know you saw so much of Paris on your visit as we never know what the future holds and how fleeting time can be for even the most stalwart places. I learned that on 9--11 and try not to take anything for granted again!