It seemed fitting that we should get another look at St. Pancras station, where we had arrived on the Eurostar ten days before. It's a remarkable building. 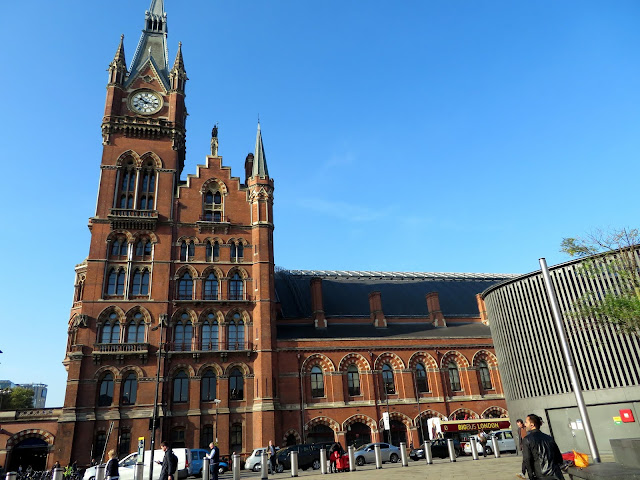 Having opened in 1868, it was commissioned by the Midlands Railway in 1857 and has been going strong ever since its opening. 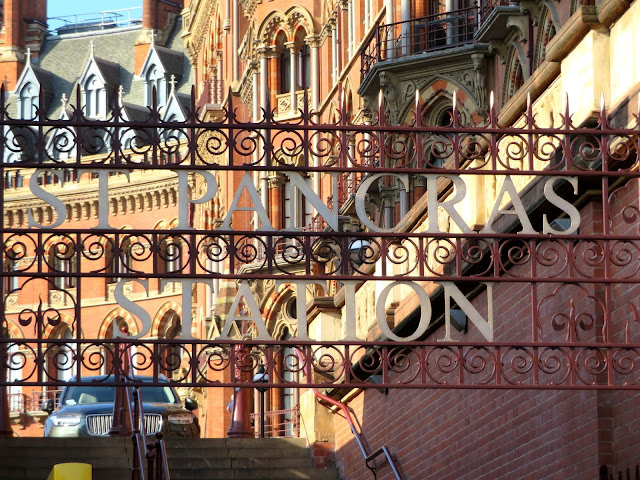 The building was bombed in both World War I and II but you'd never know. 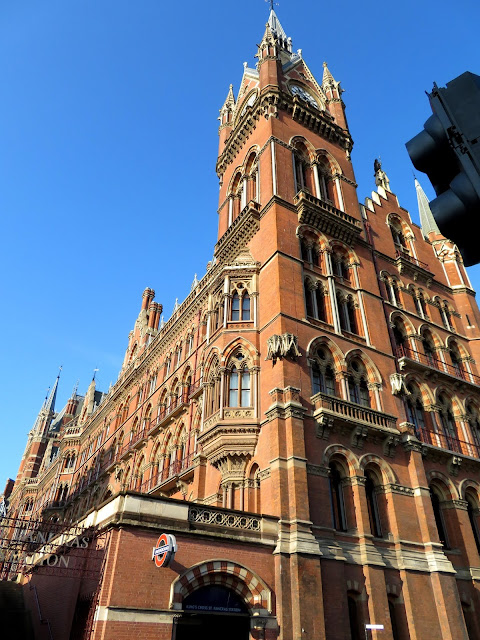 There is now a hotel as part of the site. I'm guessing it's not low rent! 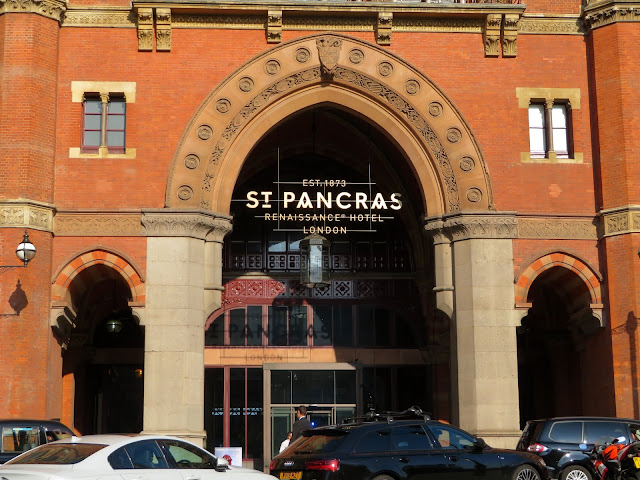 The station is a few blocks from the British Library and we enjoyed a lovely walk on yet another beautiful fall day. 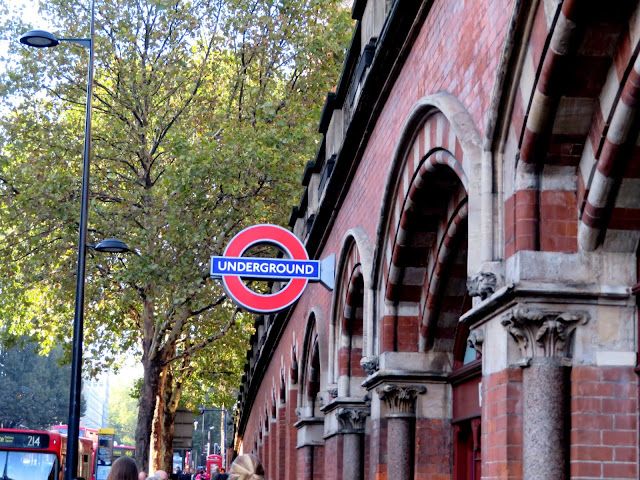 Some places don't allow for great photo ops. The British Library was one. 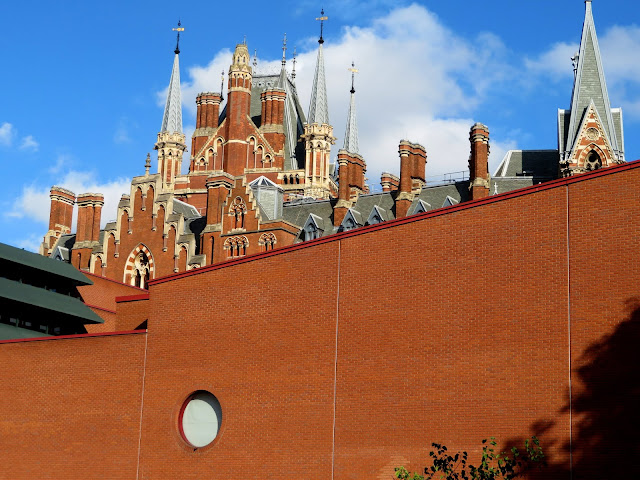 No photos inside the exhibits and even if you could, it was such low light, they wouldn't turn out. So, I can't show you what it was like to see the Monty Python exhibit, Shakespeare's first folio, music written in Handel and Mozart's hands, or the Guttenberg Bible.


...or a wonderful original version of Alice in Wonderland.


But Rick was happy as a clam because he was able to go into the actual library (versus exhibits) part and check out some maps pertaining to an ancestor, a ship's captain, presumably a slave ship captain, which isn't particularly pleasant to think about. 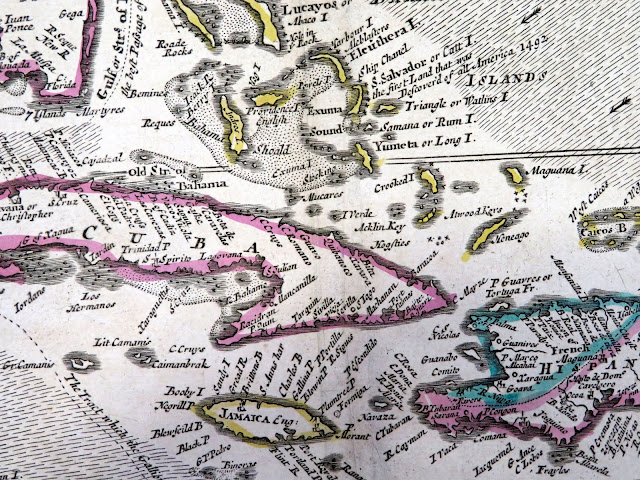 There is even an Acklin's Island in the Caribbean named for him. 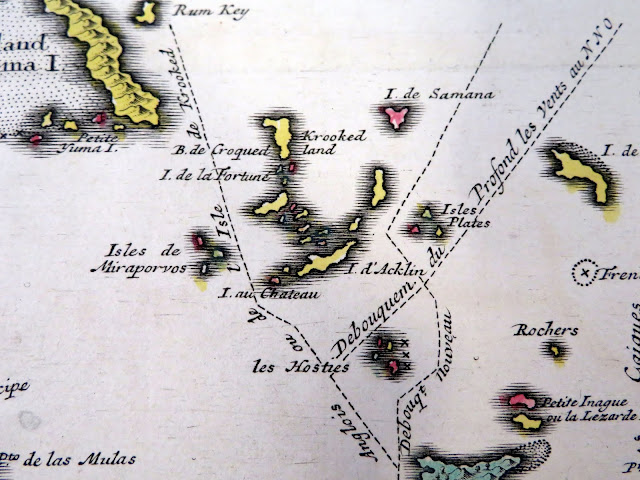 I didn't have my passport with me so I couldn't take advantage of the stacks, but there were loads of other exhibits to enjoy -- and one of the best gift shops ever, so no problems!
Posted by Jeanie at 12:22 PM

Wonderful photos, St Pancras is really a building worth seeing, and the British Library is filled with treasures. Thanks for sharing, hugs, Valerie

I see all these beautiful old buildings in your travel-log and it makes me sad that so many of our old and buildings have been torn down. You're a good photographer, but the way. Thanks for sharing.

Hello, the hotel is impressive. I would have liked to visit the library!
Wonderful photos! Happy Thursday, enjoy your day. Have a great weekend ahead.

Jeanie, it's lovely to see St Pancras station as my husband and I are considering that or the Victoria station when we go to London. How exciting to view such relics of the past in the British Library. How lovely you enjoyed such beautiful weather! ♥

You could never have gotten me out of that library!!!

All of these pictures just make me want to visit London even more. I will add it to my bucket list.

Looks like a very interesting place. I'll put it on my list to visit the next trip! Gorgeous photos fo the station.

Some years ago a copy of the Magna Carta was on display here. It was quite something to see that ancient document- even if I couldn't understand a word.

Jeanie, how delightful to get caught up today on your travels! It's been a very long time since we visited the British Museum, and I don't recall having to show our passports in order to see the actual library/stacks. Did Rick find it as awe-inspiring as I did? I was speechless.

Jeanie, your grand adventure keeps getting better and better! The architecture is amazing! Though the Queen of Hearts is a bit scary!

We never made it here so I am happy you did and are sharing. An interesting history and I'm sure it probably has a pricy rent. Love seeing all the photos, and it is so hard to get good pics of these amazing books and drawings. I did see the original drawings of Beatrice at Victoria and Albert. I was fascinated as I'm. sure you have been with these. LOL, I would not be to upset if I had a great gift shop to entertain me............

Beautiful buildings Jeanie.
I would be thrilled if I found documents pertaining to one of my ancestors :) How exciting for Rick.

Thanks for sharing the original documents in the library's possession.
As for the St. Pancras station,I've been there and I can say am fond of all underground stations both in London and in Moscow.

The British Library exhibit is amazing and the best deal in the city. There are so many cool things to see, isn't there? Thanks for reminding me of all the great exhibits and the view of St. Pancreas. It is impressive. Stay warm. Hugs-Erika

WOW... it's just stunning, is St Pancras! The British Library is one of our fave places in London... it wouldn't be a trip without stopping there! Got got the best photo spot of St P's from the Library--fantastic! The shop at the Library is also amazing... all those books, notebooks, gifts and goodies... *sigh*... Thanks to taking us back, Jeanie! ;) ((HUGS))

What a fantastic place to visit. At least you were able to find images online to show us what you couldn't photograph. Amazing building and you would never know it had been bombed twice.

It all looks wonderful. I can't help but ask- how was the Monty Python exhibit?

That is a magnificent building. Hard to believe it was bombed in both World Wars. How nice for Rick to be able to check on some ancestry. Not many of us can say we have a relative with an island named after him!

I do love museum gift shops - so many unique treasures in one place. I have the same problem as you when trying to take photos of buildings in big cities. Often there is too much on top of each other to get a good shot. Lovely post!

Sounds like you had a wonderful time. I love maps..... potential for adventure and exploration.

I've heard about St. Pancras Station, but I'm sure I've never seen photos of it. If I had, I surely would have remembered! Those chimney stacks are fabulous -- as is the entire building. You know your plays and movies better than I do. Was there a tv program, or movie, or play that involved St. Pancras? It's ringing some sort of bell. (Maybe I'm thinking of St. Elsewhere!)

Just wonderful photos!! definitely the trip of a lifetime!!Thanks so much for stopping by!!
Hugs,
Debbie

Now this sounds like an amazing place. How I would love visiting this library. I love libraries!

This brought back memories of the day I spent at the British Library. I was with my Brit Lit professor and we both were enthralled with the original manuscripts. It is an amazing place. I’d so love to go there again.

Watch that he doesn’t put you in leg irons!

Jeanie, St. Pancras station is a beautiful building. It is hard to believe it was bombed in both World Wars! You really planned your trip so well to see all that you did!

Wonderful time at the library. Am anxious to hear about the Acklin ship captain. I do think he told me about the island, or at least that it existed.

Two more of favorite places in London! Isn't St. Pancras wonderful? It's the station where we arrived every morning and departed from during our last visit because our friends where we stayed live outside of London. I always enjoyed this beautiful building. We also took the Eurostar from here, and what a let'down station Gare du Nord is compared to St. Pancras. The British Museum truly is exceptional. I loved the music and manuscript rooms, those were my highlights. Your photos are beautiful.

Phil tried to get me to watch Monty Python last month. I gave it 20 minutes and said - please, watch this without me some time! Ha.

Pictures of green grass have me aching for spring/summer!!