It wasn't all party hats and dancing! Our New Year's Eve had two parties and we didn't wear hats or dance in the first one at all! 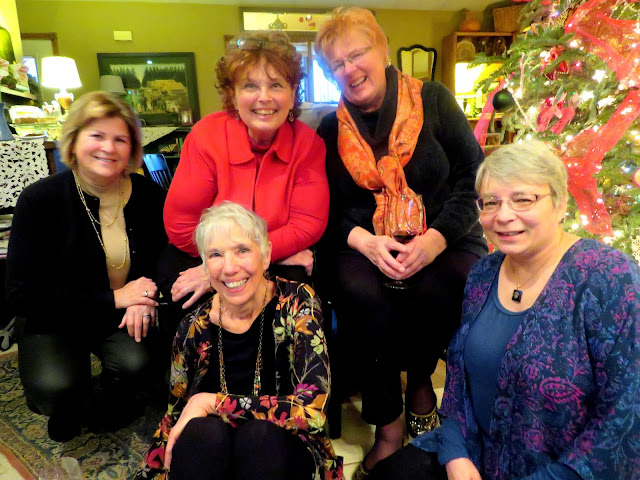 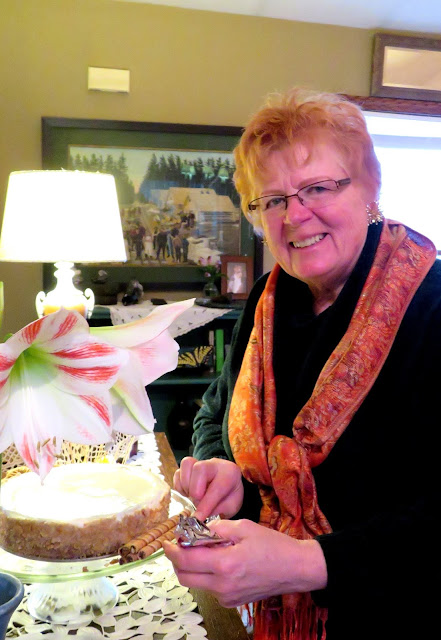 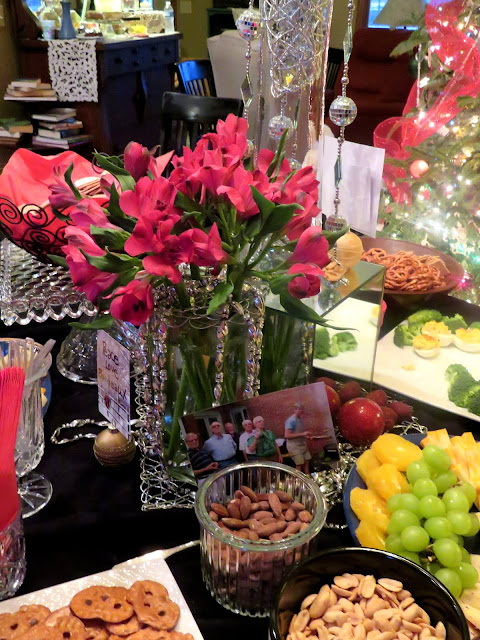 She also made a killer punch for those of us not drinking wine. Half of everything -- big 7-up, big Vernors or other ginger ale, half-gallon ice cream and bottle of rum (yes, half of it all). So pretty and tasty, too! 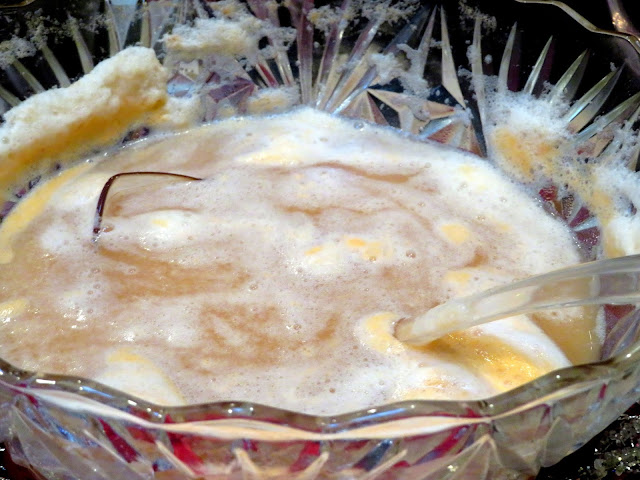 We left stuffed! And fortunately, not in bad shape because we had another gig that night! 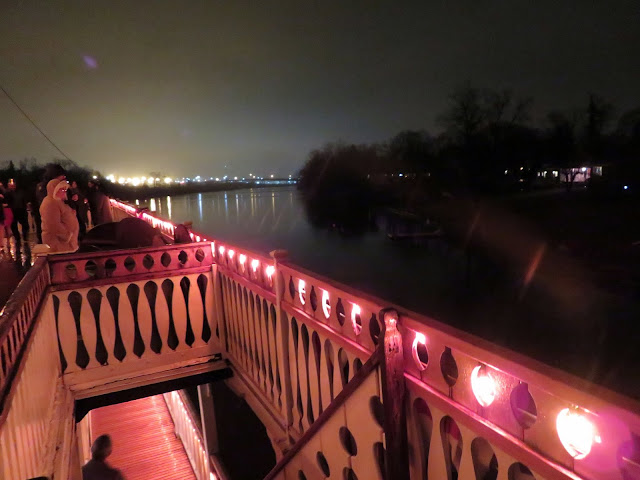 At eight we boarded the Michigan Princess riverboat for a New Year's Eve bash that included dinner, dancing and a performance by Root Doctor, a wonderful blues band. (Cue the Music) 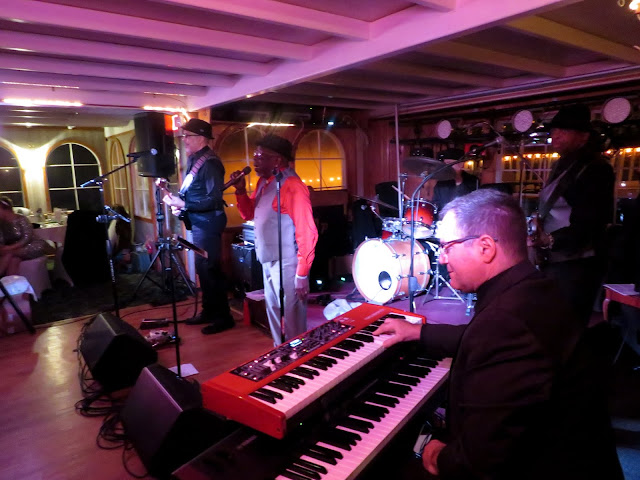 It was a festive evening and the men dressed to celebrate. 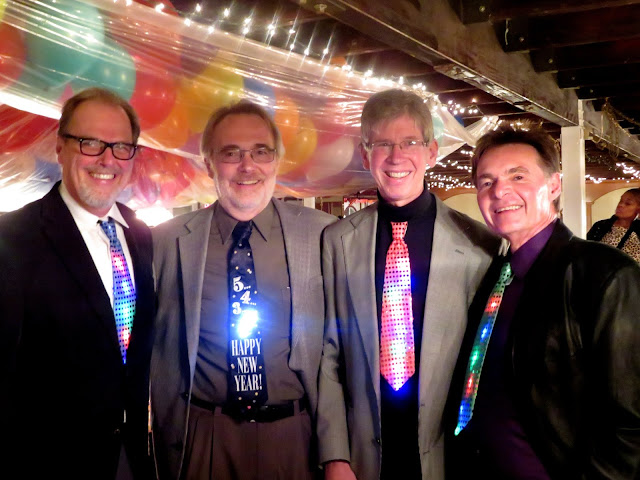 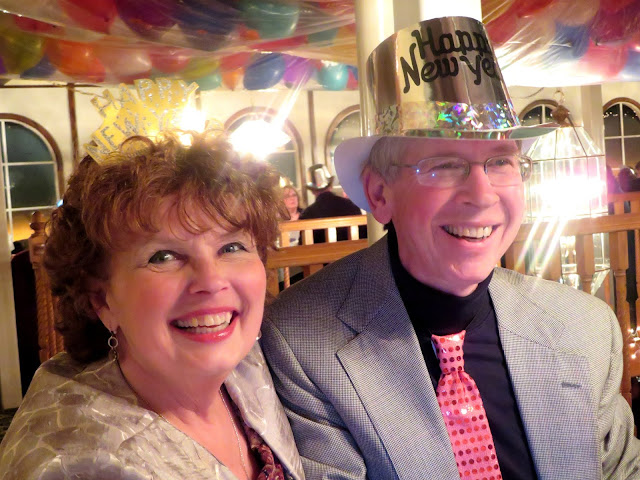 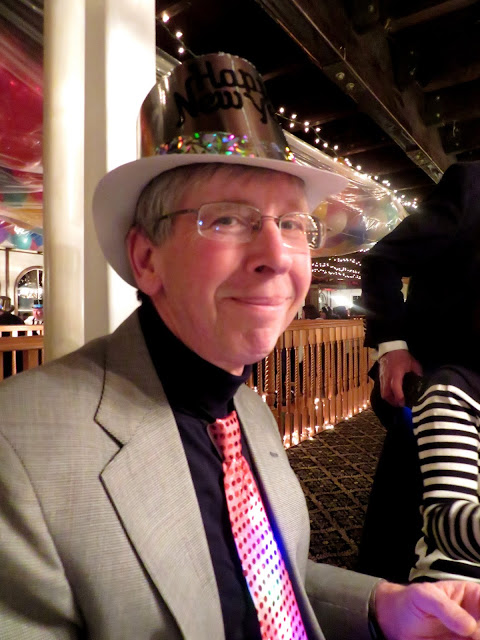 Dinner was served and after Barb's feast, it was pretty grim. The bar service was unbearably slow. Of course, we were still pretty full and neither of us really wanted to drink all that much, so that was OK. Well, OK enough -- we weren't the only people at this party! But we all had a terrific time! 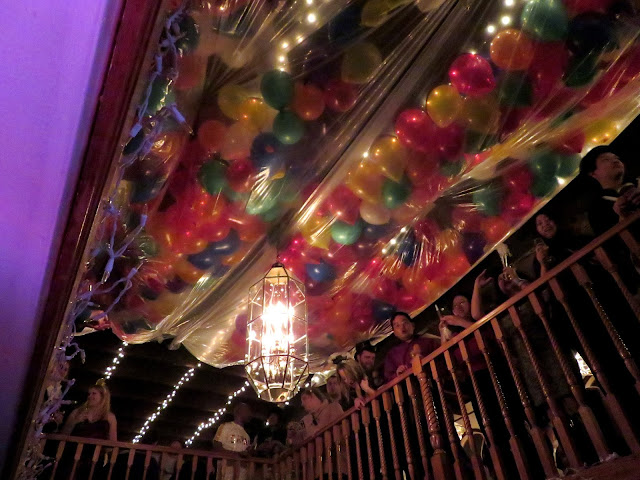 (If you like the blues, let me recommend Freddie and Root Doctor -- check them out on youtube as Freddie Cunningham and Root Doctor Band. I've known Freddie for all the time I worked at the TV station -- he'd be singing in the rafters while setting lights. The band has been going for I'm thinking 20 years and performs all over Michigan.) 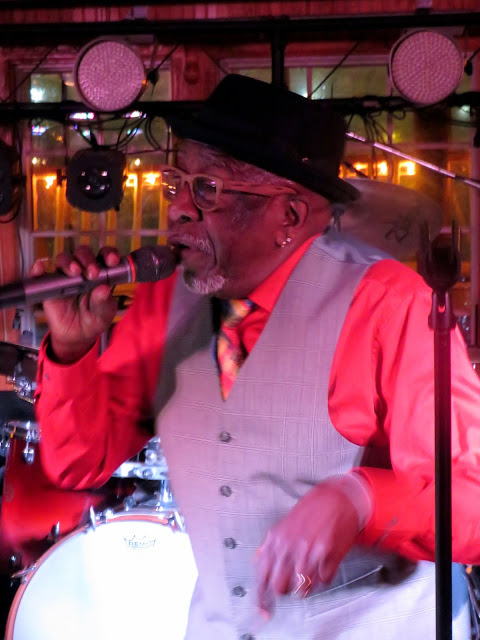 At midnight, the balloons we'd eyed in the ceiling earlier in the evening dropped. 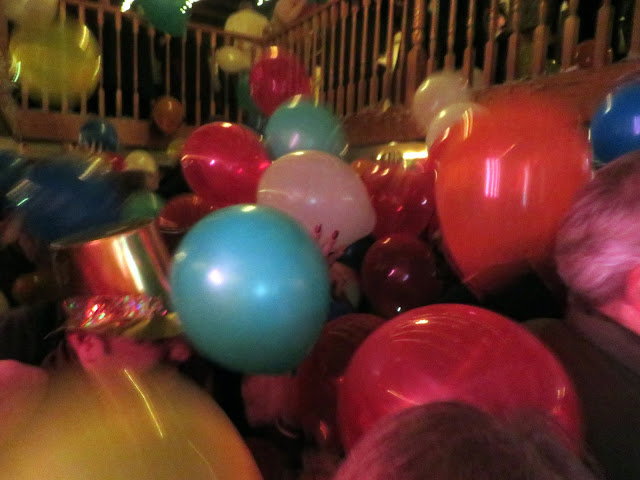 There was Auld Lang Syne, champagne and loads of wishes for the new year. And, I might add, so far, so good!
Posted by Jeanie at 5:42 PM

What a great way to ring in the new year. I love Root Doctor and Freddie. They play over here, too. I also love the Princess and can imagine how much fun you guys had. Too bad about the slow service but sometimes that can be a blessing when you don't want to drink or eat a lot.

What a fantastic spread your friend put on!! Too bad about the service not being the best later in the evening, but at least you were still full from earlier. Boy you guys know how to celebrate! Wonderful! -Jenn

What a purrfect New Years Eve! Not one wonderful party but two!

Good for you for staying awake, Jeanie! Ha! I couldn't do two parties in a row. I guess I'm out of shape. LOL!

Two parties - how wonderful! The pictures of both the 'girls' and the 'boys' are charming! The delicacies prepared by Barb look yummi, and make one's mouth water.
Wishing you many parties during 2019!

A fun way to see in the new year!

You had a busy day! But looks like fun. And wow, what a new year's feast you had that afternoon. I will say it looks like a great way to wrap up 2018. And those photos of Rick's ie makes it look like it was sparkling. :) Hope you have a lot of these fun times in 2019. Hugs-Erika

It looks like you two had lots of fun. Barb's food selection sounds delicious.
Happy New Year, Jeanie! May it be healthy, happy and filled with many joyful events.

Goodness, you know how to bring in the new year in style. Two fabulous parties and two wonderful, yet very different events. I am impressed.

Happy New Year!! What a nice way to end the old year and bring in the new year. I love the Blues.

You guys look great! And what a fun New Years.

Oh, what a grat party!
It had to be a nice time for both of you!
We've spent New Year's Eve at home with our daughter and cats. It was calm evening for all of us :)

Sounds like you had 2 wonderful parties. I like the sound of all the food you got at your friend's house, wow. I have never even seen a ham that big! The riverboat celebration looks amazing, too. They do them here as well, but it's all way above my spending limit. Good for you to enjoy such great parties. Enjoy the whole year! Hugs, Valerie

Now that sure is a big, big WOW!
Glad you had such wonderful food on your first party, but, wow, the boat just looks terrific!
The music is terrific, too.
And the balloons, awwww, wonderful idea, much better than fireworks!
That sure was a proper good-bye and hello! To a great New Year!

A really nice way to ring in the new year! My husband and I had a nice dinner of snacks ( chicken wings, buffalo chicken dip, pizza, chips, salad, taco ring, and a few other small items) while we played Euchre with friends.

Oh, I love this. Freddie and ROot Doctor Band is smooooooth.......

OH wow you guys really have a lot of fun! I hate to admit that I was asleep before midnight! Your friend put on quite a nice party. I’m listened to the link for the Root Doctor Band...very good!! Cheers to a happy, healthy and loving New Year!

Hi, Jeanie...Happy New Year! :))) So NICE to catch up with you after post-Christmas celebrations and travels! So much to chat up on here... Lovely to see all you've been experiencing and enjoying in recent days, my friend... Oh, the New Year food and fun--YUM!! And then the riverboat... WOW! Love the pic of the guys in their flashy ties...haha! You all have the best fun... Here's to more FUN in 2019... Wishing you & yours all the VERY BEST!! ((HUGS))

I was on the Michigan Princess years ago in the summer. Looks like a great party but it must have been really cold too! Living in Florida I have turned into a tropical houseplant.

Well I''ll say it again..no moss grows under your feet lol..I hope that's the saying.
You guys all look great and happy.What a wonderful way(s) to spend NYE.Sets the pace I bet:)
I hope your whole year is party hats,wine and song!

I like the idea of an earlier new years party! New Years Eve with a baby is a really tough - especially since Paul goes to bed at 6! We got invited to a friend's house and they suggested we bring Paul and put him down in the pack and play but that seemed like way too much of a hassle. So I sent Phil and stayed home which was actually quite nice. I never have the house to myself in the evening! I watched a couple episodes of Season 8 of Call the Midwife, had a couple of glasses of wine and called it a night at 9. Phil was home by 9:30-10.

Your New Years sounded fun, though! The food your friend prepared sounded amazing! Bummer about the poor service at party #2, though. Glad there was great music to distract you from that! And a balloon drop at midnight is fun! Everyone looked great!!

You brought in the new year so beautifully! The rum punch looks SO tasty!

Jeanie, how much fun! I envy you young'ns. We were in bed and asleep by 10:00..Happy New Year..xxoJudy

Root Doctor - what a blast to hear in person!
Happy, happy new of the year to you, dear Jeanie.
Love the way you celebrate life:) It stirs my joy, i tell you:)
Thanks for sharing the festivities,
Jennifer

Now both events sound wonderful. We just don't get out on NYEve. I wish! This year we were going to go out for dinner, but I ended up too sick to go. Off to bed I went and I didn't even hear the fireworks. Maybe next year!!

Well that is my idea of a dream NYE, especially with someone else doing all the work!! You look great, Cath

Jeanie, you enjoy life and it always shows on your pretty and happy face. What fun you had celebrating!

Wow, a double celebration for New Year. Your friend put out a huge variety of food, no wonder you were full for the second party.
For the first time in about 25 years we didn't go out this New Year and just stayed home watching a movie and calling family overseas.

what a marvelous time! And nothing like a great rum-based punch! :)

What a fun new year! I love the guys festive, light up ties. Your friend's buffet looked fabulous.
We were in the hospital on new year's eve until late afternoon and so exhausted we did not stay up to see the ball drop. Hope that never happens again!

Sorry the service at the bar wasn't too great. Glad the rest of your New Year celebrations were enjoyable though, and that 2019 is so far going well for you. Happy New Year!

Sounds like you had a memorable New Year's Eve. Wishing you all the best in this new year.

I want to party with you!!! Wow, what a great spread of "heavy hors d'oeuvres" at Barb's. Looks delicious and so much fun. Nothing like seeing favorite friends on New Year's afternoon. And wow, how delightful to dress up and party on the riverboat! You look beautiful and Rick so dashing. What fun and who cares about food when your having fun. Love all your party pics Jeanie...........