There is a yin and yang to traveling together. Chinese philosophy explains how opposite forces are actually complementary and interdependent in the natural world and how they give rise to each other as they interrealte to one another (thank you, wikipedia!) 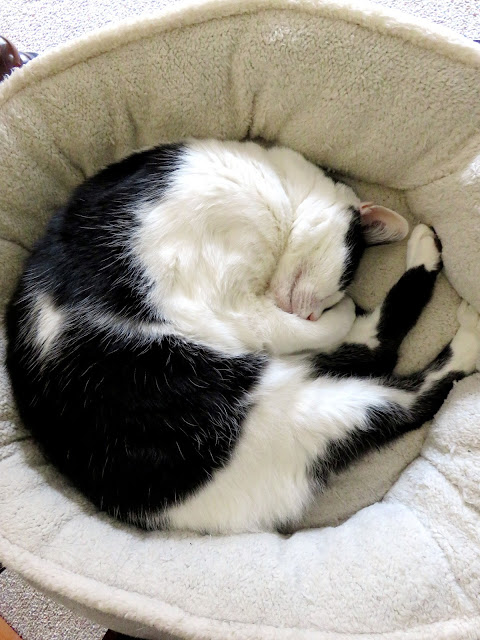 In no where is that more evident in traveling with a partner! For Rick, it was a bike ride as soon as we landed in Geneva, to be followed by work at the trade show. For me, it was to connect with people I enjoy in a part of the country I love. While I am content in my world and eagerly anticipate venturing out to see sights and then return home, Rick just wants to move! (He was ready to move to Oberlin last fall, Massachusetts or upstate New York last week and Canada any time!) 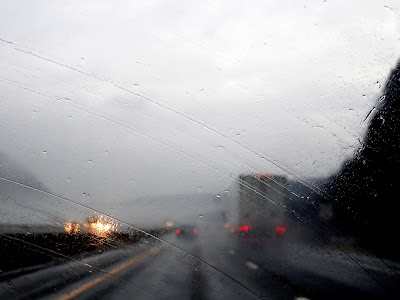 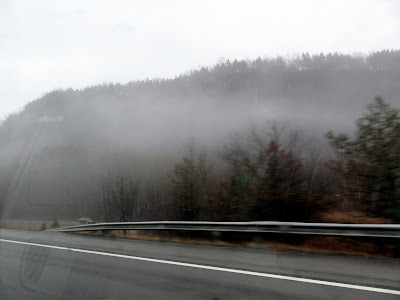 But our opposite forces clearly interrelated, as wiki would say, on this trip! After driving through torrential rain, we landed in the best spot imaginable -- the cozy home of Randy and Elaine, Rick's brother and wife. 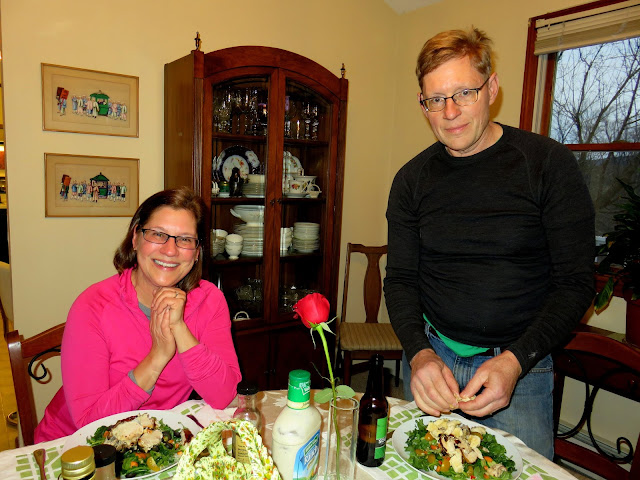 We were warmly welcomed not only by the humans but by Pickles and Daisy, two of the friendliest cats ever! 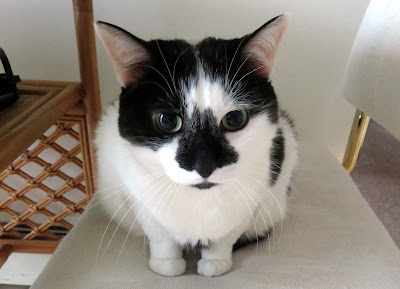 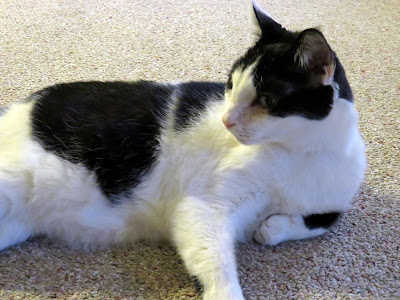 The following morning it was off to the trade show where Rick and I hawked his wares. 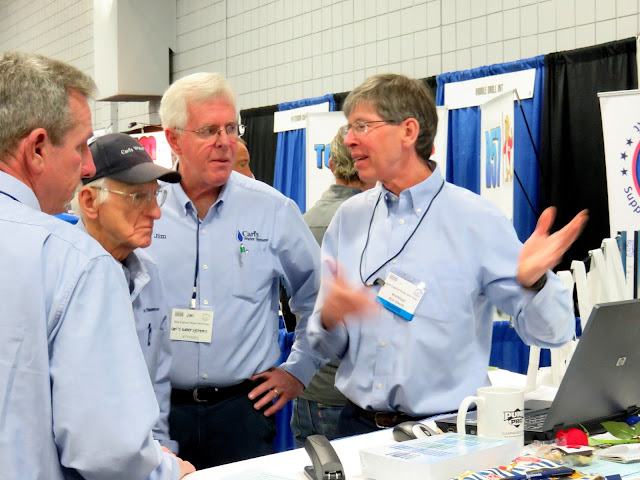 Then a special event -- the reunion of Rick and his high school friend Eugene after at least 20 plus years (and more likely, more than that!). Gene and his wife met us for dinner and both were so terrific I wished they lived next door! Somehow I felt we would be doing lots of fun things together if we lived closer. While I expected Rick and Gene to pick up quickly, I often have a hard time meeting with new people and yet within minutes I felt like I'd known both of them a long time. It was such a treat and I was sorry when the evening ended. 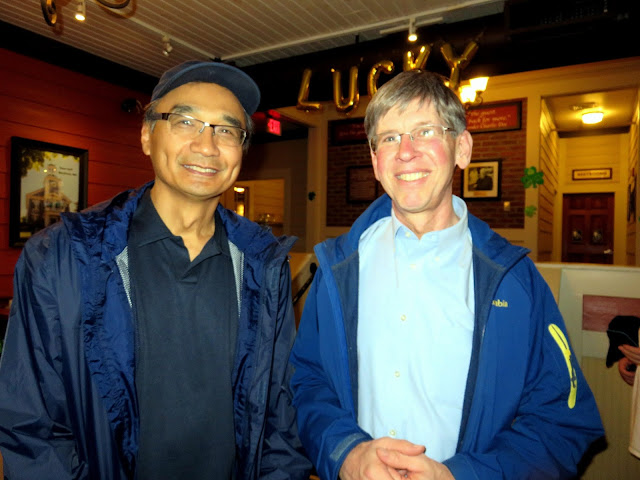 After another day of trade show we returned to Pittsfield, riding through some glorious countryside as we abandoned the turnpike for one of the quieter routes. 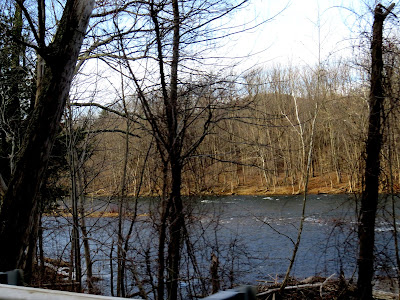 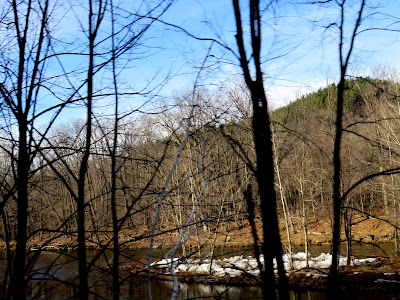 We passed through the small town of Lee where I was finally able to capture this church in a drive-by shooting. I've been trying for years but the sky was right and so was the camera! 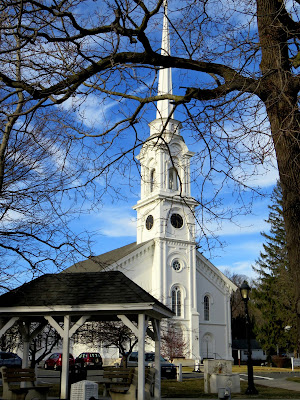 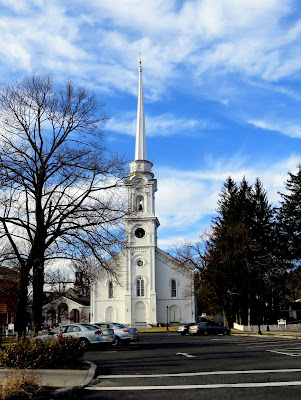 Randy and Elaine invited their good friends Tim and Nancy for dinner and it was another delightful evening with much laughter and camaraderie. 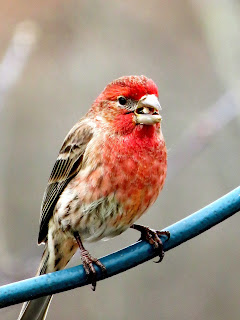 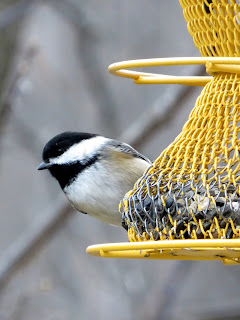 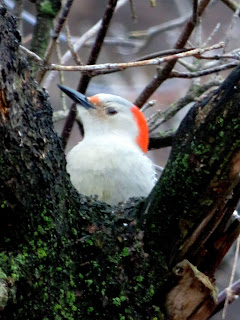 I would be remiss about talking about our visit without mentioning the birds! 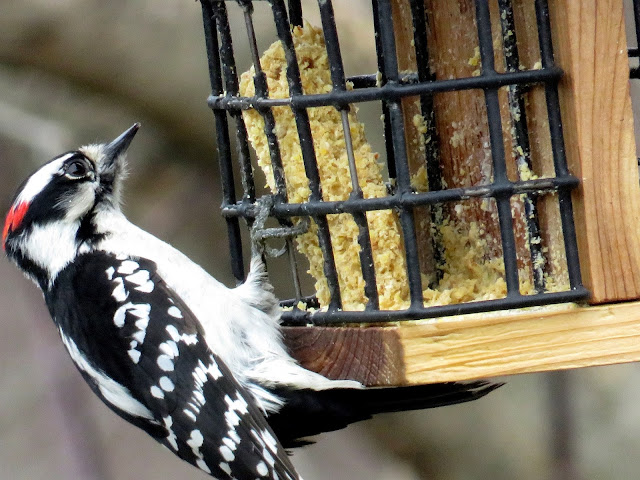 Randy and Elaine have a wonderful deck and many bird feeders. They attract a wide array of birds and I couldn't stop photographing them! 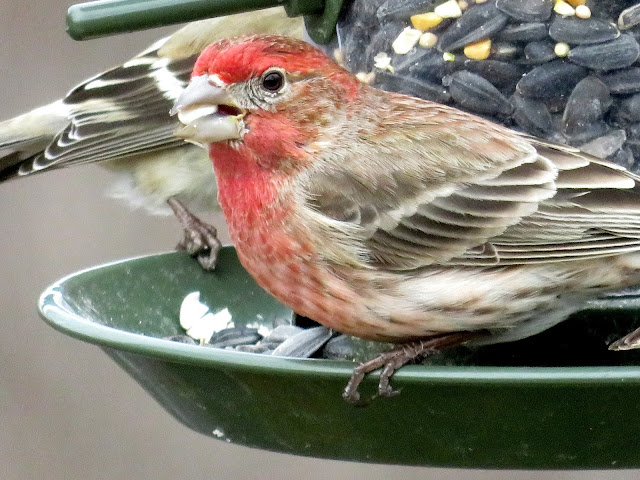 One disturbing thing was the prevalence of a disease affecting many finches, notably in the northeast. It's a mycoplasmal conjunctivitis and is caused by a parasitic bacterium. The eyes become red and swollen. Apparently the disease is contagious, at least among finches. (For more on this visit HERE.) 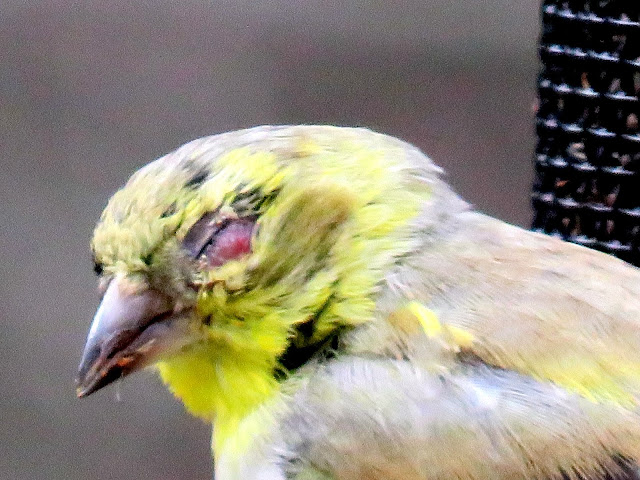 Apparently after pet stores stopped illegal sales of finches, the birds were released, bred and the disease spread. There are concerns as to how far west it may have spread since it crossed the Rockies in 2006. 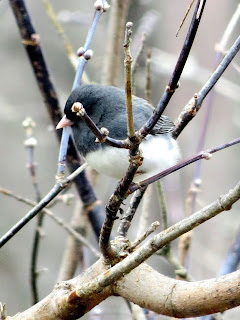 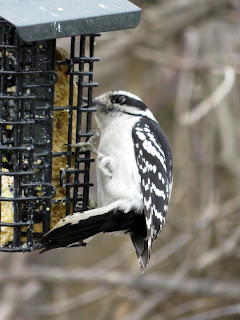 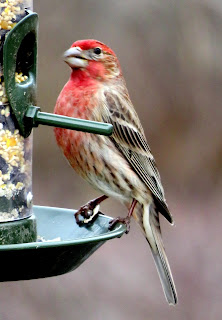 Nevertheless, the birds are still lovely to watch, though this is a bit disturbing. 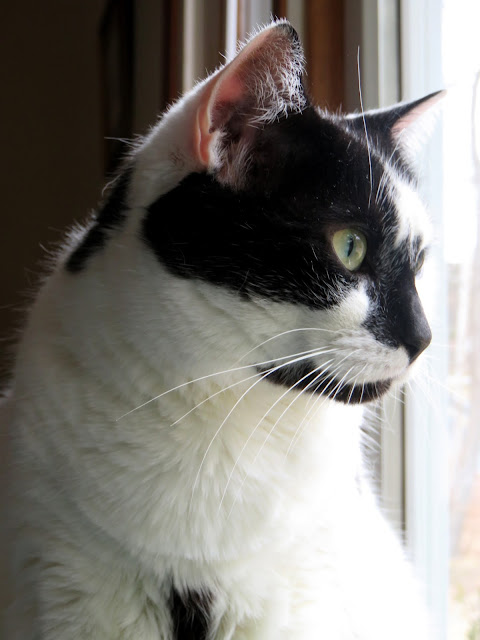 And it's clear that Daisy is watching, too!
Posted by Jeanie at 2:27 PM

What a glorious trip you had, dearest Jeanie, filled with emotions and so many lovely things to remeber !
I love both Daisy and Pickles, and I'm so sad for the desease affecting birds, I hope they can recover !

May your Easter be blessed with Peace and Joy, sweetie, I wish it to you with all my heart !

Looks like a lovely trip, Jeanie. It's nice that you both ave your favorite thing to do while traveling. I had not heard about the disease of finches and have no sign of it at our feeders. Poor things. I do hope they recover. Lovely to meet your family's cats. Cute names. Hope you enjoy a love-filled Easter. Sending a hug, Deb

what a wonderful trip this must have been...enjoyed all your pretty photos

You sure do get around missy! How lucky you are to have such experiences and to view different parts of the world.

The photo of the church is picture-post-card-perfect! :-)

It looks like a wonderful trip! Pretty cats, friendly people, birds galore . . . Poor finches! I hope they can recover from this.

What a fabulous set of photos. It sounds like you and Rick are having a wonderful time! I didn't know about the eye problem with the finches. It is so disturbing especially when they can't just go get help. So sad.

Awe I love a good road trip Jeanie!
How lovely for you both to spend time with Ricks brother and then meet up with Gene!
It's a very sad state of affairs with the finches.
Happy Easter
Shane x

HI Jeanie! Oh, more fun days! So nice for your hubby to meet up with his friend and brother. Sounds like so much fun to travel around. We love to travel too! Oh, the little birds. I'm so sorry to hear about this disease the finches get. You've taken some great snaps and little Daisy is just adorable! Was that Lee, Mass? We were there yesterday!
Be a sweetie,
Shelia ;)

How sad for the finches. Birds are so beautiful to discover when you travel, as often there are those you don't see at home. How wonderful to meet new friends. And that church is photo worthy for sure.

YIKES, DAISY! Now, you be a good kitty and leave the finches be! teeheee

JEANIE! What a tour! Love that steeple and the shots of the birds, so inviting of spring. My friend, I wish you much happiness as spring unfolds its wings to take flight. HAPPY EASTER!

Everything else about your trip sounds like it was amazing though.

Oh Jeanie, what a wonderful trip for you two. The scenery along the way lovely, except for driving through the rain. It's always nice to connect with family and friends. Lovely pics of the birds, but it is terrible they have a disease that is spreading.

Good Morning,
Another newsy, interesting and vivacious post that I thoroughly enjoyed reading this early Saturday morning.
Oh so true the yin and yang and yet the two do keep one another balanced don't they? So glad that trip has gone so well.
Stunning photos of the steeple and I am charmed by Pickles and Daisy!
Goodness these sad little birds, so happy that they are being looked out for with abundant food.
Happy Easter my dear!
jemma

The Berkshires is truly one of my favorite places in the world. I loved living there (in Great Barrington) and miss it. Sorry to hear about the poor finches. Love your photos.

Wow, I can really see the resemblance between Rick and his brother! I love that you guys were able to reconnect with several people that you hadn't seen in many years and that all of those reunions were so much fun! I also loved all of the pictures of the birds! You were lucky to see so many different ones. But how sad to hear about the spreading disease impacting them. :(

I hope you have a very happy Easter!!!

I need to come back and read more this sounds fabulous. Thank you for the lovely cards and the card. I would write to you on Yahoo but it is having issues and will not load. The cards are so pretty-I do like all the photos. It is bedtime and I am up early for a ride so I will revisit tomorrow.

What a lovely trip! I loved their cats and the birds. Thanks for sharing!

So glad for your happy travels.
Rick and his brother look so alive....easy to see they're kin:)
Thanks for taking us along.
Those kitties, that sky-kissed white church, those birds.
It's a beautiful world:)
Thanks for bringing it to us,
Jennifer

What a wonderful trip you had. A couple of years ago I met a couple who had been high school friends of my husband. It was the same thing--I felt like we'd been friends forever. Now through the magic of Facebook we keep in touch, and I can hope we'll have another chance to spend time together.

You got a great shot of Daisy! I've been trying for years. Happy to read about your travels in the homeland. Lots of love from Minnesota!

What an exciting time for you. Question. A church and drive by shooting? Am I understanding that correctly?

I am glad you had such a lovely trip. Thanks for taking us along!

Happy Easter!
Be a sweetie,
Shelia ;)

I love hearing about your trip East,
of laughter, commaradarie, yin, yang, old friends, family . . .
Sad about the Finch eye disease . . .
concerned for the "little ones!"
I need to read up more, and scope out our Finches who visit daily!
Happy Easter . . .

Oh my, I think I may have to look into the kind of camera you have purchased. BEAUTIFUL photos, Jeanie. Love the church, and all the birds. But I have to ask - Geneva, NY? My father's family is from there, and Auburn and Waterloo, where our family plot is. It is beautiful countryside, and we used to visit my grandparents during the summer. My dad used to sail the finger lakes. You brought back some memories!

You had a wonderful trip. You are so right about the yin and yang become most apparent when one travels. I think one must go on a road trip with a close friend or lover before deciding how close the relationship will become. Difference come out on such trip. I'm happy that you and Rick have figured out how to get the most out of a trip taken together.

This was such a nice post. I loved the photos of the birds, the church, and of course of the people along the way too.

I can't believe HOW FAR BEHIND I have gotten reading your posts. I am ashamed that I have been so busy and would be remiss if I didn't apologize for missing them.

This one begins in familiar fashion, where I often drive through rain similar to what you experienced.

Really enjoyed the photos of Rick's family and friends. You say you have trouble meeting people, but I always see you smiling and having a good time in the photos.

Speaking of photos, those church photos are incredible. I'd have to frame the one. Your camera has really come through for you.

How sad about the finches. I've not heard about this before, so it was a shock that pet stores would do that. And it's sad for the finches, too. I assume it's fatal.

I had to laugh because a few days ago I was sort of listening to Jeopardy! when I heard the answer to a question on architecture was Edith Wharton. What an amazing coincidence.