One of the best things about traveling is that wonderful encounter with an old friend or a new one, and Rick and I both managed to maximize that one! The first occasion occurred in Geneva. While Rick was working with a client, I had the opportunity to connect with my friend Cathy, who last year moved from San Francisco to upstate New York. 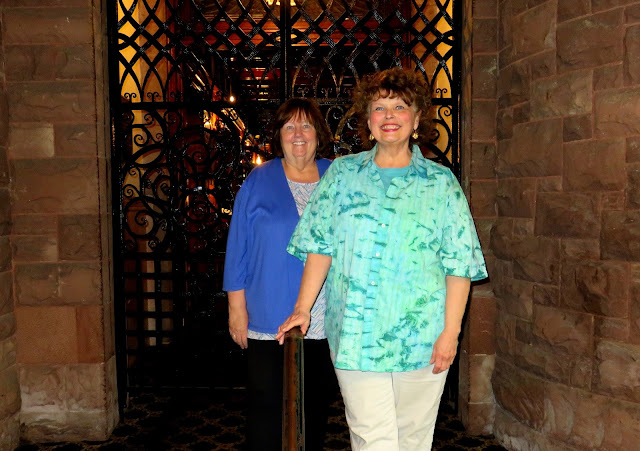 We hadn't seen each other in 18 years, so it was fun to touch base in person. Cathy met me at the hotel and it was back to Belhurst for breakfast and some photos. It was fun seeing this spot in the day time! 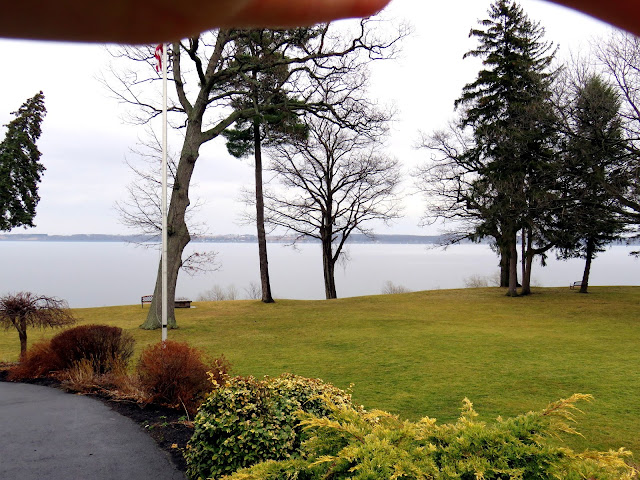 Then we went off to Ventosa winery for a bit of tasting. (I don't usually do wine tasting right after breakfast but we stayed at Belhurst a very long time catching up on life!) 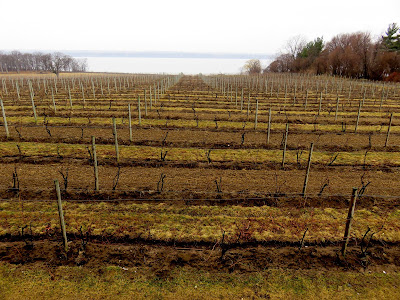 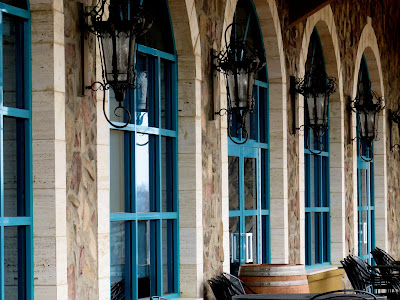 Our time together wasn't finished though. One of the crown jewels in Geneva is the Smith Center, a beautifully restored theatre located in the city's downtown. 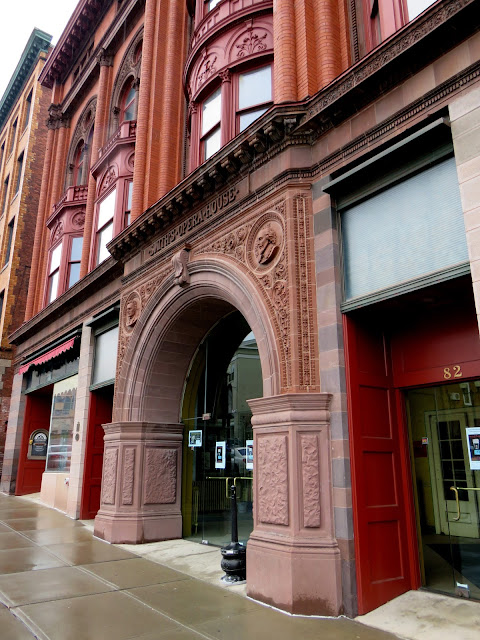 I am a sucker for restored theatres and this one didn't disappoint. Neither did the Smith's business manager, Jessica, who took us on an unscheduled tour of the auditorium. 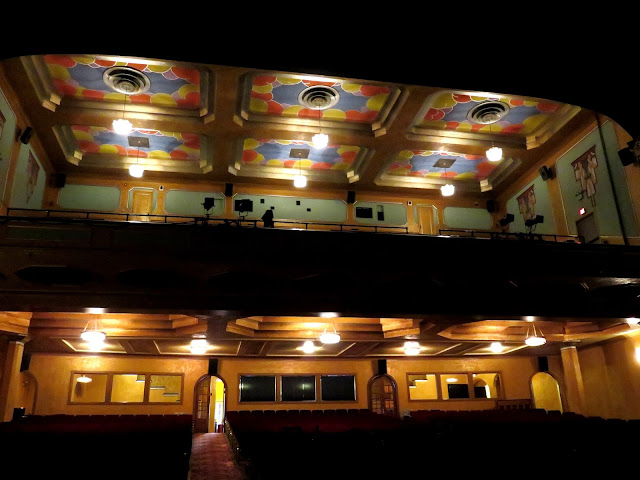 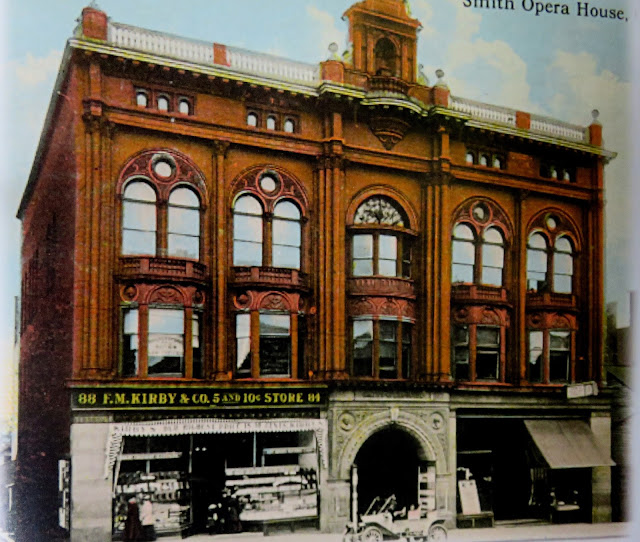 In 1929 it was renovated as an "atmospheric" movie palace, combining Baroque and Victorian decor with twinkling stars on the ceiling, Like many theatres of the period, it fell into decline in the 1950s, a victim of home television viewing and eventually mall multi-plexes. It closed in 1978 with many structural problems including a leaking ceiling and failed heating system. 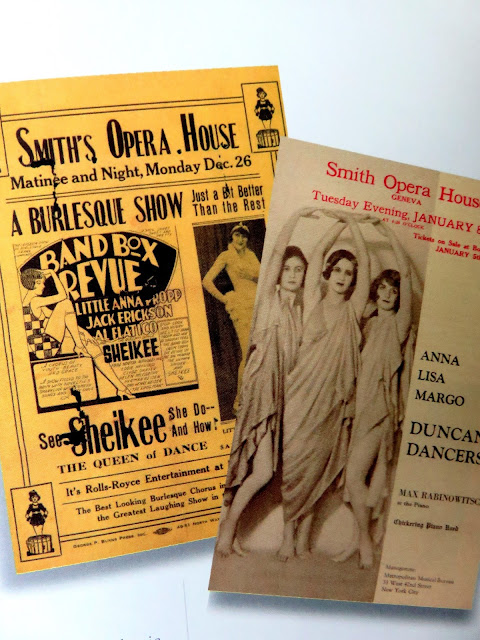 But by the 1980s, a group had organized to save the theatre, which was painstakingly restored to its original 1894 facade and 1931 atmospheric interior. The complicated and expensive restoration began in the 1990s and now the theatre welcomes traveling musical acts, theatre and other performances, along with the occasional film. 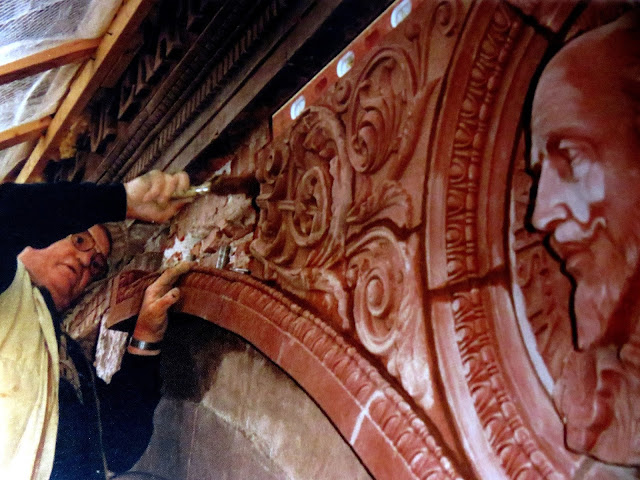 The auditorium seats 1,500 people. Along the sides are some splendid gold panels and sculpture. 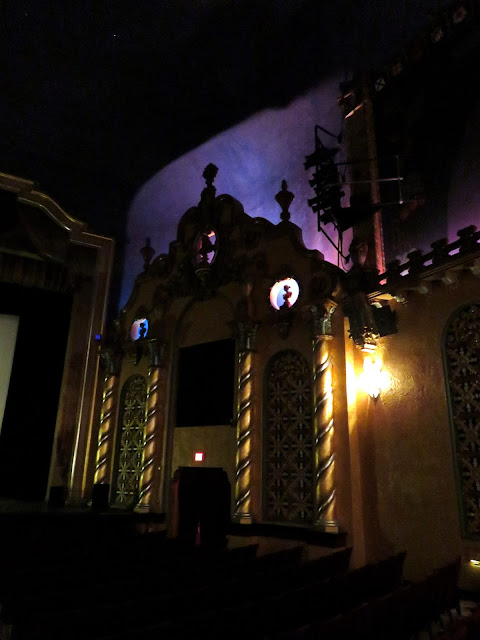 The overall look is dramatic, as one might expect from a theatre and the details are exquisite. 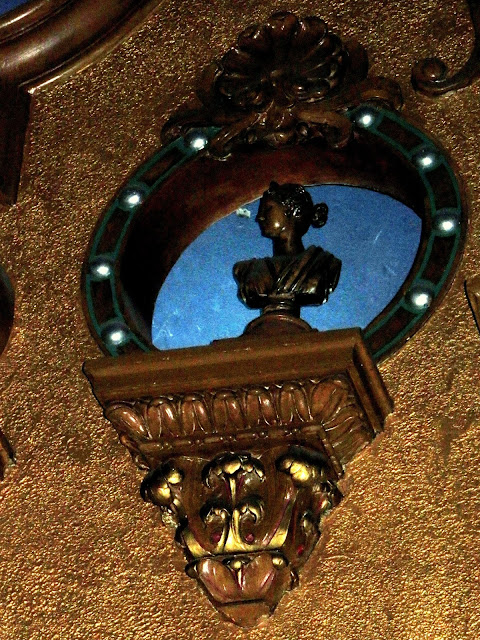 I was particularly fond of the sculptured busts in the side entry ways. 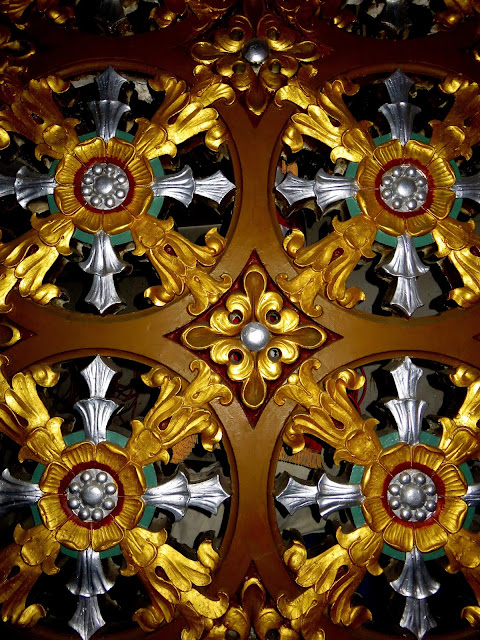 Here's a closer look at some of the gold work. 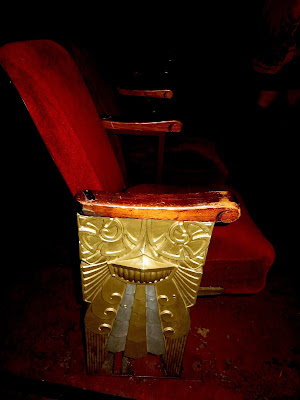 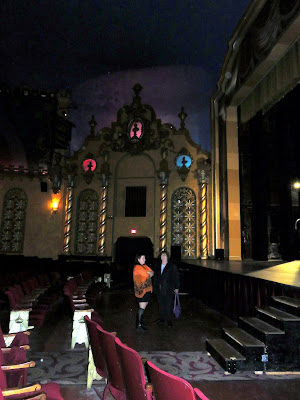 Even the ends of the seats sported the gold medallions. 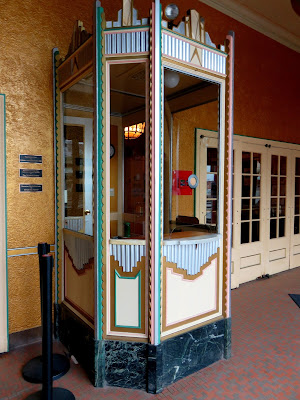 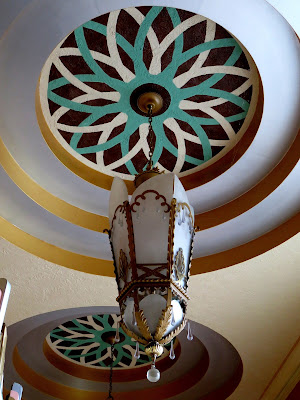 I was equally impressed with the box office in the front lobby. 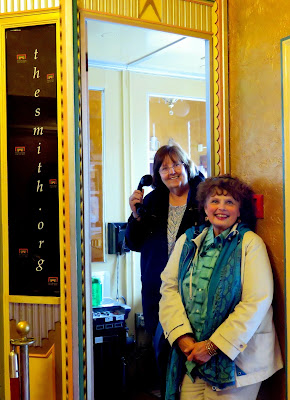 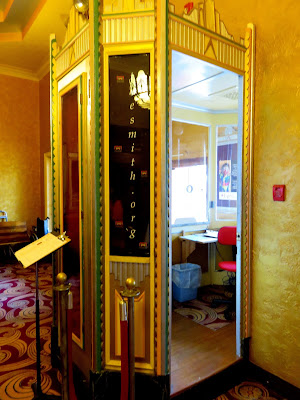 Jessica snapped Cathy and me goofing it up there! 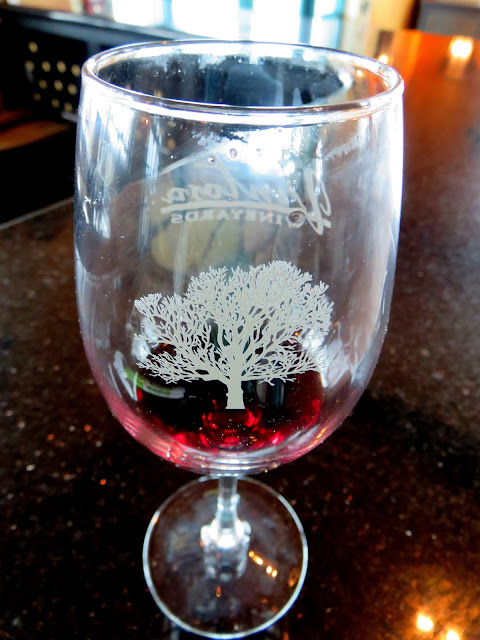 After leaving the Smith and stopping in a couple of the town's shops, it was time to say farewell to Cathy and head toward Massachusetts. A toast to old friends! And yes, we've something else to anticipate in Massachusetts besides again seeing Rick's brother and sister-in-law. Another reunion with a long-missed friend would wait there -- this time for Rick!


And on a completely unrelated note, I am currently contributing to a wonderful new online magazine, Modern Creative Life. Check out my article "What's Next" HERE.
Posted by Jeanie at 4:13 PM

I have that special feeling for old theaters, too. The details are wonderful, and you cannot beat the atmosphere. Thank goodness for the interest of people who want to restore and preserve them. You look fabulous in that green blouse, dahling! I hope your toe is happy soon.

That certainly was a great stop. I enjoyed looking at the beautiful theatre – how wonderful that it was saved. I also liked your stop at Belhurst Castle. You know how much I like visiting historic places – these two are enchanting.

How nice to meet with friends along the way. You've got some great photos. The historic theatre is quite special.

The craftsmanship from back then....OH how I could just spend days walking around, silently observing all the details! FUN!!!!!!!!

How nice that you were able to connect with an old friend during your road trip!

I'm glad the theatre was saved and restored; I love it when they restore old buildings like that.

Such a lot of beauty and fun and friendship too!
oxo

Jeanie, Such a great restoration to this old theatre, it's beautiful! Always nice to meet up with friends and catch up. Looks like you two had a great time doing just that………...

I was just chatting (texting) with my cousin that we must do another road trip together. This time I fly out to NYC and she meets me there then we both drive back to her home in Kent, OH.

That is awesome that you got to reconnect with a friend that you hadn't seen in such a long time! It sounds like you two had the perfect day together. That theater is so beautiful; I am glad that it was restored to its original beauty as it is such a gem!

It's really interesting how the restoration of this theater parallels that of the Grand in Galveston. Even the history's the same -- movie theater to meet the changing times, etc. What a wonderful way to spend some time -- and how nice that you got a personal tour!

Time with old friends is the best! I had a little of that this week too. :)

Long friendships are so special to reignite with a face to face visit. How wonderful for you. That theater is just gorgeous! Thanks for sharing it with us.

What stunning places you've visited, sweetest Jeanie, and I wonder your joy visiting this wonderful City together with your friend !

May your weekend be filled with love and joy, dear friend,
sending gentle hugs to you,
with much thankfulness
Dany

What a beautifully restored theater. To tour it with a friend was an extra bonus.

I'm sure you had a great time with your friend and how beautiful the old theater is! Thanks for popping in to see me and I would love to have you and your hubby for dinner! ;)
Be a sweetie,
Shelia :)

I love restored theaters and restaurants - a great connection to craftsmen and artists from the past.

Oh Jeanie, what a beautiful old Theatre.. Right up my alley.. .I love the photos.. And to share with a dear friend. How wonderful.
Thank you for taking me along..

It was such a joy to see you had come for a visit.. So happy you enjoyed the roses.. The Mother of Pearl rose does not have a strong of a scent as the English roses do but it is lovely.
blessings,
Penny

such beautiful finds, lovely images.
sounds and looks like you had a wonderful time! So happy for you.

You and your new camera are well-matched. These images are terrific, Jeanie!
XOXO
Maryanne

Your reunion sounds delightful and so happy for you to be published in an online magazine.

What amazing and wonderful photos. I especially love the restored theater!!

JEANIE! Thank you for coming to visit my Easter eggs and home! I JUST LOVED YOUR COMMENT: "....to DYE for!" teeeehehee

Not sure how I missed this post, but this theater is without doubt, both impressive and distinctive. The beauty of the theater was matched by the beauty of the photos you captured in your new camera. They are both GOLDEN.

I have a friend like that. No matter how long we are away from each other, no matter how many miles have been between us, it seems like we pick up quickly and the years simply melt away. That's true friendship.

I fear I'd not be able to drink the wine, though, since I'd be on the floor before my fourth sip. Yep, I'm that much of an alcohol lightweight.

I have not been to Geneva since I was a young girl, and I have no recollection of this lovely theatre. I hope to visit again some day, and will definitely check it out. Beautiful!