If I Ruled the World and Other Musings

If I ruled the world... and other thoughts. 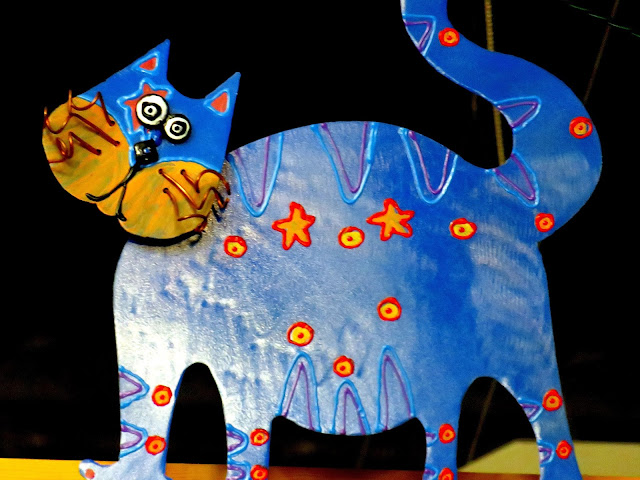 
If I ruled the world, everyone would check out Modern Creative Life, which goes live on Tuesday, March 8. It's an online magazine dealing with creativity in the broadest sense of the term, creative people and everyday life pulled together by the remarkable Becca Rowan (who explains it HERE -- take a look!) and Deb Smouse. I'm pleased to say I am a contributor, so pop by and check it out! 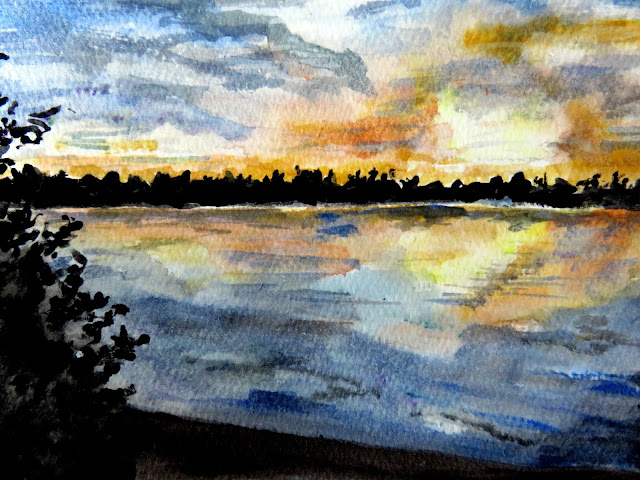 Speaking of creativity, a feeble attempt at a sunset. Yes, I will be doing it over, as I continue my quest from my last painting post!


If I ruled the world, debates would not get out of hand. Listen, people in the networks -- you have an on-off button for the microphone. So, here's the deal. Candidate speaks for given time period. All other mics are off. Then each candidate has the opportunity to comment for given time period. After the first warning bell, they have time to finish the thought, then the next one gets to speak. Down the row. All mics off except speaker. You can interrupt to your hearts content and no one will hear.


Girl Scout cookies are addictive -- but they aren't nearly as good as home made! (The recipe for these calls for leftover cooked oatmeal! Who knew?!) 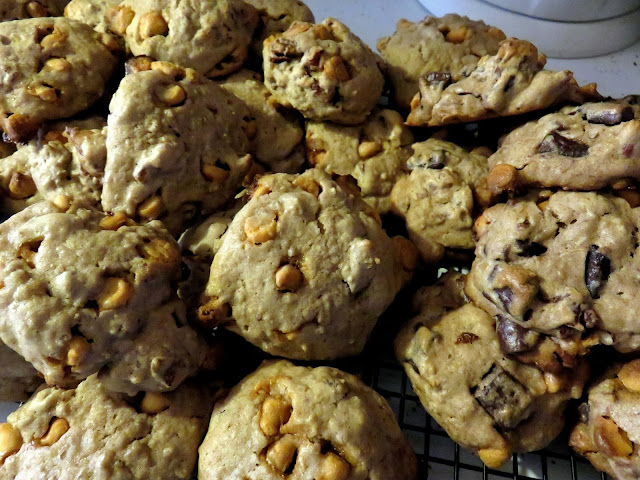 
If I ruled the world, small appetizer plates for $12 would have more than two (albeit jumbo) shrimp, one teeny fried oyster and one teeny fried tomatillo. Even if it is a lovely restaurant and the food very good. 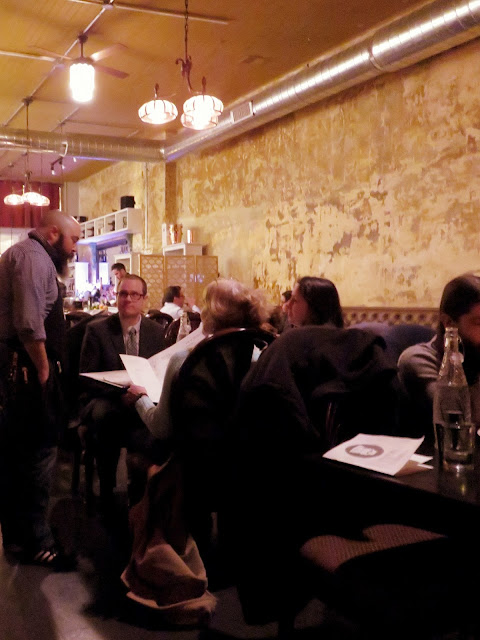 (That said, the beignets for $5 came in a pair -- and when the waiter overheard me telling my friend to order dessert for her birthday, he gave them to us free.) I'll go back -- but pass on the shrimp!


If I ruled the world, everyone would have a copy of Vivian Swift's wonderful new book, "Gardens of Awe and Folly." 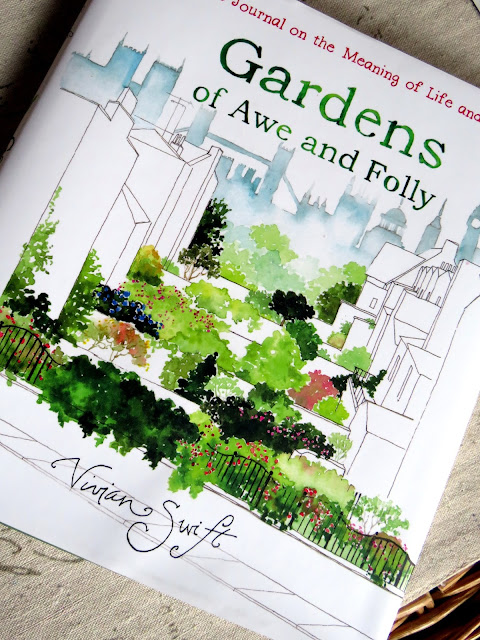 My back-ordered copy arrived last week and I gently turn each page, admiring the illustrations and equally admiring her captivating text -- as informative as it is fun. 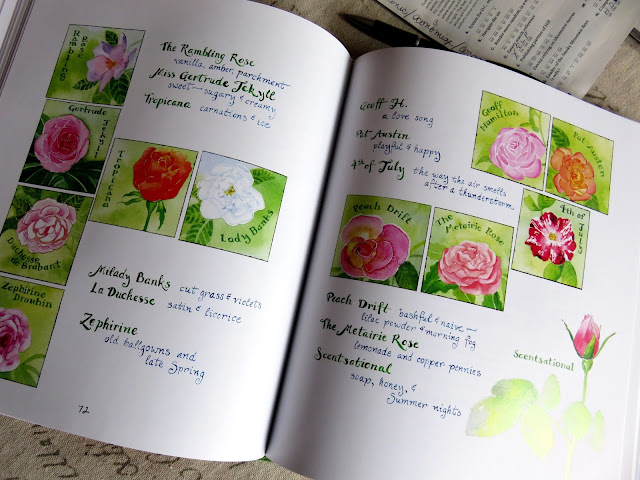 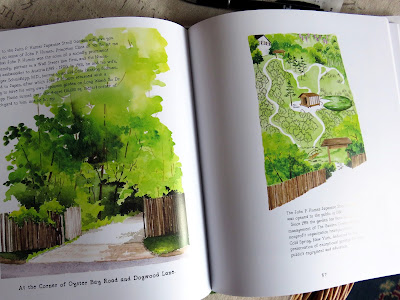 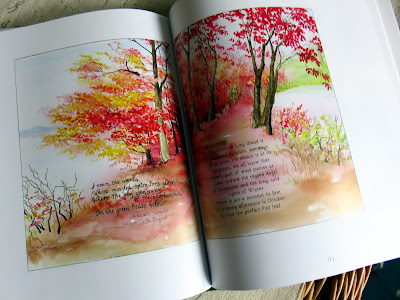 
As I write this, we have plenty of snow. By the time it's published, who knows? If I ruled the world it would be spring to stay! 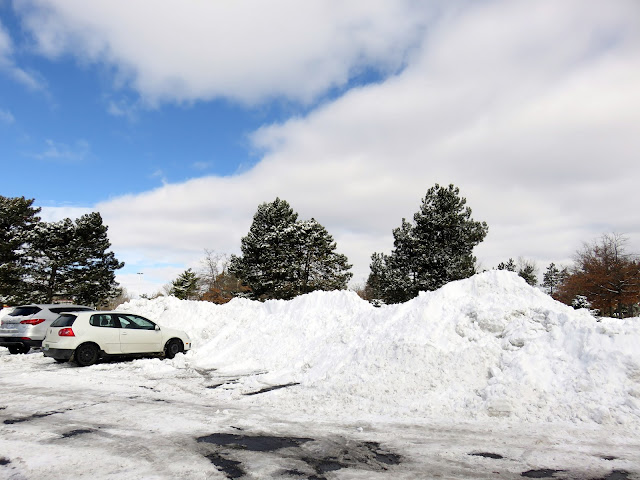 It's been an odd winter and for once, I'm not complaining about the snow because even though we get a ton at a time, it doesn't stick around very long. That said, it'll be awhile before I plant any flowers!


If I ruled the world, I would be more like Lizzie. I'd leave the dishes where they are and just sprawl out and play. 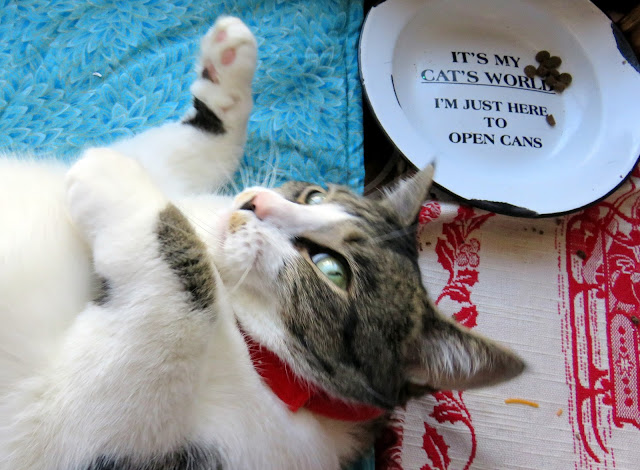 Well, no chance I'll have a maid to pick up the kitchen, so I'd best get over that one! (Lizzie and I are having a disagreement. She seems to think she's the Dowager Countess and I am her maid. I seem to think it should be the other way around.) 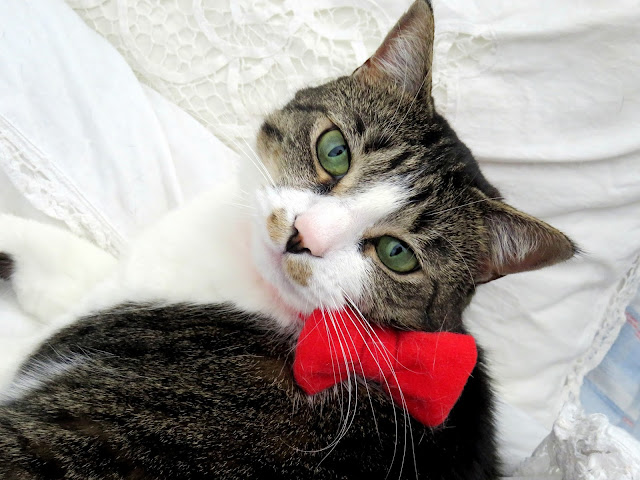 I've been running behind on visiting and comments and probably will for the next crazy week, so please know I'll be by soon!
Posted by Jeanie at 1:50 PM

Email ThisBlogThis!Share to TwitterShare to FacebookShare to Pinterest
Labels: musings

I vote for you to rule the world, Jeanie--I like your ideas! But you might as well give up on Lizzie being the maid. You should know better than that by now. :-)

OK by me if you rule the world.

You have my vote only if you allow us to have 4 seasons that are not too hot or not too cold, but just right, like Melbourne weather was before we started to harm our planet to the extent that caused its climate to change. Hugo, our cat, would also give you his vote if his continued pampering were be mandated.

How can anyone with a cat believe that they could rule the world? Never mind, don't answer that. (And note that I used the word of the year, singular THEY.)

Tell me how you "fully expect the universe to co-operate." I would love to hear all about it.

Your cat is beautiful!!

Beautiful post! Love all the photos except umm you know which ones. But it's only me so no worries. That sure is a wonderful book. What beauty! And snow? That's what we don't have this past month, even further up north here. I'm slowly starting to return to the blogosphere after o what a month. Love that Downton Finale. Your take? Hope this comment will go thru. I'm using my iPhone to type this.

Personally, I don't want to rule the world... It sounds like too big of a responsibility. Plus, I bet the ruler of the world would get the blame for anything and everything that went wrong with the world every single time... That's a whole lot of things to get blamed for! So, if you want to rule the world, go right ahead... I certainly won't stand in your way. I think Lizzie might though...

That book looks delightful!! I bet my mom would love it as she loves gardens! I'm with you on the debates. It's ridiculous how chaotic and out of control they are. I actually can't bring myself to listen to them because it frustrates me too much!

I hope your snow melts soon - ours is all gone!!

Jeannie, If you rule the world you have my support. I like the way you think. Love the pics and book and I'm off to check out the creative link, I need some inspiration.

It's always such a cheerful moment to come and visit you here, my dearest Jeanie, I so enjoy every post of yours, thank you with all my heart, sweet friend !
Have a wonderful remainder of your week,
sending much love to you
witrh sincere gratitude
xox
Dany

I say yes to eternal spring and all of the above.

Lizzie has gorgeous eyes. How can you resist her? I see you have been blogging as little as me. I just cannot seem motivated to blog.

Thanks for the link to Modern Creative Life. I jumped right over there and will return to browse.

I'm with you about the debates. The moderators will never do that, though, because they like ratings and chaos begets ratings. I'm so cynical.

I think the world would be a better place if you ruled it. :)

OK -- with that off my chest, I have to say your sunset is quite wonderful. I know how difficult it can be to keep up a regular routine, a "practice" if you will, but it certainly is the best way to improve, and I see real improvement in your already great art.

It amused me to see beignets mentioned, too. Yesterday a friend and I were discussing them, and what it would take to get to Café du Monde to have some with a nice cup of French roast. I pointed out that Breaux Bridge is 150 miles closer -- am I tempted? Oh, yes!

Have a fun week!

I like the ways you would rule the world.
Have a nice day!

If you ruled the world dear Jeanie the world would be a happy, colourful, warm, fun place - you have my vote!!!
From the gorgeous Cheshire Cat to beautiful Lizzie this is a great post.
I agree with your debating rules - hear, hear! One voice in particular is really annoying me at the moment!
Love your sunset - wonderful colour - what fun you're having!
Shane x

such a fun kitty.
i think your sunset is wonderful. really a lovely feeling to the way you used paint and colors.

sweet weekend to you.

I wish you ruled the world. Oh that Lizzie! They can be quite demanding and don't help at all. I am blaming my Joey right now because I lost my car keys and wondering if Joey decided to hide them. Hummm? Glad the dessert was on the house for the birthday.

I'm simply THRILLED that I've only missed two posts. I feared you had forgotten who I was, since I've been so very busy lately.

I agree about the political debates. I watched about 10 minutes and gave up. The yelling over each other was disgusting. I like YOUR idea of a dead mic!

We've had practically NO snow this year, so I enjoyed seeing yours.

As for Lizzie, I fear both Bleubeard and Squiggles think of me as "Staff." But you have the right idea with Lizzie's bowl. Soooo cute.

Your sunset watercolor is beautiful Jeanie!
Politics right now has me embarrassed to be an American.
thanks for sharing your insights...I've had some catching up to do as I have been a bit more unplugged than usual trying to clear out stuff stuff stuff around here!
Happy Weekend to you oxo