Postcards from the Lake -- My Happy Place, Late July

Another postcard from the lake, where we are having a glorious summer! 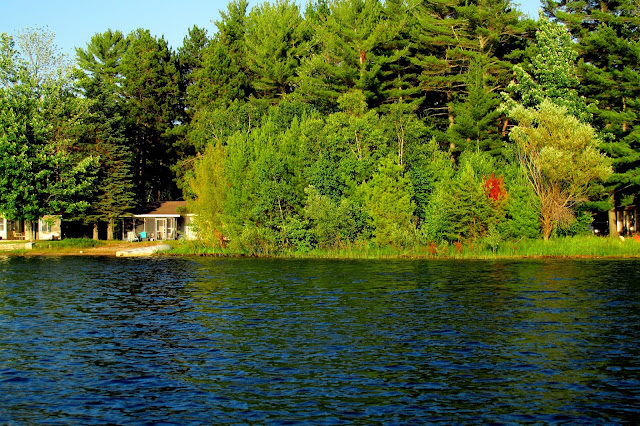 But first, Rick had his 60th birthday back a week or so ago. We celebrated all day, starting with breakfast in the morning down to a party at night. I'm so glad he's finally in my decade! 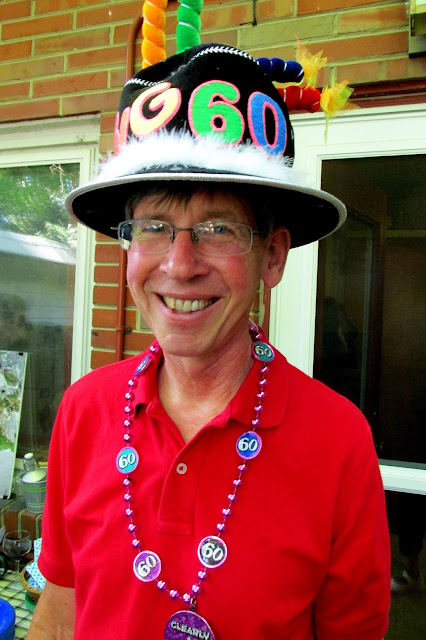 After all that, we took off for the lake. Of course! It was the start of a great few days that began with his distant cousin's visit. After a lovely dinner, we took off to check out the elk and fallow deer that live in the preserve near -- wait for it! Near the Gaylord Elks Lodge! 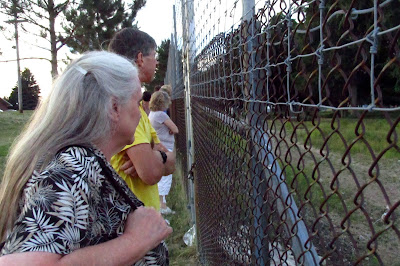 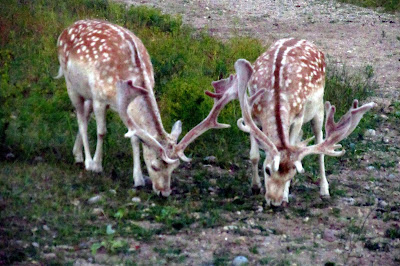 This really is a little hidden gem and its fun to watch families come with their kids. At dusk, in particular, the elk and deer move forward. I don't think anyone's sticking their hand in to pet them, but with a good zoom and a lens that shoots through the fence, one can get plenty of good pix! 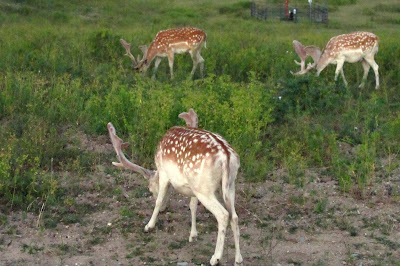 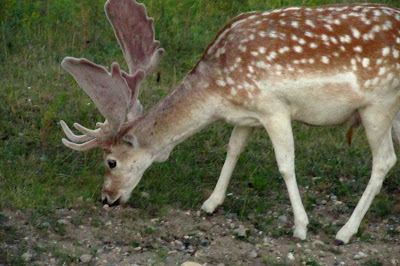 They took off the next day. Barbara headed on her journey and my fabulous biker-boy hit the road on his bike for a three-day bike-camp ride.This was his final training run. This week he heads from Lansing, Michigan to Ottawa, Ontario -- and he's not taking the direct route, but going far north and through Algonquin Provincial Park.I'll meet up with him in Toronto after a visit with my friend Suzanne in London. 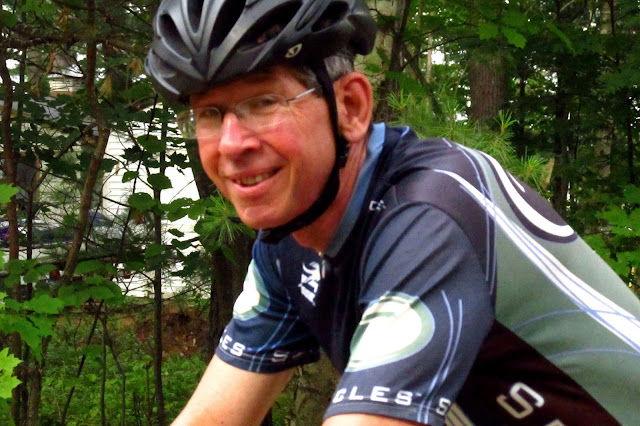 Anyway, he was loaded with gear! And the weather was perfect! 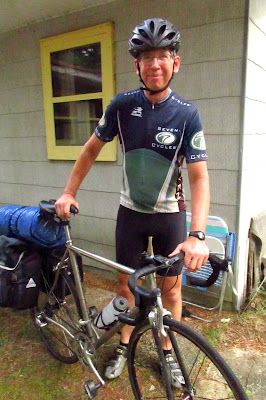 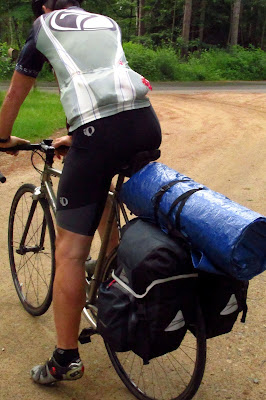 For me, the rest of the weekend included eating about nine pounds of cherries (OK -- a slight exaggeration! But it was more than a few!) 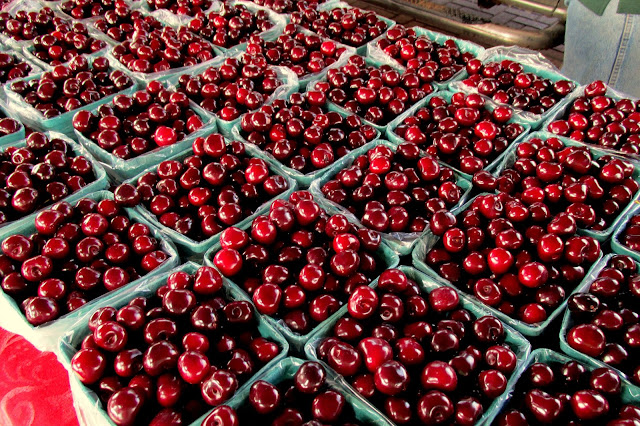 Lots of art of course. I fixed up Lizzie's face from the photo I showed HERE. It's very subtle but she has a bit of calico (a very little bit of an orange undercoat) and some by her eyes. It's amazing how much better that slight bit around the eyes and face improved the overall picture. 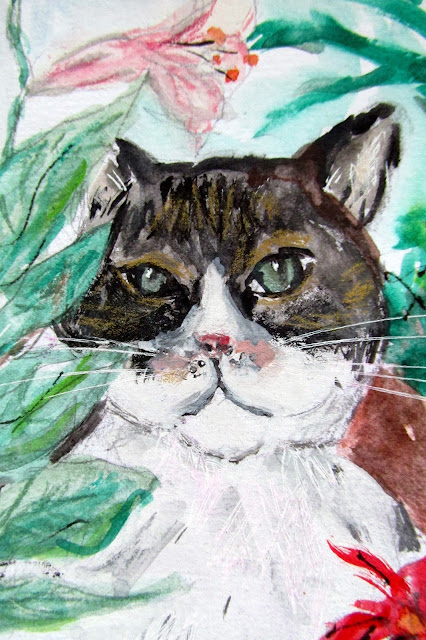 And did another version of my "cat in the window," along with the boxes I showed you in the last post. (Actually, I've added to this one since I took the photo, too!) 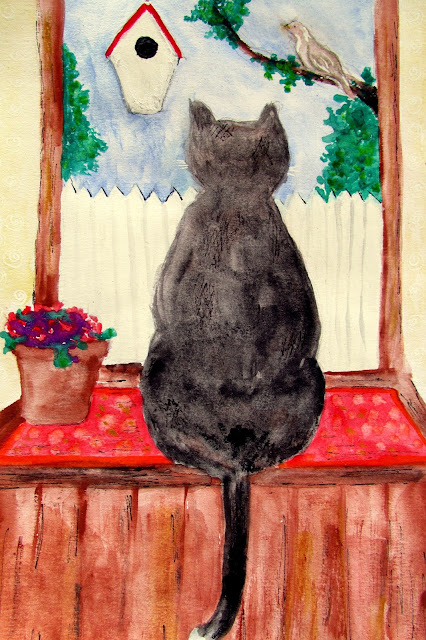 My cousin Mark brought his bride Katie to the lake. OK, they were married in October, so she's not a blushing bride anymore, but I figure she still has a few more months of that title in her! It was good to see the next generation enjoying the cottage! 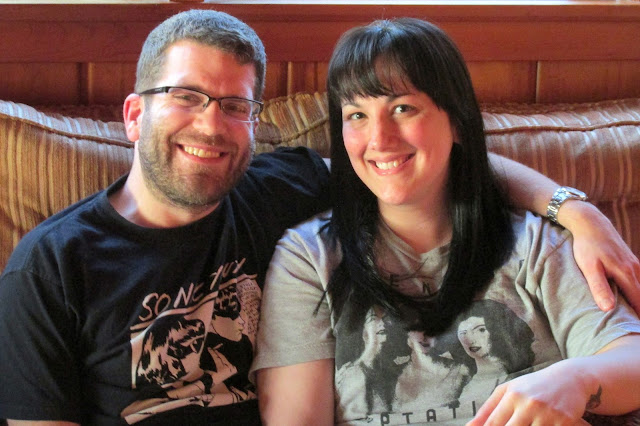 And of course I weeded the beach. My neighbor rototilled the massive amount of weeds out, but it's a daily chore just to keep up with it! Still, it's a large, lovely beach and worth the effort! 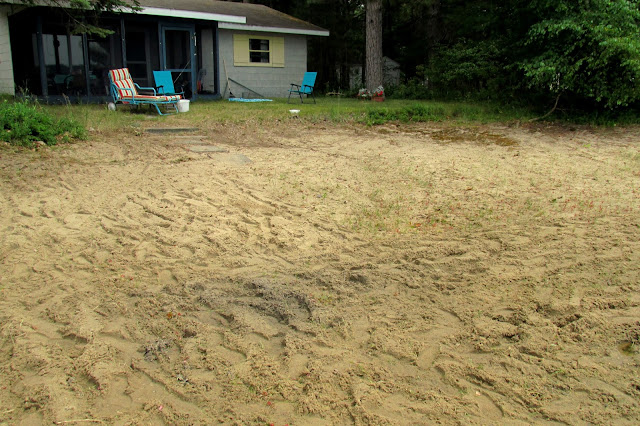 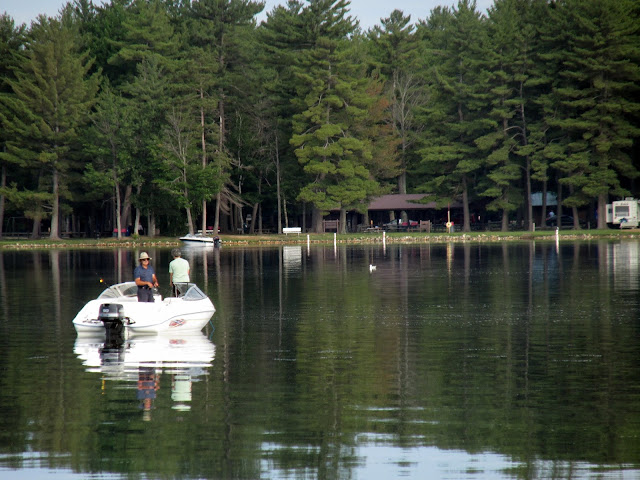 Warm, sunny afternoons. Hours of swimming in the lake, putzing around the house, finishing another three books. 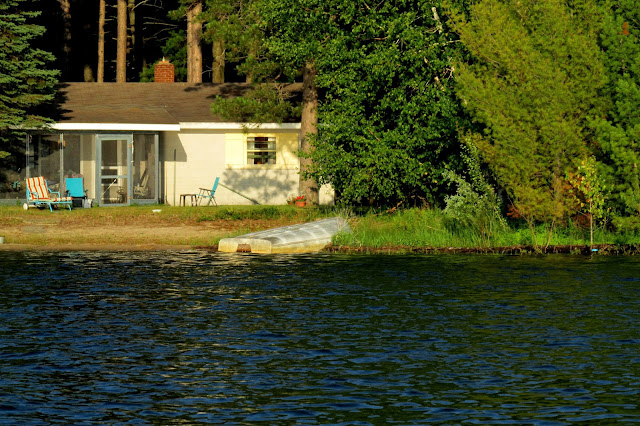 Life is good. And art camp with Kate is coming right up!

(Thanks for hanging with me this summer as I've done my best to keep up on your blogs but am slow to the party! Lack of 24/7 Internet means I actually do some productive things off the computer!)

For those of you following Rick's road trip, see brief updates on the right sidebar of the blog! He's having trouble with his blog, auto-correct, and such but is grateful for everyone's support. He's also having a fabulous time!
Posted by Jeanie at 10:19 AM

Email ThisBlogThis!Share to TwitterShare to FacebookShare to Pinterest
Labels: Otsego Lake, Postcards from the Lake, summer

Enjoy your wonderful time! Your pictures show the love and perfect moments of a summer spent well!

Man, who knew one has to weed a beach?
Paradise keeps us busy.

It makes me smile to know you are so happy. :)

So glad you are having time to read, swim, eat cherries, and celebrate. :-)

Your lake vacation sounds/looks awesome, Jeanie. That cabin is sure right on the water! Enjoy your time for art and the outdoors. Still thinking about Rick - I e-mailed him from his blog a couple days ago. He's probably thinking, "Who the heck is this!"

What happy photos! Thanks so much for sharing!

It sounds like an absolutely idyllic summer! Love the photos! And had to smile about Rick finally entering your decade (one I just left!). You're both such young souls!

Your summer sounds blissful and ideal! I love mornings at the lake when the water is like glass - it's so calming and peaceful! I'm taking a couple of days off next week so I can head up to the lake and spend time with my brother and his family - I'm so glad I'm able to swing that as I wasn't able to be there over the weekend due to other commitments.

Wow, you've got a great beach area! I am sure it's a lot of work to keep it free of weeds but I bet it's nice having such a large beach area!

Such a beautiful life you're living, friend.
Makes me glad to my toes:)
I love your art and the artful way you see
every soulful detail of your days.
Just a pleasure to come here. Always:)
-Jennifer

Your cottage is perfect! Great location and the best hub for family memories.

I was so impressed by your cherries. Ahh I just started salivating for a sour sweet freshly picked cherry. Hopefully we'll be able to get to our summer house soon so we can pick some berries and cherries too.

Your art is as always full of love. How adorable that portrait of the cat is.

haha... Rick looks like he's ready for some Mardis Gras party... LOL! Glad you had sooo much fun! Oh, how wonderful is that elk/deer preserve. Such beautiful creatures... Those cherries!! We've been eating cherries for weeks now--sooo good. I LOVE your kitty art!! Oh, yet let Katie enjoy that BRIDE title as long as she can. I like when men introduce their wives as their brides--it's so sweet. Your own little stretch of beach... BLISS!! Don't worry about being around... just ENJOY your lake time! :o) ((HUGS))

Lake or ocean, there is nothing like spending the summer by the water. OHHHHH JEANIE, what a darling little lakeside cottage. AND your kitty in the window and kitty portrait...just precious. My husband will be 60 NEXT MONTH! I however, have 3 more years to go until I hit super sixty!

Sounds perfect there... No wonder you call it your happy place!

What beautiful pictures !!! I love the cherries !!!
and the pictures of the cats !!! I wish you a wonderful weekend, Greetings from angie

How I laughed when I got to "weeding the beach." I suppose things are very different at a lake -- far more different than I've ever imagined. I wonder what other lake rituals there are that I know nothing about? A few, I'm sure.

I do think that bit of calico-ing improved the painting a lot. And those cherries do look magnificent. This weekend, our actual temperatures are going well past 100 - how I would like to have a cool lake to plash in. I stuck my feet into the water at the marina today, and it felt like bath water. No refreshment there!

Hello dear Jeanie,
Your lake is breathtaking! Such beautiful photos.. I feel relaxed already just looking at them.. The cherries look delicious! What a wonderful summer you are having.
Thank you so much for always taking time to visit.. Your words just warm my heart.. Sorry I am late in thanking you.
blessings,
Penny

I love your summer place. Those cherries look mighty good.

This item is on my bucket list: spend summer days in a cabin by the lake. Your post just makes me long for it more. Beautiful setting and glad you're having a wonderful time. And soon you'll be up in Toronto to meet up with Rick, that's marvellous. Trust he's also enjoying himself, and has come out from the thunderstorms unscathed. Don't worry, he's a strong athlete and I'm sure he is doing something that brings him much joy. Have a great reunion, and enjoy your Canadian summer! :)

Happiest Birthday wishes for a great birthday month and year for Rick.
You two are very good at celebrating each moment.
OH those cherries!!!
and the elk surely are lovely creatures (not something I have ever seen in real life...yet that is).
Your lake home looks oh so lovely.
oxo