It may well be July now, but this post takes us back to one of those gorgeous June days -- not too hot, not cold at all -- a perfect day for Cork Poppers to sit outside and sip California red blends. 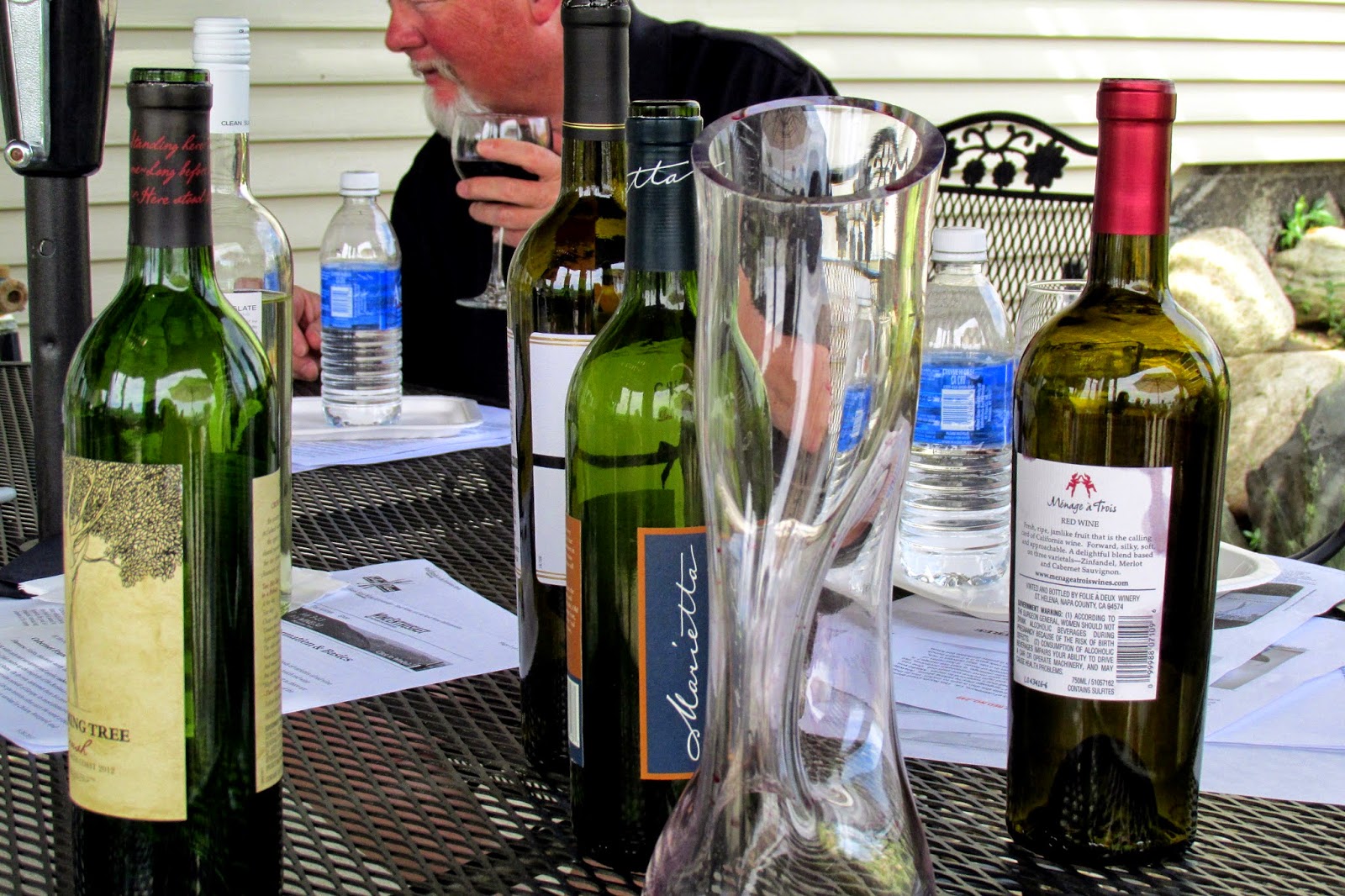 Our assignment was for each couple to bring a California blend. Since we are red drinkers, all of ours ended up red wines, filled with delicious combinations of Zinfandel, Cabernet Sauvignon, Merlot and Syrah. First up was Crush, a wine fronted by musician Dave Matthews, along with Steve Reeder. 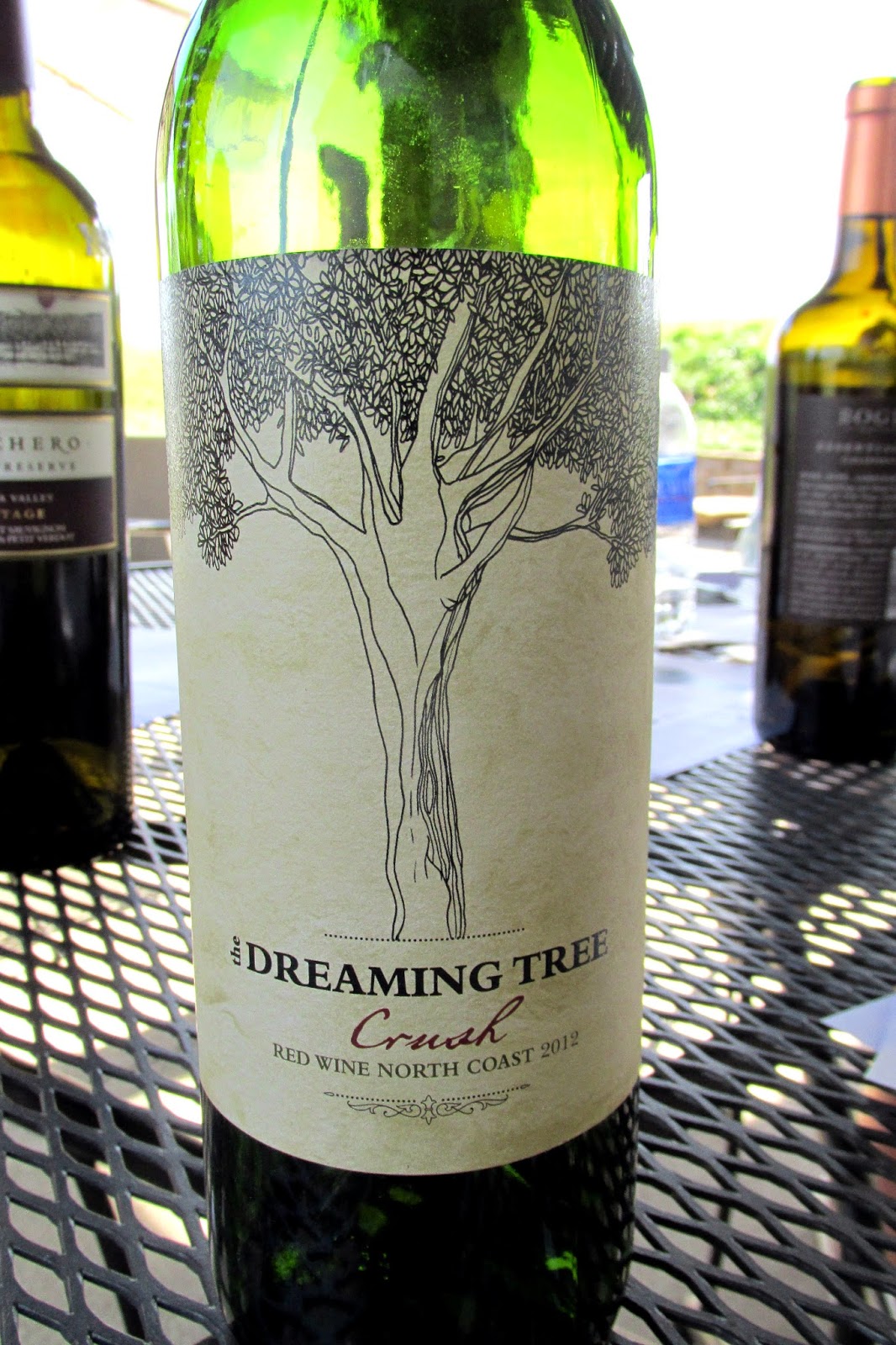 This was one Anne and Clayton found and it was delicious. It also cost a bit more than I usually pay, at $21.99 but Clayton said there are also sales on it and to watch for them. It's a blend of Merlot, Zinfandel, Petite Sirah, Syrah and other grapes. This was a 2011. Another feature of the Dreaming Tree wines (all of them) is that the company focuses on sustainability in creating their products.

Mike and Barb were up next with.Chloe. 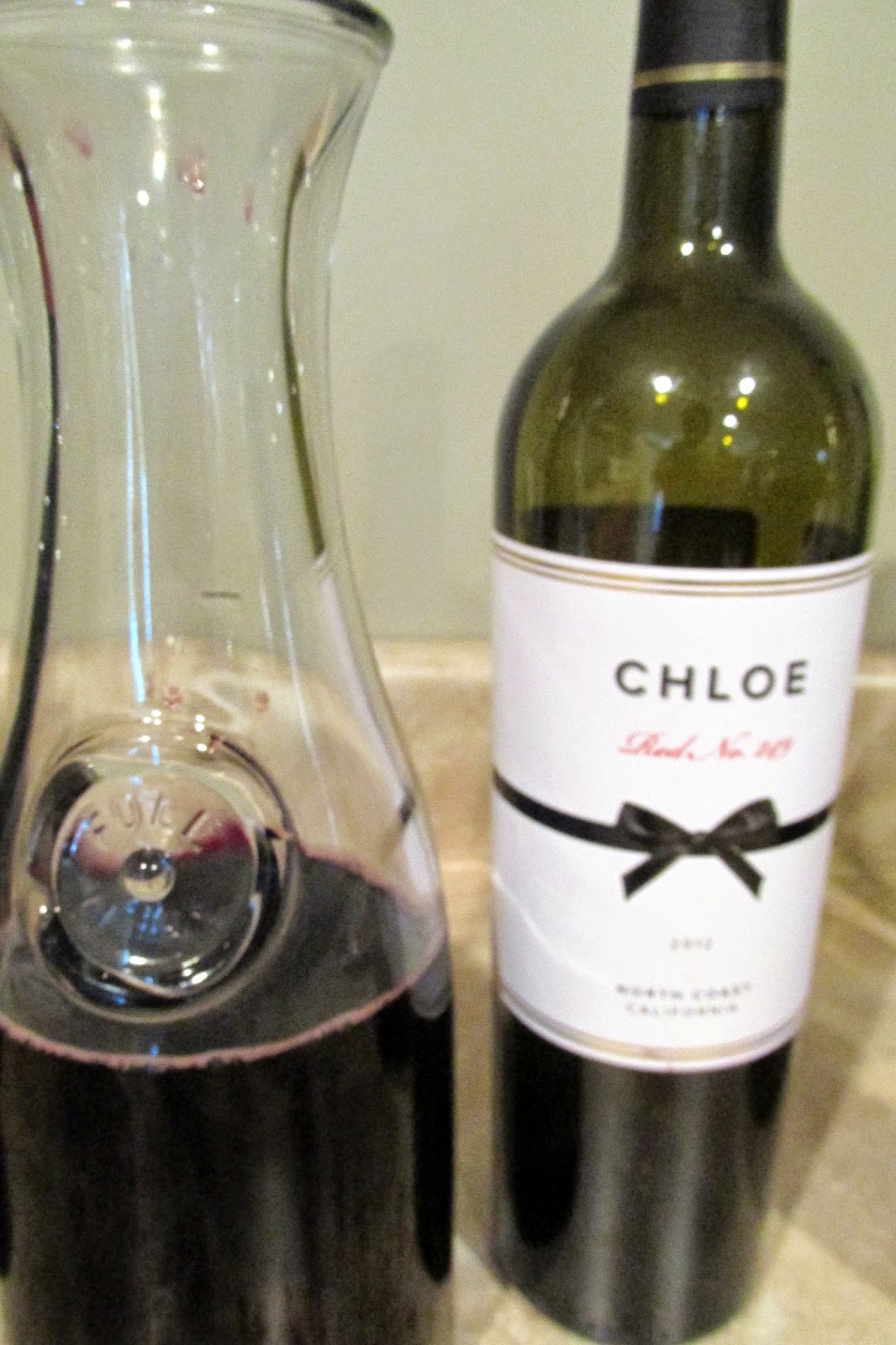 This was a combination of cabernet and merlot grapes and the vintage we sampled was 2012. We agreed it should have been decanted before, as it got better as it sat out a bit. But it also wasn't as mellow as the first. 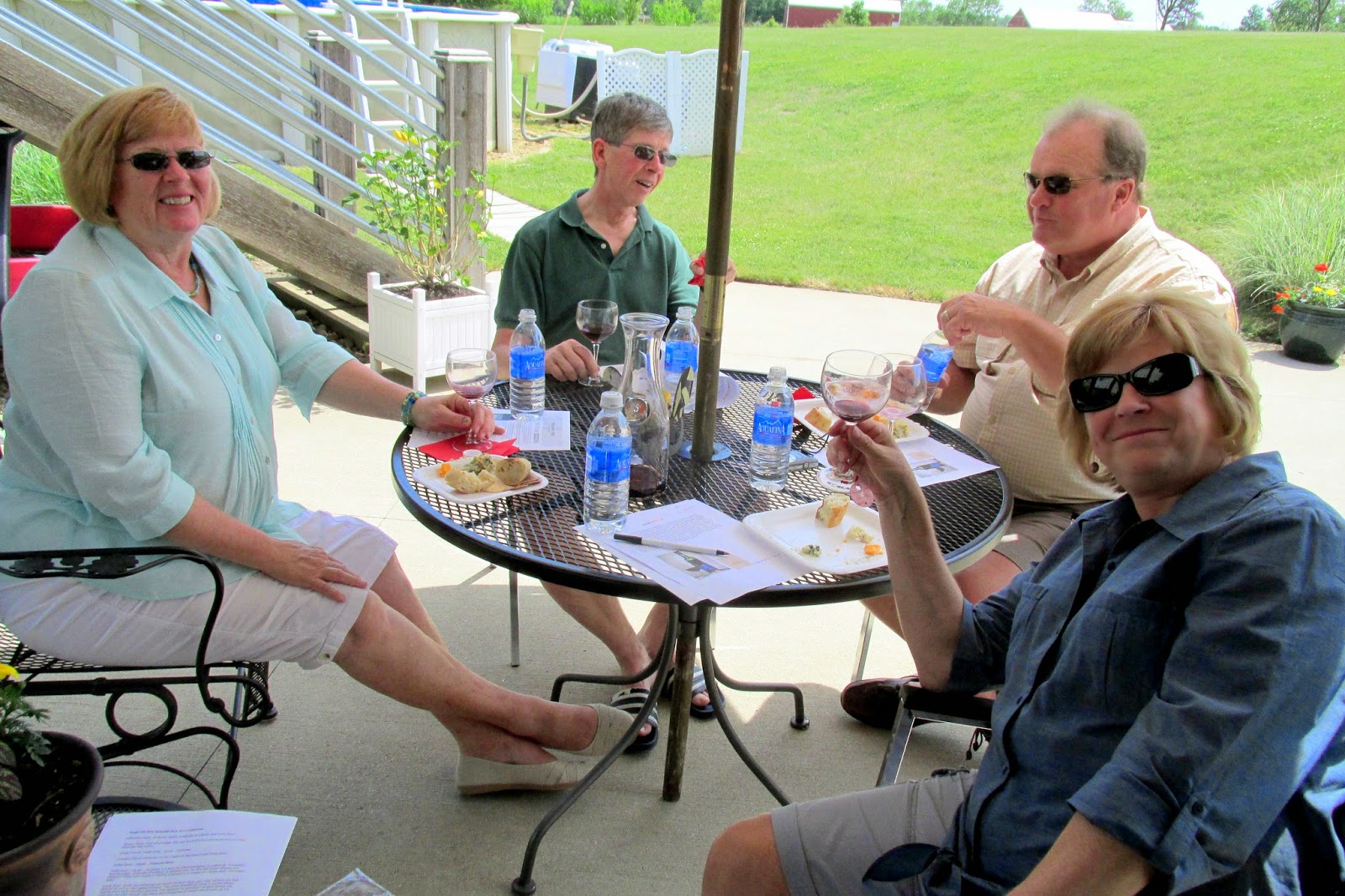 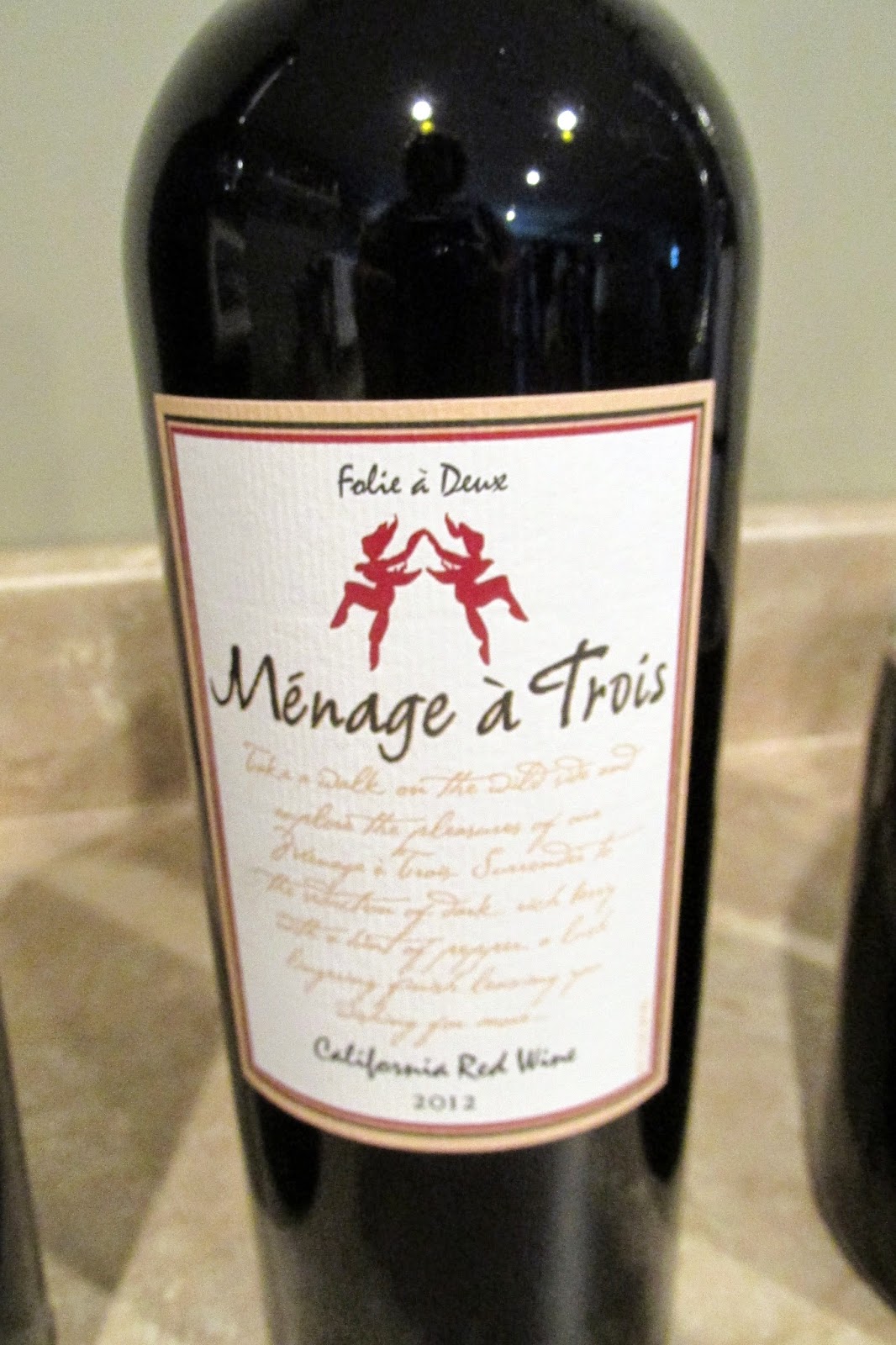 This is a reasonably priced at $9.99 or less. A mixture of Zinfandel, merlot and cabernet grapes, the 2012 vintage was tasty -- and a good price. 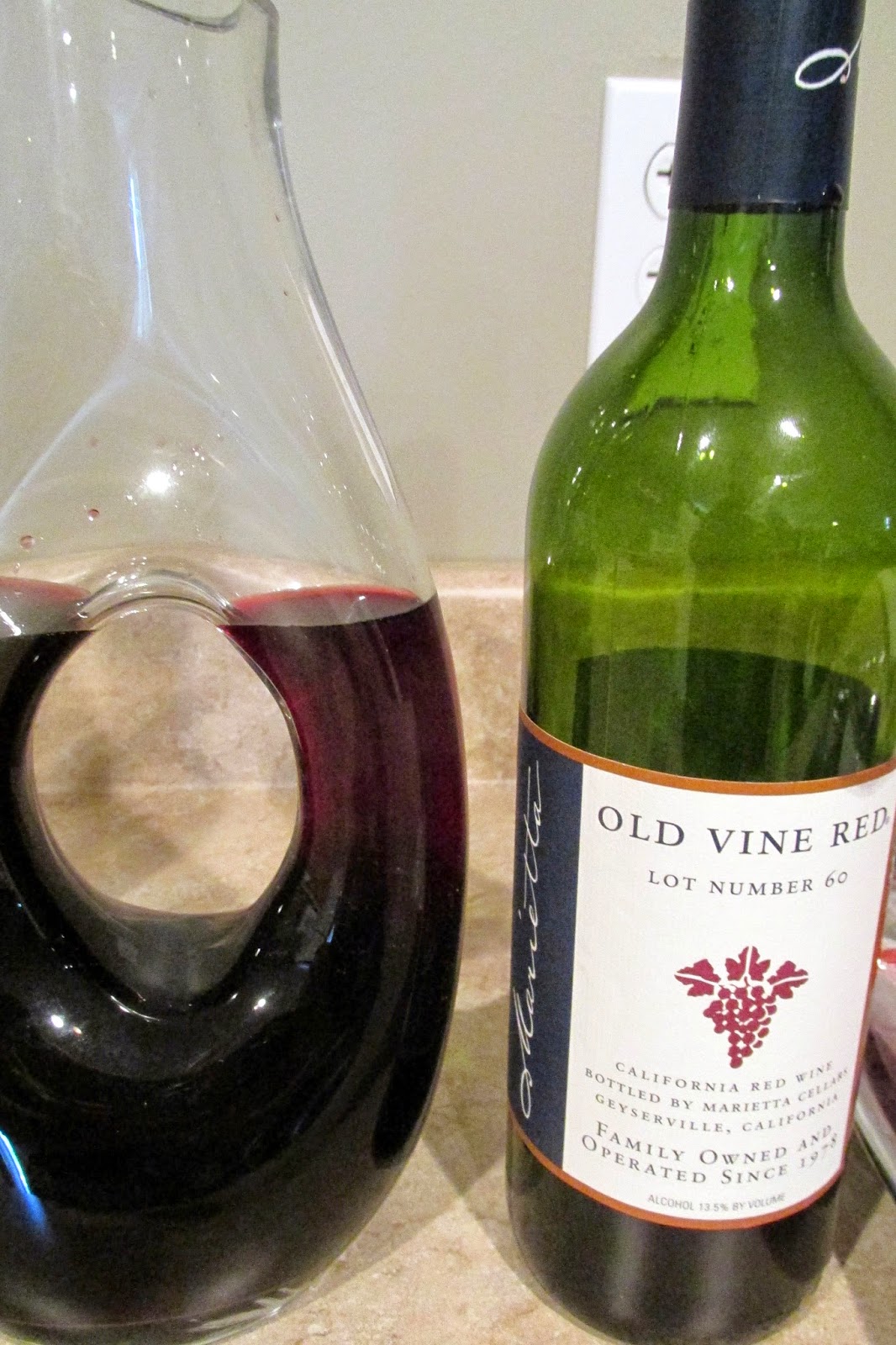 Another flavorful red, it combined a variety of grapes from Sonoma and Mendocino counties. It was a very dark, deep red and one of our gang said "Oh, wow! I'd buy this in a heartbeat! Roger said it felt like "Velvet on the tongue." (I think that was good, although the last time I tasted velvet...) Anyway, it was a hit! 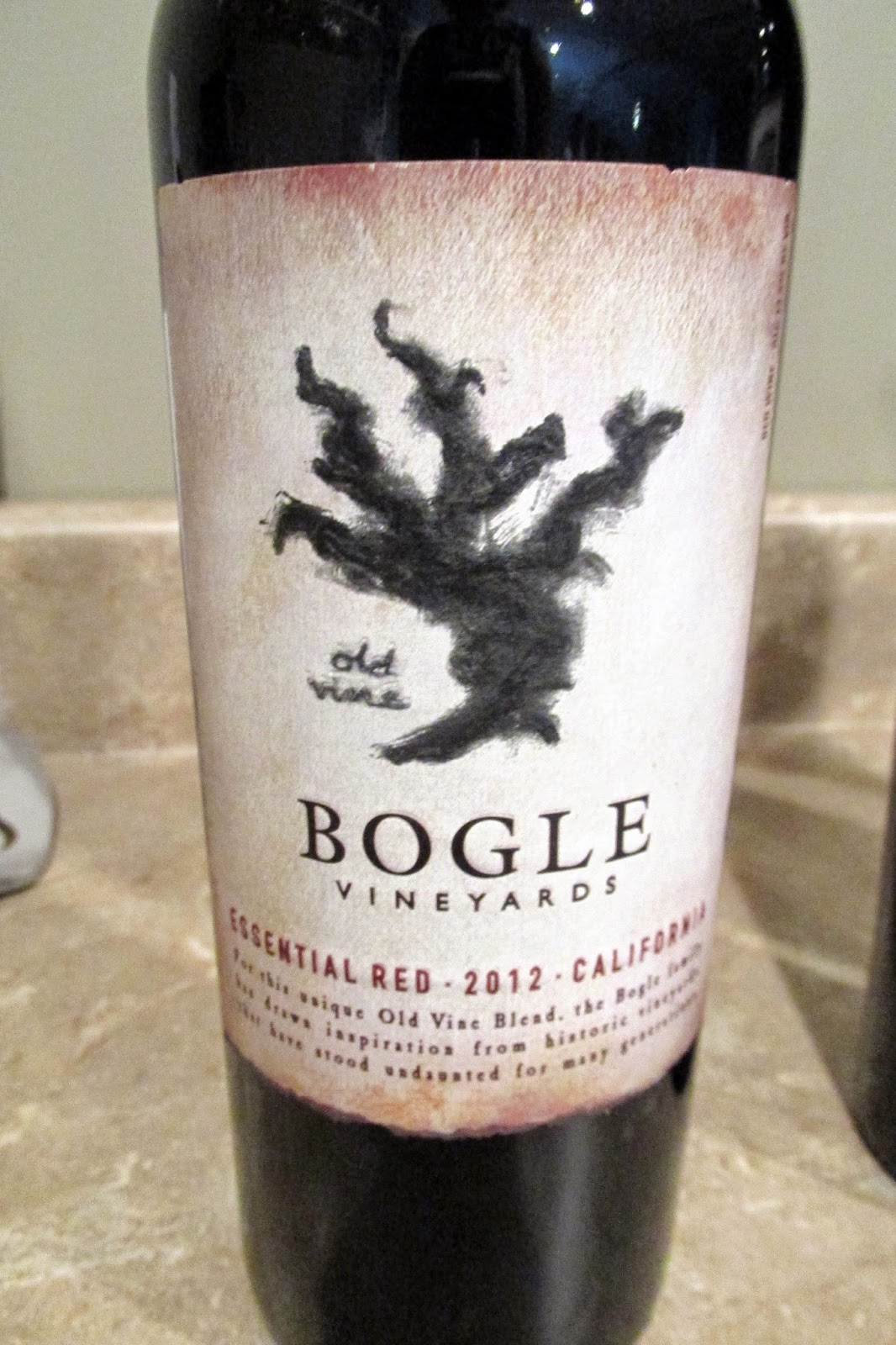 At $10.99 it was reasonably priced and had a full and delicious combination of Petit Syrah, Syrah and Zinfandel grapes. It's also easily available. I liked it very much and one of our group mentioned they had this quite regularly. I would definitely get it again.. 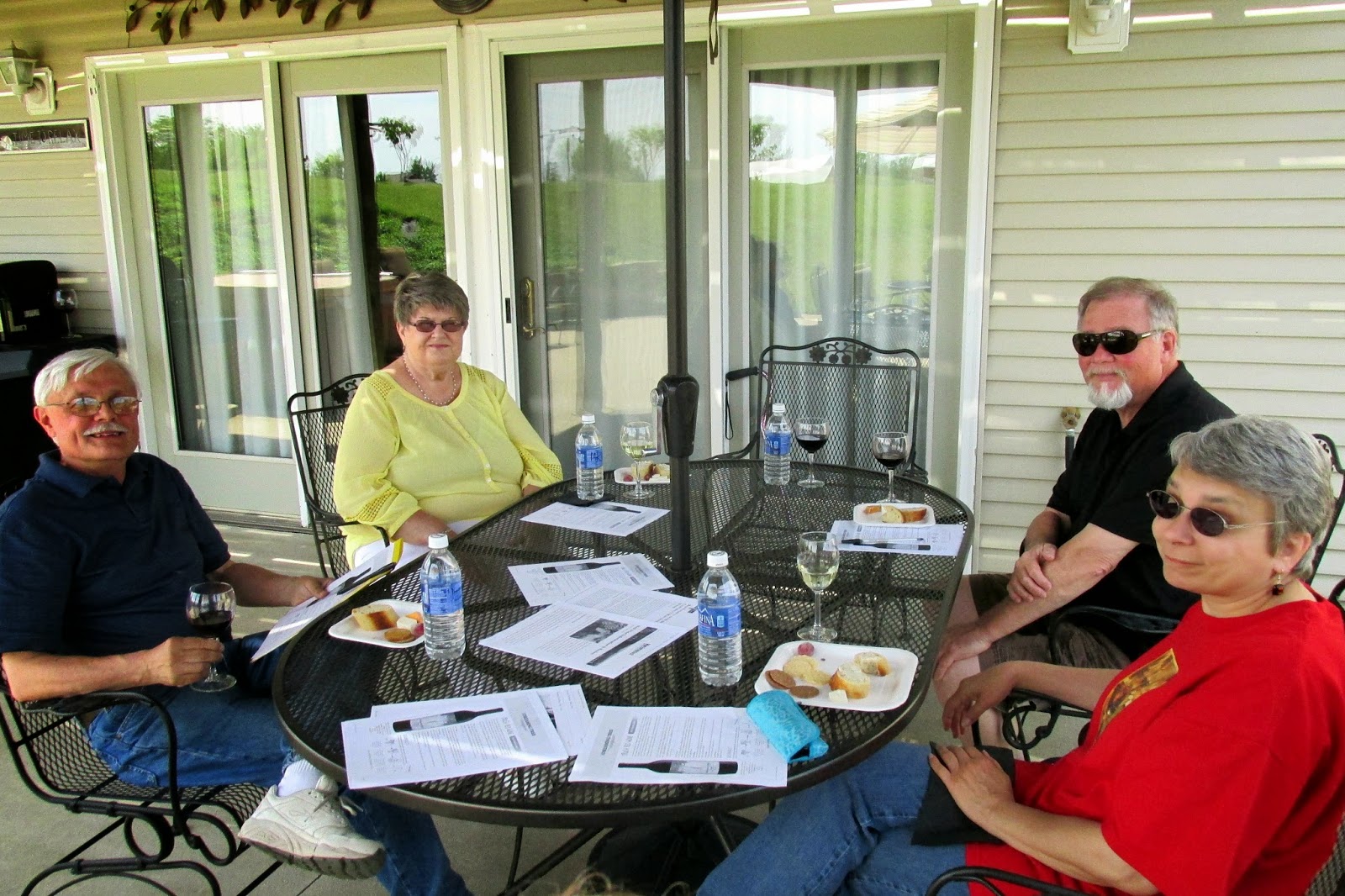 The last wine offered was one Dick had in the cellar for 10 years and boy -- was it fabulous! 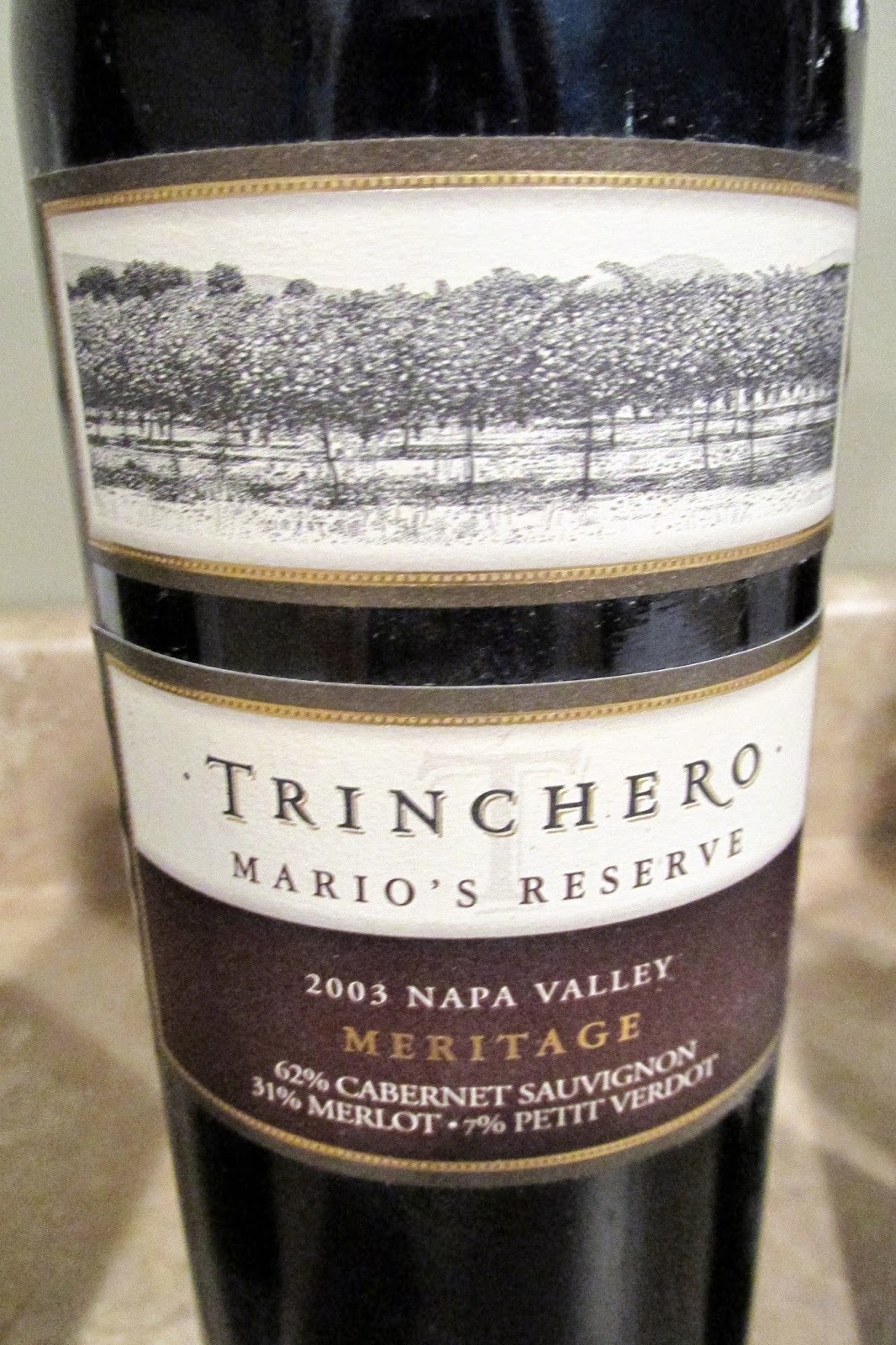 Called Mario's Reserve by Trinchero, it was a 2003 Meritage, combining Cabernet Sauvignon, Merlot and Petit Verdot. It was incredibly smooth and tasty. It was also pricy! When Dick bought this wine in 2004, it was $20. Now, he anticipates it would be $35. He said he bought it to share with special folks. We felt honored!

Of course, it wouldn't be Cork Poppers without a lot of fun and laughter... 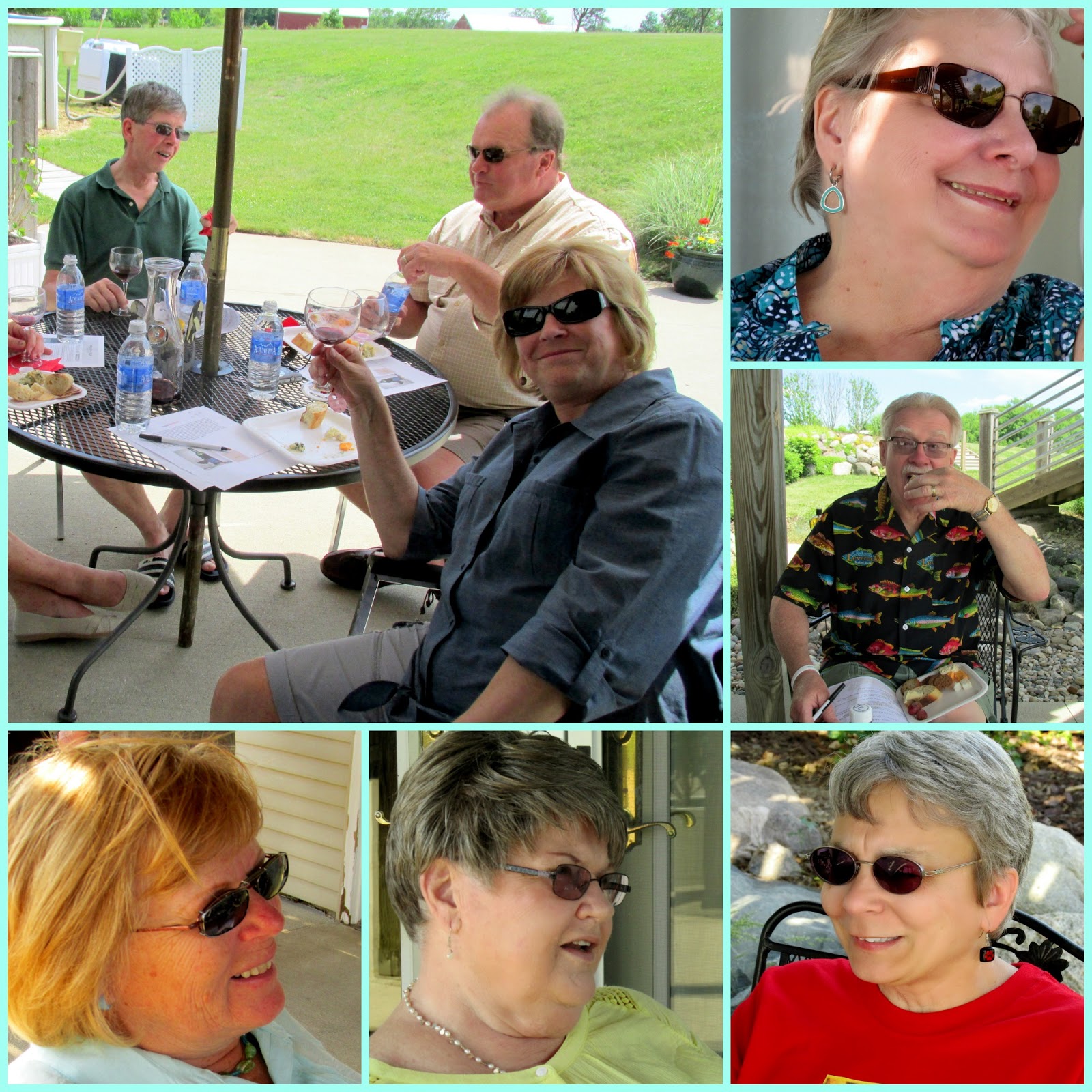 ...and a lot of great food. When it's at Anne and Clayton's, you can count on that food being grilled! 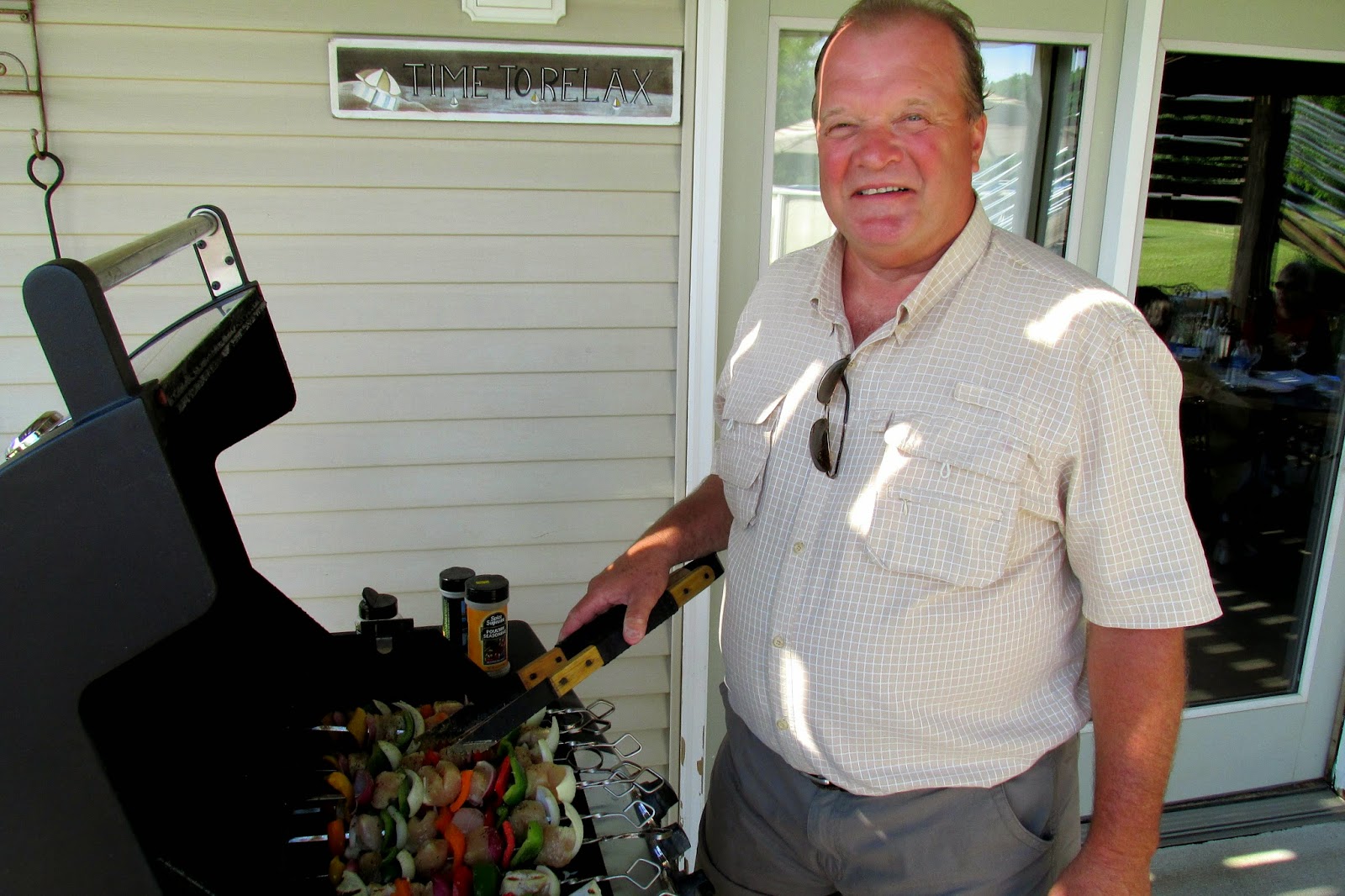 And there is always a helper! 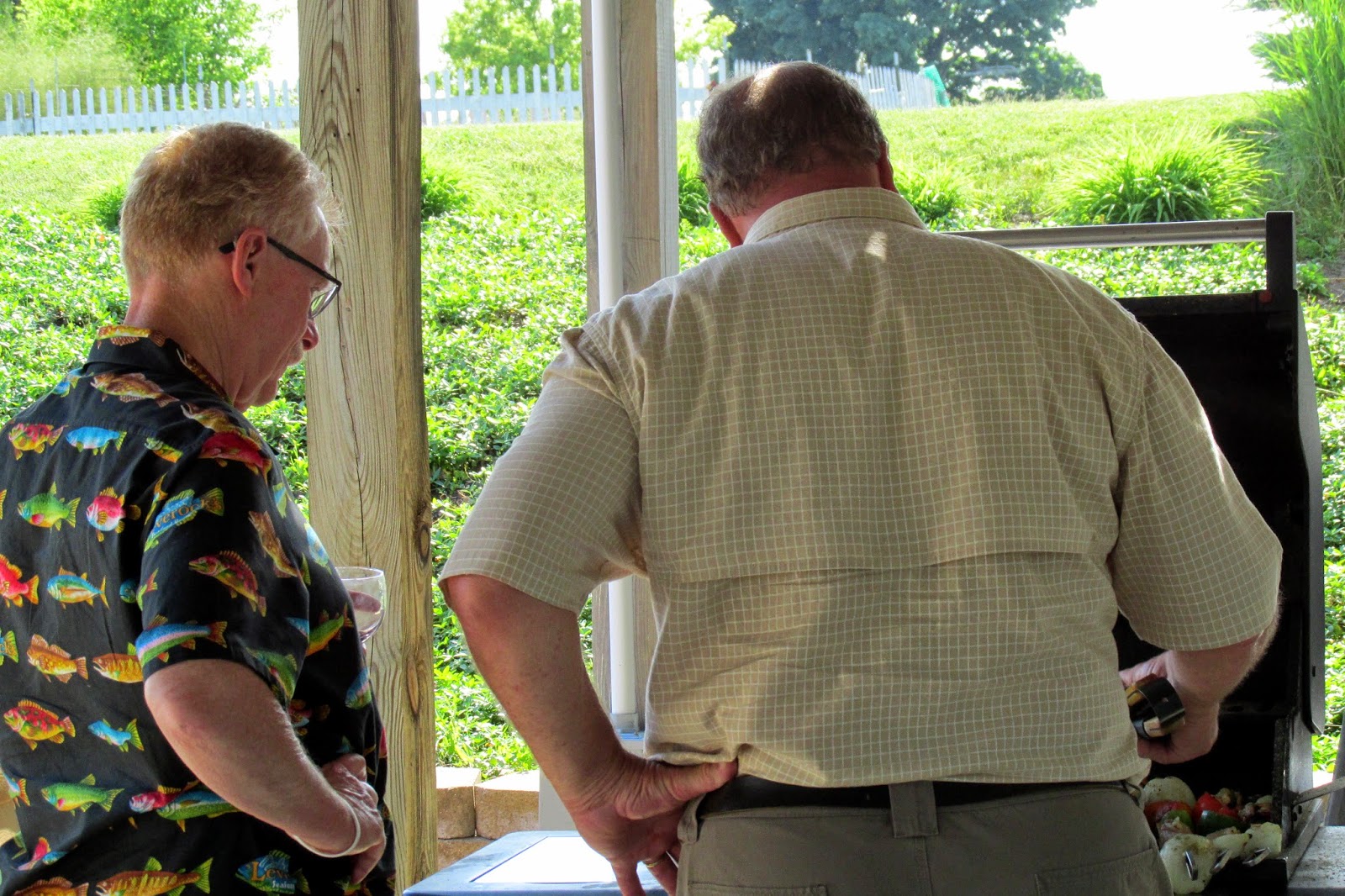 And, while Clayton was grilling, others were getting a head start on the Belmont! 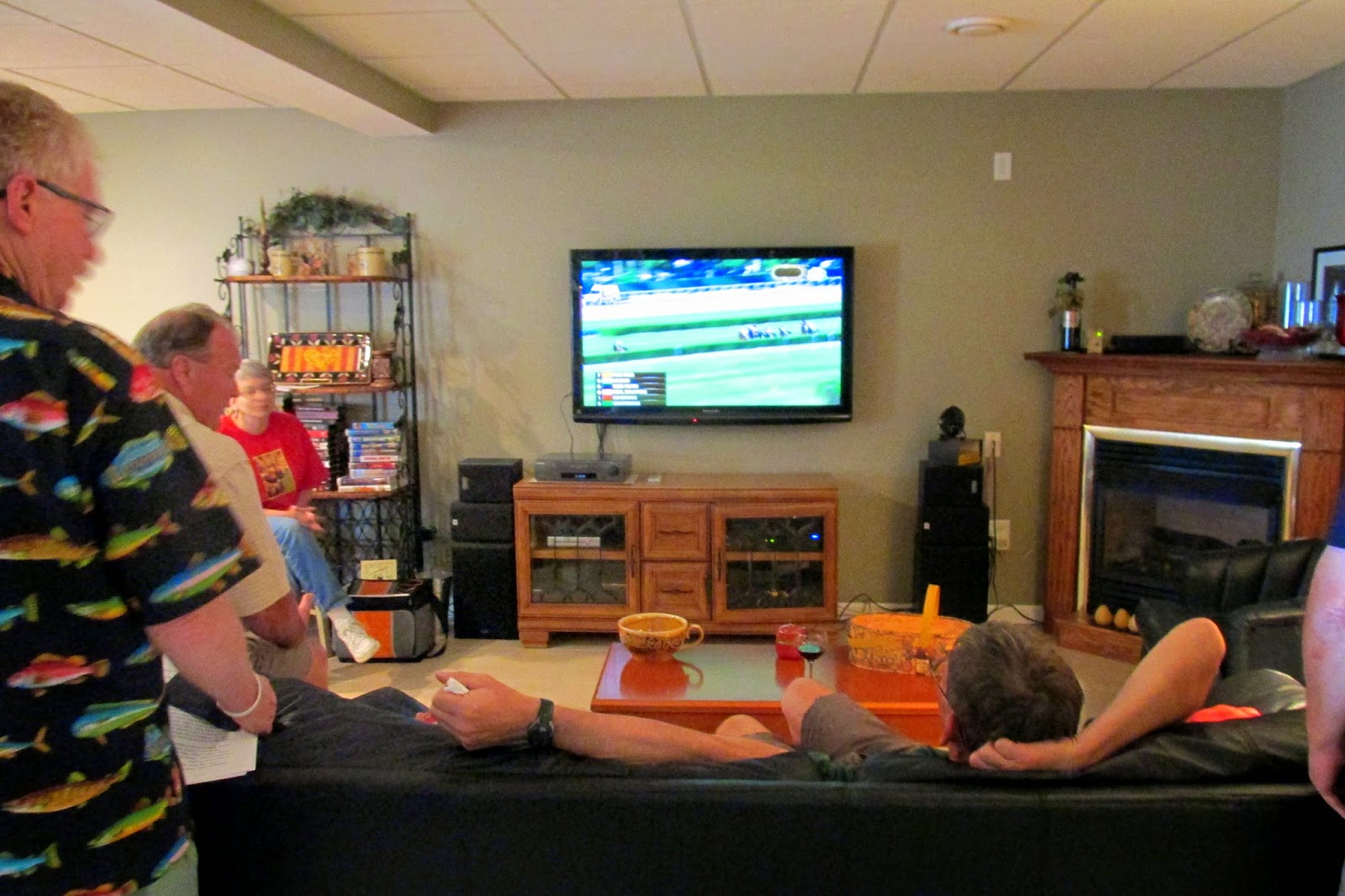 Of course, everyone tries to outdo their "past performance" and everyone else with the food! Apart from the fabulous bread (Rick) and cheeses and crackers (Pat, Dick and Cheryl), our menu included a terrific rice dish by Meredith, my "Little Bit of Everything" potato salad, sauteed mushrooms (Anne) and Barb's mile-high lemon pie -- not to mention the shishkabobs and skewered tomatoes! 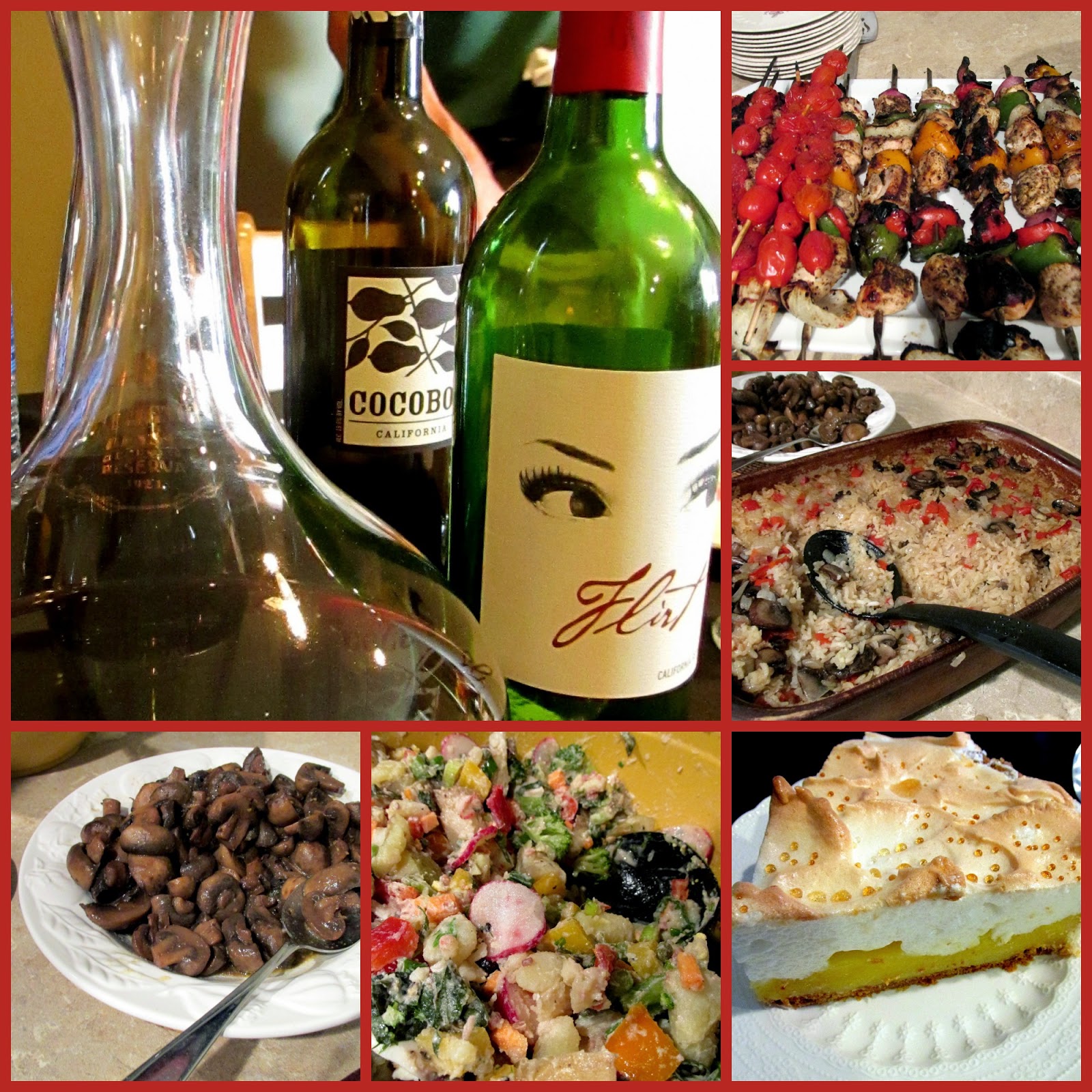 Our dinner wines were also California blends -- Cocobon and Flirt -- both in the $10 range and both terrific. 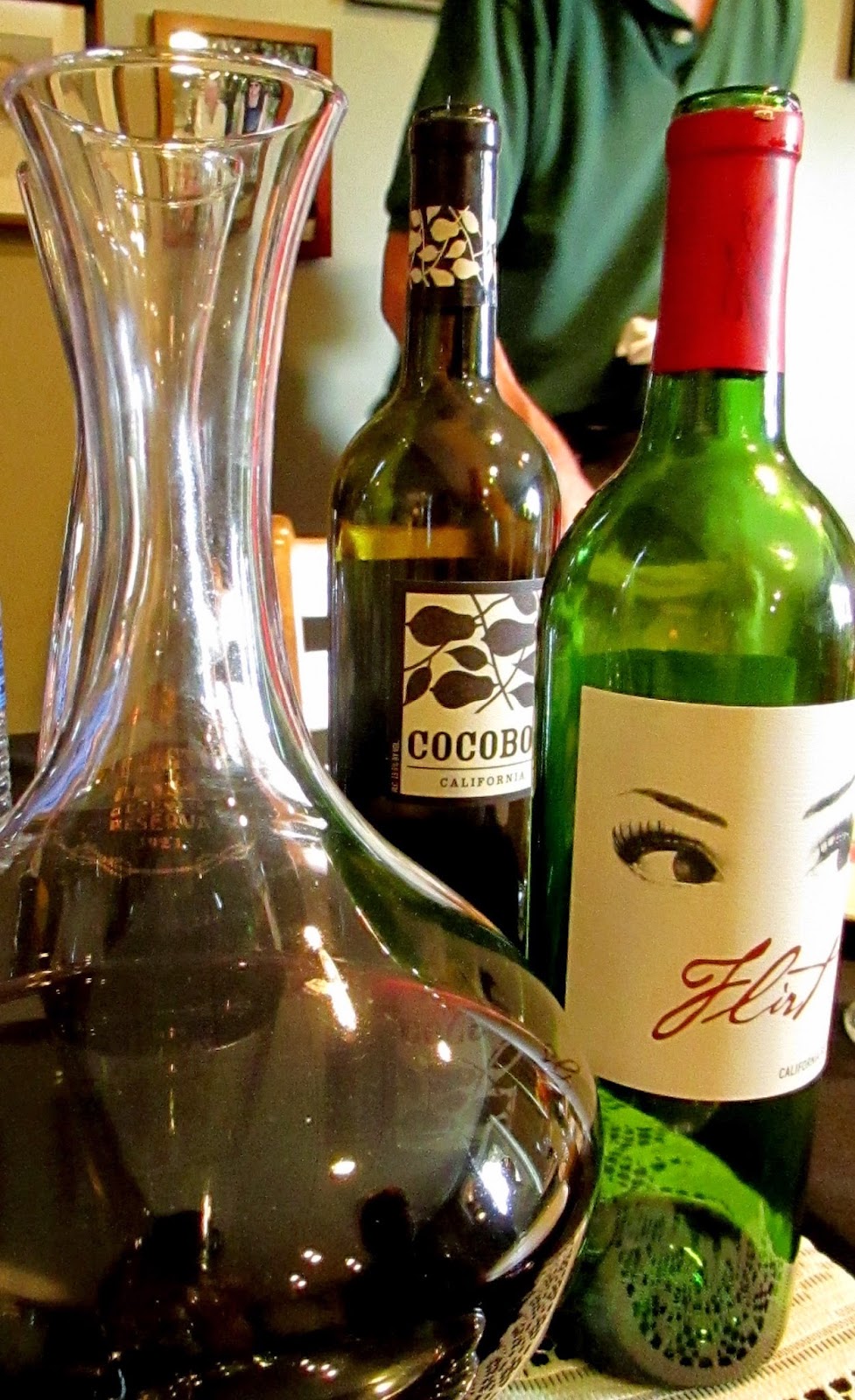 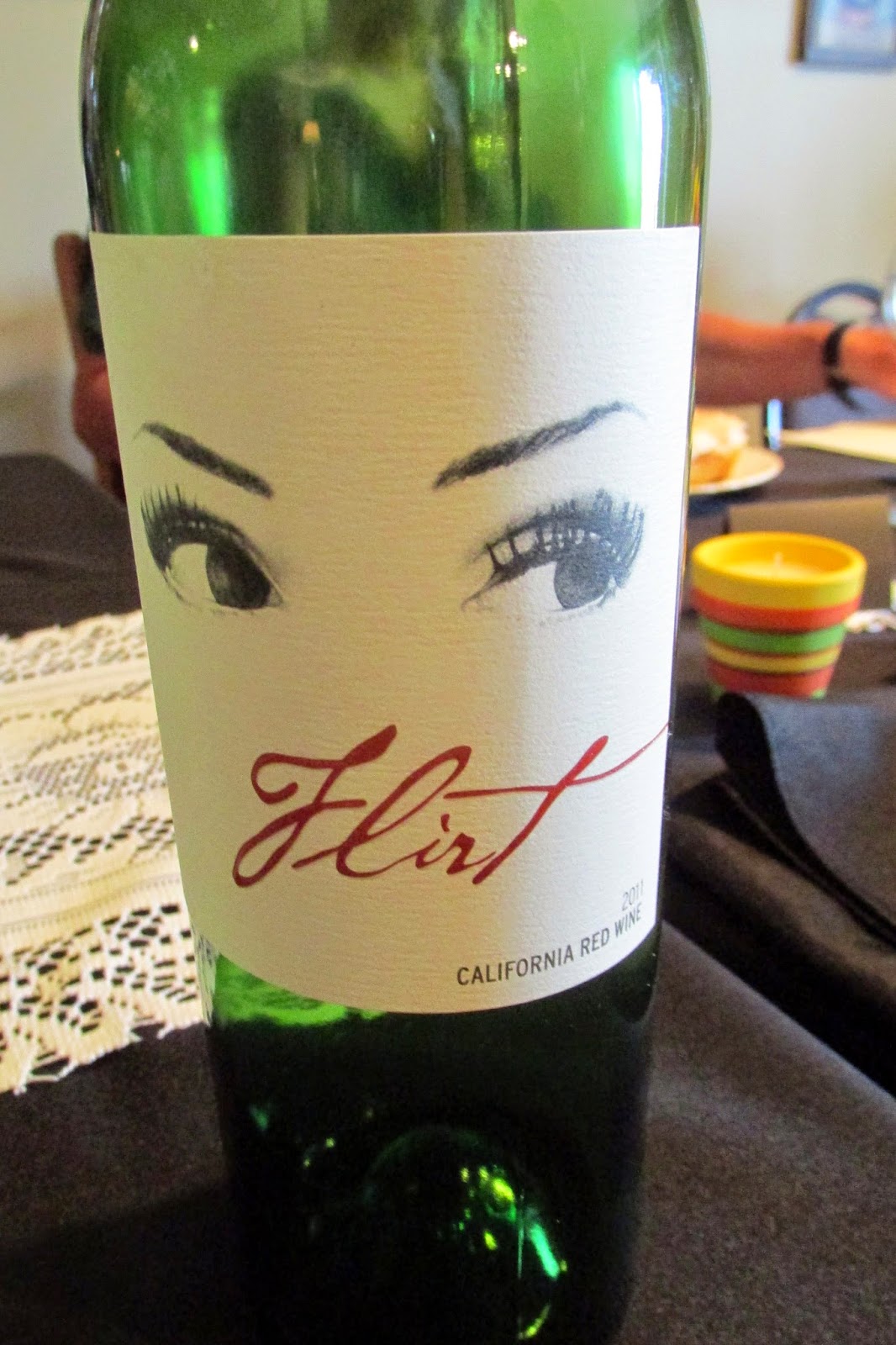 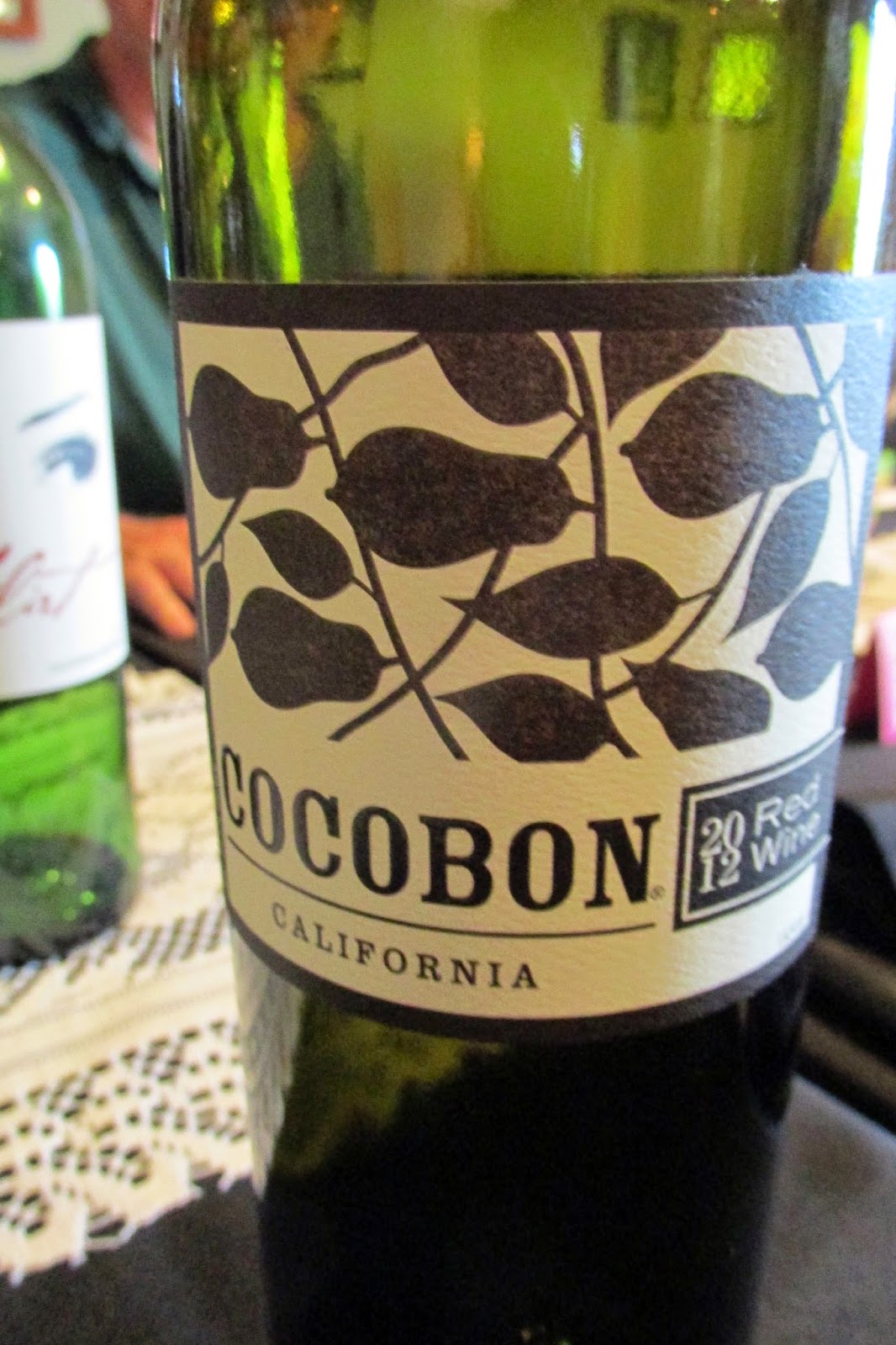 Of course we had to take a minute during dessert to route for California Chrome. 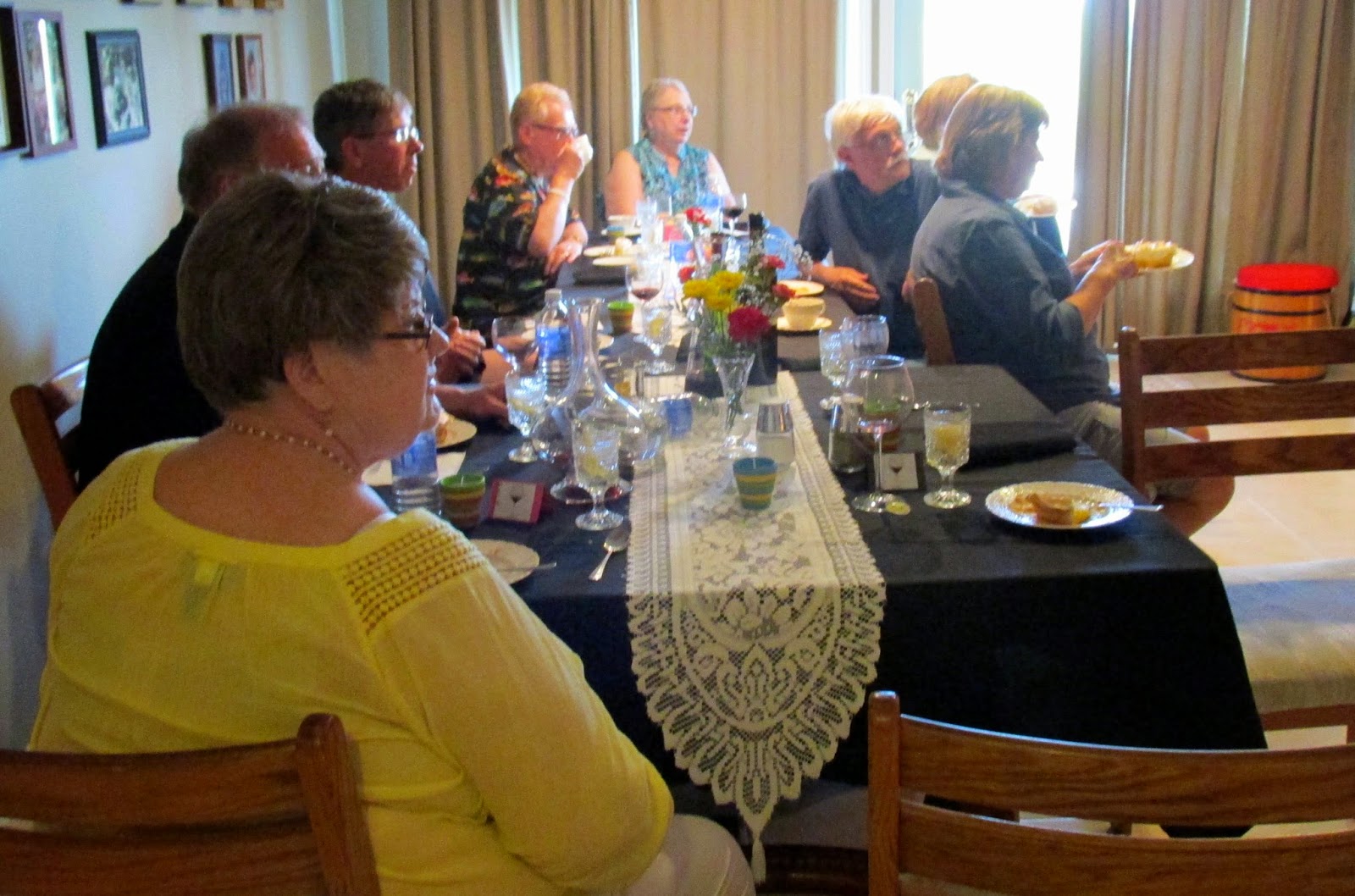 It wasn't to happen. Guess we'll have to wait another year for a triple crown opportunity. (And if you can't tell from that how long this post has been sitting in draft -- well, now you know -- we met during Derby week in May!) 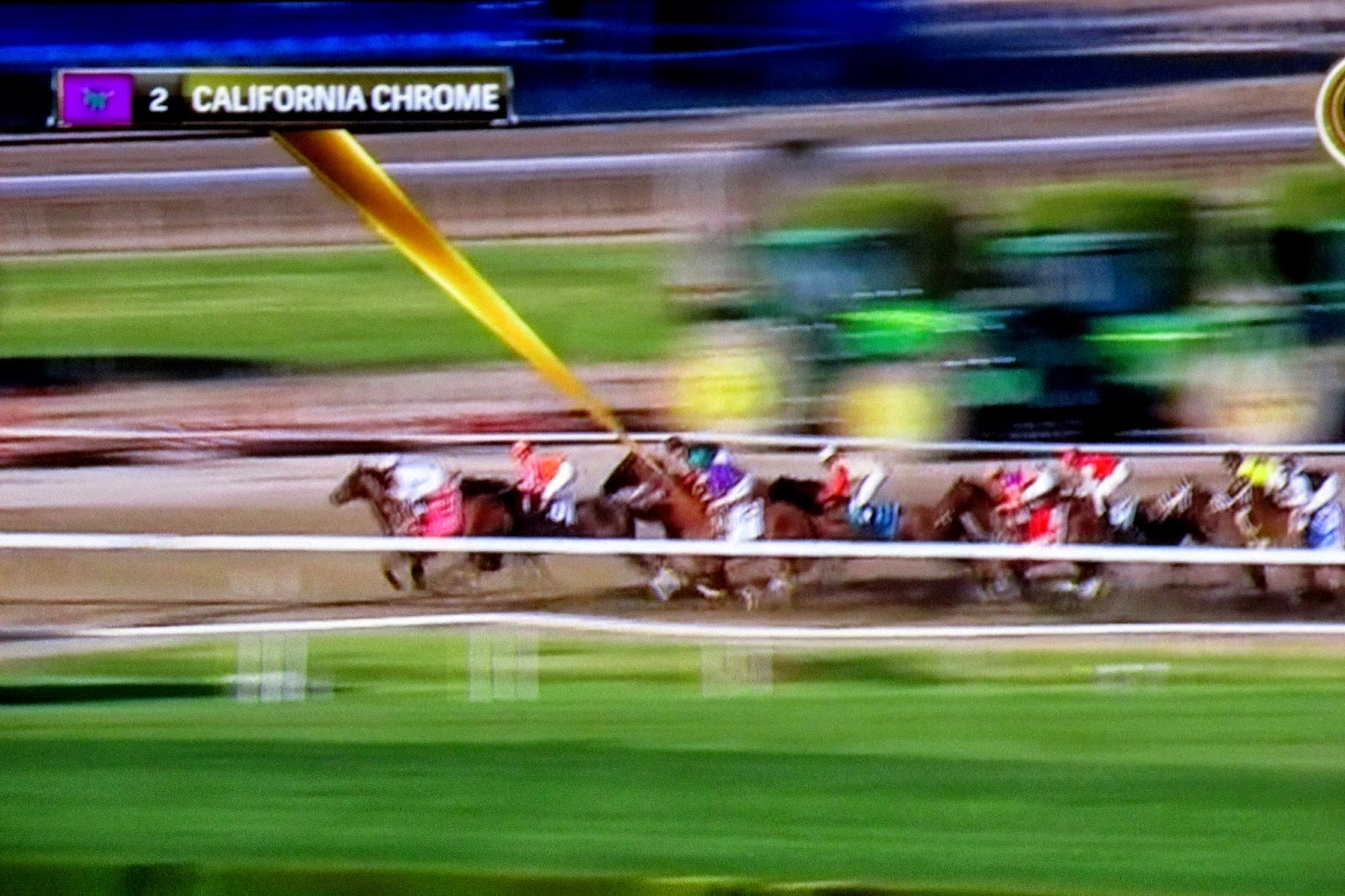 Anne's arrangement made me eager to anticipate summer evenings at the lake. My internet is spotty there, so if I'm slow on the visiting or comment reply rounds, you know I'll be with you when I can! 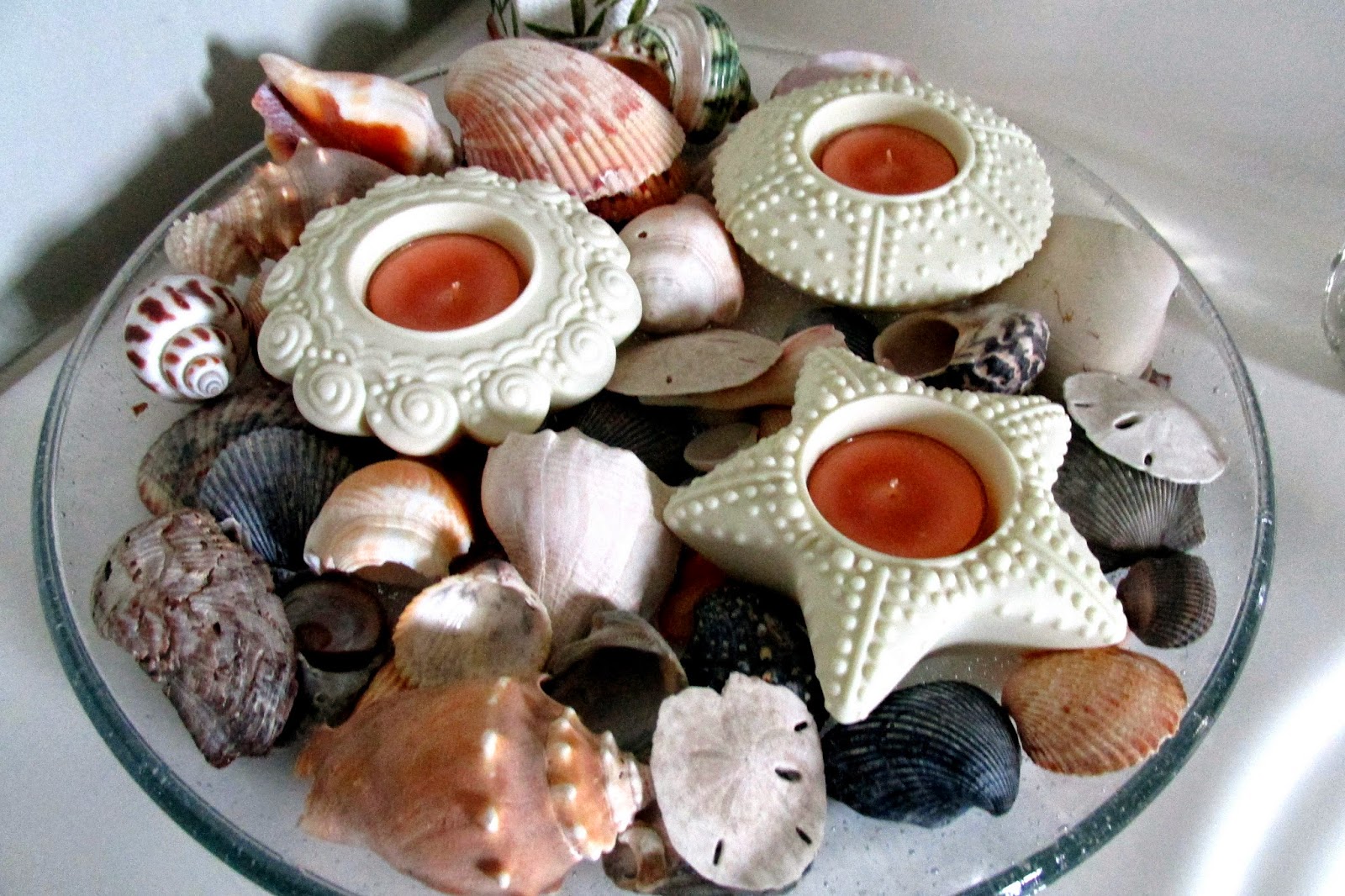 I suspect that some of these wines will be on the menu!
Posted by Jeanie at 9:20 AM

Your posts about cork toppers are always full of funn, comradary, and great looking food.

Now that looks our sort of evening, we love a drop of red too.
Heather :)

Funny coincidence: last night we just finished a bottle of "Menage a Trois" that we bought in the Safeway in Kona ... to eat with a ready-roasted chicken. Looks as if you had lots of fun. We're coming back to Michigan tonight, hope for summer weather.

Looks awesome! I will make a list of these wines to try! Thanks! Do y'all hide the names of the wines before trying them? I saw somewhere a group puts them in brown bags and ties the tops with raffia... guess they number them and you can rate them or put comments? I don't know.... need to go pour some red wine now tho! Loved the post.... the food looked yummy, too!

Ann's arrangement was so pretty. Everyone looked like they were totally enjoying the day. The food makes me hungry just seeing and reading about it. Thanks!

Those sound like some fabulous wines (and a fabulous party to go along with them all)! Looks like a lovely evening.

Sweet Jeanie! Now this is a party! I am reminded that when I went to Northern California to visit my sister in law, she took us to the Korbel Winery - the champagne haven of the area. WOO HOO was the tasting party lovely. I was waiting for the pink bubbles to make their way into the program, but that variety was last to come and I was a bit BUBBLE-HEADED by then!

Like you, we are having a cooler than normal summer, but it does beat the heat and humidity! We can still sport shorts but not have to suffer in the stifling air. ENJOY! Anita

I didn't know about these "crush" wines, but of course, I don't drink red. Are there similar whites? For some reason, I think not, but I have no idea how I came to such a conclusion.

What I know is that the centerpiece is gorgeous. That's pure summertime, and makes me long for the beach!

I'll take some potato salad and lemon pie but skip the wine please. Do you guys do the swish and spit or the swish and swallow (or just pass the bottle?!) Did you ever get around to trying some British Columbia wines? I'm not a wine drinker but it is a big industry in the Okanagan part of the province.

Another great gathering. I love when you have these parties and I'm not even there, but still, they are such fun.

Pour me a glass... any glass, any wine... ;o) LOL... And is there any more lemon meringue pie?! Oh, your gatherings around look like delicious fun and great conversation, Jeanie! Wow... ((HUGS))

Ooo, I love blends and these all sound so good. I love the label on the Dave Matthews Band, one. Looks like a really fun night. You can't go wrong with a meal made on the grill on a summer night!!

A great way to celebrate the summer sunshine. California is blessed with many wonderful wineries.
my new blog is www.pearlmaple.com

I need to write a couple of these down. You look like you have a fun group. Cheers!

I love Dave Matthews and so will
happily sip his offerings
from now on...thanks for the scoop:)
Hope summer is soaked in sweet goodness for you and yours,
Jennifer

I'm not much of a wine drinker, but love your photos of the bottles, Jeanie. Very artsy. The shells are exquisite too. Thanks for sharing another of your cork poppers gathering. Have a great time at the lake!

I know absolutely nothing about wines, but your posts always make me want to join a study group. :) I just love the names of the wines... which is not a good sign if I ever want to get more serious about this! Love your photo essay, once again. Happy Summer!

I'll have a glass of all of the above! Now that's one party I wish I would have been invited to :) I love hanging out with friends and family for that matter! I'm sorry I haven't visited you in awhile, I do love your blog, I have just been trying to finish my bachelors degree for the last million and a half years :)
Much love to you,
Tammy