Shortly after my first class concluded, I attended the Artiscape reception, which included a preview of the marketplace (dangerous spot but considerably smaller than the last time I attended). Also on tap was a series of demos. I attended four.

The first was from calligrapher and painter Barbara Close, in whose class I was enrolled the following day. 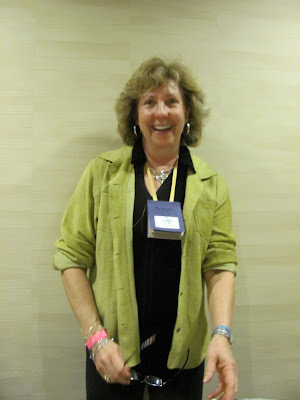 This was fun, simple and effective. She took copies of a couple of quotes she had elegantly penned. Our task was to use paints and powders to add accents. 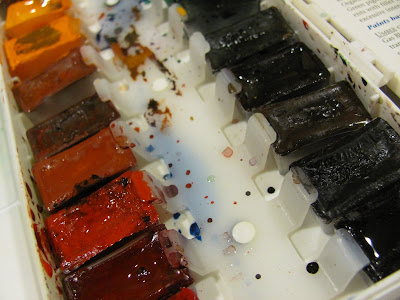 I used watercolors -- both "traditional" watercolors and this wonderful pan of metallic watercolors (which I bought at the marketplace.) I also used a bit of the gold powder. This is the final result. 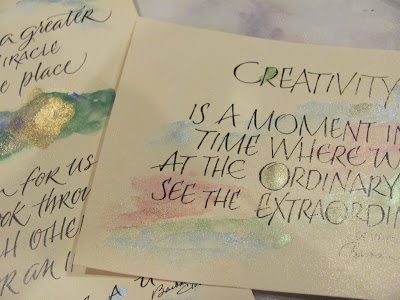 I loved this because it was so darned simple. Of course, part of what makes it looks good is Barbara's lettering, and I won't be able to duplicate that! Still, you get the gist of it! 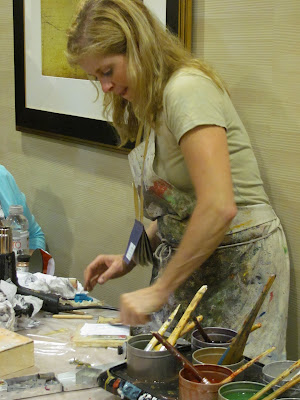 I've seen a number of bloggers (but most notably Kristine Campbell) do things with encaustic and it sounded rather complicated. 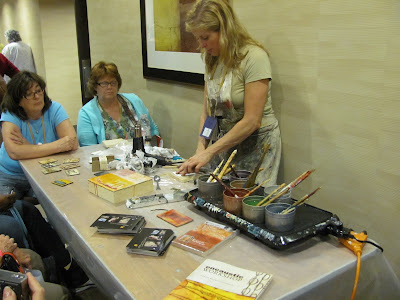 Certainly a 10 or 15 minute demo is going to cut some things short! But Patricia was an excellent teacher, able to cut a complicated and time consuming process to its essence and deliver some beautiful results. 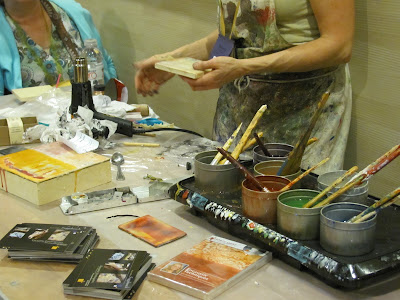 I have to say that I'm probably not going to take up this amazing art myself -- but I have tremendous respect for it, and it wouldn't surprise me if a piece of someone else's ended up on my wall someday! 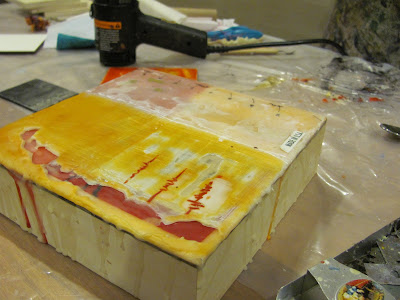 The third demo I was was from Jacqueline Sullivan. I was signed up for her class the following day as well and have taken classes from her before. She's an excellent instructor. The topic of this one was "foil painting." 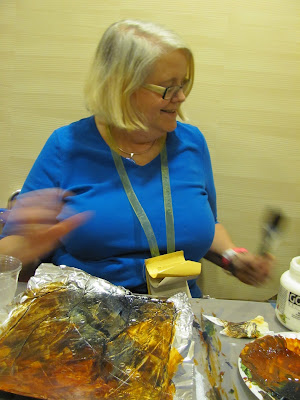 THIS one I must try! Basically, Jacqueline covers a surface with foil (attached with gel medium -- again, more complicated than I'm saying, but enough to give you the idea). It's then textured with a variety of tools. 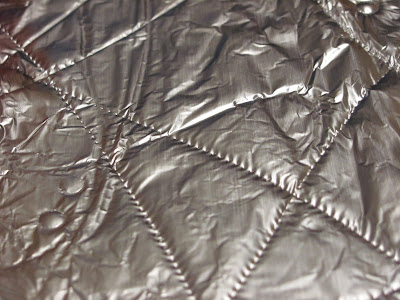 She then mixes fluid acrylic with GAC 200 and paints. 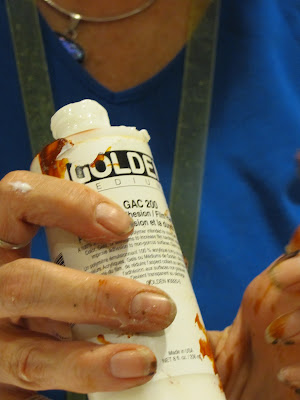 It sounds simple. But there's more to it than meets the eye! What I can say is that the end result is fabulous! 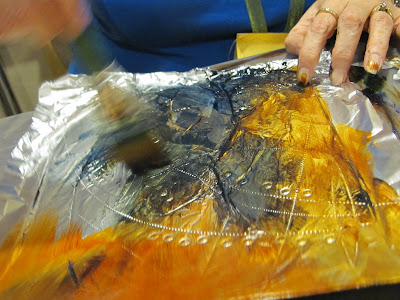 Finally, Kathleen Wentz (I can't find a website for her; I'll put in a link if I get one) showed us some fun techniques with stamping and inking. 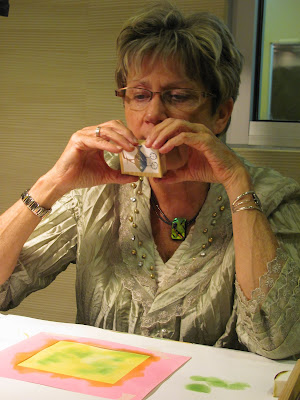 I don't stamp very much and when I do, it's pretty much -- hit the pad, make the impression. So it was good to see how easy some of the techniques were. 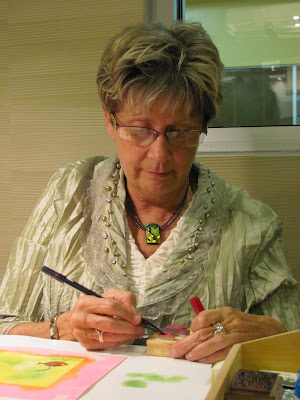 And the colorful piece she worked on was fun! 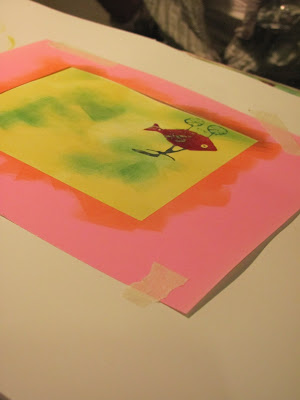 Can you imagine how after seeing a bundle of creativity -- fast creativity -- I was excited for the next workshops? In the next post, we'll go to Barbara Close's "Paper Textures" class.

(New at Chopsticks and String: "Anne Frank in Words and Pictures.")
Posted by Jeanie at 1:48 AM

Just amazing how that delicate wash of color you used and the metallic powder so gorgeously set off the beautiful calligraphy!

All of this looks like so much fun -- makes my own fingers itch to get into something (and gotta admit, I'm thinking about that foil technique)! Looking forward to seeing how you work these new ideas into your own work!

This must have been heaven! So much to see and take in....they all look interesting. That's my biggest problem....wanting to try everything!!

These classes are great and I love the foil idea. You'll be bubbling with inspiration when you get back. Looking forward to seeing what the next classes bring.

Very cool pics of what was obviously a great evening

sounds and looks like a case of TOO much fun to me :)
oxo

Jeanie - read every word. Am convinced that you could teach/lead a lot of these classes and techniques,to any of us! Sign me up - I'll attend.
I love this stuff. Thanks for sharing and looking forward to your next entry, of course.

You are so creative and you obviously just love your crafty experiences. I admire such talent.

It's all so inspiring, isn't it? It sounds like you really enjoyed it. The foil painting looks interesting.

I'm so envious of you! Looks like great fun and so inspiring! I agree that I find encaustic works so lovely, but from what I've read of it, don't see myself taking this up. Heaven knows, I've enough other stuff and ideas that I intend to get around to!