A long time ago, I saw a painting in the art section of the New York Times that intrigued me. It was done by a Renaissance artist who incorporated flowers, fruits and vegetables into the features of his portraits. For example, berries might form eyes, oranges could be cheeks. It fascinated me. 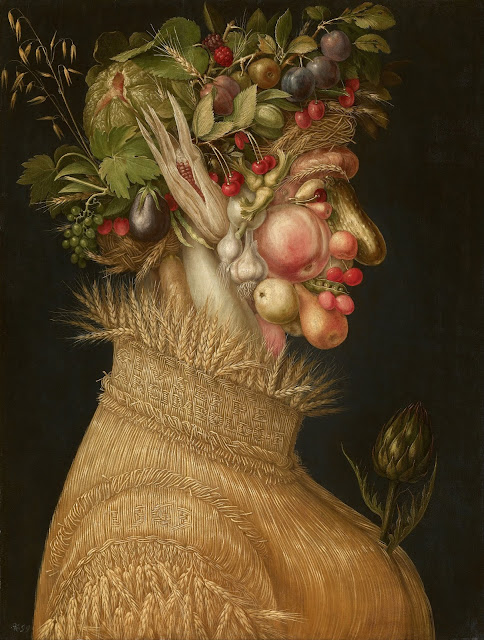 The artist's name was -- I would learn later -- Giuseppe Arcimboldo. Arcimboldo was a court painter for Maximillian II of the Hapsburg Empire. 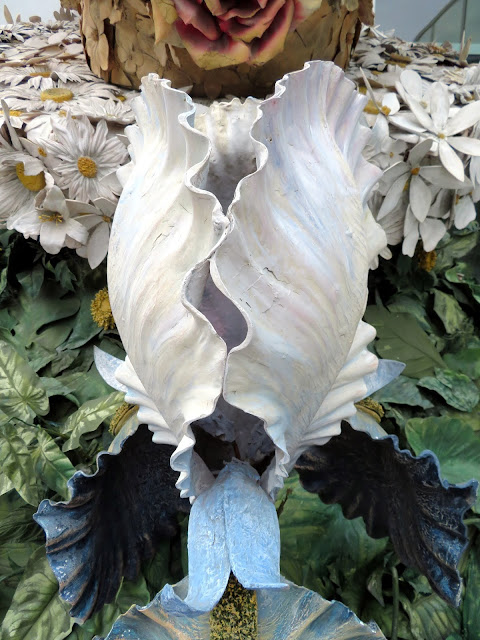 To celebrate Maxmillian's reign, Arcimboldo created a series of four paintings called The Four Seasons. He used botanical forms to represent the season;s cycles, symbolizing the peace and prosperity of Maximillian's reign. 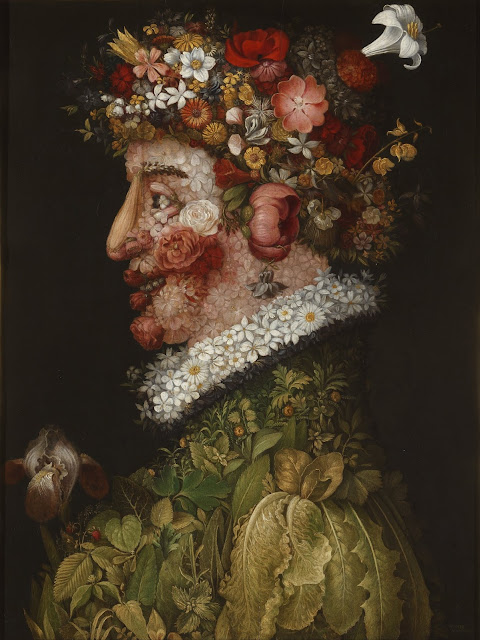 Imagine my utter surprise and delight to walk into the Flint Institute of Arts and even before I saw a single painting or paper gown, I saw life-sized renditions of four of Arcimboldo's works -- The Four Seasons. 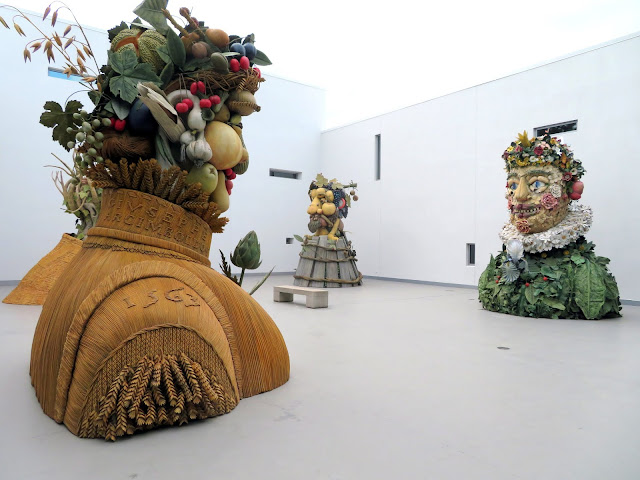 This oversized (and I do mean oversized -- well over two stories tall) installation was in a couryard of the FIA and we passed it upon entering. I knew it would require more time spent. 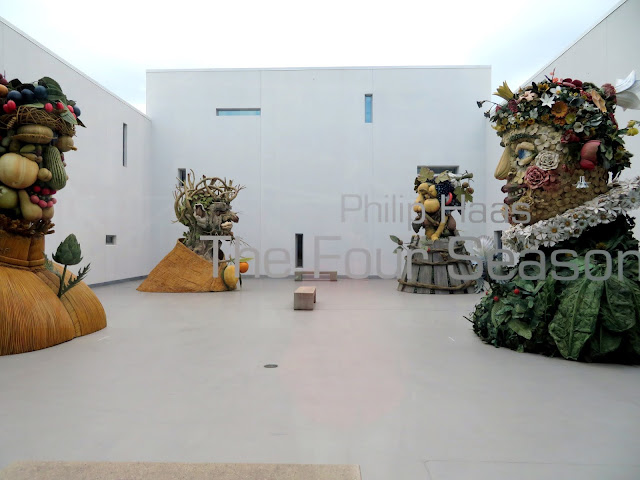 The artist who created these is Philip Haas. He first created four smaller versions as prototypes, using fiberglass. These each stood about two feet tall, give or take an inch or two. 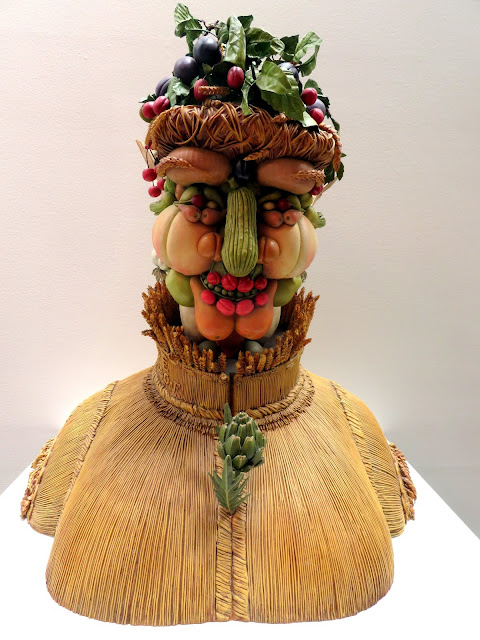 If Haas' name is familiar to you, you might be a film buff. His movie "Angels and Insects" was perhaps the best known of his four features. This particular installation was put together with the same care the director used in his movie, manipulating elements to achieve maximum impact.

The portrait busts themselves stand 15 feet tall. Rick is no shortie and he was dwarfed by this one. 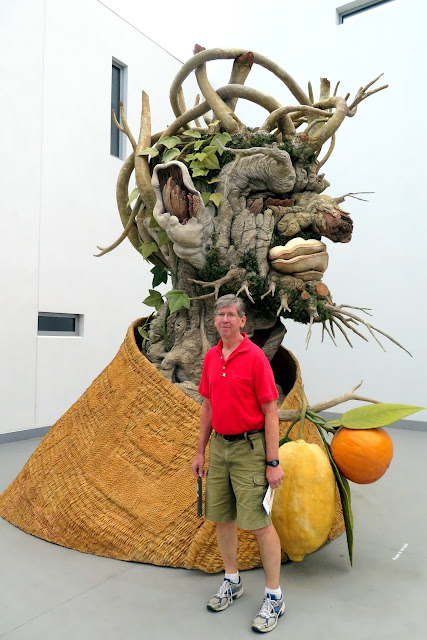 In the paintings, Arcimboldo uses botanical forms appropriate to each season for the clothing and features of the "characters." 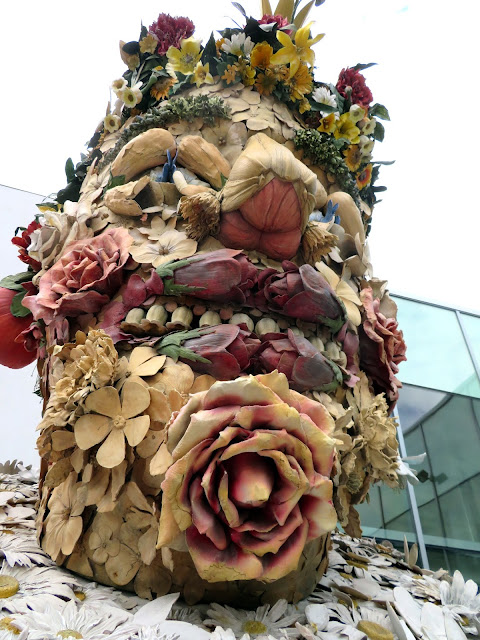 Haas does the same, using the paintings as inspiration and filling in what might not have been provided in a two-dimensional piece. 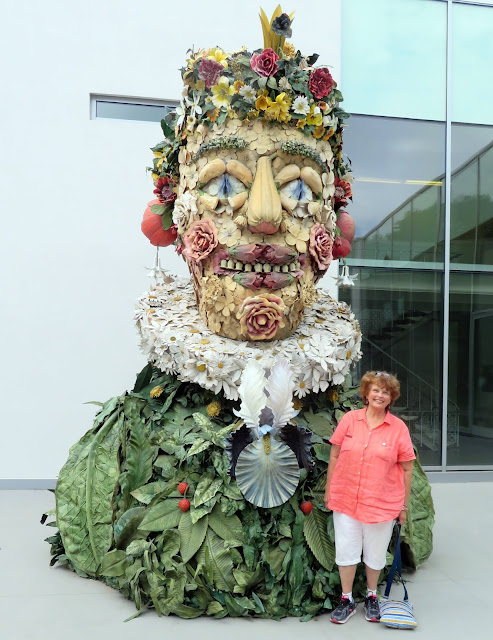 Each piece was made of hundreds of individual sections with molds made for each. 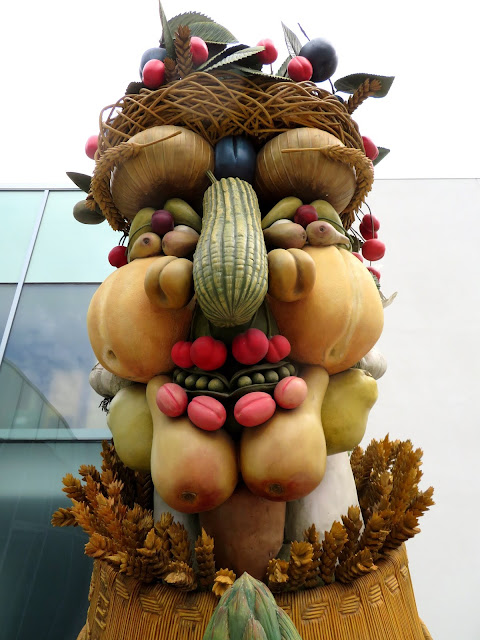 They are cast in fiberglass that is injected with pigment and added to a supporting steel infrastructure. 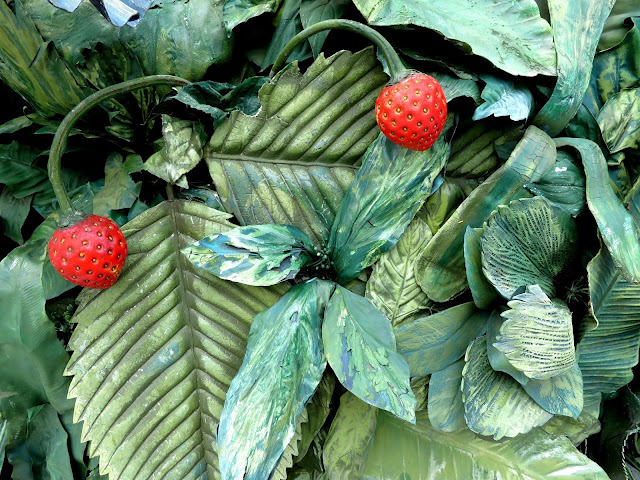 When assembled for exhibition, the figures required cranes, riggers and experts in sculpture installation. (How they got a crane into this area, I'll never know!) 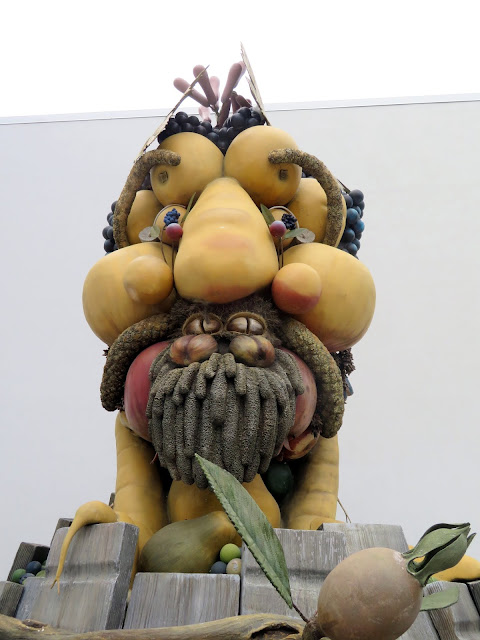 I say "hat's off!" to Philip Haas. The exhibit was well worth a visit -- just for the awe factor. (Michigan readers, the exhibit is still at Flint Institute of Arts.)

Sharing with:  Best of the Weekend

Oh, that must´ve been awesome to see them like that, Jeanie!
A crane!!!
Very cool exhibit, thank you for sharing this!

Fascinating! I never would have guessed that Flint could have such an interesting institution of art.

Wow Jeanie, so incredible! I am not familiar with this artist, how wonderful that you were and when you walked in you knew you were in for a special treat! So beyond creative and fabulous!!! Wow is just about all I can say!
Jenna

From what you've been showing us, the Flint Institute has some really good shows, it must have a wonderful director and how lucky the folks in Flint are to have it! These are indeed strange and curious images. I find them a little scary and it must be mind blowing to see them in "real life"! Actually I think that Arcimboldo did other pictures in this style too, (eg. the Elements) but I never managed to see any of them even reproduced, but whatever the emotions they generate in me, I do find them fascinating!

This art work is interesting and delightful, Jeanie. The one Rick is standing next to looks kind of mean. And you know how much I loved the one with the roses. : )

I read an article about Arcimboldo in Nat'l Geo years ago. Someone recreated busts using real fruit and veg.

these were totally amazing. His team had to work fast to complete before it all spoiled.

Thanks for sharing this.

These are really cool!

Must have been quite a delight to encounter this exhibit. For me it would have represented an introduction to an artist hitherto unknown. For you it connected you with the past and I can tell that you took a good deal of pleasure in exploring these gigantic representations.

Jeanie, This is an amazing exhibit. I can't get over how big they are. I know you must have loved it. Blessings, xoxo, Susie

That is bizarre! It is amazing what some people can do.

Arcimboldo's works have intrigued us for a long time. I always wondered what they would be like if seen in 3-D and now you have shown me. Amazing.

Great looking exhibition. And, I loved the movie "Angels and Insects," which I saw years ago.

I would have loved that! he was being showcased in Provence on one of my visits:) Tapestries..books..so interesting!

Great artists give us a different perspective on life and this is certainly true of the original paintings and now the 3 dimensional art. Great photos!

Those are amazing! I can't even begin to comprehend having that level of artistic skill.

Jeanie, how amazing! I can’t imagine the time spent to create this unbelievable work of art. Thank you for sharing and your photos are fabulous.

Clearly, I have been underestimating Flint! I'm so glad you share all your interesting outings with us!

Jeanie, this is so amazing. WOW! The talent, time and creativity are incredible. My favorite is the one you are standing in front of. Thanks for sharing, I very much enjoyed this post.

Wow that is quite a display! I can’t imagine the hours that go into creating each one of these. Very intriguing!

Those are amazing Jeanie! It must have been fascinating seeing them. I have to admit, some are pretty scary and some beautiful!
I'm sure you enjoyed this immensely. Thanks for sharing this from your road trip.........

Amazing! You have to look and look again to see all that is represented in each figure.

You find the most interesting stuff!!! Road trip??---I must be missing some of your posts, I will go back and see what I have missed. Not sure where y'all are headed! Enjoy!!

Absolutely, creatively stunning and fascinating! What a show you walked into, Jeanie! Thanks for taking all those pics and sharing with us.

I've seen those paintings, but had no idea what period they belonged to, or who the artist was. The reproductions are fantastic, in every sense of the word. I wouldn't want either the painting or the sculpture in my living quarters -- there's something disquieting about them -- but each is quite an achievement. And I'm with you, wondering how in the world they managed that installation. On the other hand, I've seen videos of installations going on top of the MOMA in NYC, and I never would have believed they could do what they did.

Jeanie,
Absolutely amazing!!
Thanks so much for stopping by and for your kind words!!
Hugs,
Debbie

Absolutely incredible. I only wish I knew which image represented which season. I got a bit lost, but loved your photos.

I have never heard of this artist, but his work is incredible! Thank you for sharing.

Wow! That would be so fun to see in person. Thanks for sharing it with us. Such detail, it would take awhile to take it all in.

I love that second one.
Have a great weekend.

A truly amazing and large exhibit, Jeanie, thanks for the introduction to this artist. While I would have enjoyed seeing this installation, it isn’t my favorite type of art, but still fascinating to learn about its creation. Yes, I also wondered HOW the pieces were out into the exhibit space.

These are cool. I have seen that painting, and it is memorable. Very different for the time it was created. I like how that painting inspired these fun sculptures. This is modern art that I actually can enjoy. (Compared to painted lines of blocks on a page that is). Thanks for sharing Jeanie. Hugs-Erika

This is pretty amazing!!! I can't get over how big they are! And those strawberries are so sweet.

That is so cool. I bet it was fabulous.

Aren't these amazing, what a wonderful exhibit. I'm so pleased you went and were able to share these super photographs. I'd definitely visit if I was near!

Wow... I'd come across the name of Arcimbaldo, but didn't realize the full extent of the whimsical nature of work until now! AMAZING those life-size takes on his works! The work to make those... incredible! As always, you serve up the BEST stuff, Jeanie... thank you! :) ((HUGS))