We are moving into the twilight of the year, the time when darkness falls early and the crisp chill in the air turns downright cold. What happened to October? (Cue the music!) 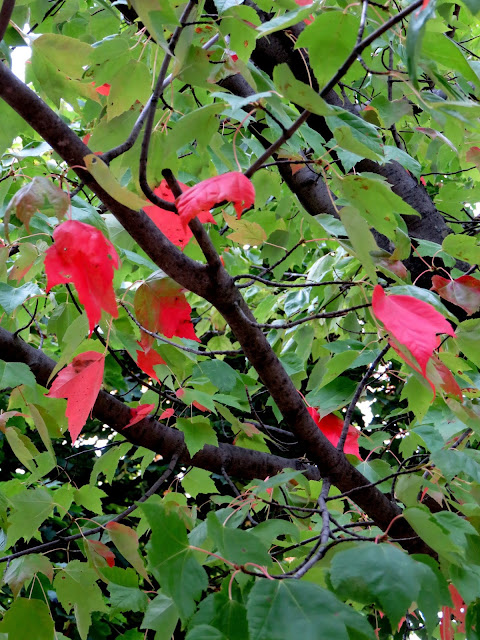 It has been a month when the colors decided to hold back their glory. Perhaps it was the 75 degree temperatures or the lack of rain. And yet, I can't complain. Certainly not with parts of the United States burning or recovering from hurricanes. And of course, we aren't the only ones. Mother Nature is not a happy camper this year, no matter which part of the world one called home. 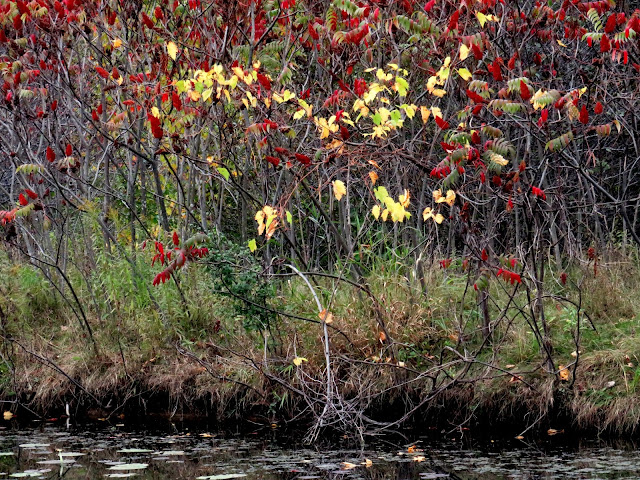 Those sunny days were so welcome, offering time to read a book outside or take a walk (or two or three or more!). 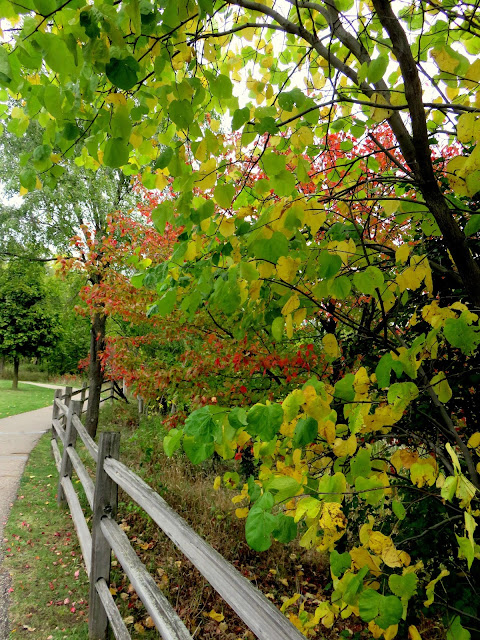 I would pass by my neighbor's house -- decorated to the nines in skulls, ghosts of white gauze and witches of black. And, in another eight blocks, I would be doing my rounds at the Ditch. No Harry the Heron, I fear. I suspect we are simply missing each other. But when I rounded the corner, coming out of the wooded section, what should I see but this. 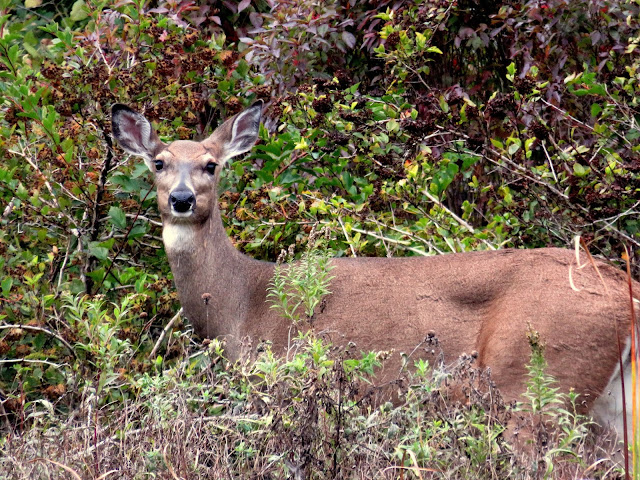 Oh, she was magnificent. Gently grazing, then chomping on whichever leaves she found most delicious. 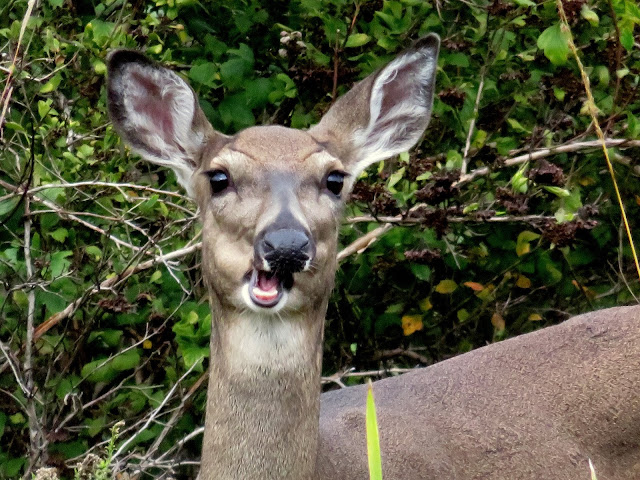 Alert to the traffic on the nearby road and the occasional walker, but unafraid. 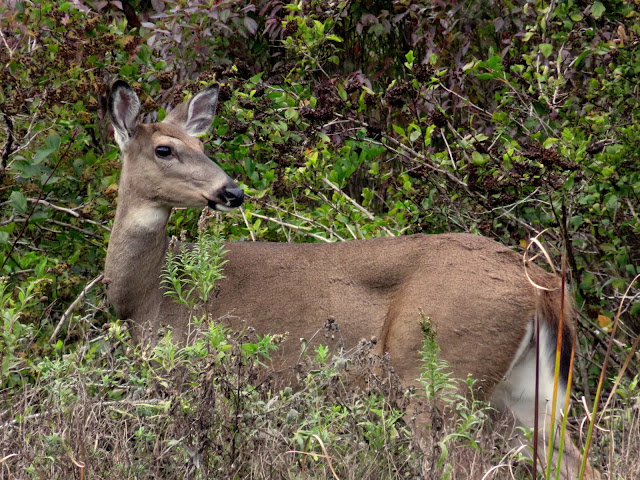 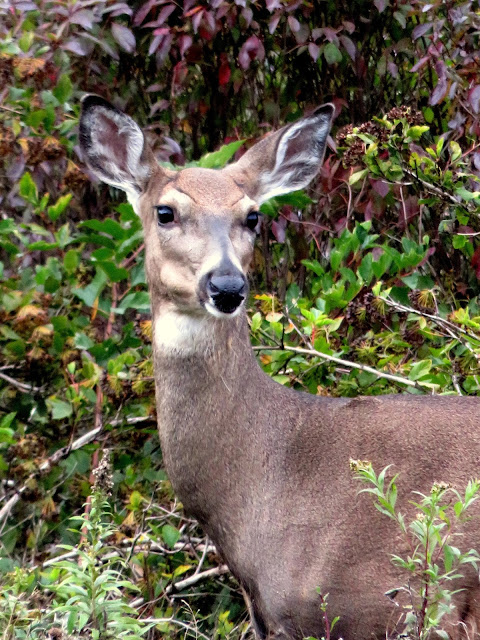 I made another loop and what should I see but... 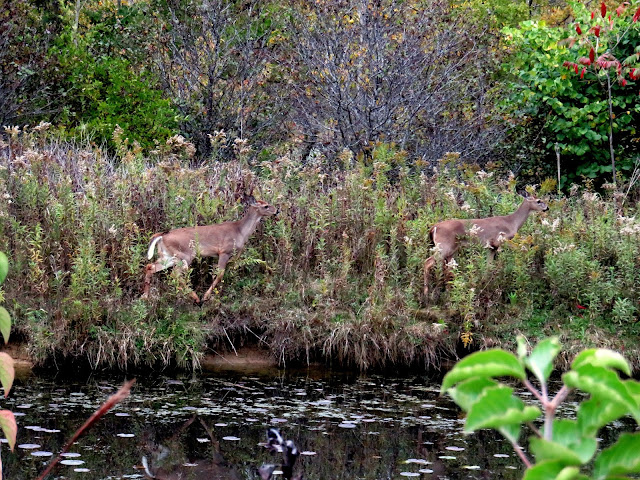 
There is much to be said for a step-lively walk. But there is much, also, in that gentle time where you stop, look, pause and simply gaze that what is before you. In another month or two, only the more hearty will keep up those walks, regardless of weather. And in a few months, only those who are willing to blaze their own path in the snow will soldier on. Where will our deer spend the winter? Perhaps on their island in the ponds. Waiting, as I will, for the spring.
Posted by Jeanie at 8:08 AM

Hello, the Autumn colors were slow to appear around here. But, we are seeing some now. I assume the dry summer did a number on the leaves. The deer are so pretty. Your photos and video are awesome. Happy Thursday, enjoy your day!

I hadn't heard the Nancy Wilson song before - very nice. We're starting to get some color, but not the bursts of beauty I usually associate with fall. Oh well.

So beautiful! We have deer in our neighborhood too. Paul and I have been walking in the mornings before the sun comes up and we often see them. Our winter won't be anything like yours (and I'm glad) but it will come. :)

Autumn is in full glory at your place. The trees, the landscape, are all beautiful. But those deer are really special and spectacular. The leaves here are just starting to turn. It's been so warm, there is really nothing much to see. I do love the views from where you live, though. And of course, I'm definitely not looking forward to snow.

Loved the pictures . . .
especially the one of the deer chomping leaves . . . great photo catch!
I agree . . . gotta love this time of the year!

You live in such a lovely place to see such beauty all around you. Fall has been slow to come to Georgia also, just stayed too hot. Now the leaves are turning and I see the deer on occasion. I enjoy your photos and writing very much!

What a beautiful walk and those deer, how beautiful they are. Yes, it is so sad when hunting season is on. I hate it! To kill those beautiful creatures.

Jeanie, what a beautiful walk to enjoy! We may get our first frost of the season this weekend! I cannot believe October is almost over.. where does time go?

Amazing, amazing animal the deer is. And something very special about it too. What beautiful captures you got of this sweet deer on your walk. And a lovely area to take a walk. It looks like you came pretty close to them, and they don't look startled at all. Oh, I love them so. : )

Oh, how I will miss October, my favorite month. Now bravely on to the holidays.

What a lovely post and thanks for the Nancy Wilson link. So nice.

Yes, we will all be waiting for spring. Ahhh! The sounds and sights of your ditch! I love it!

What a lovely post. Your neighborhood is so pretty! I always hate to see October go, too....it’s the end of baseball season and the end of our prettiest weather.

Lovely, lovely areas you live in!!! Sweet deer, too...

Hi, Jeanie! Sooo GOOD to catch up with you! We've been back from our trip for a few days. Really struggling with jet lag and post-travel getting back on track, but getting there--whew! I need some step-lively walking! LOVELY to see what's happening in your part of the world! When we were in PA lately, there was a lot of green still hanging around... we had hoped to see more reds and golds... Such JOY to see the lovey doe! BEAUTIFUL post, my friend!! ((HUGS))

Fantastic deer photos. Your colors look like they are starting. Late like us, but with the rain we had now they are all coming down. Ah, there is nothing better than a nice walk on a nice fall day. Happy start to your weekend. Hugs-Erika

What a beautiful walk you enjoyed Jeanie. Mother Nature and her fall crisp air and autumn colors and those beautiful deer.
What a lovely way to enjoy the day...........

Your neck of the woods is colorful, Jeanie. And kudos to you for spotting the handsome deers. Love to see you’re out and about and enjoying your beautiful “Ditch”. :)

Oh, Jeanie, I am so in step with you, whether it's the lively, step-walk or the pausing kind. And yes, we will be two of those who continue through the winter months. Btw, thank you for the music cue. It made this post that much more contemplative, maybe even a little melancholy. Your comment on our lack of colors was certainly put into perspective when mentioning all the devastation elsewhere in this great land of ours. Oh, and your heron? He's on our riverbank, right in front of our house! Obviously not the same one, but we have a pair (at times) which have made their home here in our region the past few years. We wonder where they'll spend their winter, or whether they're actually a sign that our winter will be much milder than typical.
Good, thoughtful post.

I'm one of the few who spends the hot Summer months eagerly looking forward to Autumn and the colder temperatures of Winter. Hubby says it's the fact we don't usually get all that much snow that makes me long for the days when it's cold enough for a chance of it. Perhaps he's right. Regardless, I do better in cold temperatures than hot ones in general, so I'm personally glad we're heading towards Winter right now.

The deer are such beautiful animals and you snapped some great shots!

I cringe when I hear the shots coming from the woods during deer hunting season. Our population of deer is so great, sadly, it has to be kept down.

I loved seeing the deer. You got some great photos of them. I've only seen one at my local nature center, although I know they're around. They tend to keep to some larger and more wooded areas a few miles away -- and the Johnson Space Center (believe it or not) has a wonderful, large prairie and woods combination where deer, longhorns, and assorted others roam freely.

I can't say I'm thrilled that October is over, but it seems we're going to have to move into November to get some cooler temperatures and more autumnal scenes, so bring it on! Besides, who doesn't like a little nip in the air?

It's wonderful that you have such beauty in walking distance, Jeanie. Taking a walk in places like that and watching animals is so relaxing. Hopefully the deer won't get shot during hunting season. It would be such a shame.
xo Julia

what pretty pretty deer!! Love these pictures. They do look quite calm...and not afraid. I just love their ears and big eyes. You sure got some great pictures here, thank you for sharing them with us! the weekend is here, hope you are feeling well, and have some enjoyable plans?

How wondrous. Don't you just love watching deer?
Enjoy your weekend, my friend.

Love your fall colors and the deer sightings, Jeanie. We woke to white again this morning. Hope your fall lasts a bit longer.

That photo of her chewing made me smile wide! Such sweet creatures.

Such a majestic face, hers:)
And the sound of that burbling water makes my heart sing.
Love to you and the ditch,
Jennifer

YOUR autumn looks beautiful!
So fun that you also have deer.
We are suppose to get snow in two days, this time is might stay.

Those deer pictures are gorgeous!

I feel like I didn't really get to appreciate fall around here as October was such a busy month. But we had an amazing time in Asheville and soaked up the fall colors in the mountains!

It's cold here - the high today is 35. Burr!! It's too soon for those kind of highs! I am hoping we get another warmer spell before winter sets in.

Dear Jeanie, I love everything about this post from the music to the video and the photographs of the deer! I love the chomping picture most of all, so funny and yet beautiful. Enjoy your walks.

Autumn looks perfect on your photos! We had only few nice Autumn days this year, now it's gloomy and foggy weather here :( I'm counting days for Spring :(

What a lovely walk. I could never kill such beautiful animals.

Jeanie, I'm trying to do a little catching up while I've got a few extra minutes. Your photos of the deer are spectacular! I always love seeing your photography.

Dear Jeanie, you are such a gifted writer! When I come for a visit you have the talent to whisk me away to another world. I love you for that and how you always dwell on the positives. Thank you for sharing all the beautiful photos and snippets of your life.
Happy November!