Before we go into this "jolly" post, I want to mention that I know this isn't always a happy season for those who have experienced loss. My article on Modern Creative Life, "Making Merry When the Heart Is Heavy," was just published, offering some strategies with dealing with the holidays when it's just hard to get out of bed. If you fall into that category (and remember, that  loss doesn't have to be recent), I send light and love to you and hope you'll find something useful there.

Cork Poppers and holidays go together like a hand in a glove! And this season, we were celebrating the wines of Austria, Germany and Hungary -- places our hosts, Roger and Meredith, had visited on a cruise last summer. 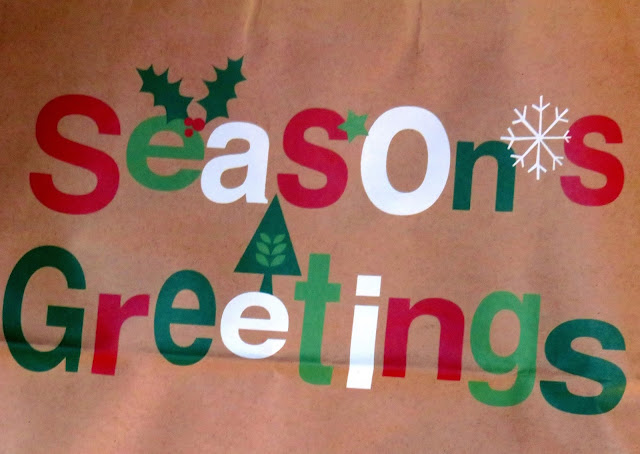 As always we began with wine and snacks. Rick made bread; Pat, Dick and Cheryl brought cheese and crackers. And we were off! 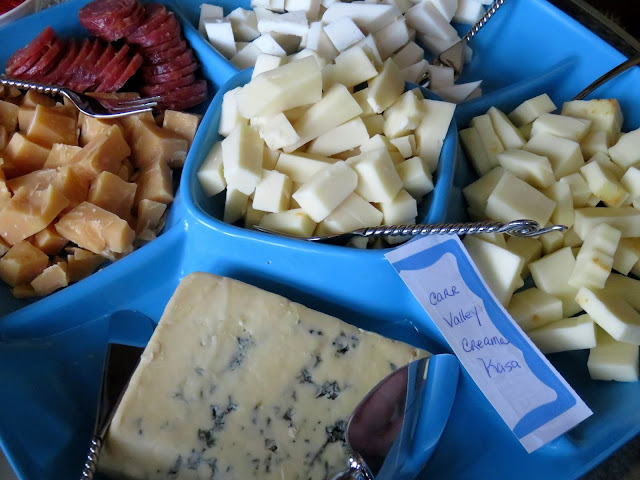 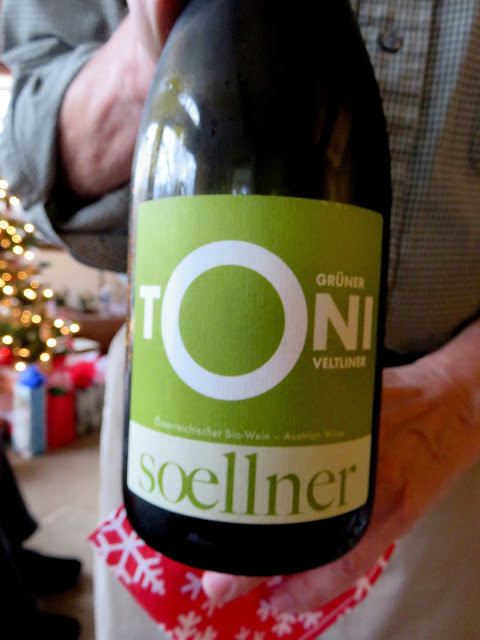 It was served very cold and I loved the crisp clean flavor. It used organic handpicked grapes and yest. "I could drink a lot of this really fast," I said, to which our wine guru Dick replied, "It's 11.6% alcohol so don't drink it too fast!" Cost: $15. 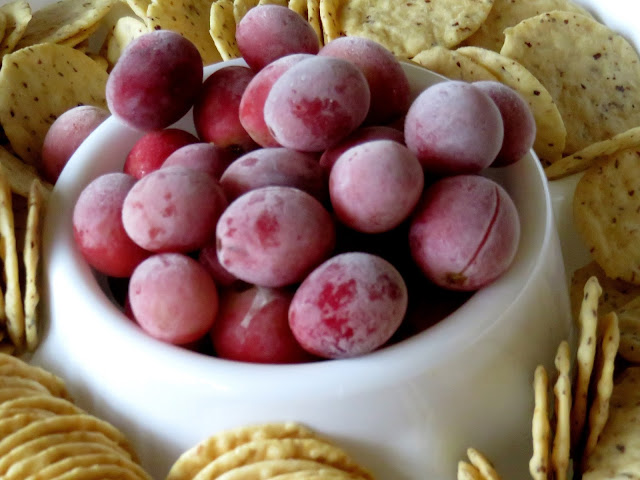 Next was an eastern Austrian wine called Hopler Gruner Velitner.2015 by Christof Hoepler, who describes himself as a "Winemaker for Normal Wine People." 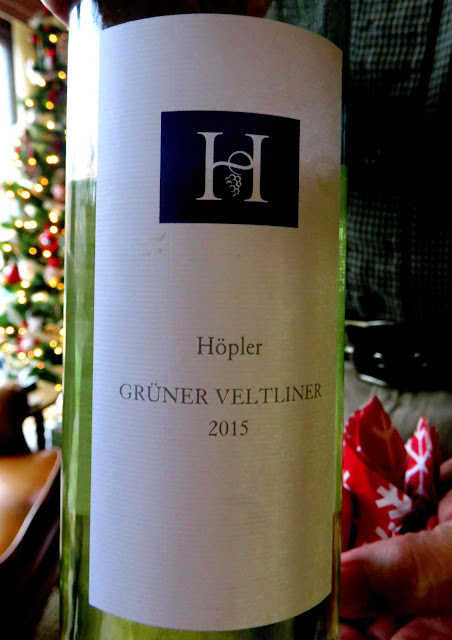 Cheryl, our resident wine drinker, liked this better than the first, while I was bigger on the first one. Perhaps it was because it hadn't been adequately chilled. It had a spicy, peppery vibe and was fruity but not sweet. $15.99. 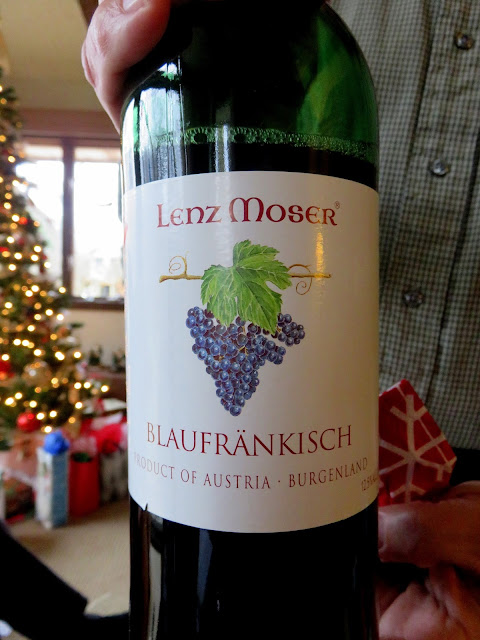 Third on the list was Leny Moser Blaufranklach, a 2013 red wine. This was another wine from Austria, hailing from close to the Hungarian border. It is thought that Blaufrankisch wine was first drunk by Germanic tribes in the middle ages.

One thing you should know about German reds -- the climate doesn't really offer the full-bodied reds that you will find in Bordeaux or in South America. It is far more likely that a German red will be more like a lighter-bodied Pinot Noir. So, if you like Pinot Noir, chances are a German red might be worth a try. If you are more of a Cabernet Sauvignon drinker, you might find it a bit light.

Pat, who brought this one, said "I don't like it. I don't even think I'd like it with a cheeseburger." Most of the rest of us seemed to think it was just fine, especially at $12.99. 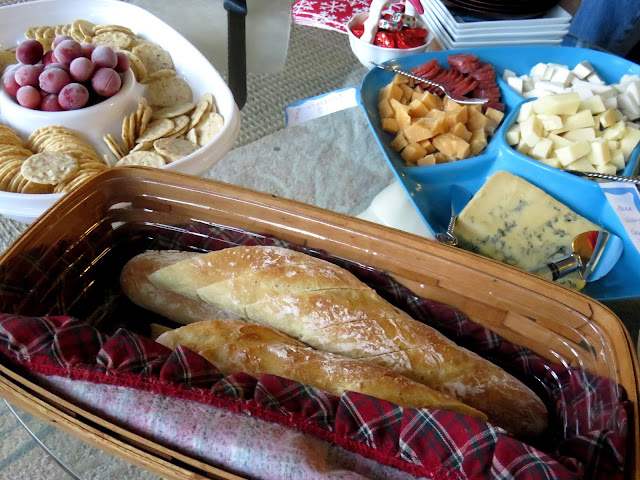 Just in case you think all we do is drink wine until we're in a stupor, relax! (That only happened once, and not to all of us!) I know I mentioned the really good treats we enjoy during the tasting including Rick's bread, crackers and cheese! But I want to remind you it's really important to eat while tasting -- and to drink a lot of water as well. You don't see them here but we all have our water bottles close at hand! 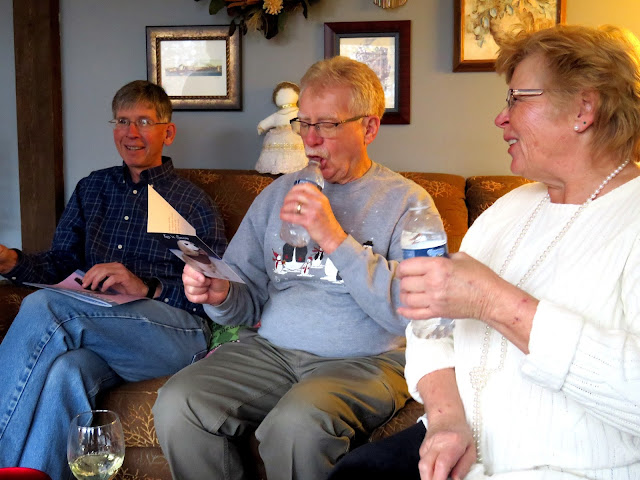 So, with that in our tummies, we were on to Bull's Blood 2013 by Egri Bakiver, a Hungarian wine. The word Bikaver means bull's blood. There are legends about the name. In 1552 a fortress was under attack  and under seige. The legend has it that the defenders were outnumbered and so to give themselves courage, drank large amounts of the local red wine. Of course it spilled all over them. As they ran toward the attackers, the enemy thought the locals had been drinking bull's blood and fled in terror. 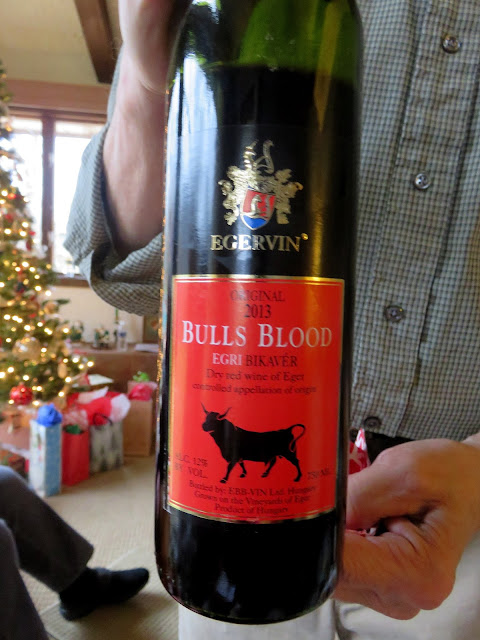 (Don't you love a good legend?!) This was clearly the best story! I wrote "This is very nice, peppery." Roger thought it tasted musty. A note was made that it should be opened an hour before serving. Cost: $9.99 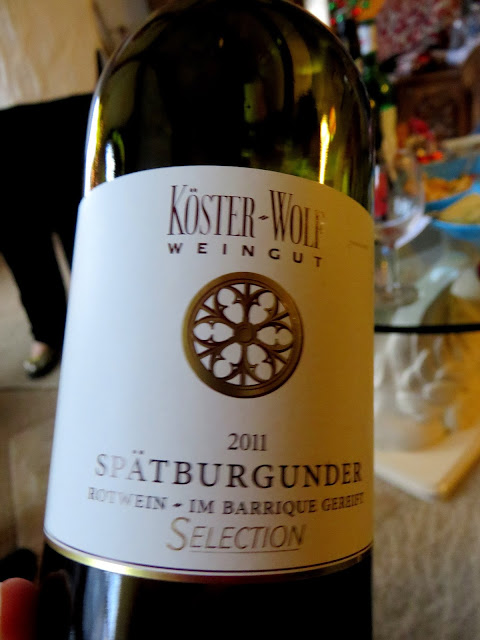 Barb, who brought it said it had a "skunky nose" and Dick called it "a dirty diaper." I wrote, "I'll stick with Bull's Blood." While Pat said, "It's better than mine!" However Rick noted that it "behaves well in the glass," meaning that the "legs" of the wine dipped appropriately. Cost: $14.99

My wine was next. It was called Affentaler Spatburgunder. and it clearly won the best bottle competition. (There was more demand for the bottle than the wine!) We agreed that it tasted like a merlot, a fruity light red. 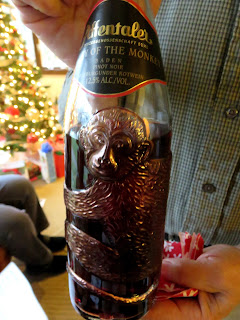 Affental is called the Valley of the Monkeys -- we don't know if there are any monkeys there, though. The bottle is a bit of a cult collectors thing and the company also makes a Riesling. The vintners of the area have been cultivating Pinot Noir (Spatburnder) since 1250.

I thought it was pretty mellow and Barb and Mike indicated that they really liked it. Rick thought it a bit sweet and said it was like "drinking kool-aid." Mike agreed they were all a little sweet but I didn't find this too much so. $14.99.

Our Christmas Cork Poppers always finds us doing a gift exchange and this year it was white elephant time. 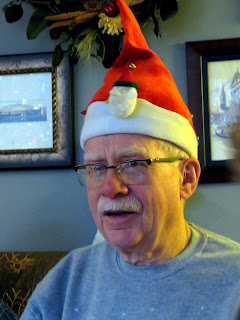 The thing about white elephants -- as you age, you start having some really decent stuff you want to unload because you are downsizing, so everyone ended up with some good gifts! 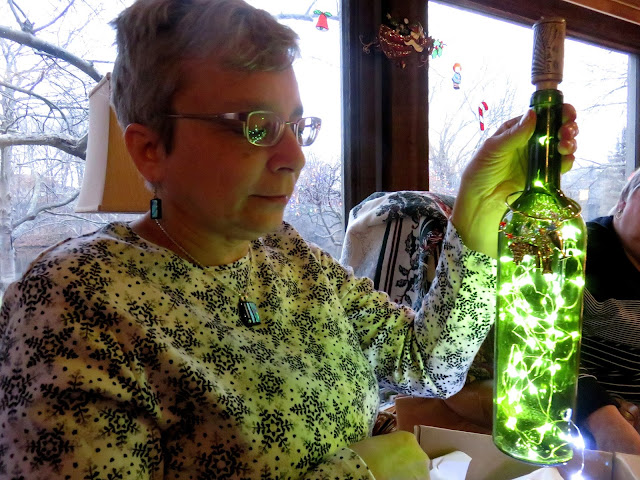 And of course, there was some trading going on! 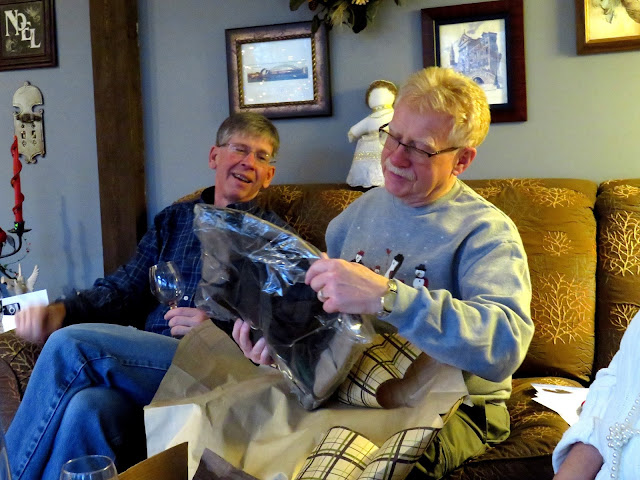 After the exchange, we moved into Meredith and Roger's dining room for a delicious dinner! 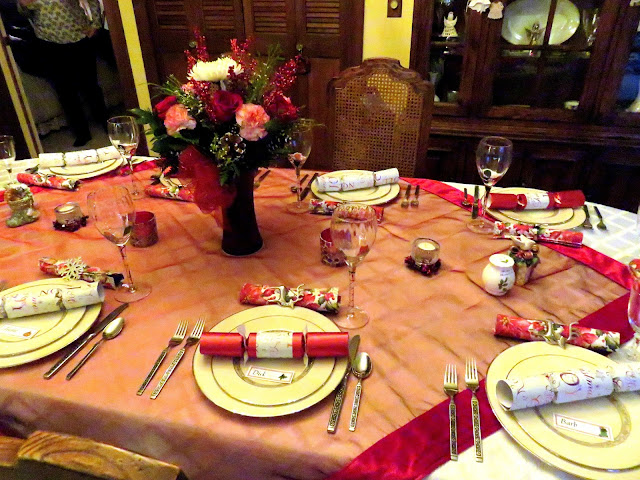 Meredith sets a beautiful table and there was a lot of Christmas joy with holiday crackers and paper crowns. 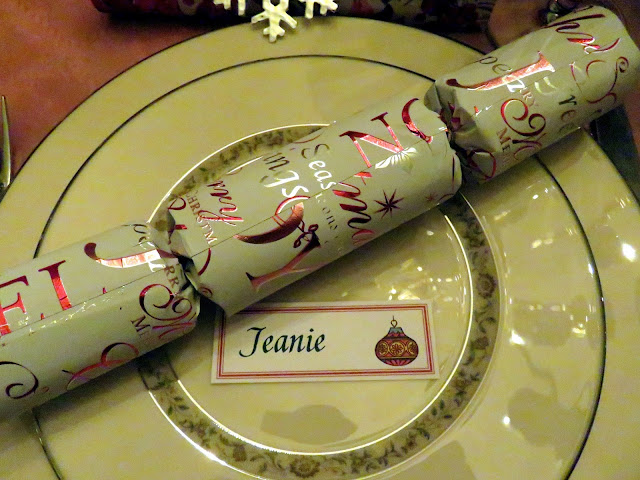 Finally, some photos of our wacky group (missing Anne and Clayton).  The photo of me with Barb is actually me with my fifth cousin! Someday I'll talk about the genealogy I'm doing but one of the things I discovered quite by accident is that my longtime friend Barb is really my fifth cousin, going through my grandfather's lineage! 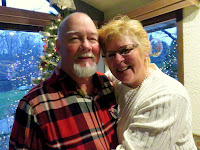 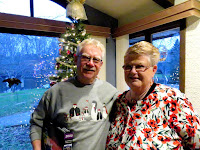 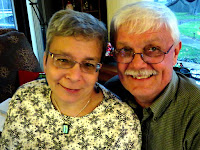 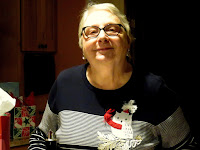 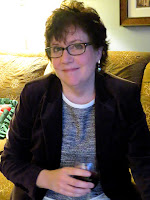 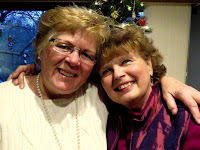 There is nothing we enjoy more than trying different wines. Even those who aren't big into wine enjoy our tastings because they are filled with fun. If you're interested in wine, check out the link to Cork Poppers at the menu on the top of the page! 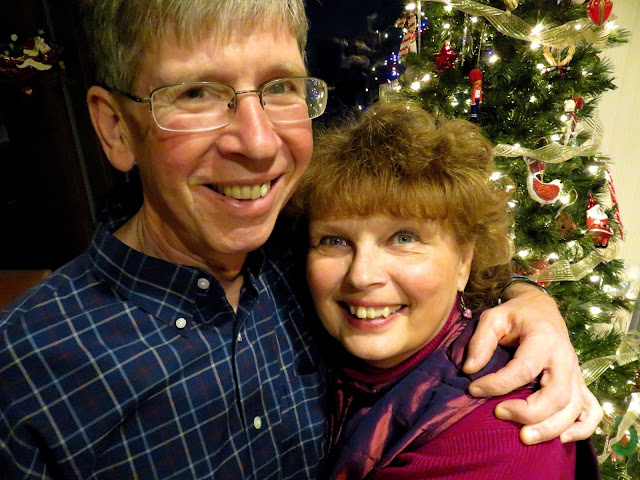 I'm Hungarian but I don't drink wine. But I did enjoy seeing this post.

As I've mentioned before, I'm not a wine or any alcohol drinker, but I love your take on wine. I always look with enthusiasm at your cork poppers posts. I'm not a teetotaler, I just don't care for the taste, or the way I get after a single sip. I found a dessert wine I fell in love with once, but didn't remember the name of it. I've never cared for dry wine, and dark wine like Merlot. I so appreciate your posts, though. They always seem to show how happy you and your friends are, and that's not the wine talking, either.

Not a big drinker, but I really enjoyed the education and your notes. I will definitely keep this menu tab in memory. Love that you enjoy all aspects of sharing the wines, food and friendship!

Looks like a lot of fun, Jeanie. And to end with a great meal...wonderful. I love wine and tend to stick to white but am easing myself into a few reds. I'm not a big drinker (only social drinking) and love to have a glass with a meal. Your photos are fun and love to see the tree in the background. Deb

How fun for your group..we enjoy wine..Jacques make s..and we buy some..whites and rosés..and some reds for guests..but I have to tell you I love his..WE have had Bull's Blood..years ago and it's funny I never forgot Egri Bikaver..I think because I saw it in writing a few times..one of my clients was a wine connaisseur and would share lists of wines..the best years for them..the prices..the kinds..so nice of him.

There is one we buy in Fl..Seven Deadly Sins..so much $$ here.
Wine is definitely more $$ here.

I love a wine tasting with friends. You tried some fabulous wines and looked like you were having a ball!

Great article, and glad you had a great time with your Cork Popper friends. That's cool about learning your friend Barb is actually your fifth cousin.

Thanks for the tips on the wine you served. I called drink because I am on blood thinners, but I do love wine.

Sounds like you ahd a wonderful wine and cheese gathering and then a delightful dinner.

The cor poppers looks like a fun group. I think you had a great holiday celebration! Some of those white elephant gifts look really interestiing. :) Hugs-Erika

Hi Jeanie! You always have the best of times! Love the festive atmosphere. Merry Christmas, my friend.
Be a sweetie,
Shelia ;)

Thanks for sharing your photos of such a fun time. Makes me wish I liked wine.

Your party and wine tasting sounds like fun. It is special to have great friends that enjoy each other.

Love the wine and pairings! Looks like a fun time with lots of good treats. I agree- water is important and so are the snacks. I think this looks like a great time was had by all! Thanks for sharing. :)
~Jess

Jeanie, it sounds like fun times with great friends! Wishing you a very Merry Christmas!

I love reading these posts and hearing about the wines you selected. The bottle you brought would be a perfect one for me to give my coworker and he LOVES monkeys. He refers to us as the 'helper monkeys' of our company. Ha. I love crisp whites that aren't too sweet so I will have to check out some of the German whites you had. I always associated German wines with super sweet, dessert-type wine (which is ok in moderation but something I can't drink much of!). Rick's bread is beautiful! And that cheese dish looks divine as I'm all about cheese and crackers!!

Your wine gathering always look so fun. When my tea friends gather we also must remember to eat too. Did you know you can get tea drunk if you don't eat too? Yep! The bread and cheese assortment looks delicious!

Seems like you had a lovely evening! I love wine but I am not an expert, so I probably would like all of them LOL. I am surrounded by vineyards where I live, a famous wine region in Germany. You can find the Affentaler monkey-bottle in every supermarket here.

The girls would love this post, Jeanie, as they have wine night sometimes. The cheese and crackers and bread and wine look so tasty, and what a great idea for some Christmas cheer with friends. :) Jess' husband's family does the white elephant game too, so I will be joining in on the fun Christmas Eve. :) Love that picture of you and Rick.