So many of you asked about my Lemon Meringue cake made for Easter that I promised I'd do a post on it. The recipe is Nigella Lawson's from her "Feast" cookbook. Here is the link but don't be turned off by the UK measurements if you live here. If you click on this photo from my cookbook, you should be able to see the quantities in "American Speak." The process is as she described. (If you can't, let me know!) 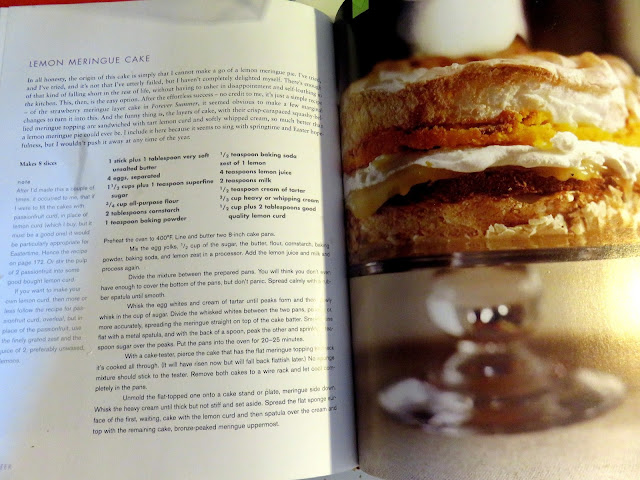 It is remarkably easy and not nearly so fussy as it looks.

You'll begin with making a very stiff batter that is spread onto parchment into an 8"pan. I used a springform which made it very easy to remove, but I suspect with good parchment and greasing regular pans would be fine. Since I only had one 8" springform pan, I had to do the baking in two batches which took more time. Otherwise, piece of cake, so to speak. 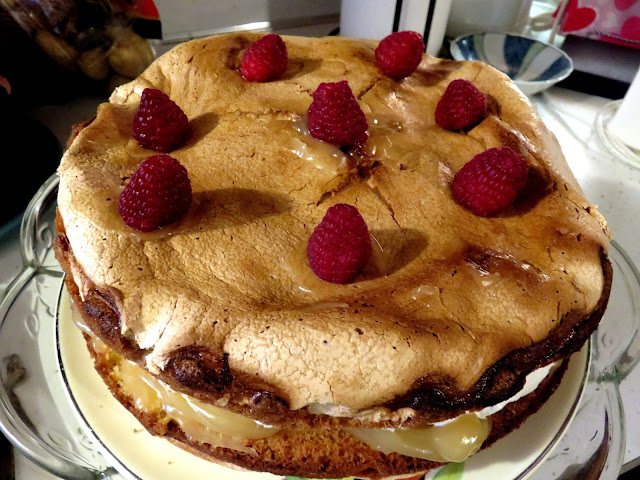 You divide the batter recipe in half to spread -- and it looks very thin but Nigella tells us not to panic! And it does spread. Barely, but it's fine in the end. 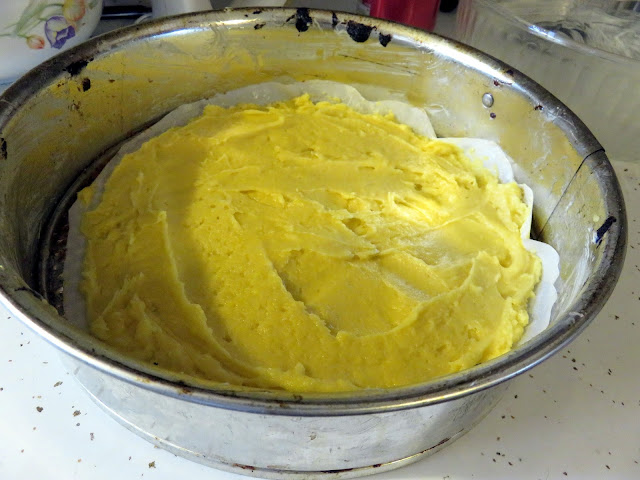 Then you'll make a meringue which will be spread over the batter. Time to bake. Check Nigella's link for timing. When you spread the meringue, make one pan with a fairly smooth spread, the other more "peaky" and pretty (this will be your top)
. 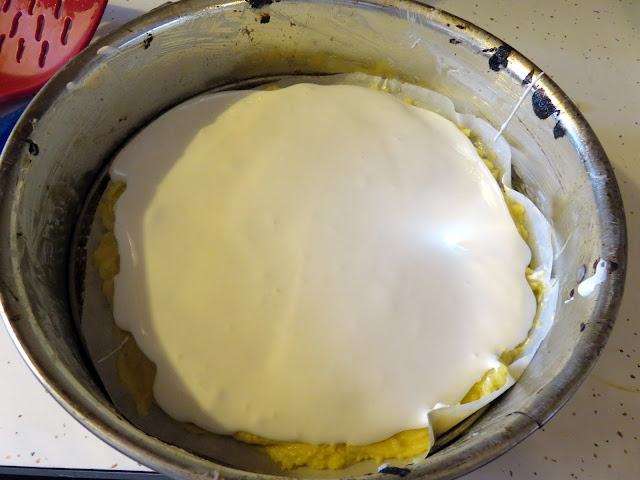 After they cool you get to the fun part! 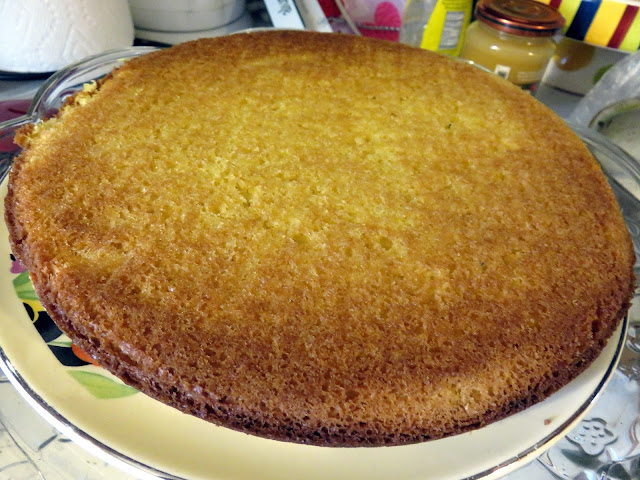 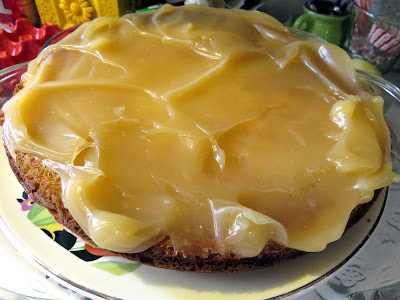 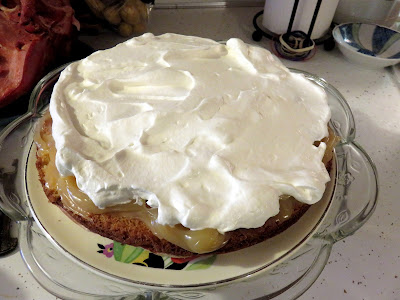 It really doesn't need it but my meringue got a little browner than I had wished so using lemon curd as "glue," I stuck some raspberries on top.And since it was Easter, added some robins eggs and macarons along the side. 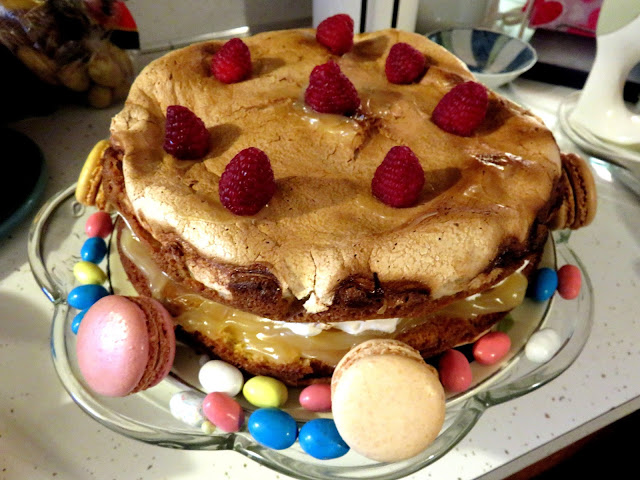 I was a bit panicked when I made this because I'd never done it before and didn't have much of a back-up Easter dessert plan (apart from candy and the Trader Joe macarons, which are a pretty good substitute for the real thing!). I'd already decided if it didn't work I would scoop it into champagne glasses or dishes. I didn't need to -- but it was great serving that way for leftovers!

I think you could also make it as an individual "cake," outlining ramekin-sized circles on parchment and spreading the cake and meringue within the circles. I don't THINK the cake batter would spread and I'm not sure how cooking time would change but it might be worth a try. Then assemble individually. could be interesting -- but who knows?

And would I make it again? You bet!

This post is linked to Thoughts of Home on Thursday and Talk of the Town. Check out other fun links and get loads of inspiration at both of these sites!

Email ThisBlogThis!Share to TwitterShare to FacebookShare to Pinterest
Labels: cooking, Cooking by the Book, recipes

That cake looks divine and how great that it wasn't too hard. the lemon curd sounds so yummy and makes it extra springy!

Lemon curd is one of my favorite things. I've figured out how to make it in the microwave when I don't buy it from Trader Joe's. Your cake sounds like a great way to eat it, though just eating it with a spoon is not actually bad either! (Though not for a holiday).

I have a very Pavlovian response to this post! Your cake looks absoultely delicious.

Your Lemon Meringue Cake looks scrumptious. I love anything with lemon. :) I think the whipped cream and raspberries on top make it! I agree, Trader Joe macarons are pretty good, huh? The robin eggs and macarons around your cake look very festive for Easter. I wish I had a piece to go with my coffee this morning. :)

Looks like lemon deliciousness, Jeanie! One of my grandsons is crazy for lemon! (He'd love the chocolate eggs and Macaroons, too...)

Have a Daily Cup of Mrs. Olson said...

Oh it does look so yummy! I had two spring form pans and hadn't used them for so long so I donated them to our local thrift. Now I am looking to find one or two again. lol!
hugs,
Jann

Goodness. That looks incredible. And to think you were worried. Apparently you are a fantastic cook! And it shows, too.

Oh my goodness Jeanie, this looks SO GOOD! I must make this; my mom made the best lemon meringue pie, but this looks great since there is not crust? I MUST TRY THIS!

Wow, this looks delicious. Thank you for sharing the recipe with us at Talk of the Town.

That's really great, my lovely, thank you for sharing this wonderful recipe ... I'm taking note, we all so love meringue and lemon pies !

Sending my dearest love, hugs and more hugs for wishing you a most joyful remainder of your week, dearest Jeanie, with much, oh so much thankfulness

Looks delicious! Thanks for sharing this!!!!

YUMMY! This looks delicious. And it seems pretty easy to make. Glad you shared this with us. Hugs-Erika

Looks delicious and sounds like it too. I love that you had a backup plan with pretty glasses if needed. I'll have to remember that one. :)

The best lemon curd in the world comes from Michigan -- from American Spoon. It's so far superior than anything I've found in grocery stores, I can't even begin to tell you.

It's too late for meringues this year, because of our humidity. Trust me on that one. But the recipe is going into the files for whenever the humidity drops -- maybe October!

OMYGOSH...what a gorgeous cake and I know it is SOOO delicious.
Lemon is one of my favorite things in the world ...

Woo-hoo... what a GORGEOUS cake, Jeanie! Feasts is probably my favorite Nigella Lawson cookbook. And I've been wanting to make this Lemon Meringue Cake for ages, but have never had a chance, or occasion I should say for serving up such a big, lush cake, as I don't think leftovers would keep well. I like your idea of making it up as little individual mini cakes....hhhmmm... But I WILL make one day... have to, as I love lemon meringue pie--lemon anything, really--so can easily imagine the happy of eating it in cake form! mmm... Happy Days, my friend ((HUGS))

Did someone say lemon?!? SO making this.
Yum.

Oooooh doesn't that look tempting.
We are still trying to come down from all of the treats we had all over France.
Yum Yum Yum
oxo

I am crazy over Lemon, in fact it has just about replaced chocolate for me! Except for an occasional Dove chocolate:)
Love this cake Jeanie, and I will have to give it a try once our Texas humidity calms down!
Great to have you join us my dear at TOHOT!
Hugs,
Jemma

Anything with lemon curd has my name on it! Yummy. Thank you so much for linking up to Thoughts of Home on Thursday. You make our gathering a happier place.

Well fancy me, who's have known you are friends with Nigella?! That recipe looks amazing and by the time I get back from my trip the lemons in our garden will be ready for eating - yummy!
Wren x