Roadtrip East and a Celebration

I love road tripping! And when you can combine business (Rick's) into fun (for both of us), it's all the better. 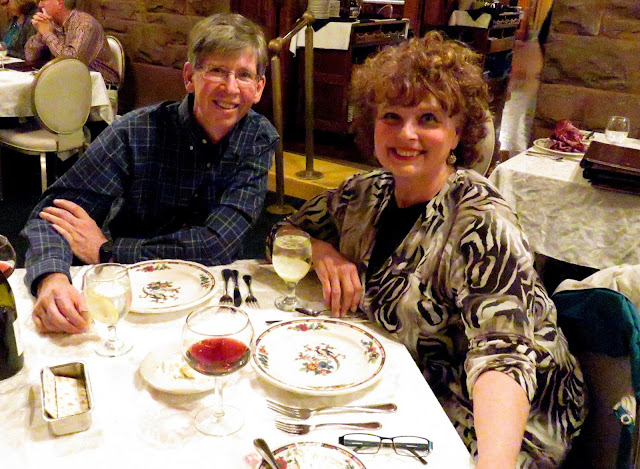 We were headed East, the ultimate destination being Massachusetts, where we would be hawking his wares (software, that is) at a trade show. But the first day of the trip took us through Canada and into upstate New York, where we stopped for the night in Geneva, NY. 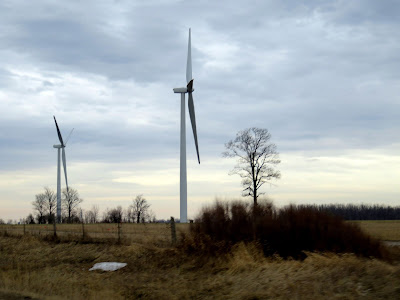 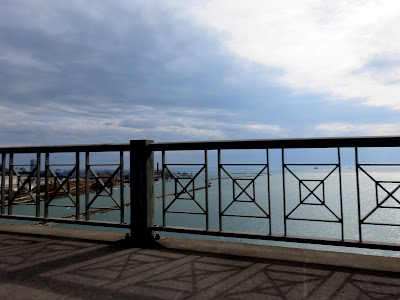 A dear friend had given us the equivalent of a dinner gift certificate at Christmas (we pick the restaurant!) and we decided to use the occasion to celebrate 20 years together. (Actually, 23 if you start from when we met!) 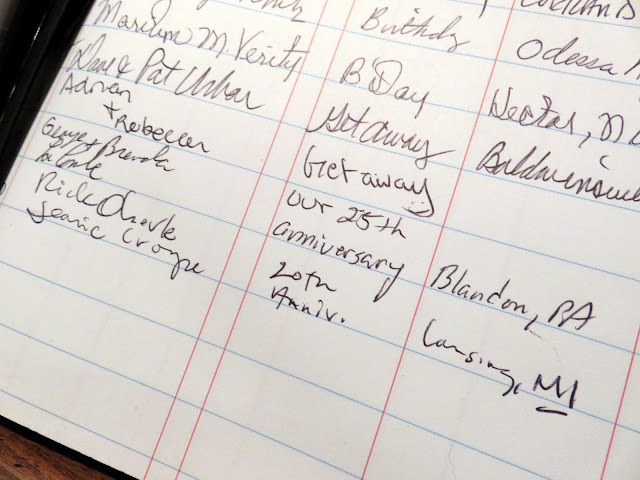 For all intents and purposes, you could call it an anniversary dinner, though contrary to popular opinion we aren't married and live in separate houses two blocks away from each other. We figure that this arrangement has kept us together when closer quarters may have failed! I think of Greg and Kevin, Rick's son's, as my practically-step-kids or loaner kids, as we've been together since the boys were 7 and 10! 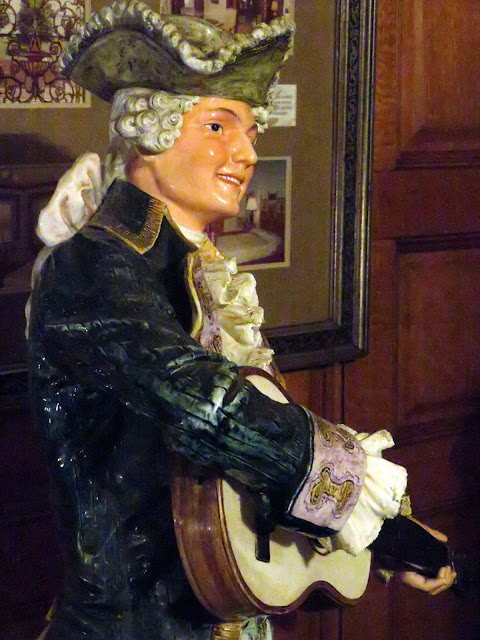 We met when I went to look at the duplex he was renting in March 1993 (I didn't take it and ended up across the street). We were neighbors but not particularly close until after I moved a few blocks away a couple of years later. This occasion was really a celebration of two dates, three years apart! 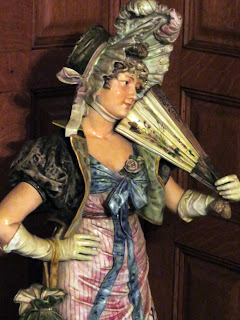 So, the timing was right for us to use our gift while we were on the trip east and settled on Edgar's in the beautiful Belhurst Castle in Geneva as our celebration stop. And it was fabulous! 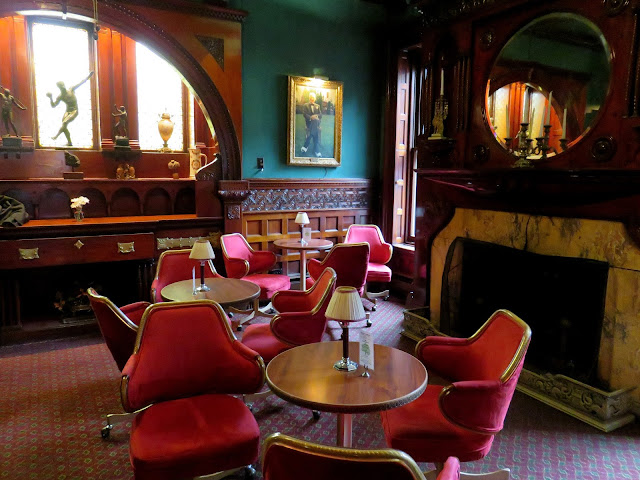 Belhurst Castle was actually build as a private residence between 1888 and 1892. It's an imposing building, located on Seneca Lake, one of New York's Finger Lakes. The brochure tells me it is built of sandstone in the Romanesque Revival style and is listed on the National Register of Historic Places. (A more comprehensive history of this fascinating home can be found HERE.) 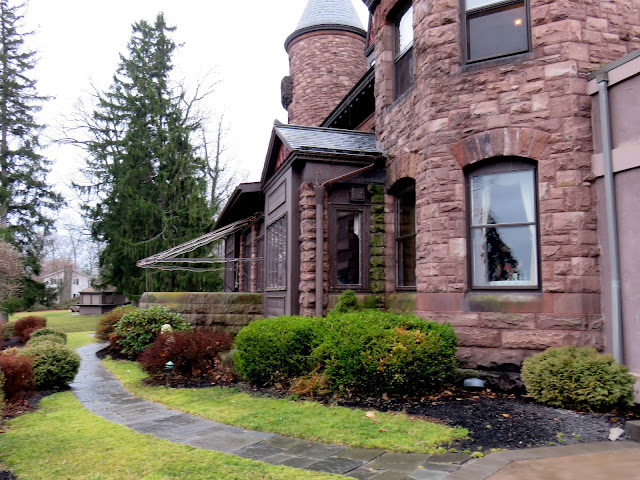 We only saw its main floor, with an imposing porch (converted into a dining area) and several smaller dining rooms. A cozy bar and a more informal restaurant were down the hall. The upper levels are used as hotel rooms (and no, we didn't stay there!). 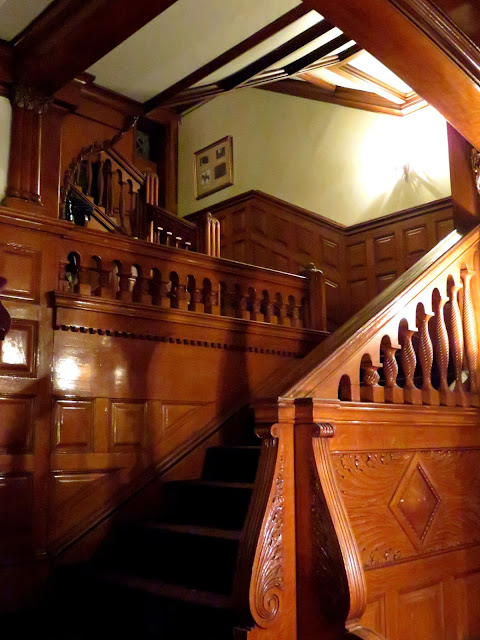 It's earlier history included use as a Prohibition speakeasy, a supper club and a casino. 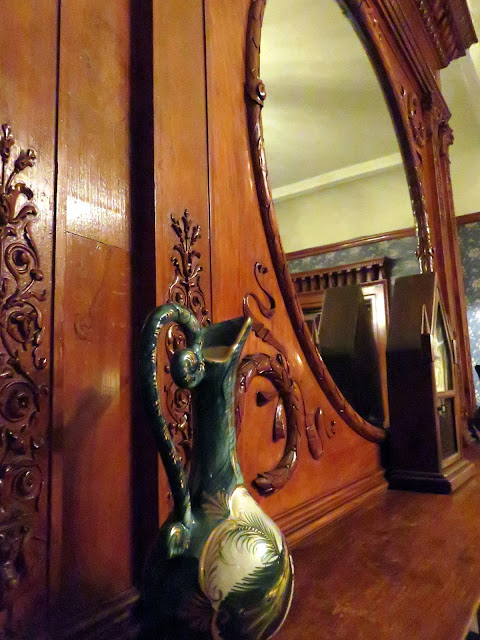 There are wonderful touches everywhere you looked. One of my favorites was the magnificent fireplace with a mosaic of Neptune. 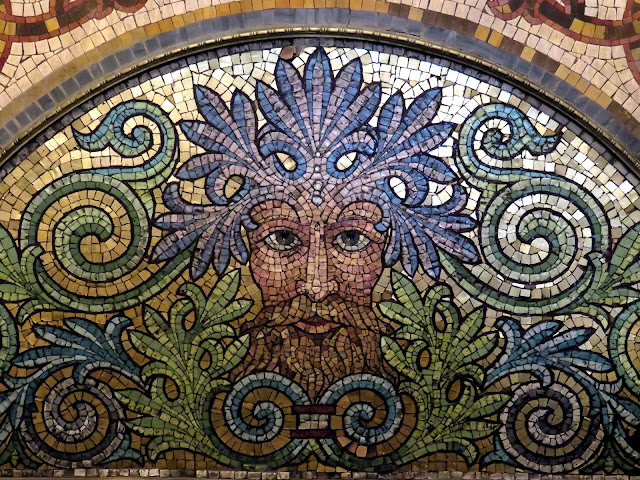 And as you might expect, dinner was terrific, from the bread and crackers with three types of butter to the soup (seafood bisque), salad, main course (salmon for me, a super pork chop for Rick) and dessert (apple raisin bread pudding). We had looked at the steak and our server warned us that the night before someone had found it tough and since it was the same cut of meat, she wouldn't recommend it. I found that honesty refreshing. 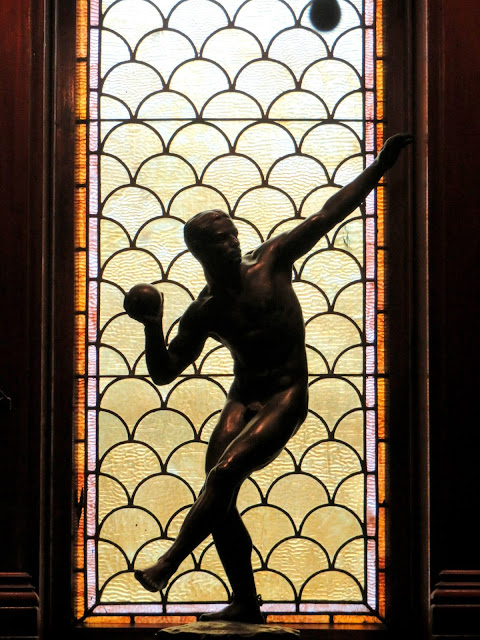 When they brought dessert, it was accompanied by chocolate covered strawberries. That would have been dessert enough! 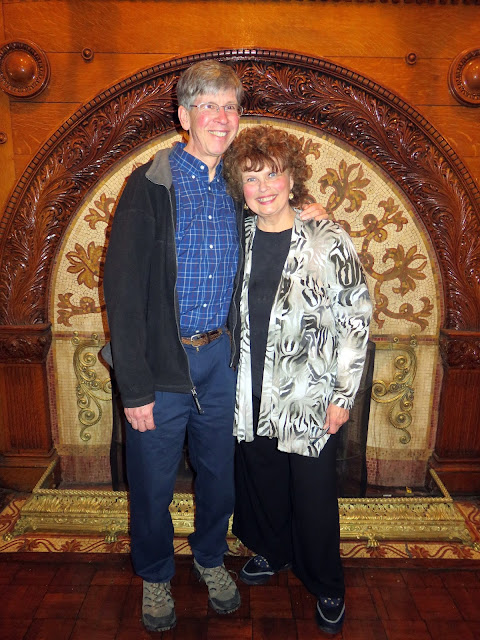 Next time we'll visit a little more of Geneva. It's a wonderful place! (This post is linked to Thoughts of Home on Thursday! Check them out for other fun links!)
Posted by Jeanie at 10:43 PM

My dear, what a wonderful tale of love! You enjoy the celebration across Canada and New York as life is short. You both look like happy youngsters!

What a great start to what I hope will be a memorable road trip! Congratulations on your 20th anniversary! I think your arrangement is the best: separate houses and lasting love!

A beautiful post. Happy Anniversary to you both. It certainly sounds like a wonderful way to celebrate and you both look so very happy :-)

What a wonderful celebration, and what a perfect venue for your celebration dinner. Of course I loved the photos of the two of you, but the photo of that staircase, and the detailed woodwork, is fabulous. I'd live happily in a place like that -- as long as I had a large enough staff to maintain it. I can't get my own place dusted!

HI Jeanie! A great celebration for you and your love. I can see the love and happiness on both your faces. So glad you had a fun time. You know I live in upstate New York for the last year and a half! :) I think Geneva is about 200 miles from me. Now I want to go there and try out this place! Thanks for popping in to see me.
Be a sweetie,
Shelia ;)

What a lovely way to spend the day! I just cannot get over all the stunning woodwork. You should link up this wonderful post at Thoughts of Home on Thursday.

What as perfect way to celebrate a landmark anniversary! That place looks beautiful. I love the wood work but I REALLY love that mosaic fireplace!! Your meal sounded wonderful and I love that the server was honest with you and warned you about the steak.

Can't wait to hear about what else you did on this trip!

Jeanie, What a wonderful trip to celebrate your time together, twenty-three years is a lot. This looks like an amazing place to spend time and your dinner sounds divine, nice gift too! Enjoy your trip, you both look so happy living and loving life. Happy Anniversary dear Jeanie……………

Sounds like a wonderful way to celebrate, and your desert sounds delicious (not just the chocolate covered strawberries, but the apple raisin pudding too).

Just the honesty about the steak would be enough to make me think it was a place worth going back. OK, so I wouldn't have had the steak even if it was recommended, since I don't eat meat or fish, but you have to admire a place that is honest enough to admit to possible problems with an item on their menu.

What a lovely place to celebrate. So glad you could get away for a little adventure.

Wow, Jeanie! I learn so much about you each time I visit. I'm super impressed with your arrangement of 23 years. It seems like a lifetime, yet has probably seemed like no more than a heartbeat to you. What a fabulous post and way to celebrate.

It looks like a beautiful place to celebrate your anniversary. A great beginning to your road trip!

Oh my, what an amazing house that is. You both look so happy - I hope the rest of your road trip is equally fun. I think it will be :)

What a beautiful spot to share a celebratory meal. The woodwork you showed is incrediable.

What a fabulous house and a very interesting history. And I think your domestic arrangement is most sensible. My "hubby" and I have been happily unmarried for 16 years - though we do share the same house. I'd love to know the name of the book you mentioned on my blog.
Debs :)

A lovely place to celebrate! Thanks for sharing :) You are a beautiful couple. HAPPY ANNIVERSARY!!!!

Such a sweet LOVE story is yours and Rick's Jeanie! I admire how you live apart, but how it works for you. I think you've got the right idea! ;) BIG CONGRATS on your BIG anniversary! And what a beautiful place in which to celebrate... WOW... wow... So glad to see the photos, and especially yours and Rick's smiles :))) Happy Days, and MANY more happy years together, you two!! ((BIG HUGS))

Funny that you live apart from your sweetheart, yet still have a romantic relationship. Glad you had such a wonderful time, Jeanie.

A perfectly lovely and special place to celebrate your beautiful time together ♥
Here's to many many more sweet years together dear Jeanie !
oxo

Congrats on your twenty some years together! And what a lovely road trip. Thanks for sharing and those photos are marvellous. I'd like to go on one some time ... oh, who knows when. But to the U.S. again for another road trip is definitely a possibility. :)

Celebrating in a castle - you guys know how to party! Love the pics of the two of you and the opulent surroundings. Happy Anniversary!