Our last project of the 2015 season at Southern Exposure. Sigh. Our task? An elegant "White Christmas" swag, similar but very different to the teardrop swag. 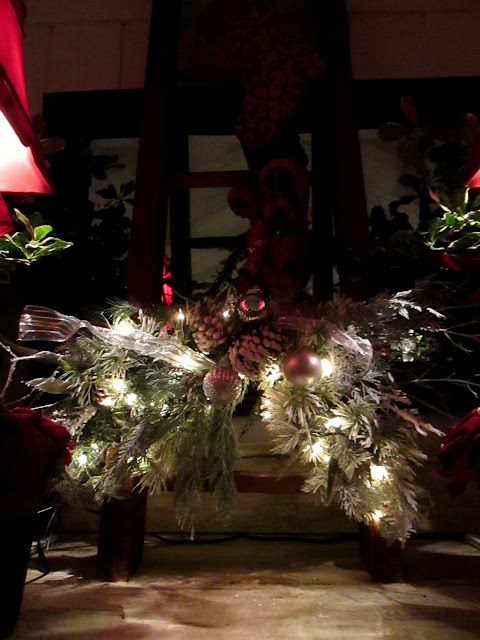 We were in the Hog House this time, our first time eating in this building, which was decked for the season. 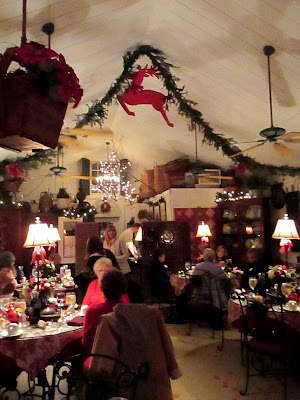 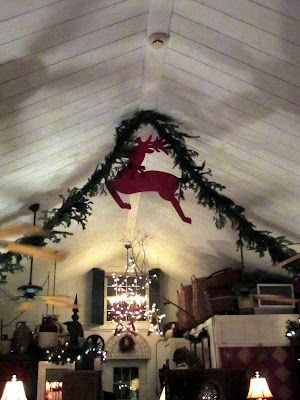 When we walked in, we immediately noticed the evening's project, hanging over the fireplace mantle! Charming wooden shoes were hanging in place of stockings, stuffed with goodies. 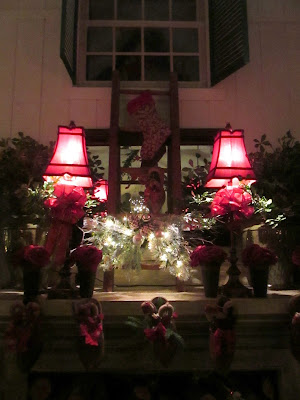 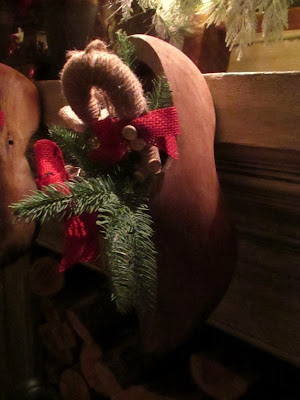 At Southern Exposure they make use of every inch of space and I confess that even though there is a lot going on, I never feel it is too much! 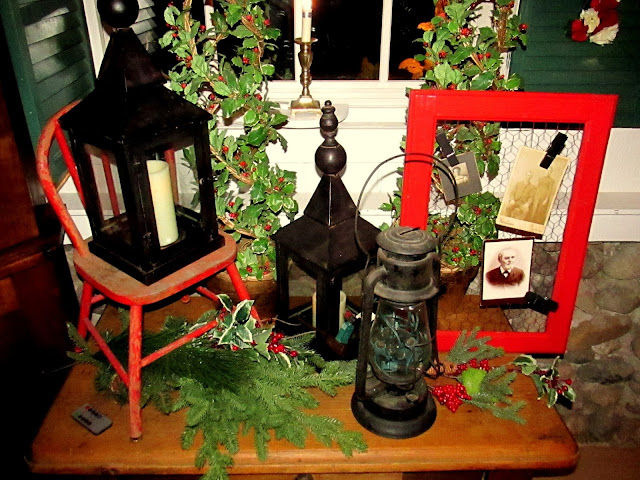 And of course there are charming vignettes everywhere! And the table settings are wonderful! 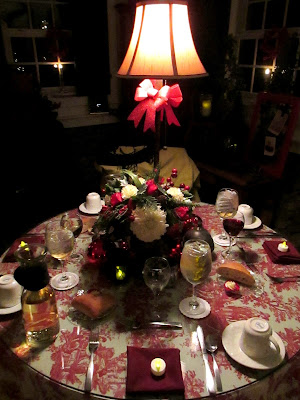 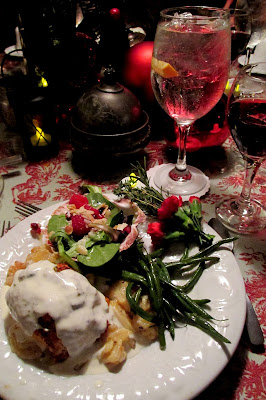 As usual, we started with dinner and Chef Elsie outdid herself with a glorious chicken dish with a wonderful sauce which she described as "boursin and cream" (or maybe it was half-and-half). Either way, it was to die for and she said it's incredibly easy and wonderful on any number of dishes. One of the nice things about being in the Hog House is that is it smaller than the Milking Parlor dining room and we were at tables of four. Jan and I made two new friends and enjoyed our dinner with a lively conversation. We found we had much in common and hope to be there again together next spring! 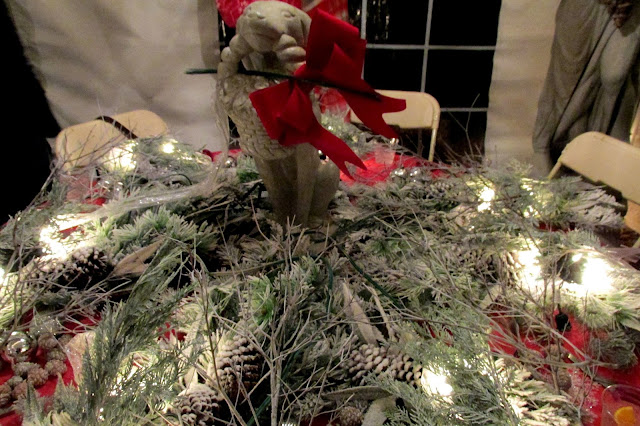 Then it was off to the craft tent. The four of us stayed together, joined by several other women. We immediately saw an abundance of flocked greens, natural cedar and twigs, silver balls, snowflakes and pine cones. 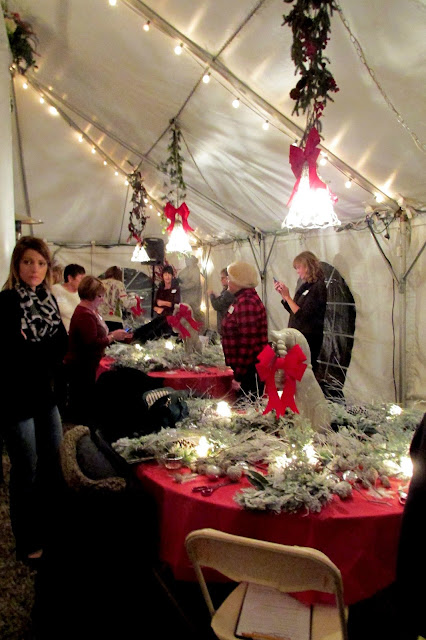 Micah, our floral designer/instructor had a hard time making us all wait to dig in until he had given instructions! But then we were off to the races. 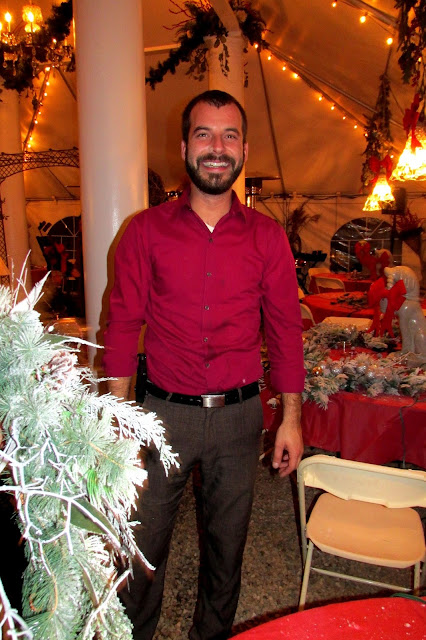 Meanwhile, Scott, one of Southern Exposure's owners (who had earlier spoken about the religious and historical significance of the various greens and materials used in the project) came around and served us coffee, wine or water! I think most of us were too busy to sip! 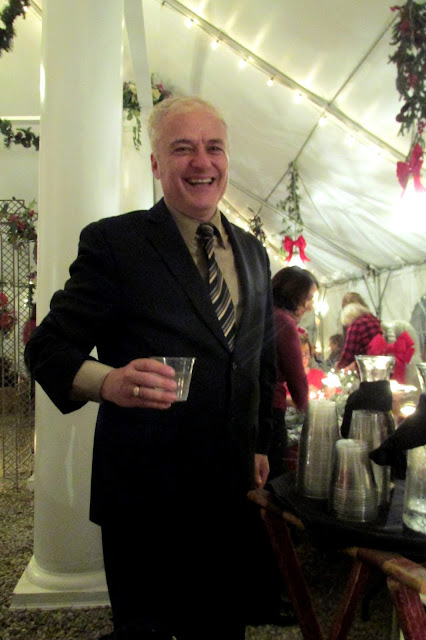 The craft tent had its share of decorations, too -- beautiful lamps over each workstation and more pretty holiday vignettes. 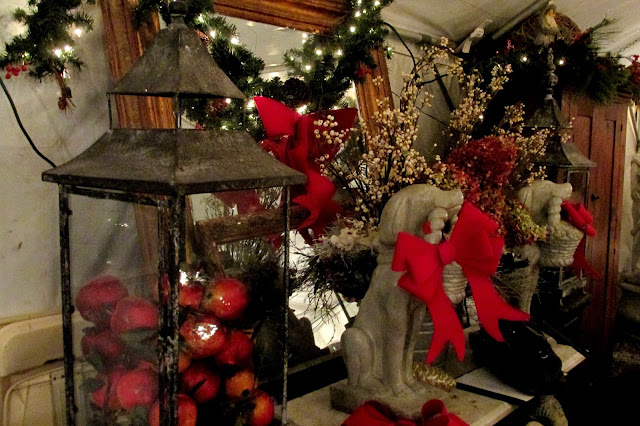 There was a fire going and Elizabeth the Chicken mingled with the group! 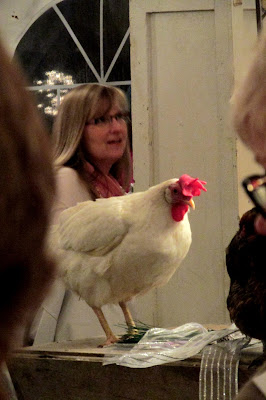 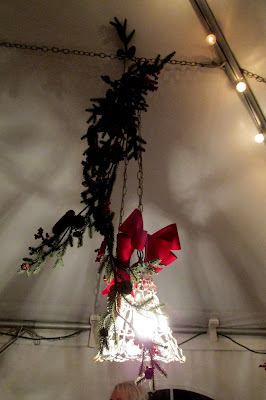 The end project was terrific.All four of us were happy! 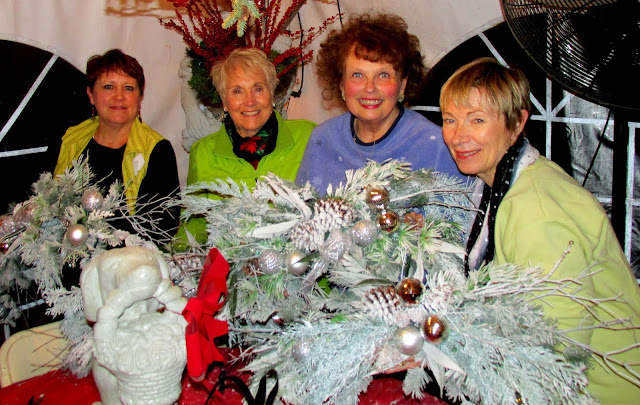 And I have a feeling that this White Christmas swag is lighting up lots of homes today -- and will for years to come. 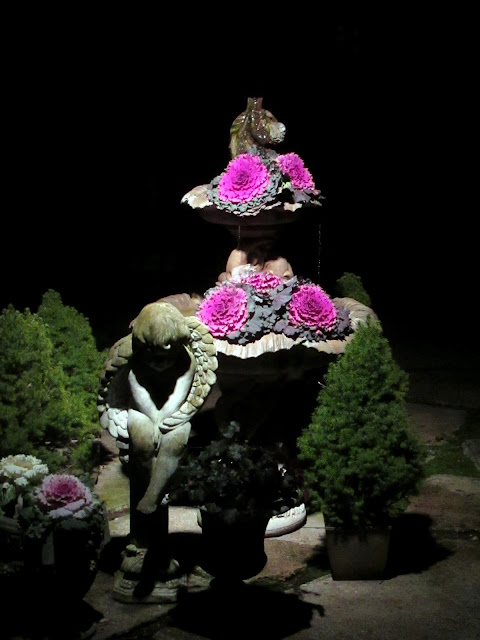 Alas, time to say farewell to Southern Exposure for another season. But one this we all agreed on -- we'll be back in the spring!
Posted by Jeanie at 4:30 PM

Everything is very beautiful from the decor and the table settings. I love it all. What a wonderful way to enjoy part of the Christmas season!

Oh, my goodness. I want a Southern Exposure near me. Your photos make it look so inviting. Thanks for taking us along.

I'm so glad you have this place, and that it gives you such pleasure. Personally, I think the chicken is the best part of it all, but that's just me. On the other hand, she is white, so she fit into the theme perfectly. By chance, can she cluck "White Christmas?" That would be the best. Chicken carols, to go along with the cat carols!

Me, too! I'm charmed by Elizabeth the Chicken.
Happy Holidays, Jeannie!
XO

Lovely decorations -- all with the spirit of Christmas.

What an elegantly beautiful project!

Hello jeanie!!!! I love swags and I can't have enough of them!

Sounds like a fantastic time was had by all once again. I'd want to go back in the Spring too!

Always love to hear about your craft experiences at Southern Exposure. You all sure had big happy smiles on your faces! I think even Elizabeth was smiling! I love all the red accents.

Looking forward to spring and your next visit. And, hey! You were so busy that you didn't have time to sip your WINE???

What on earth will you and Southern Exposure do for an Encore?
And will Christmas itself be a bit of an anti-climax when all this jollity and happiness comes three weeks before the feast?
What wonderful decorations!

The pictures are so amazing!:)

Oh how I would enjoy visiting Southern Exposure. Everything about it is so appealing and magical. Surely you must feel as though you have entered another universe.
Love it all!
Jemma

Beautiful pictures and so much Christmas cheer!!

The four of you look very happy with your wreaths. What a lovely place! It certainly is a place for joy and fun. I do like the picture of the chicken, too.

What a gorgeous event! Love it that Elizabeth was wandering around enjoying the party too.
Merry Christmas!

Fun! You look so radiant and happy in those photos - I can tell you are in your 'happy place'. And how fun that you made some new friends. I imagine you'll cross paths with them at future workshops! And the finished products are so beautiful! Well done!

Love the White Christmas swag, beautiful and you will enjoy for many years I'm sure. The fun of it all and the beautiful decorations and of course food and friends. Jeanie, you are always having so much fun!
Thanks for sharing this………….