Road Trip: Side Trip to Oberlin


When Rick made his bike ride from Lansing to Cleveland (a three-day ordeal) his second night was spent at Oberlin, a small college town about an hour from Cleveland. He was so impressed by the town and college that he wanted to show it to me so we stopped on the way home. 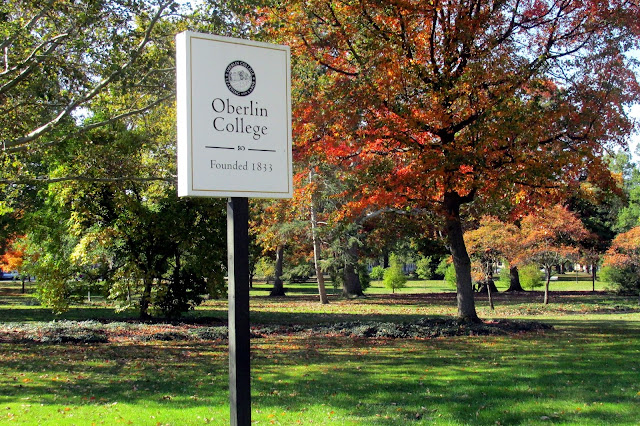 And he's right. The town is charming, though typical. It's a cute college town with a great mid-century modern hotel (that is being torn down for a modern redo) and the typical shops and restaurants you might see in a small town. 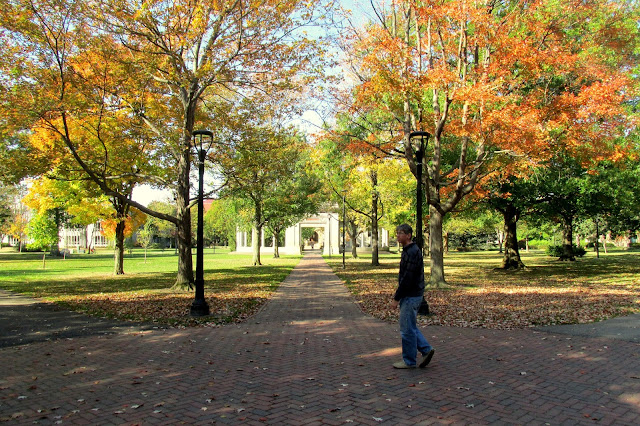 But the campus was really special. It's very small and there would be no trouble getting from one class to another in a short period of time! And of course it looked beautiful in the fall on a sunny, crispy, orangey day! 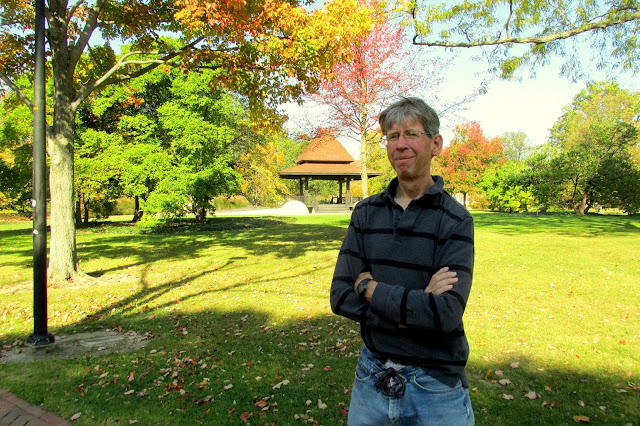 I thought this was interesting. Oberlin was founded in 1833 by Presbyterian ministers (it is a private school). It was the first higher learning institution to regularly admit women and African Americans, beginning in the 1830s. The Oberlin Conservatory of Music was the first of its kind in the U.S. and is internationally renowned. We scouted around the conservatory building trying to find a musician who was practicing but most of the students were on fall break. This is mid-October. I do not understand fall break. Who needs a break after two months of class? 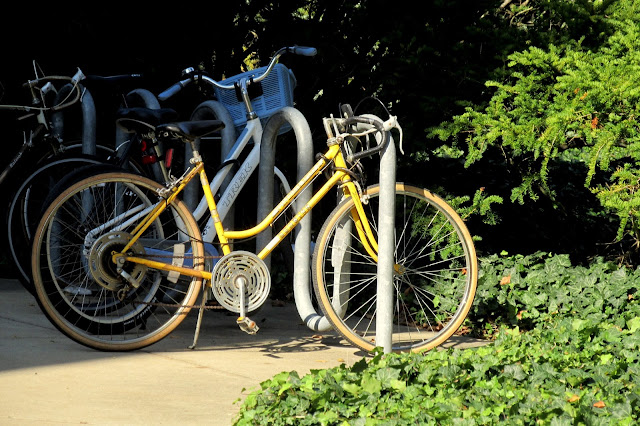 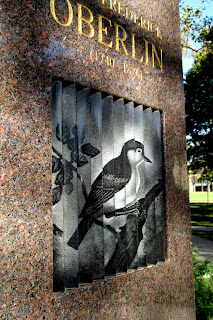 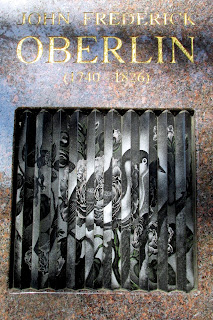 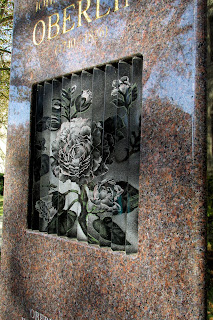 It is a concept that seems ingrained in Oberlin the college and in the town. Although we didn't visit any of these spots on our outing, the town played a key role in abolitionism during the Civil War and was an Underground Railroad site. Today the university carries a progressive reputation and one active in civil, environmental and human rights issues. 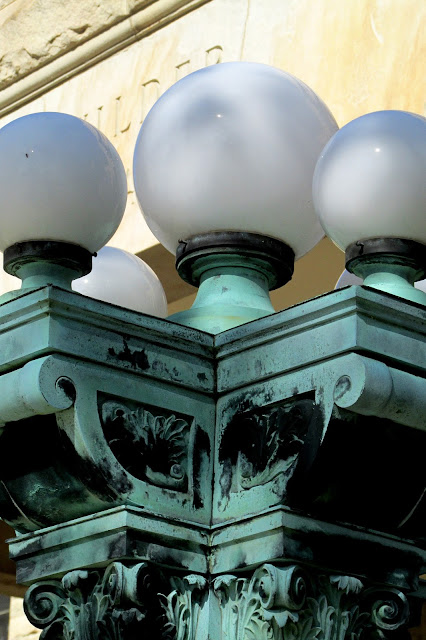 The campus is primarily composed of traditional architecture. 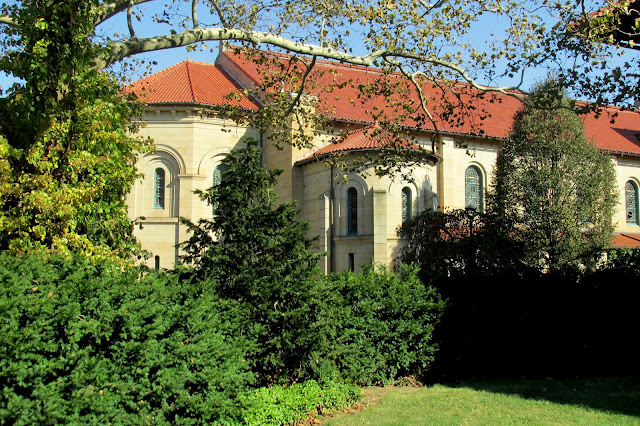 However, the music conservatory definitely had a modern twist -- and a very nice concert hall! 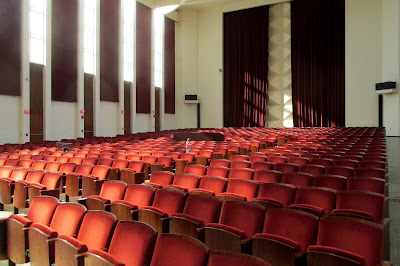 And of course, on a lovely day like this, ivy covered halls and changing leaves made for great eye candy! This pretty impressive group of Oberlin alumni probably enjoyed this campus as much as the education! 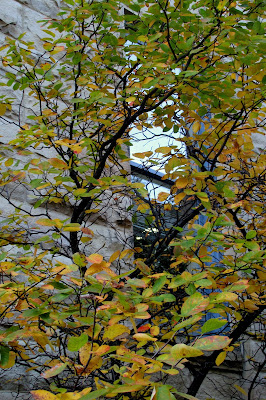 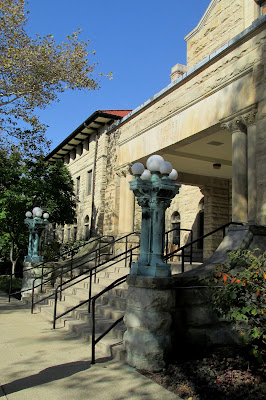 Then it was back on the road, headed toward home. 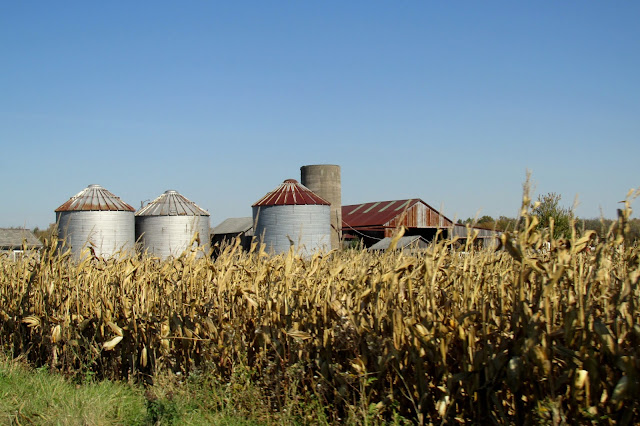 A good holiday, fun to see family, discover new places and enjoy the beautiful fall weather. But it's good to be home!
Posted by Jeanie at 10:31 AM

I love the charm of smaller schools, great photos capturing that! :)

I'm surprised that you still have so many leaves on your trees. That campus is beautiful. Glad you had such a nice day.

I think Ohio must have smart tax rules that favor small colleges and universities. They have so many!

I admire the forward thinking of people who made a good environment for higher education -- what a great "industry" to favor. So many people benefit, in so many ways.

Thanks for sharing your visit with us. :-)

Hi Jeanie! Oh, this was a cute place and how nice your hubby brought you back to explore it! Thanks for popping in to see me and I hope you have a great weekend.
Be a sweetie,
Shelia :)

Sigh...I applied to go to college at Oberlin and didn't get in (it's OK, I'm almost over the rejection); I wasn't artistic or progressive enough.

How fun to see the Oberlin campus. I have heard so much about it and just knew it had to be progressive from all I have heard and the type of student that has been attracted to it from Portland, Oregon. Thanks for the tour.

What a lovely place. Must be a wonderful place to do your studies!

Hi Jeanie! Lovely again, to see your tour of the beautiful USA! Happy trails my friend!

There was someone from my high school who got into Oberlin. I don't remember now who it was -- or even if she was in my class, or a year ahead. Anyway, Oberlin was one of a number of colleges that appealed, back in the day. Liberal arts education still was considered valuable, and small colleges were favored. Another that was popular was Cottey College, and all-women's school in Missouri. It's still there, and still all-women. Given some of the craziness in other schools, I'm not sure I wouldn't choose Cottey myself, today!

It does look like a charming campus and you caught it at such a colorful time too!
oxo

Serendipity!
My step-grandson is a student at Oberlin!!
I’ve never seen the town or college so your pictures gave me a splendid introduction to both. I know Sam is happy there, not surprising really.

There is something so comforting about a small college campus....a place of safety and curiosity. I loved those days.
It's sweet, the feeling of other folks loving those days, too:)
Thanks for sharing the nostalgia, and big grace to you
in all of your travels,
Jennifer

Actually lovely that you got to have the campus to yourselves for your photography tour! I like all those stately trees on the park-like campus. You're enjoying a wonderful fall, Jeanie!

It's wonderful to see what Oberlin looks like! Beautiful!

I had been thinking about that school recently for two reasons: it plays a bit part in the Tony-award winning musical FUN HOME when Alison begins to find herself while a student there. It also came up in a conversation with Bob when he was reading a description of some political stance as "wild-eyed, hair-on-fire-Oberlin-dorm-room progressiveness." And he asked if I knew anything about Oberlin. I said I had the general impression that it was quite progressive. But I didn't have the background on it until now. Thanks for the bit of history that puts these other things in context!

What a beautiful campus and such a fun adventure!!

Yes, the next time I visit my cousin in OH I must go see Oberlin. Have heard so many good things about it. Thanks for a beautiful post.

Sounds like a great place to get to go to college. Shame there weren't any students playing music for you to enjoy during your visit.

I think the number of breaks some schools have is ridiculous too. Over here there are breaks every six weeks, and that's without counting bank holidays, teachers' training days, and days when the school gets closed for other reasons (such as really bad weather).

What a charming little town! I love college towns so much. I feel such a sense of wonder and possibility when I walk through a campus. Oberlin looked like such a charming campus and how cool that it is so progressive and has ties to things such as the Underground Railroad.

Phil and I had some time to kill today before heading back to the philly airport so we went to Princeton and walked around. The campus there is amazing!!