A Quick Trip to Cleveland

I've been on the road way more than usual this fall. The last trip took me for a few days to Cleveland to visit my cousins. 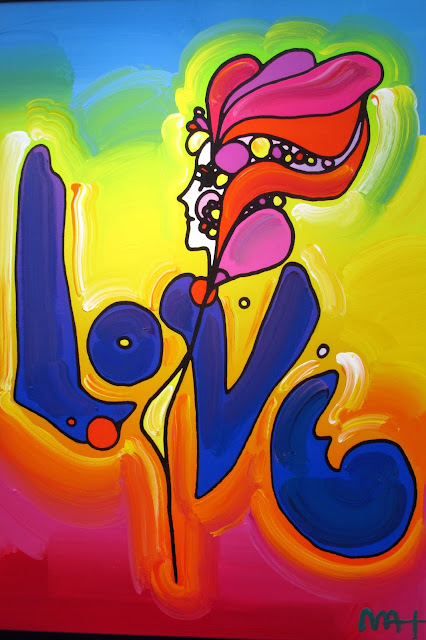 After getting lost a few times and then enjoying lunch with a cousin on the West Side, I landed on Cleveland's East Side. Once again, the leaves were in full gear. The view from my cousin's living room was mesmerizing. 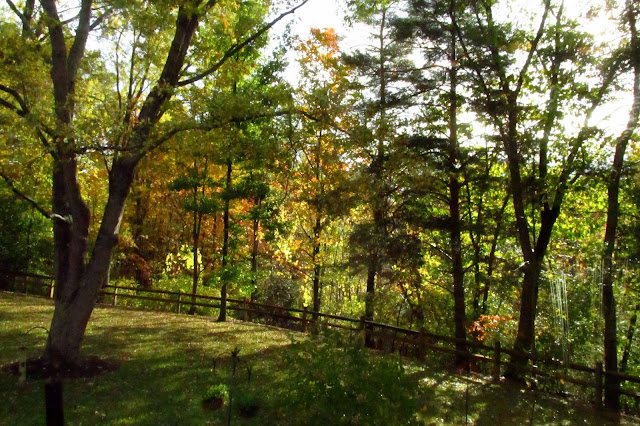 It was even kind of pretty when it was doing this snow-sleet thing that had us all alarmed. As I was sitting comfortably in Cleveland, Rick was riding his bicycle down (fortunately not camping) and we were all pretty concerned! 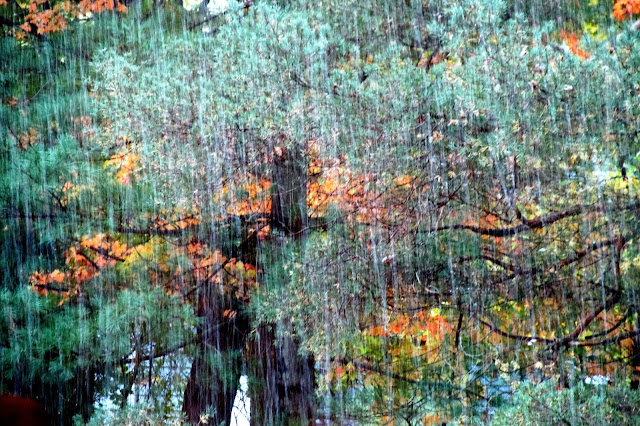 Our dinner out took us to Jekyl's -- a full family outing. The food was good. The view of Chagrin Falls was even better! 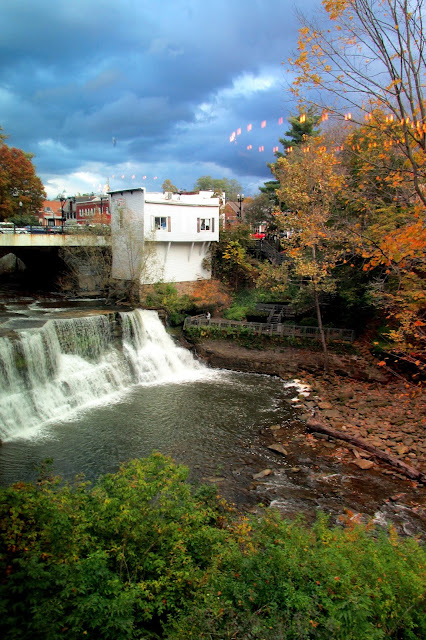 I love visiting family and my friend, Jane, in Cleveland. There is so much to do that we never get it all done! This time, part of the trip was a celebration of my cousin David's birthday. 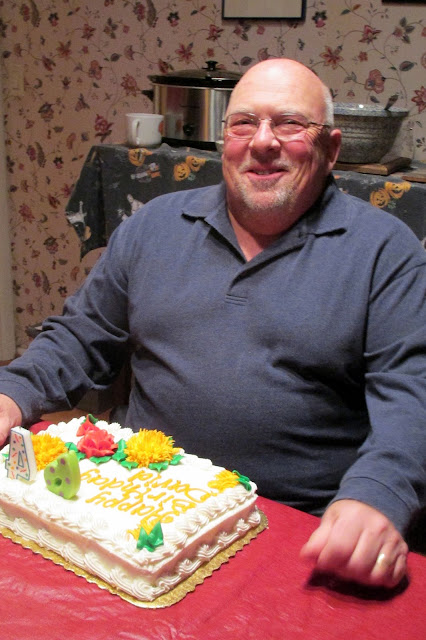 David and I are like brother and sister -- we're two months apart and have a lifetime of experiences together so it was fun to be there for the party! 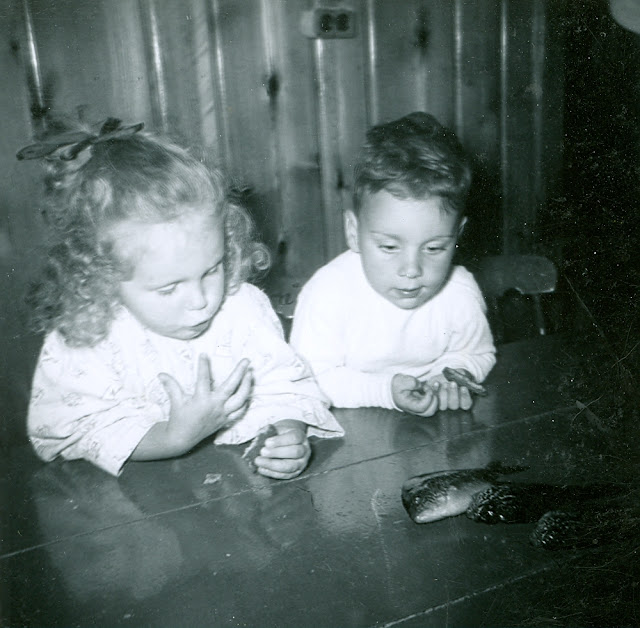 I met Jane years ago at a contradance when we were both sitting out. It turned out she grew up (and her parents still lived) at the house across the street from where David and Bonnie now live! So a Cleveland trip has to include a visit. This time it was Gigi's, a small bistro-type restaurant in Cleveland Heights. It was too nippy to eat outside but the bruschetta plate made being inside well worthwhile! 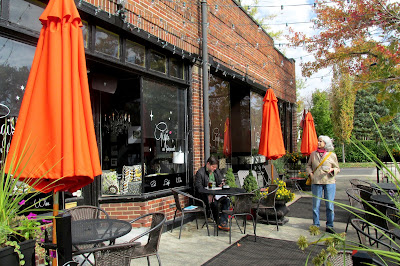 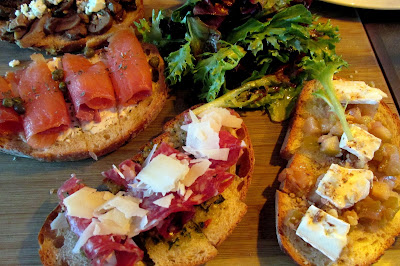 After a birthday breakfast at Jack's deli (we like to spread birthdays out in our family!) David and I drove around a bit and the color in this tree-filled area didn't disappoint! 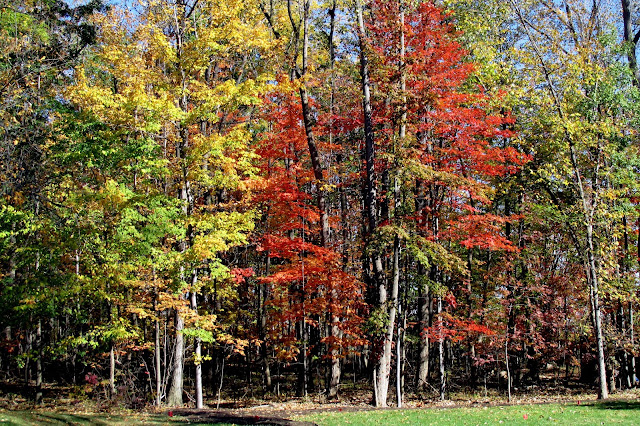 When I was in Beachwood, David's suburb, I noticed a lot of yarn-bombed trees. They were done to celebrate the Peter Max exhibit at the community center. 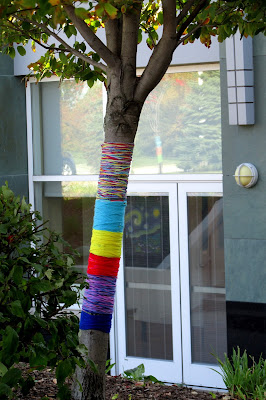 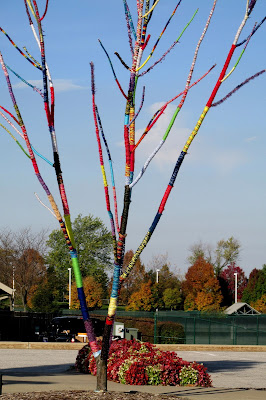 Although we missed the artist's appearance by a week, Rick and I enjoyed checking out the colorful paintings -- a blast from the 70s past! 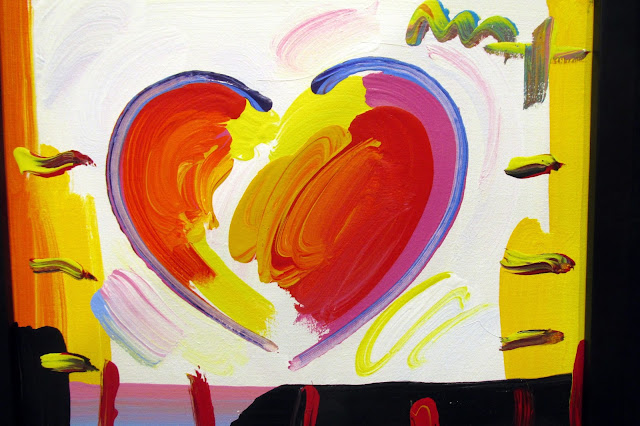 It was hard for me to pick a favorite. There were a few iconic images along with new ones I'd never seen. 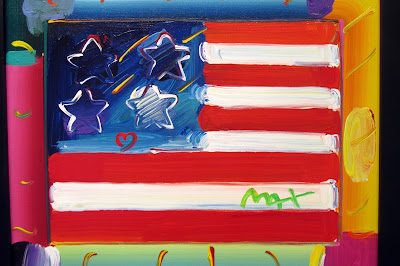 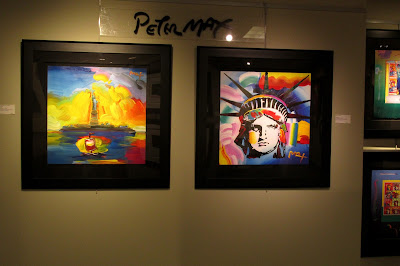 They weren't inexpensive, either -- between $6,000 and $40,000 for the ones I saw. I think this Sinatra (from Nancy Sinatra's collection) was the most expensive. 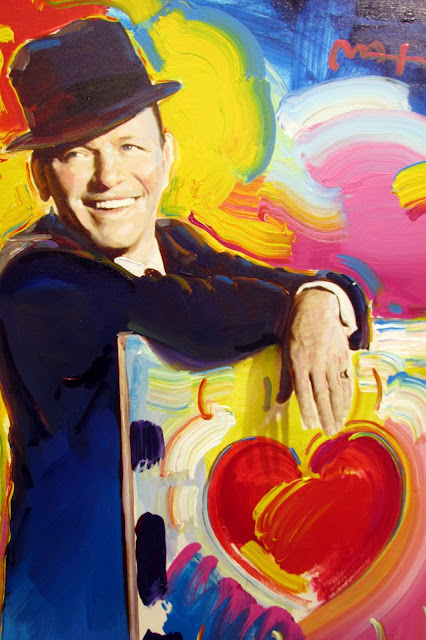 Truth be told, I loved these paintings. But Peter Max is clearly an artist derivative of himself. There were multiples of most of these paintings -- sometimes with a different color, in a different size, a different swatch of red instead of blue. I understand this. I paint the same backwards-sitting cat all the time, changing it up. But that's because I have a limited drawing and painting ability. I expect more from him. 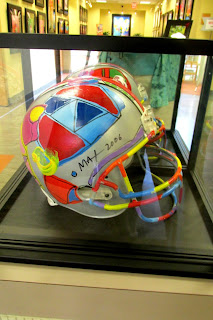 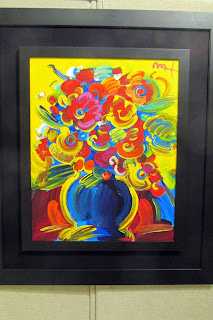 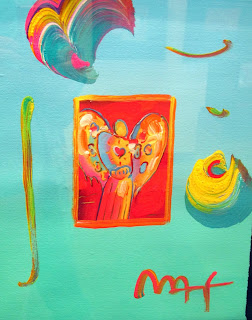 That said, I loved every single thing I saw, even the duplicates! 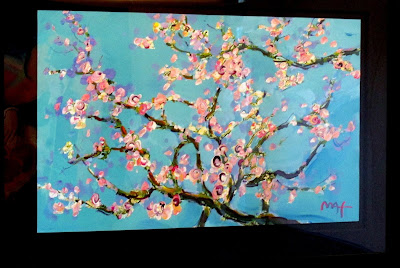 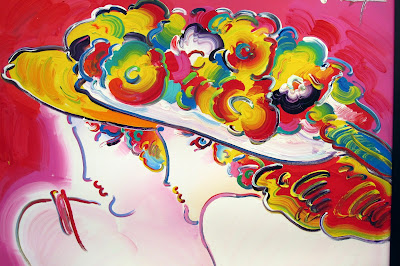 This angel was my favorite. What's yours? 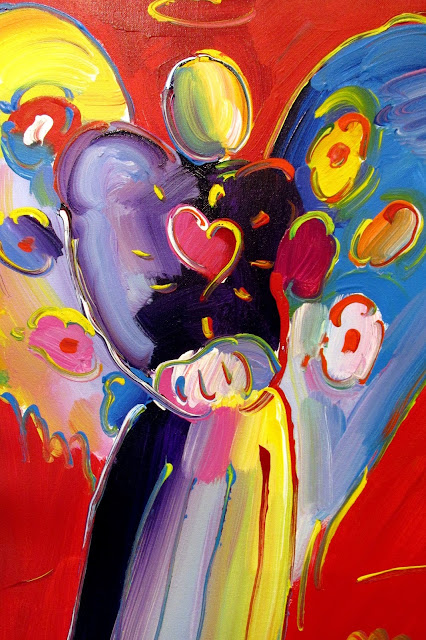 We were off to home. A short visit for Rick and not long enough for me. We made a short side trip to the small college town of Oberlin. We'll go there next time!
Posted by Jeanie at 8:44 AM

My uncle and aunt live in Twinsburg, Ohio. I have never been there and probably never will.

Love your photos, though.

What a great visit, Jeanie! Your travel posts always give me the delicious feeling that I've tagged along to see the sights, including the lovely bistros. I was especially interested to see Chagrin Falls. My one surviving college roommate (who has lived and worked in Atlanta for four decades now) is from that area and used to talk about Chagrin Falls. Now, thanks to you, I've seen the falls! How great that you could celebrate with your cousin David. I think as we age, our cousins become even more dear to us once again.

Wonderful wander around with you, my friend. I wonder what Peter Max would have done with Autumn leaves?

I like the idea of variations on a theme kind of painting set (what if I made that blue? What if I made the wings lighter? what if the broken heart was less jagged?); but I tend to work in multiples. I like the Cleveland area.As usual, great photos.

You have such a full and colorful like, Janie. You always have something to do and something to blog about. It looks like a wonderful time was had. The food pic makes me hungry.

You have been busy lately! This sounds like such a fun getaway though. How wonderful to help your cousin celebrate his birthday! The yarn covered trees are so cool! It's tough to pick a favorite painting but if it had to choose I would say the cherry blossom one!

Wow! Loved the splashes of color and designs in the paintings. I guess I won't be buying one soon though. They are a bit rich for my blood. What fun it must have been to see them.

It is great to read of the time you spent with your cousin. How neat that two are so close in age. Cousins are the best. How cool that he lives right across the street from your friend.

I do have to say that the photo of rain/sleet/snow is especially nice. You nailed in taking this photo. I can only imagine how worried you were about Rick out in this type of weather.

Your post brought back many memories as I grew up in Cleveland, then to Euclid and then out to Jefferson, Ohio on a farm. The trees are always so beautiful. Cleveland has really changed.
So glad that you had a wonderful time. But, I didn't like the winters...... way to cold.
Mary

Janie,
These paintings are like a symbol of your beautiful, colorful, full and interesting life!
I am not familiar with the area you write of, although it is certainly beautiful. My childhood memories are of the mountains, camping, picnicking and then many, many years visiting family in Morehead City North Carolina and swimming with abandon in the ocean!
Enjoyed this post!
xo
Jemma

Yes, you are traveling a lot this fall and good for you! It's such a special time to enjoy the beautiful of mother nature. Cleveland gave you a little taste of what's sure to come with the sleet. Glad it didn't turn into a full blown storm while you visiting. It is nice you are where you can drive to visit family. Nice exhibit to see, I do love all the color. I know you miss Rick, hope he'll be home soon………..

So glad you had a great time...the colors are just beautiful. We don't have many trees here and they don't change into beautiful colors....:(

Dear Jeanie,
First, thank you so much for visiting.. I am so happy you enjoyed Fred and Ethel..
What a great time you had... The photos and art are wonderful! I think my favorite would be Sinatra.
Wishing you a beautiful week.
fondly,
Penny

Hello sweet Jeanie! Our country is so pretty, isn't it? I love the east and upper midwest as well as the mid-atlantic. Enjoy your travels my friend!

I looked and sounded like a terrific quick trip. Celebrations, fall colors, and Peter Max art all would make it so special. I like that angel too. So many of my daughter's friends went to Oberlin to college. The school does have a good reputation.

Lovely again. My fave is the third pic, just like a Monet. Also, tried your 'Translate' button and turn the whole thing into Chinese (Traditional) and had quite a good laugh. (Not your fault.)

Wonderful photos in Cleveland! I love all the paintings. These are wonderful work of art!

What a bright and colourful post, Jeanie. I love the yarnbombed trees. ( I like the word too - not one I have come across before. ) The woods are absolutely fabulous. How lovely to have someone you've kind of grown up with, who is almost the same age. What a lot of memories you must share!

It looks like a wonderful trip. I like the painting of Sinatra, and the yarn-bombing, too. I have several artists I enjoy who tend to paint the same theme and variations. I'm not sure they're being derivative of themselves -- they just enjoy creating in certain ways. Have you ever seen George Rodrigue's Blue Dog? George isn't with us any more, but the Blue Dog lives on!

What fun, Jeanie...you have the most FUN! Your cousin David has such a great smile... Great you were there for his birthday! LOVE the yarn-art'ed trees! The color-rich art is so much fun! I really like that angel canvas too! :o) More autumn beauty too... *swoon*... Happy Days ((HUGS))

What a happy, colourful post in more ways than one! Starting with the cake and birthday boy, why do I start with the food?! The spectacular Fall leaves and decorated trees and the paintings, I love the love heart awww! Looks a fabulous trip Jeannie :)
Wren x

What a fun and colorful visit thanks to Mother Nature and all of that lovely artwork.
I always get excited when I see yarn bombing.
Sweet picture of you and your cousin and how special that you could celebrate his birthday with him again this year.
The snow/sleet photo you took looks like it was altered in photoshop = very cool capture.
oxo

There's a Peter Max gallery in Cherry Creek, Denver where we used to have a house. i wonder who buys these paintings? I've been in the gallery but usually when I'd walk by there was nobody inside. They are colorful, but 40,000 is a lot of money! I like the yarn-bombed trees. They're original!