Well, now that September is here, I feel somewhat compelled to get back on track -- whatever that means! I've been spending time at the lake, trying to wring the last bits of glorious summer out of the sky and I was wringing so hard it started to shed tears! Two days of dark skies and rain!

No power loss this time, but it was pretty dramatic. I felt especially bad because Rick was on his bike ride at the time and camping along with it. 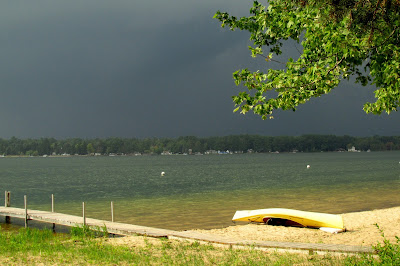 Since blogging wasn't much of an option (I think I'm finally pretty well caught up!), I found myself digging into books (the new Maisie Dobbs, "The Girl on the Train," a Ruth Rendell that was more than creepy, Martin Fletcher's "The List" and Marie Kondo's tidying tirade. I may have to do a post on that one but as my northern neighbor noted, I get too agitated when I talk about it! So, I need to calm down.) 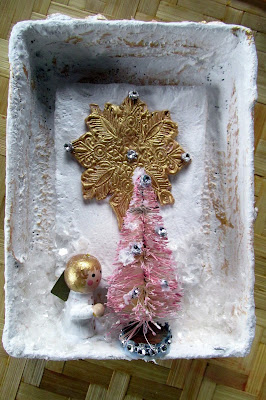 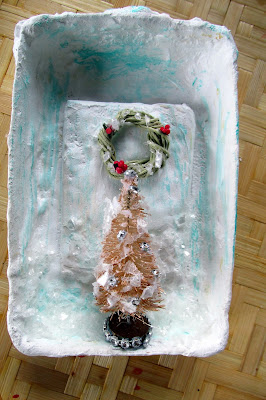 I also got a few art bits done. Some new Christmas boxes for our November sale... 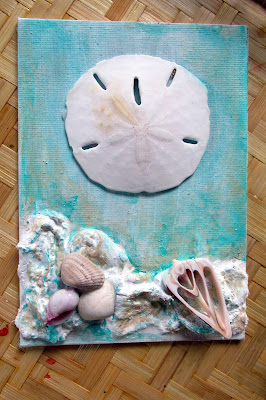 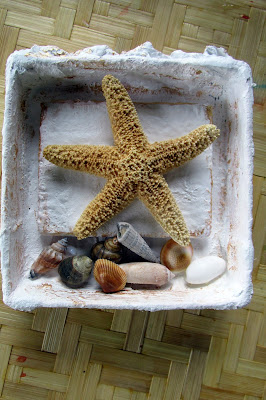 ...and some pieces using bits of the sea. 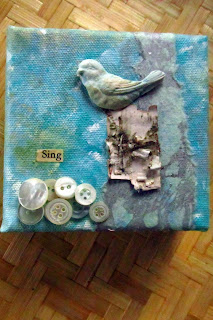 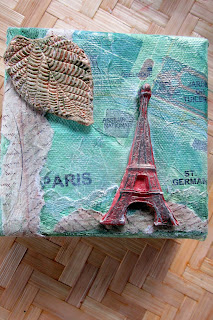 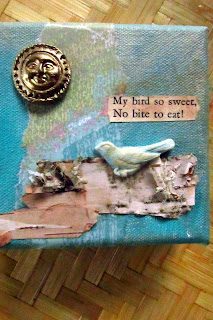 I finished up three mini-canvases and one I won't even show because I hate it so much! 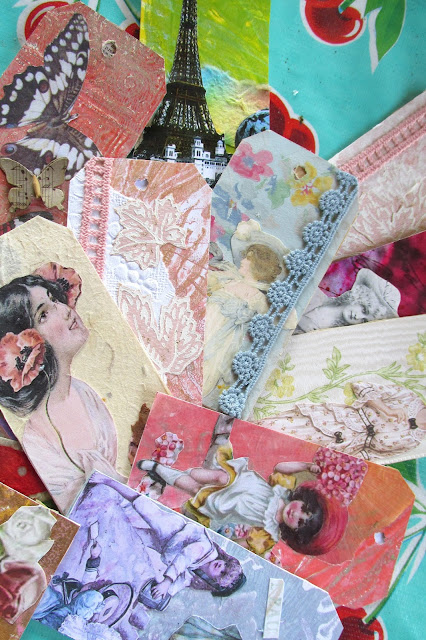 A slew of tags are finished except for adding their ribbons, which were at home. 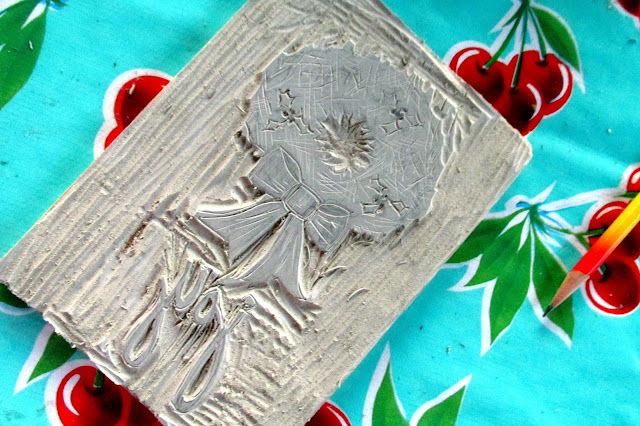 And, I carved my next linoleum block in anticipation of the winter holidays! 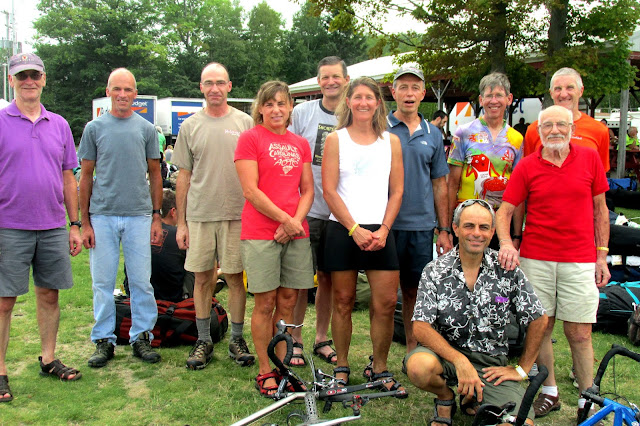 Much of this time I was by myself but on the Sunday before Labor Day I did go to Mackinaw City to pick up Rick from his four-day, 400-mile bike ride.They don't look too bad after 400 miles over four days, do they?  It was good to see him and his gang, all in one piece! 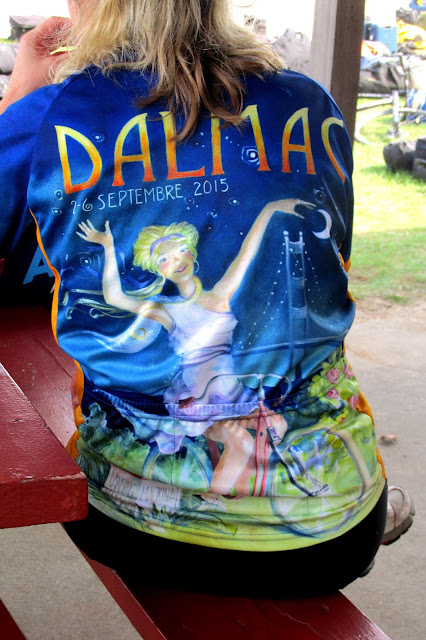 And what do you think of the ride's jersey this year? It was designed by my friend and gouache guru, Barbara Hranilovich. I wish Rick had bought one! 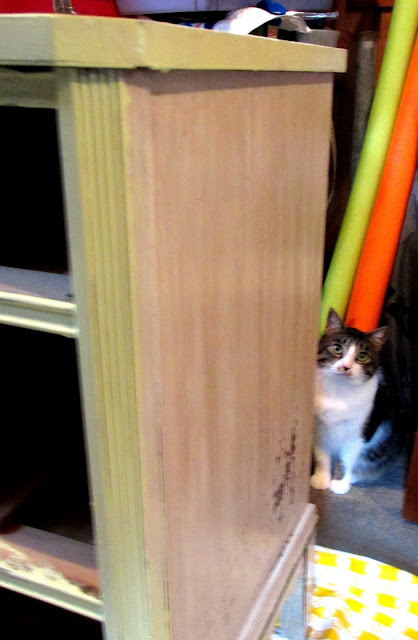 Of course, there were some decorating projects -- chalk painting this desk, to be specific. Everyone needs an assistant. I wouldn't recommend this one. My friend Claudia calls her the "Snoopervisor." I think I have all the paint out of her hair, though she hated it when it was digging it out of her ear flaps! There was a bit more art-type painting while I was away, too. I did this postcard of the cottage to add to some I was sending out. Rick says it isn't quite right and he's correct -- but it's close. 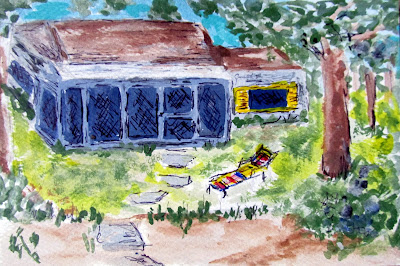 Trips to the lake won't end this week of course! September and October are beautiful months there. But life picks up down here, too, so the stays will probably be a little shorter. And while I'll love the color season, it brings with it colder days and nights! 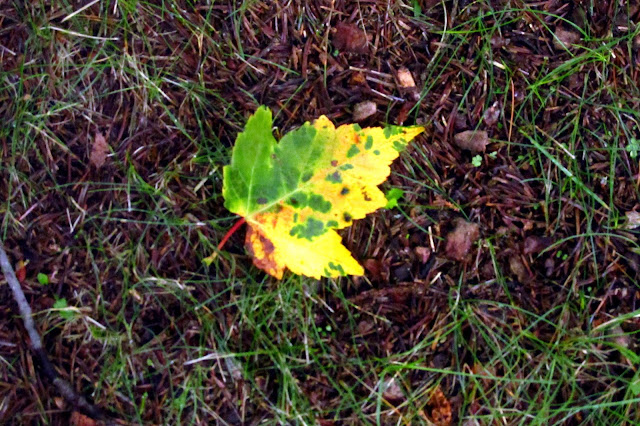 But now that I'm home, it's more Goodwill hunting (I cleaned the sock cupboard yesterday, so Marie motivated something; onto the closet floor next!), catching some movies ("Clouds of Sils Maria" and "Testament of Youth" are finally coming!).and cutting back the garden. Theatre board meetings have started and I'll finally be in one place long enough to catch up with friends. And really, isn't that the best?
Posted by Jeanie at 10:03 AM

Email ThisBlogThis!Share to TwitterShare to FacebookShare to Pinterest
Labels: musings, my art

It looks like you had a very creative and lovely time by yourself and with the kitty.

maybe you will show us how the stamp looks with ink?
such dramatic photos, not boring weather!

Sometimes I like the feeling before the rain. I also like how dramatically the sky changes its color. But I wouldn't like to be caught up in the rain when on a bike ride like Rick. The shirt's design by the way is pretty.

The sky certainly looks dark in that first photo! I am glad you did not lose power, but poor Rick! It would be terrible to bike and then camp when it's rainy/wet outside! I love the bike jersey from that ride he did, though! How fun!

I am glad you are soaking up the last bits of summer and making the most of your time at the lake. I only made it to my parents lake home 3 times which is way less than I usually get there! And I won't get a chance to get up there again until Thanksgiving or Christmas as my fall is filling up. :( But I shouldn't complain as it's mostly filled with fun things!

At the lake, even a stormy day is beautiful! I'm so glad you have that lake house with so many memories -- both distant and recent! It's obviously a creative inspiration. Love those Christmas boxes and the seashell art!

What a whirlwind! You have been so busy, and you have a lot to show for it. Fall has come to the high country - I hiked with friends today, and the leaves were glorious. Now, if only the snow holds off! Can't believe Rick and his gang biked 400 miles in 4 days. Whew! He's younger than I am!

What a life you live! It could be my imagination, but Lizzie looks as though she's thinking, "Mom, can't we just stay in one place for a while?" That could be me, projecting, of course!

That linoleum cut looks like it's going to be great. I'm anxious to see how that turns out. And how I envy you all those colors in the trees -- and presumably cooler temperatures. We're back to summer, and I'm trying very, very hard not to whine. Soon enough, we'll have some decent (i.e., cooler) weather.

Who's Marie Kondo, that she got you so wound up? I'll go explore, and see what she's writing about. :)

Oh. I should have googled Marie Kondo right away. How can I not have heard of this "world-wide celebrity who brings salvation through de-cluttering"? Gracious. No wonder she sets your teeth on edge!

I never thought of comparing myself to a cat, but if I were your helper I would be just as much trouble as Lizzie! I admire anyone who can paint without making a total mess!

Oh Jeanie, thanks for stopping by and leaving such a lovely comment on my Michigan post! I so enjoy seeing and knowing folks in and from Michigan too. What fun you all had here, what a lovely family you have too.

Hello there Jeanie! Welcome back! You had quite the summer at the lake! And your weather looks like ours. We had flash floods in St. Paul, but here we are fine, but this morning was thunder, lightening and downpours! Be safe, have a blast!

Well, it looks like you have been busy. Love your art.

Catching up with friends is the very best. Loved seeing your assistant peaking out from behind you painting project. No the bike riders didn't look so bad for all those miles. Glad they had a good trip. Loved the artwork. I have a feeling that the one you didn't show is good too.

You sure have been busy! What accomplishment! Lovely things for your sale.

I love Marie Kondo, but my room is still messy. Oh well. Maybe I'll take your lead and arrange the sock drawer.

Hi Jeanie, Sure happy to hear you didn't loose power with this storm, it looks very threatening! You sure stayed busy and finished a lot of your art. I love your tags and Christmas boxes. Yes, the bike club jersey is awesome, maybe you could still get one. Busy here, now painting the exterior of the house and after that tackle the beds for fall and winter.
Have a great weekend..............

Oh, but I know what you mean, Jeanie... summer is short here too, and so we just gotta drink up every drop while we can. This week we've been hit with remains of a tropical storm that began in the Caribbean--just sooo much rain and gray skies...*sigh*... so I feel for you! But all the "weather" does make for good creative time! LOVE, love, love your Christmas boxes!! That mini pink tree is calling my name... LOL! Those mini canvases are sooo sweet! Don't you just love a little 3" x 3" canvas?! Your paper goodies are sooo festive... As is your linoleum stamp--beautiful design! That's something I've not done since school days really, carving linoleum... Your take on the cottage is FUN... I think it's quite right, and I've never seen it before--ha! It's always so much fun to catch up with you, Jeanie! :o) ((HUGS))

400 miles!!! Holy cow!!! No wonder Rick stays so slim. That would even knock the pounds off for me.

I like that postcard very much. It has a lot of charm.

I can't believe that fall is upon us. The days are warm but not too warm here and the nights are cool. Perfect weather, in my opinion.

What a beautiful post. Those ominous dark clouds sure looked intimidating. But glad no major harm. I live your seashell collections, particularly umm what do u call it(pardon me I live by the Rockies) a sea dollar? No? That's something I don't see often. Love your painting too. Had a chance to see the films yet? Have a great weekend!

Anyone of your activities would make the heart sing.

It’s great to spend time happily doing things one enjoys, even if there’s no computer handy to interrupt the flow. If you continue your joyous days now that you’re home more you will be one of the happiest bunnies around!

I love the start of this post, with the bit about wringing the sky too hard.

We've had some awesome storms here. I like storms.

Sounds like you've been very busy, but enjoying the things keeping you busy.

Love your mini-canvasses and the cottage postcard looks "just right"!

I love the lilt in your voice
as you write about the simple goodness
of your everyday....it's such a beautiful thing:)
Makes my heart sit up a little straighter
and breathe a little slower and longer.
Thanks for being such a light!
-Jennifer