I'm going to jump ahead to our trip home from New England (and get a little more time to research on the Shaker Village's history). We're at Niagara Falls! 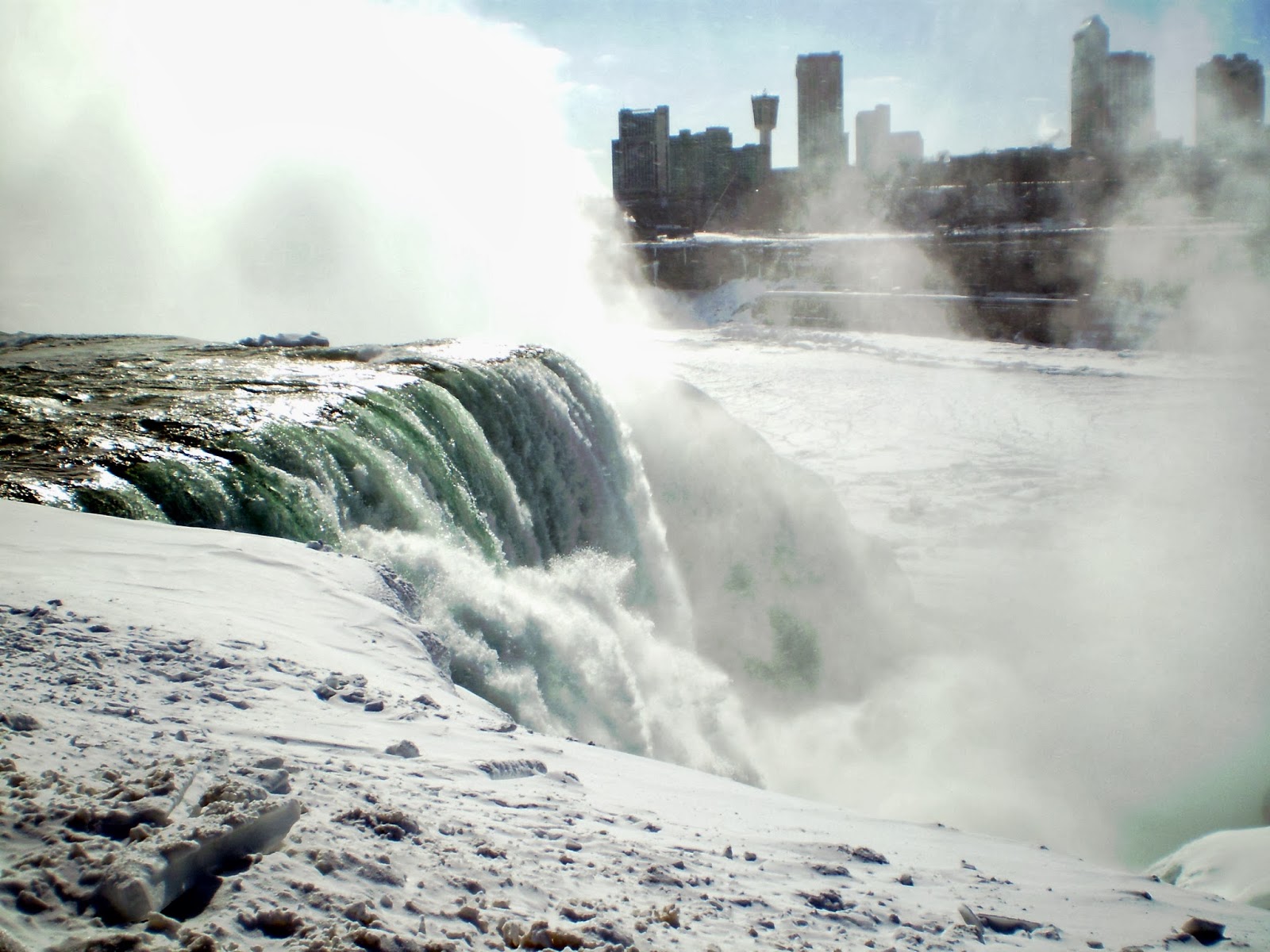 Whenever I think of Niagara Falls, I think of a classic Abbott and Costello routine, in which one prisoner asks another to tell why he is here and he launches into a narrative of how his wife ran off with another to Niagara Falls and every time he hears the words, he goes a bit crazy, saying "Slowly I turned, step by step, inch by inch..." and then he attacks the hapless person who happened to mention the falls, often with seltzer or other slapstick bits.
Lucy did it too -- the version with Phil Silvers is my favorite (but they change "Niagara Falls" to the name "Martha."
Both Rick and I had been there in nice weather at different times, taking the very good tour that goes "behind the scenes." But in winter? Never. 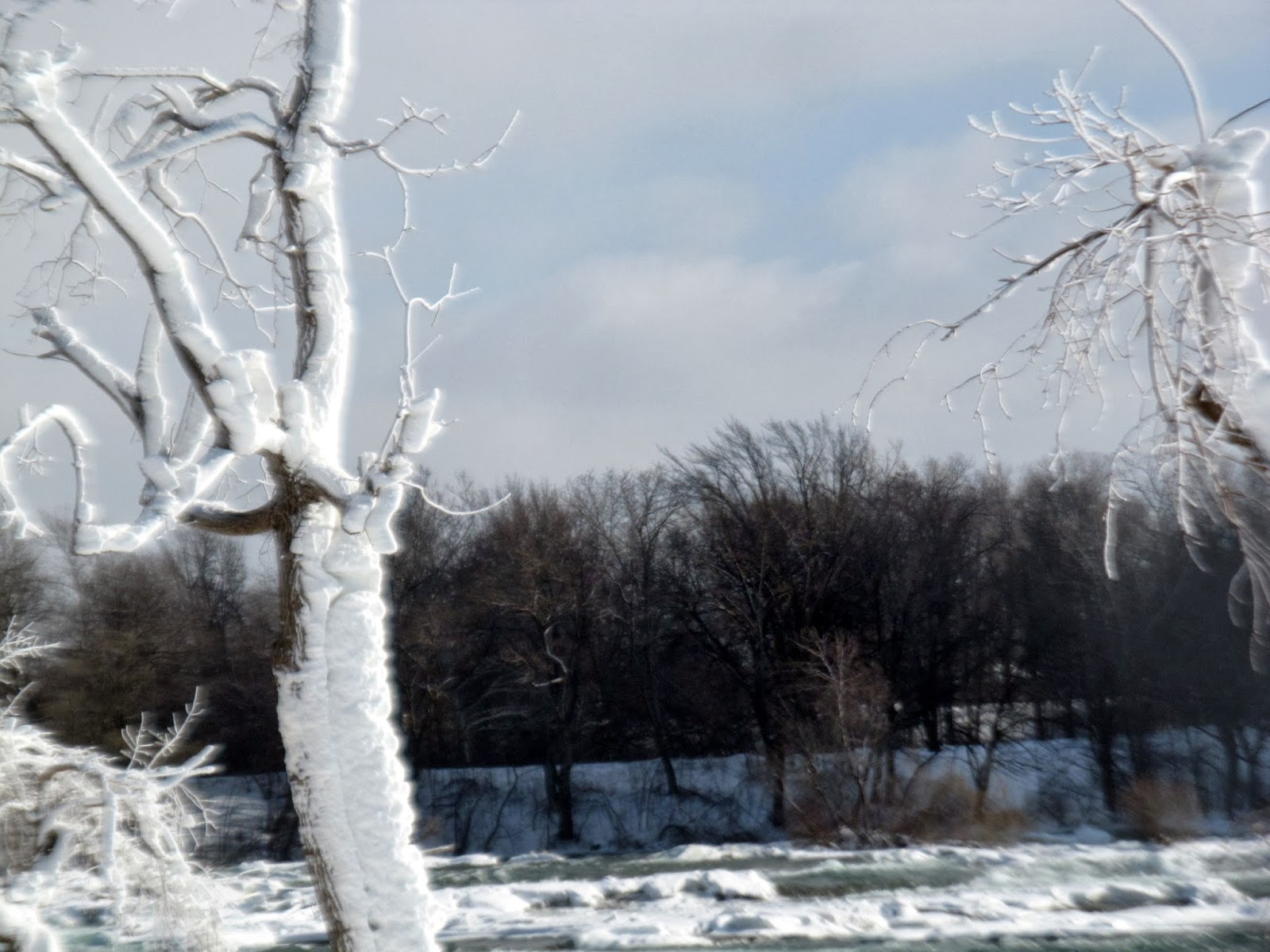 So on our way home we stopped, parked a few blocks away at a souvenir store. (I don't think the owner wanted us to leave. Certainly during this frigid winter, human contact was a rarity in a summery souvenir stand!) Then we walked to the falls. On this cold and windy day, the mist had a powerful effect, stinging our cheeks. I think if we'd stayed another ten minutes, we would have frostbite. 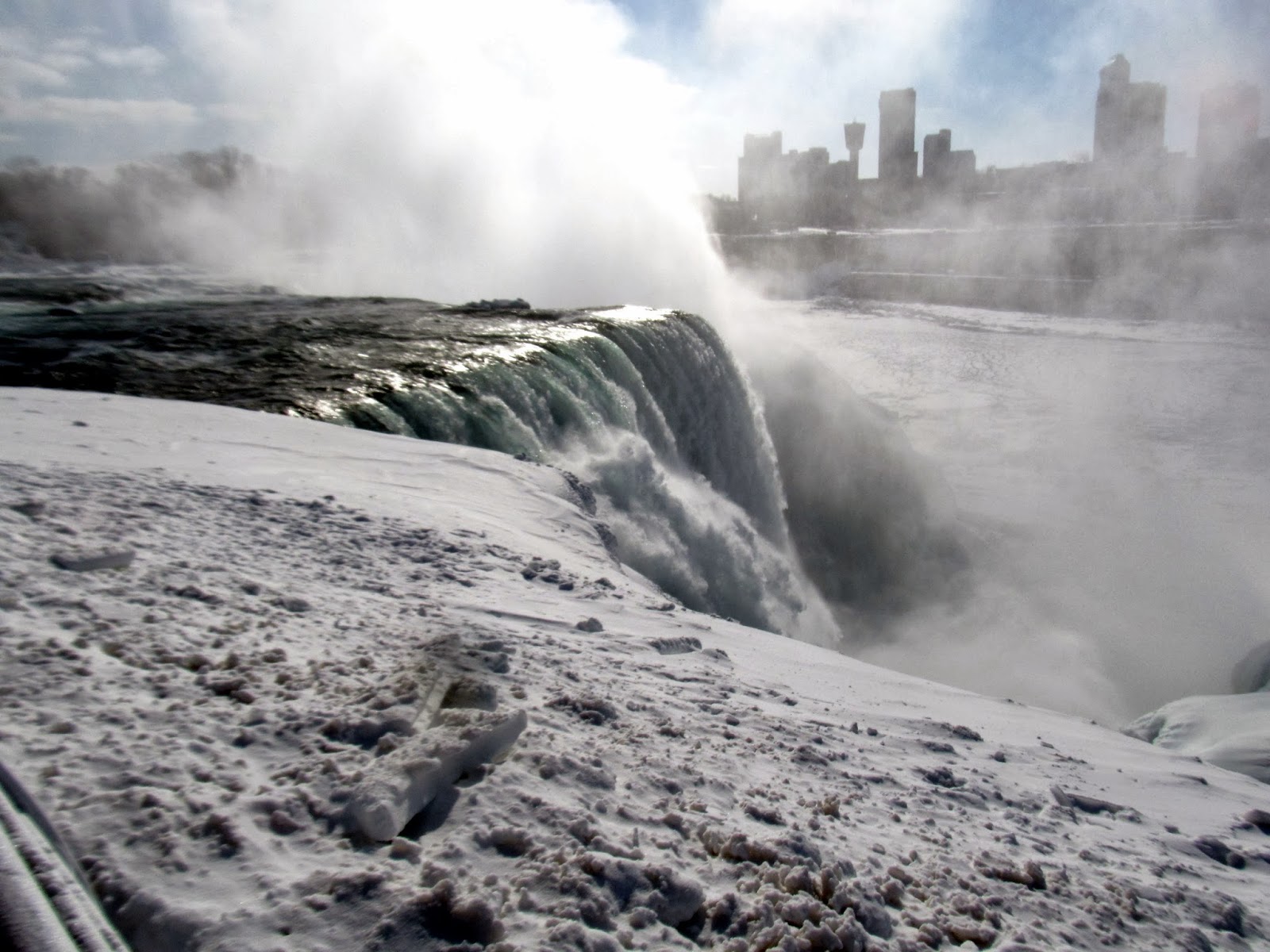 No one can deny it was gorgeous. Snow and ice clung to the sides of the trees with a fairyland effect. 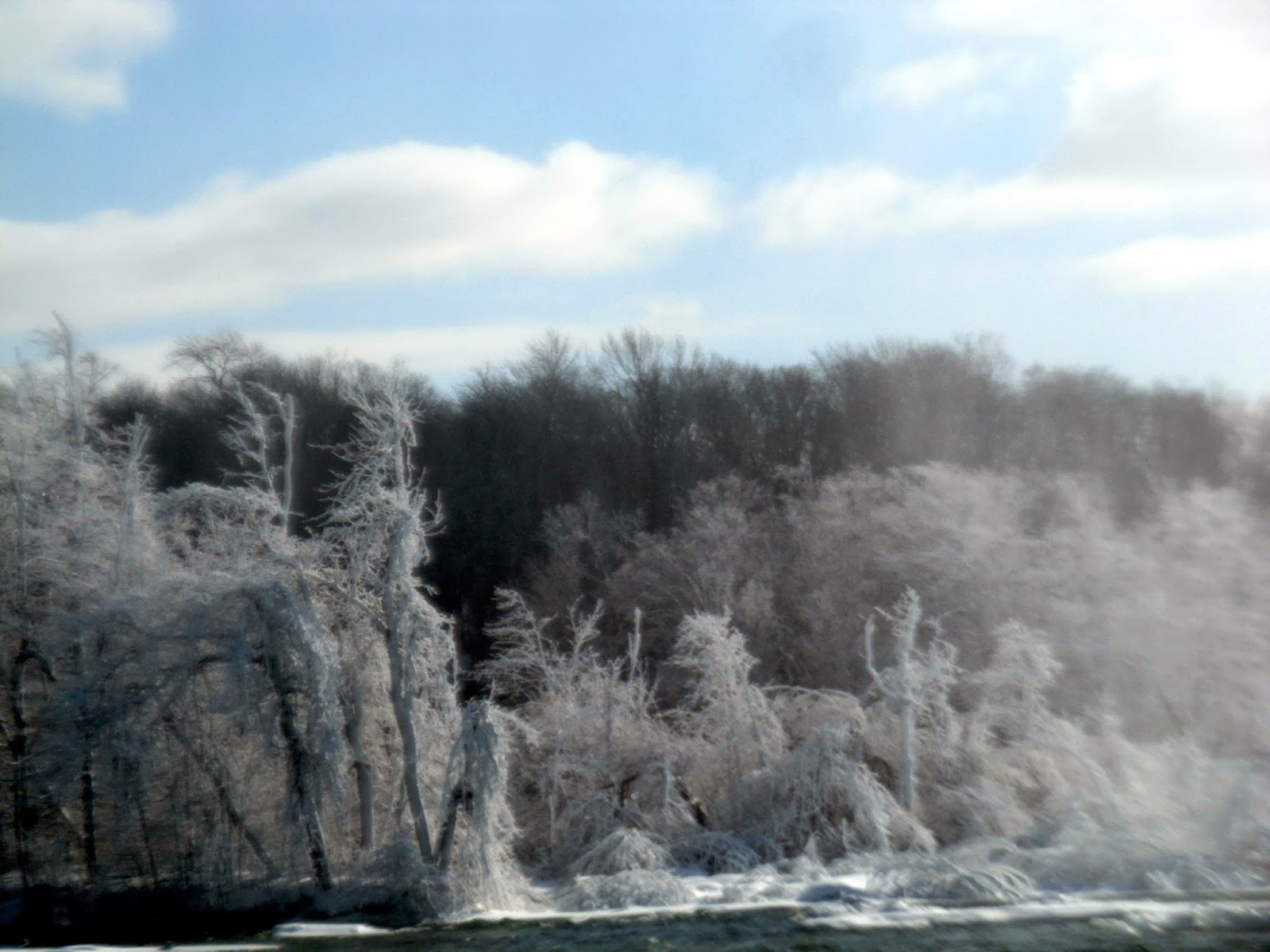 The light was perfect. The graceful arch of the sidewalk made for interesting photo angles. 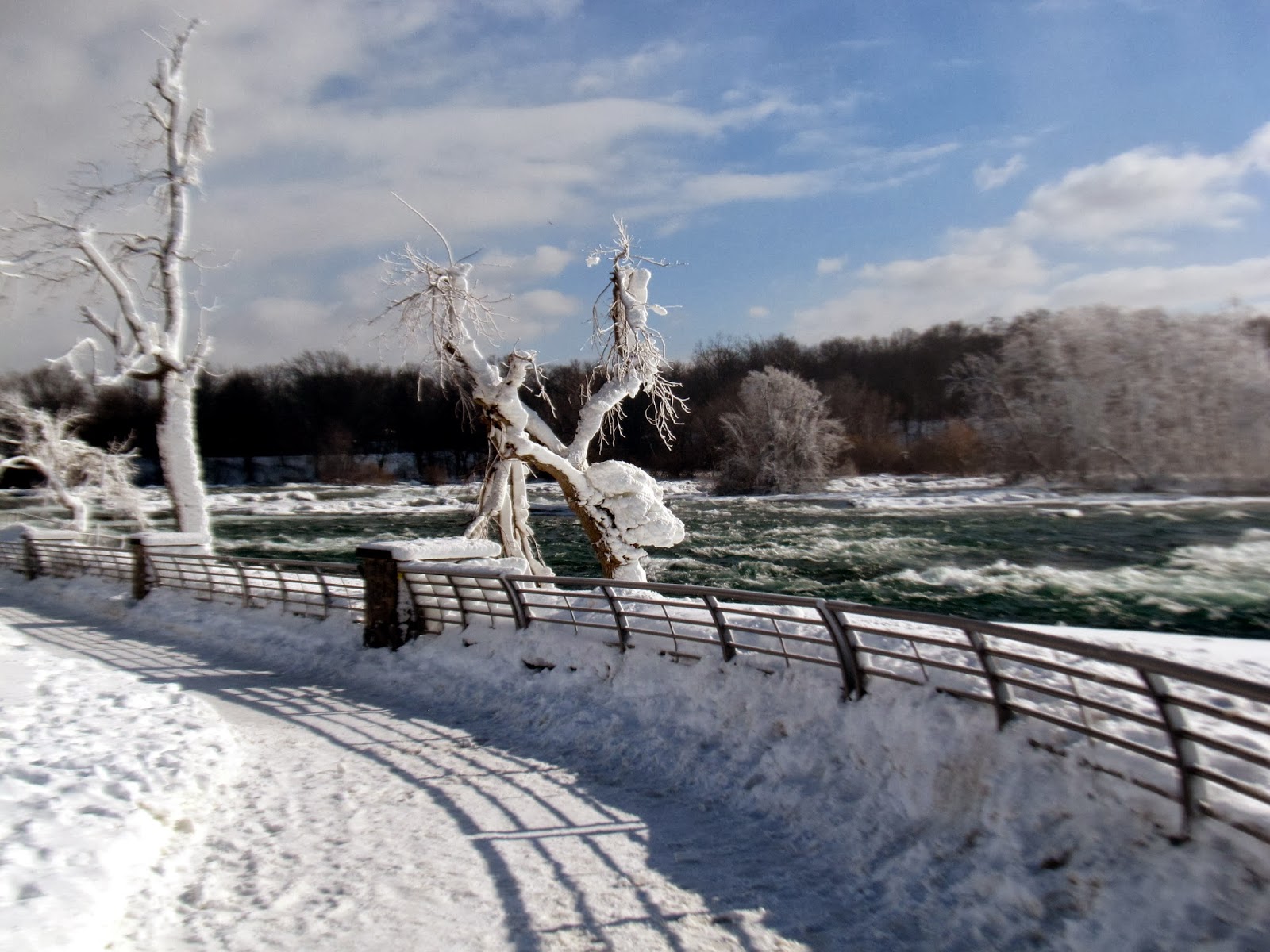 And when you looked behind you saw something rare this winter -- a brilliant blue sky. 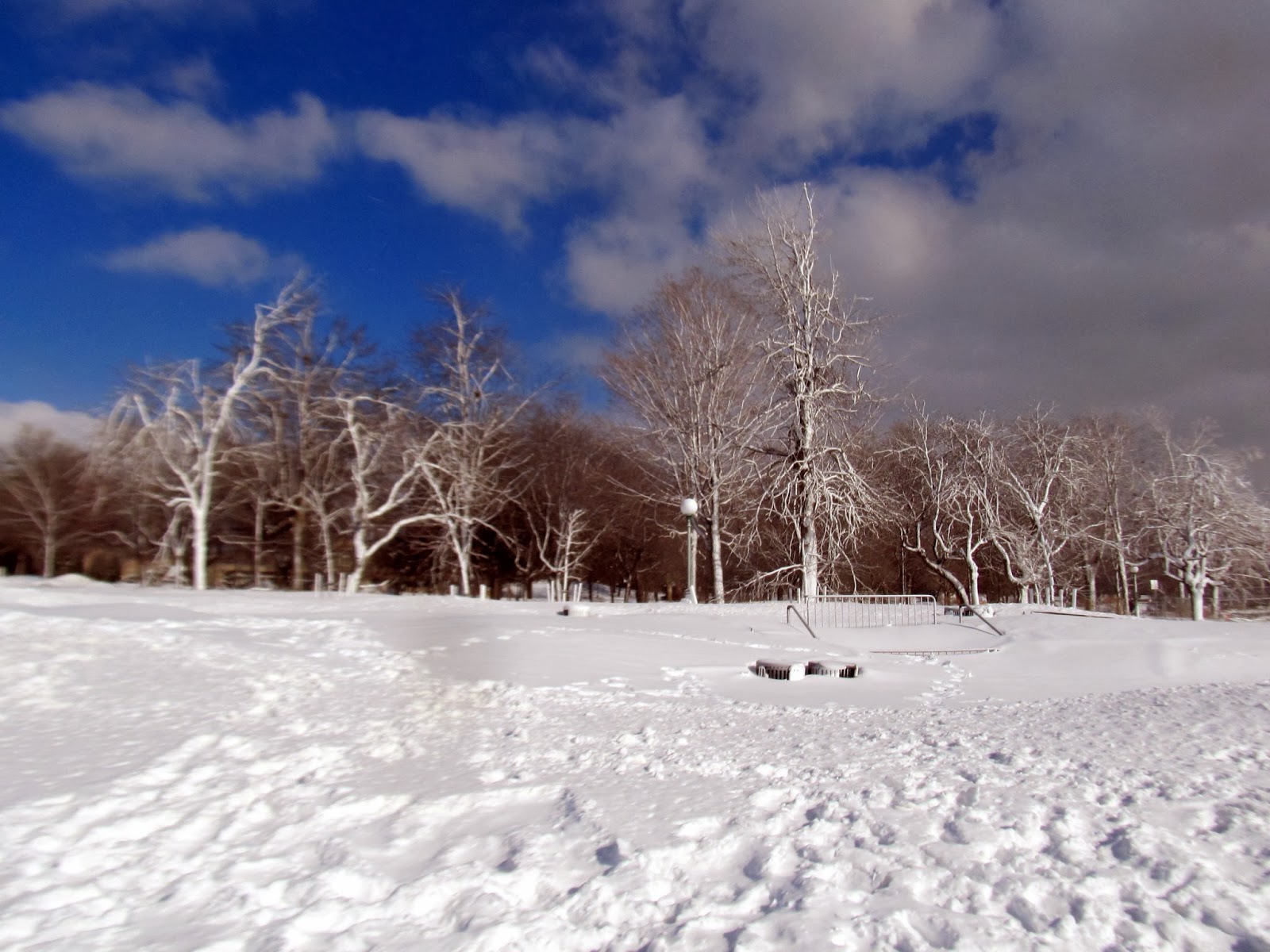 Some of the trees looked downright eerie! 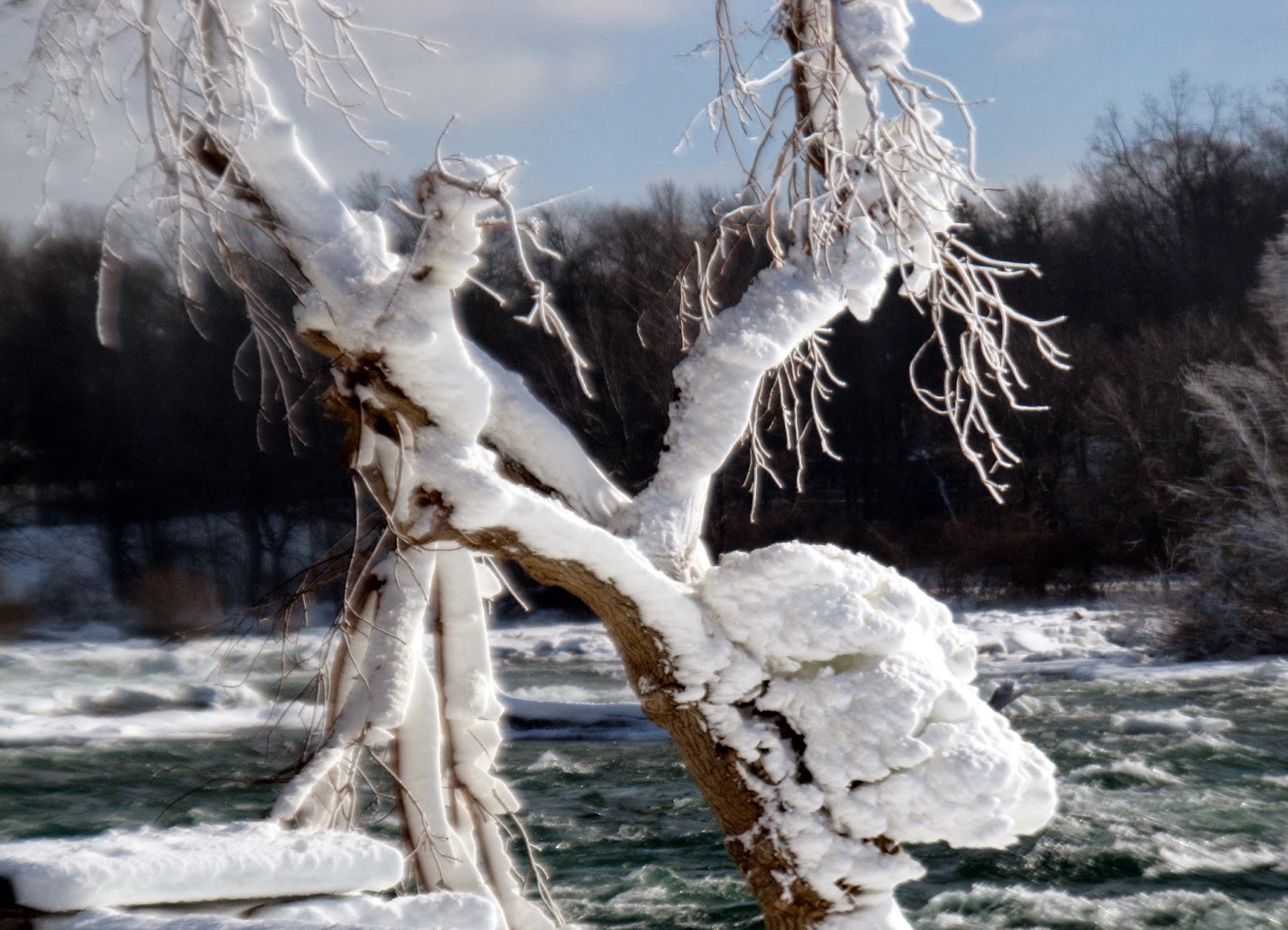 But it was clear that there hadn't been a lot of visitors -- at least, they weren't using the "spy glass" binoculars at the site! 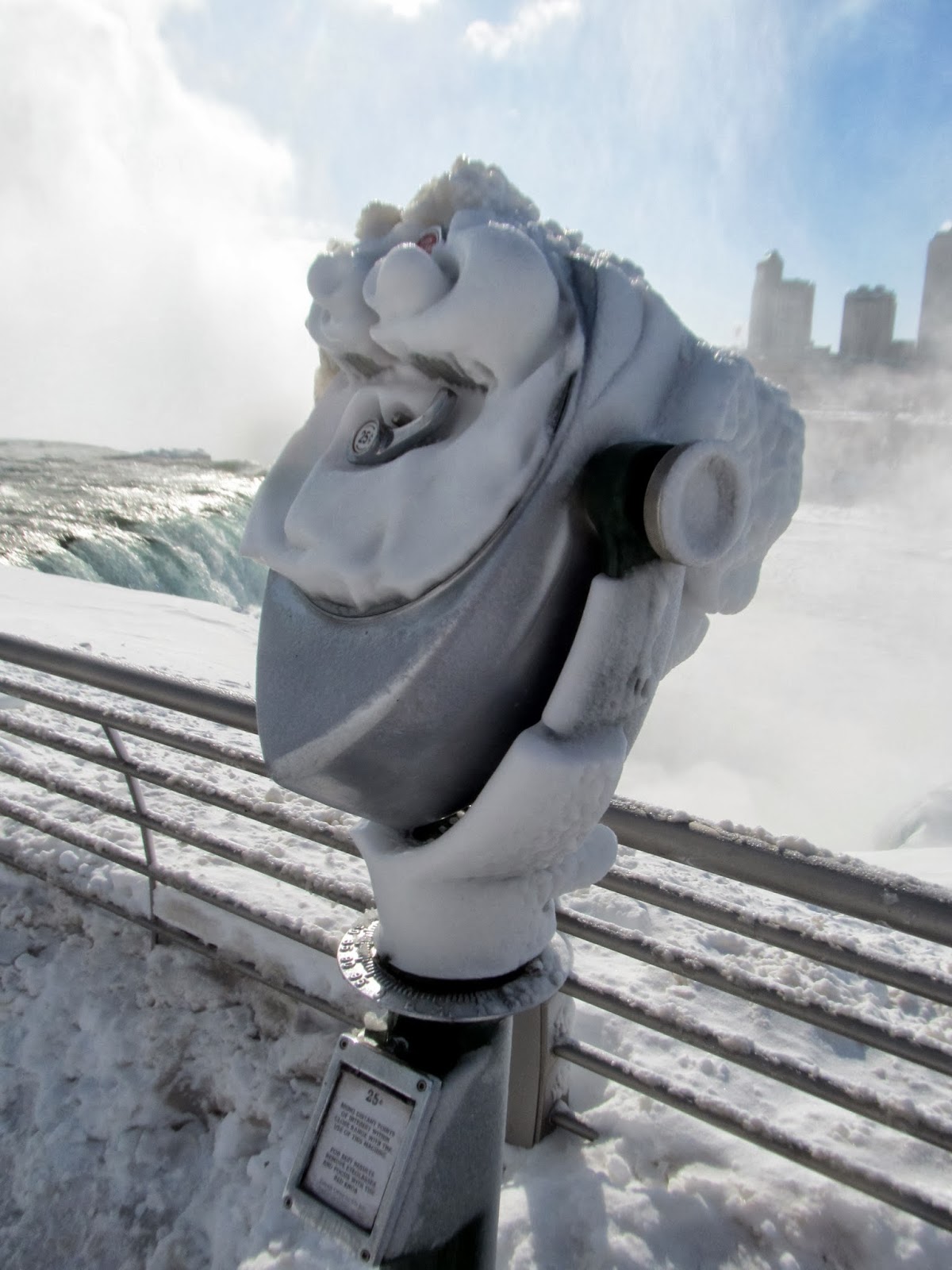 At the base of the falls, there was plenty of ice and snow. 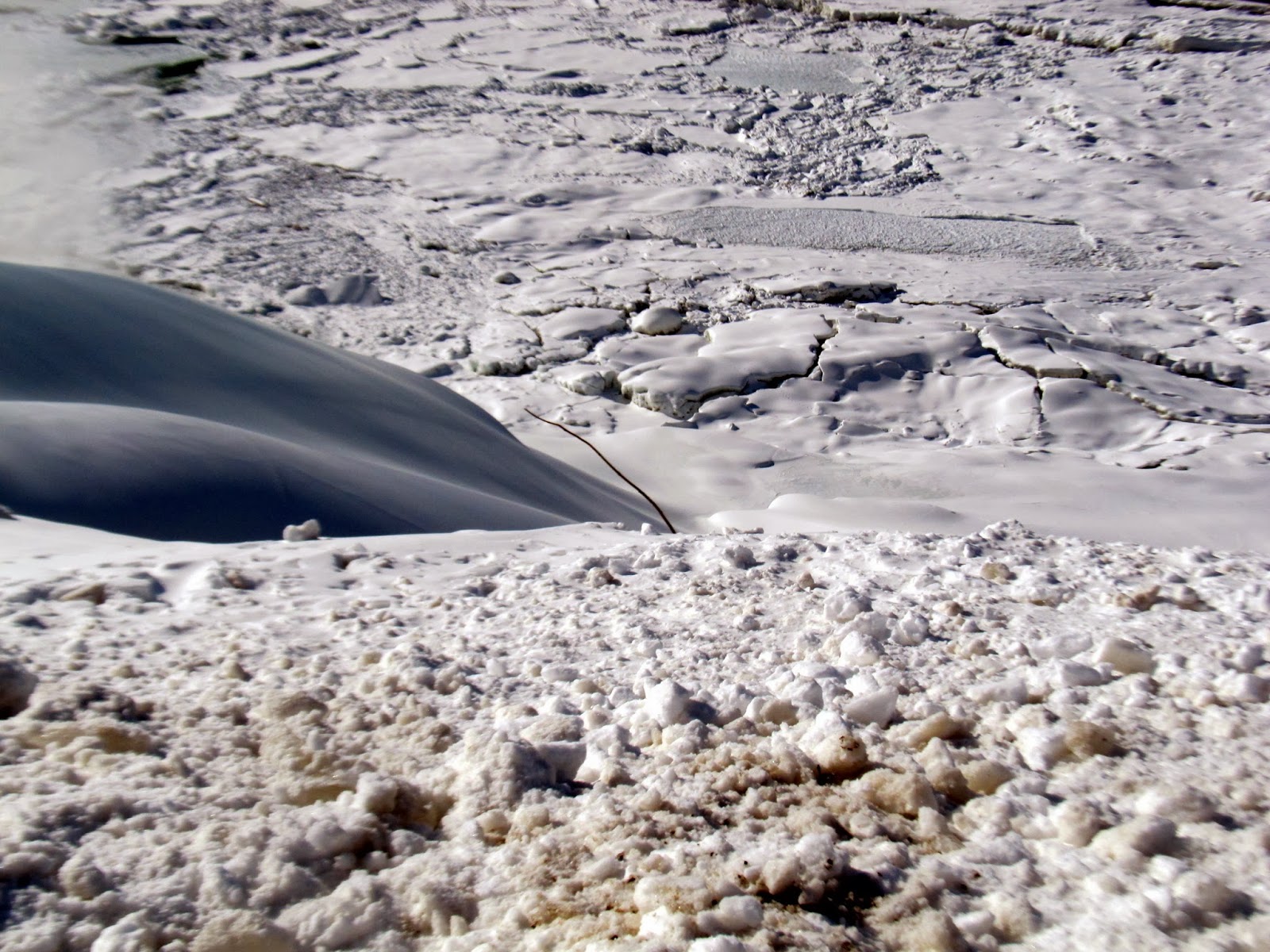 It was no surprise to learn the next day that the falls had frozen over the next night. With the dropping temperatures and wind, it seemed a given. You can see some fabulous photos and read more about it here. Take a look -- the photos at night are especially magnificent. 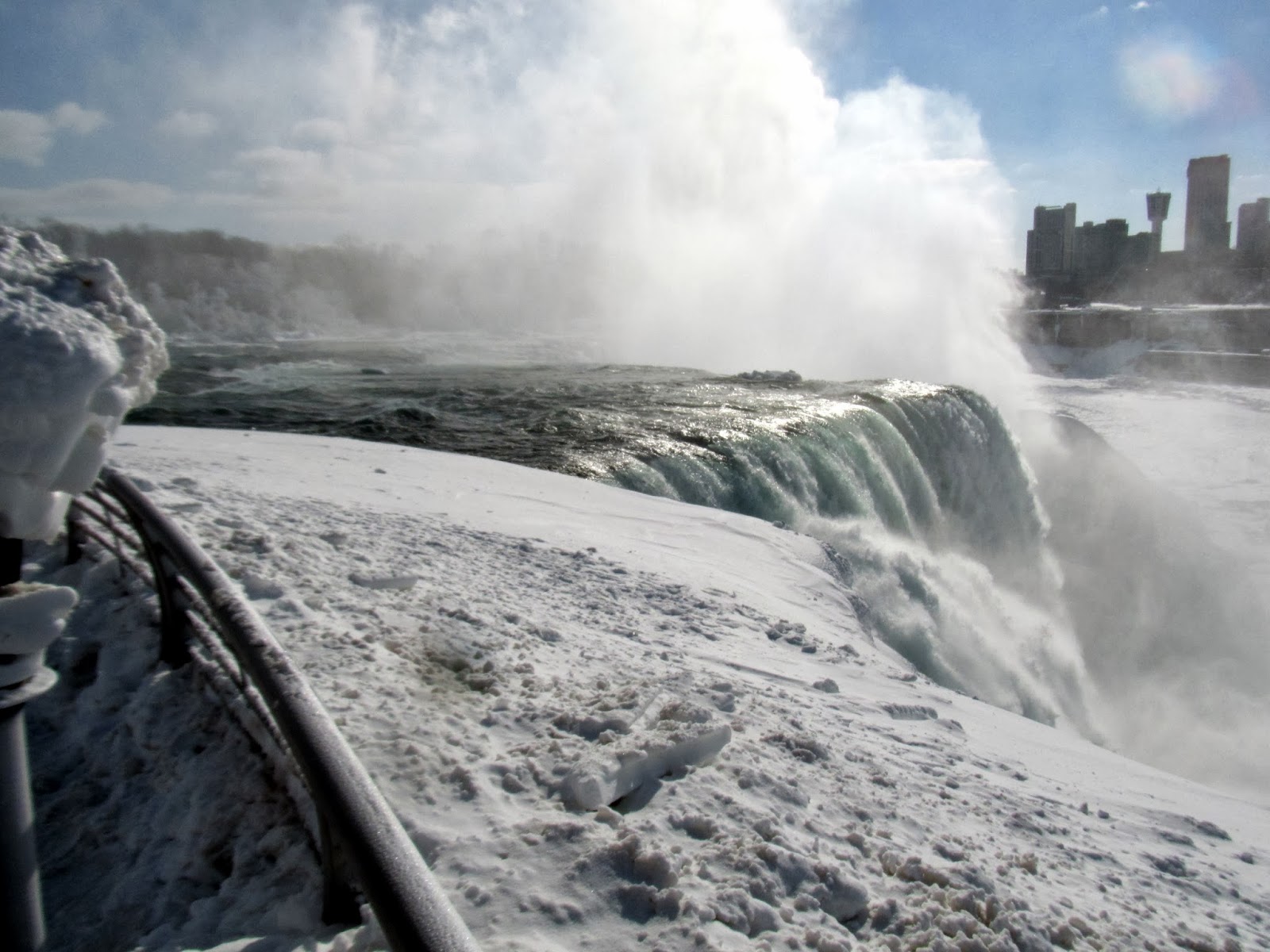 We visited the U.S.side of the falls. On a nicer day -- or at least one less windy -- we would have then gone to the Canadian side, which I've heard is more magnificent. 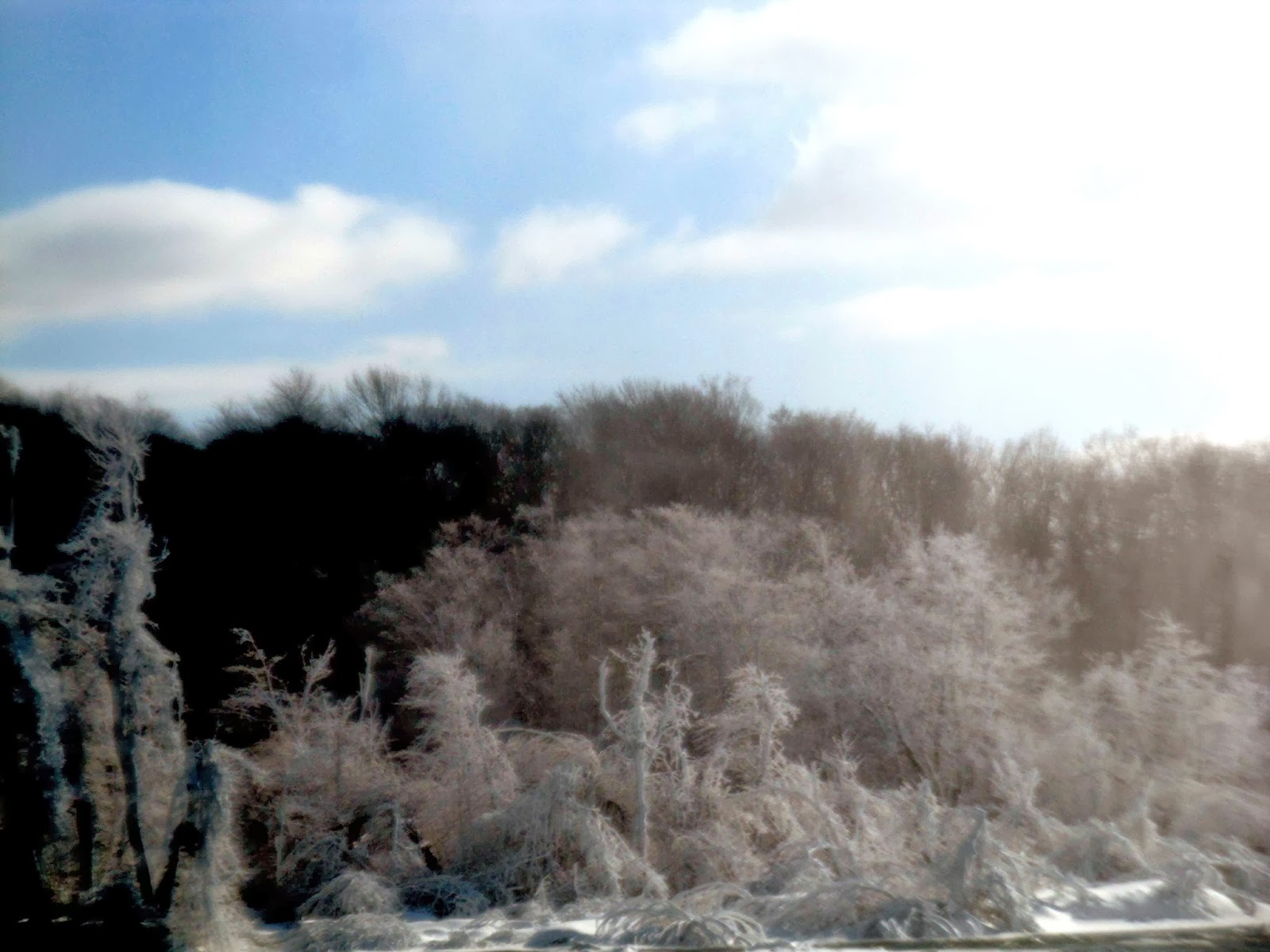 But one close brush with frostbite is quite enough! Nonetheless, it reminds me of how very magnificent this site is -- and how refreshing (in more ways than one) to see it without fighting through a crowd of fellow tourists! 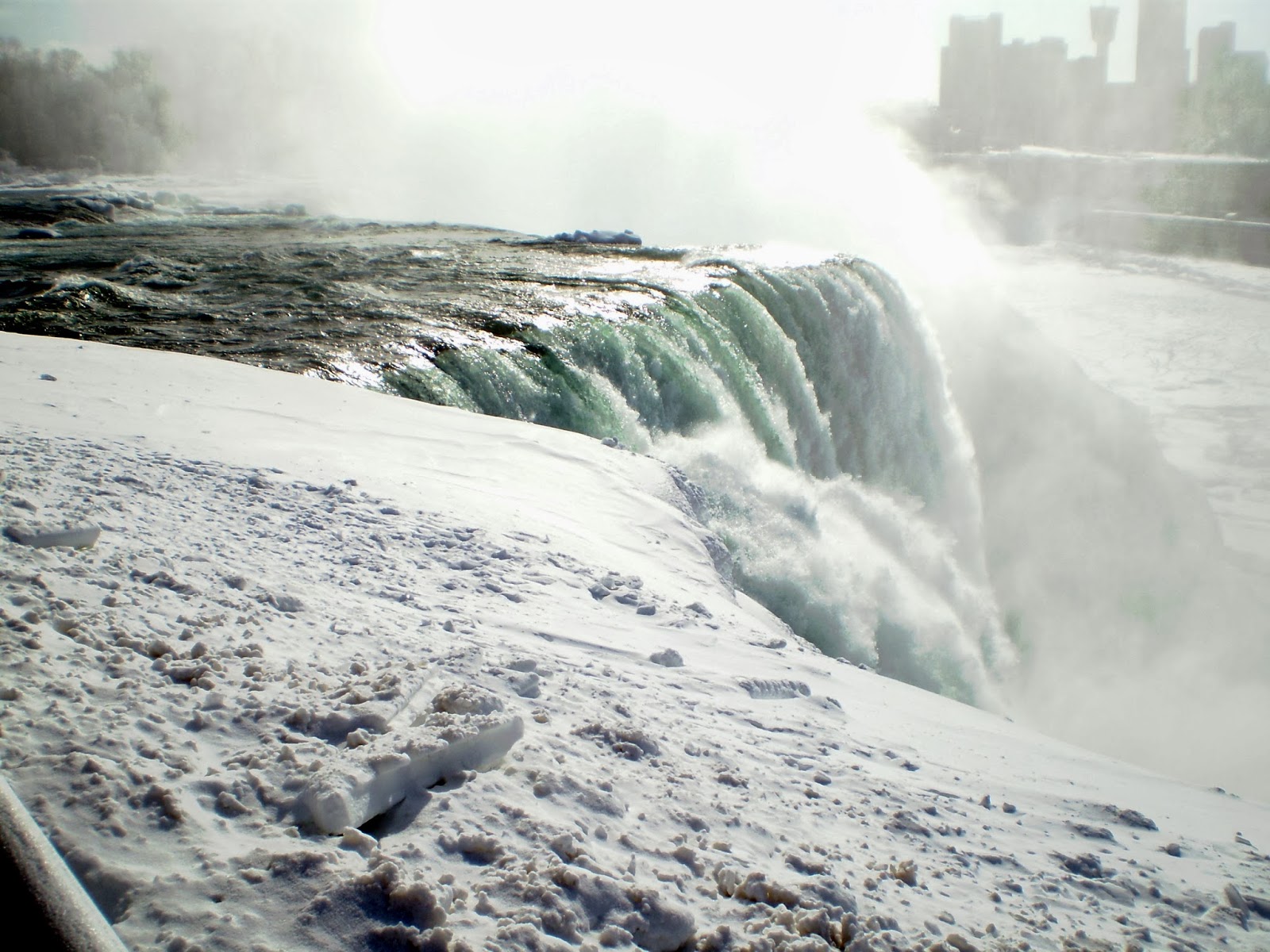 Oh my gosh, Jeanie! How beautiful! Reading this and looking at the photos just gave me chills....goosebumps....and NO, not because I was looking at ice! LOL It's just so...to borrow your word: magnificent! I'm surprised they even allowed visitors there in that kind of cold! AND OMG! -- I LOVE that bit with Abbott and Costello! You and I may be the only gals in blogland that have even heard of it!! LOL I love all the old A&C movies...wish they were on TV like they used to be. Guess I'll have to buy the DVDs. I, of course, love the Who's on First bit, and, OH, have you also seen the Susquehanna Hat Co. ?? Hilarious!! Thanks for the memories!! AND the Niagara Falls pics!

Jeanie,
BREATHTAKING! What a beautiful post, but oh my, burrrrrrrrrrr!
Abbot and Costello, they just hit my funny bone..

Thank you so much for your visit and most kind words.. Yes, Anita and I have become such good friends.. I actually had the great pleasure of meeting her face to face ( and Ruben) a few years ago when she came to California.. We had lunch and visited a few antique shops.. It was just wonderful..
blessings,
Penny

Oh my this brought back memories. We visited (the Canadian side ) during one very cold winter and I remember managing to pull a wonderful piece of ice off a wrought iron fence where the spray had blown. It was exactly in the shape of the wrought iron. Wow! It was a truly memorable experience. I don't think the falls actually froze completely then, though.

It makes me a little cold just looking at your pictures but they are beautiful. Surprising to see the blue sky with the conditions in some of your other pics. I like that you saw the bright side in not having any crowds.

I've been to the falls twice, but both times were in summer.

I'm so glad you braved the cold, and took the trouble to show us what it was like -- amazing!!! Thanks for taking us along!

(And I'm glad you didn't get frostbite!)

How utterly beautiful and amazing! What a treat to see it even partially frozen. I have never been to these falls, but have seen our Multnomah Falls frozen, it is beautiful, but nothing to compare to this. Thanks for sharing!

It must have been humbling to see such a HUGE body of water with such force and to see the ice; here in Minnesota up in Duluth on Lake Superior, the ice "castles" have drawn a lot of visitors this year. The almost chandelier-like formations of icicles has charmed many and put them in awe. This has been a wicked winter for sure, with its own beauty! Oh the sights you've seen, Jeanie!

Jeanie! Good morning and thank you so much for coming to visit with me! Yes, I agree....open paint cans invite the senses to jump in and INDULGE in the play of paint. Thank you! Anita

Surely you've seen the magnificent photos of the colored lights on the falls after they completely froze. If not,an image search for "frozen niagara falls lights" will bring up photos like this.

My favorite photo is your last one, because of the blue color of the cascading water. It's subtle, but it's there. It reminds me of the blue found in glaciers. Just gorgeous.

Hi Jeanie,
How sweet of you to come visit.
Thank you for your encouraging words.. You know, my earth is like clay also, and if it were not for the fact that the sprinklers hit where I was building the fence, I am afraid it would have been a real task.. But the ground there is soft.
The gate will be a challenge, but I will tackle that when it is time.
Have a wonderful day,
Penny

I have never been to the falls but they look so majestic. And with the snow aroud even more so.

Oh my, Jeanie, these snaps are just amazing! Beautiful, awesome and a bit scary at the same time. I'll bet it was super cold too. Thanks for popping in to see me. I think the name of the olden movie was 'Niagara' with Marilyn Monroe and Joseph Cotton. Not a silly movie with Marilyn but a very good drama. I loved it.
Hope your weekend has bee great,
Shelia ;)

Oh my, Jeanie, these snaps are just amazing! Beautiful, awesome and a bit scary at the same time. I'll bet it was super cold too. Thanks for popping in to see me. I think the name of the olden movie was 'Niagara' with Marilyn Monroe and Joseph Cotton. Not a silly movie with Marilyn but a very good drama. I loved it.
Hope your weekend has bee great,
Shelia ;)

It is AMAZING to see the falls in such frosty conditions. I don't know, but they seems like they'd just be flowing all the time, majestic falls they are... LOL! Wonderful photos, Jeanie! Do hope you'll get back there one day--under less chilly weather too. ;o) Happy Days ((HUGS))

Wow that is a contrast in climates….beautiful though!

Loved your stunning photographs, Jeanie I never imagined that the falls would freeze like that. Roger & I visited Niagara many years ago but it didn't look like this!
Thanks for visiting me in Normandy, I'm always so happy that my friends still call despite my long blog absences.

Wow! Your photographs are so dramatic and beautiful! I've never been there -- but that is definitely one of my "must-sees" in the future!

Dear Jeanie
What a brave pair you and Rick are!
The Niagara Falls are on my bucket list but I think Spring or Summer will be my preferred season to visit!
AMAZING photos Jeanie - you're such a trooper!
Hugs
Shane xox

Niagara Falls is a spectacular sight!

Thanks so much for coming to see all my little cow creamers, Jeanie!
Be a sweetie,
Shelia;)

Your photos gave us quite an interesting perspective on the Niagara Falls during the winter. One never really sees photos of this time year. I did see on the news that they had frozen. I can't believe you were there when it was so cold. You two are tough cookies.

I've never been there. I hope to go someday. Jim went there with his daughter a few years ago and thought it was all quite magnificent.

Those pictures are gorgeous!! Even though it was frigid, I bet it was awesome to see it without having to battle crowds. I love winter photos because snow covered trees just look so magical to me!

Absolutely beautiful pics. I can feel the cold in my bones. You guys are such intrepid travelers. I've never been to Niagara Falls. I want to, though. Thanks for the videos. They are hilarious. I do love Lucy.

Gorgeous, but makes me cold just looking at these pictures. Glad you got to visit; hope you get to see it during warmer months too.