It was a cold, snowy day when our Cork Poppers gathered for the first tasting of the new year. And when I say cold, I mean wind chills in double negative digits, ice under snow that crunches like your morning cereal and piles of the white stuff bracketing every street and driveway. Why wouldn't a little wine be welcome? 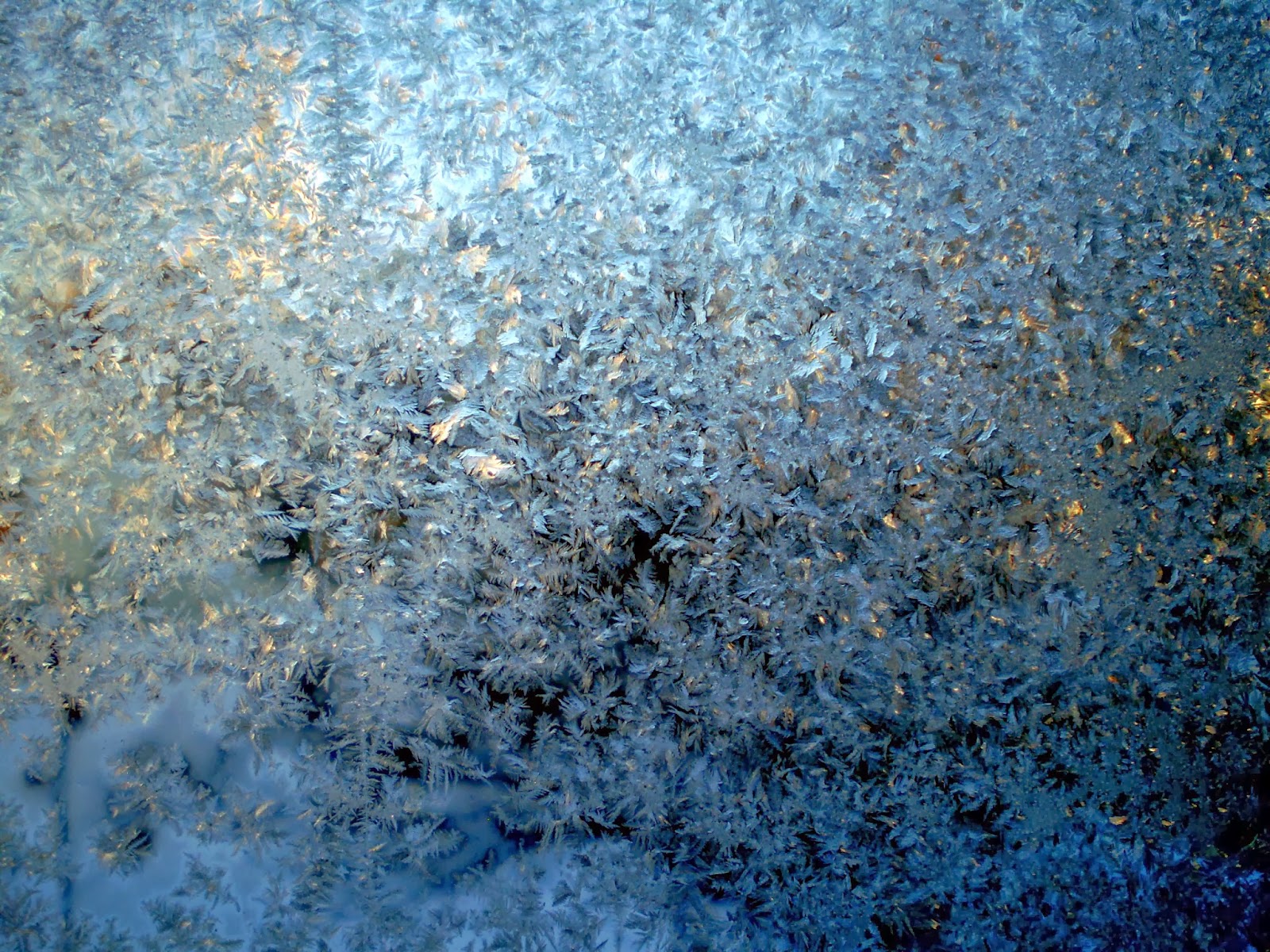 This time we were at Cheryl and Dick's house. Every couple was to bring a wine to share and if we wanted to bring a gift to exchange, we could do that, too. 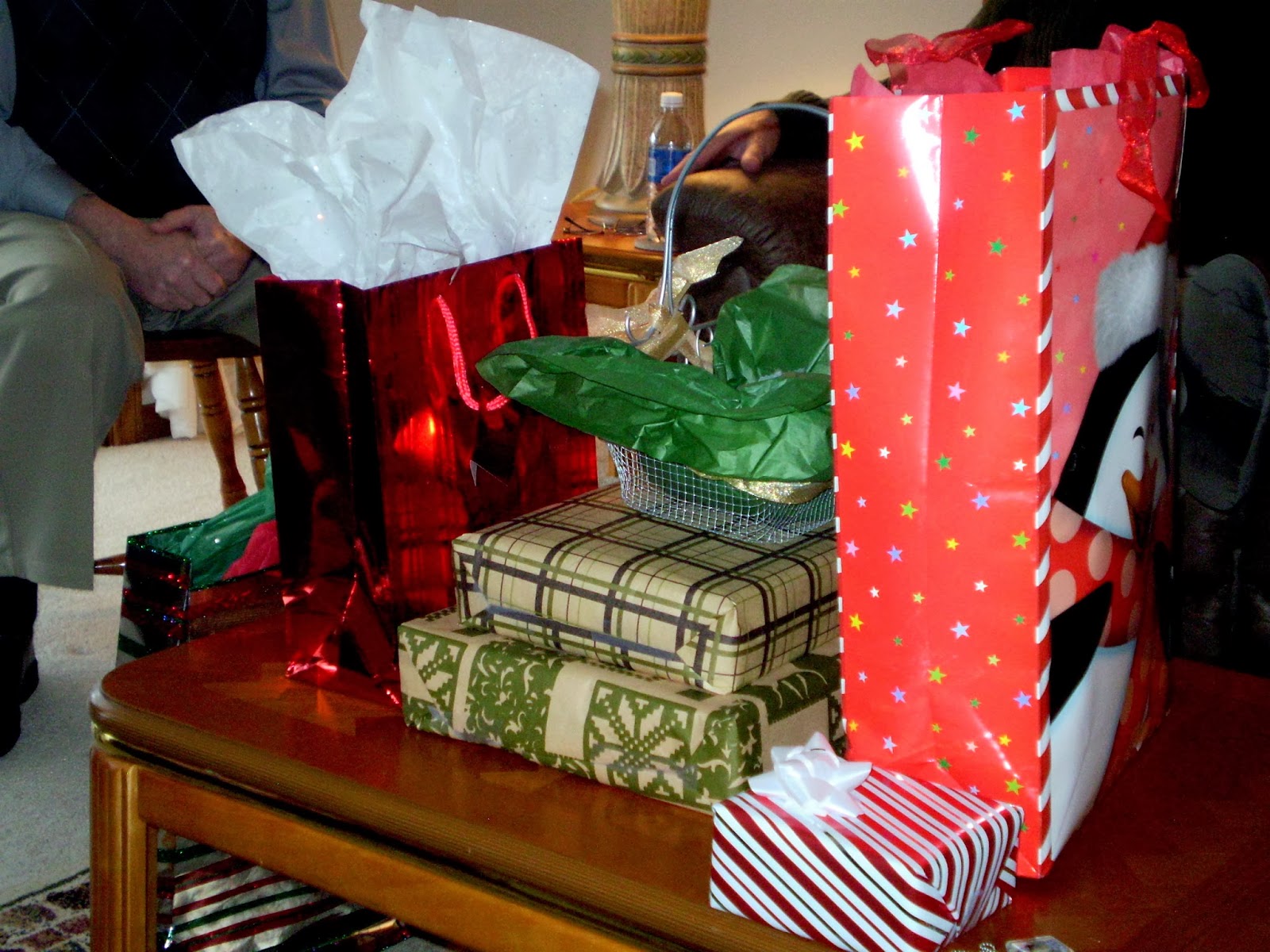 We started the day, though, with a little game, guessing some of the events by the numbers from 2013. Cheryl had found wonderful wine bottle Christmas ornaments and had tagged them with wishes for the new year. I chose "adventure." 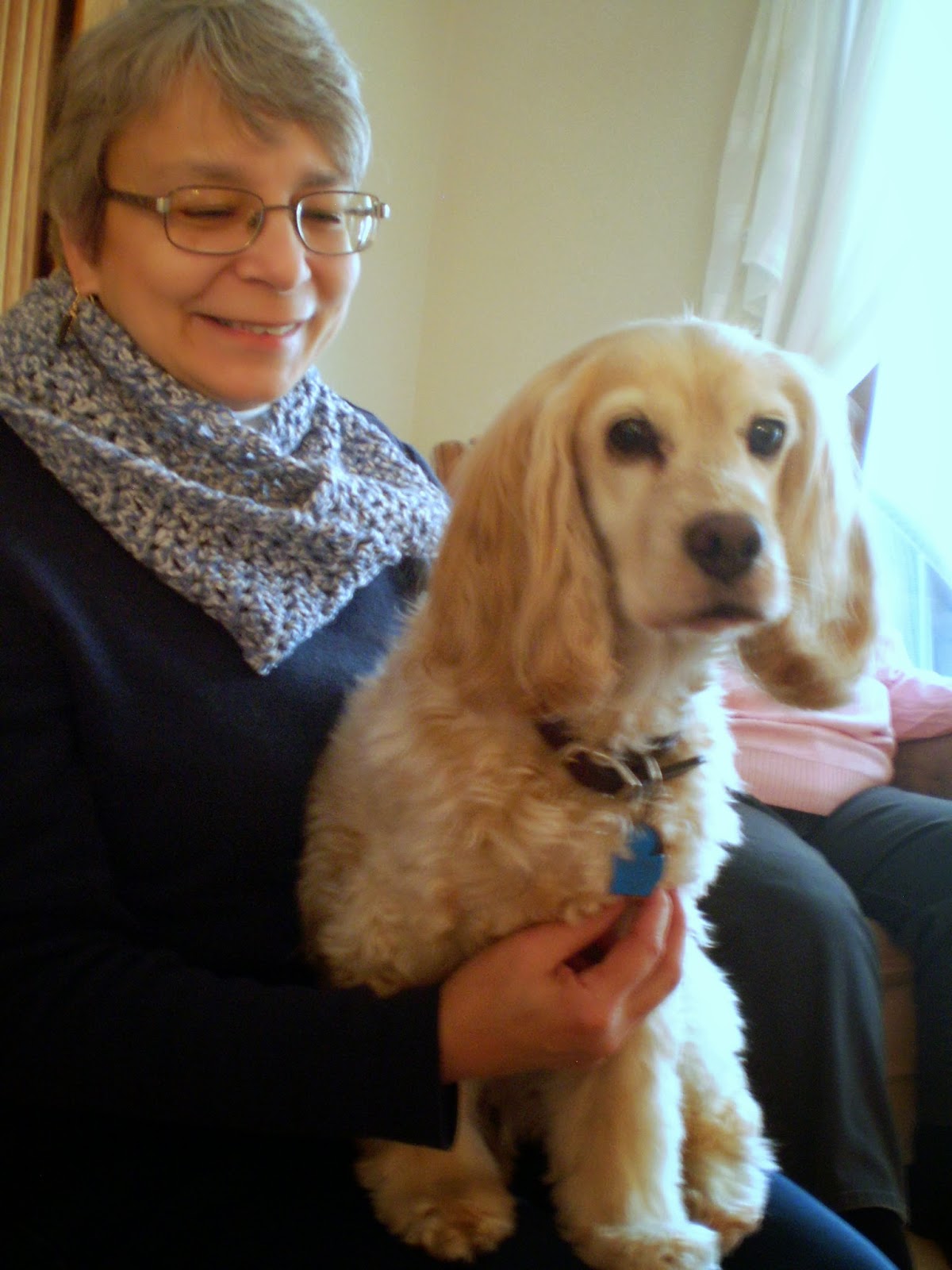 Rick was away and Pat sent a wonderful note to me earlier in the week saying she so enjoyed the Christmas posts on the Marmelade Gypsy that she wanted to pick a wine for the two of us to bring. Worked for me! It was the first we tasted. 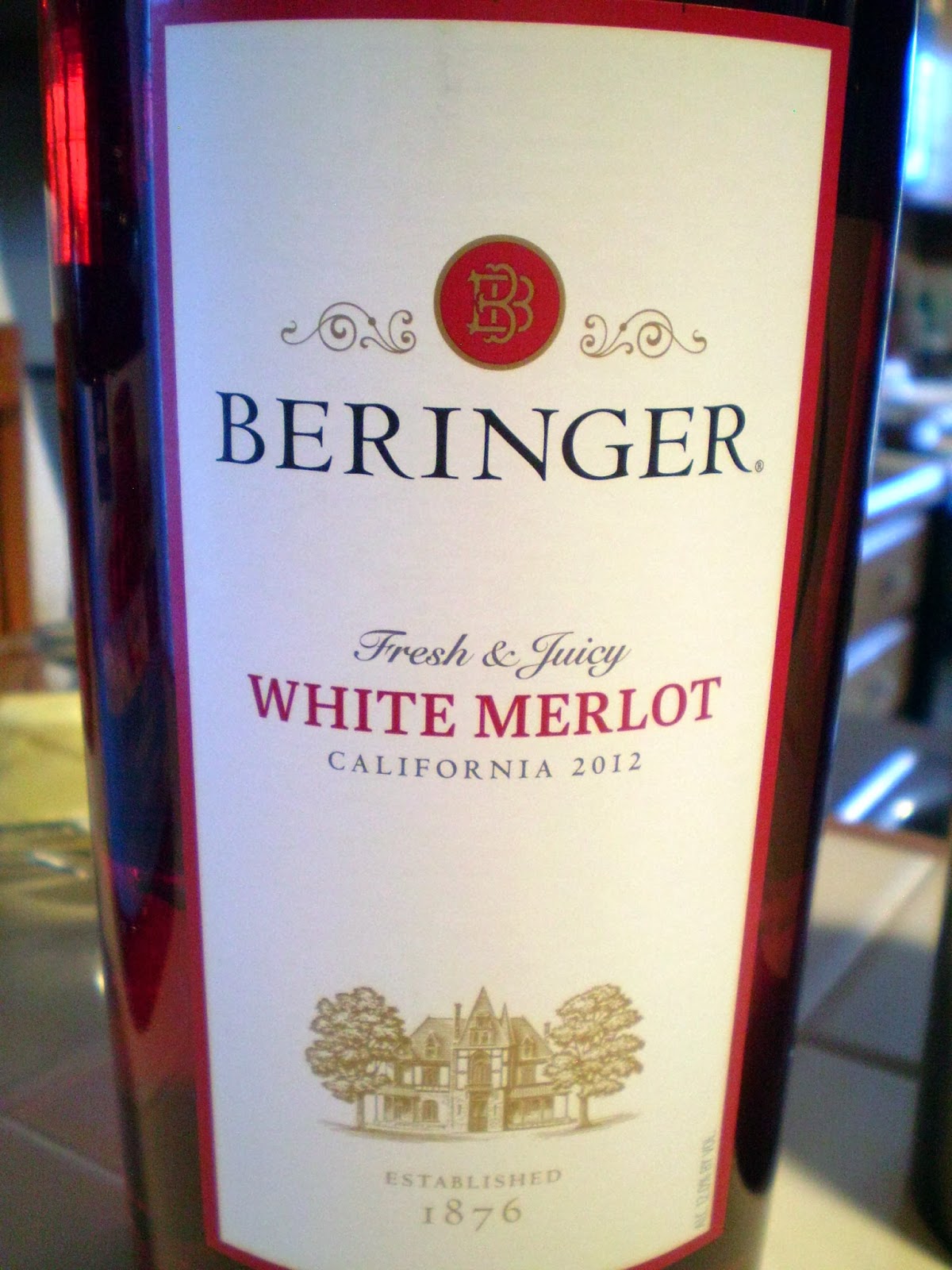 It was a Beringer White Merlot -- and it certainly was a steal. A huge bottle (party size!) was about $10.99 on sale, so add a couple of dollars if you get a non-sale price. (It is very available in grocery stores and markets.) The color was a pale pink, about the color of a Rose. It was fresh -- similar to Rose or a White Zinfandel, but we agreed we liked it better than White Zin. Think hot summer evening on the porch or beach. Fresh, crisp, a little sweet but not cloyingly so. 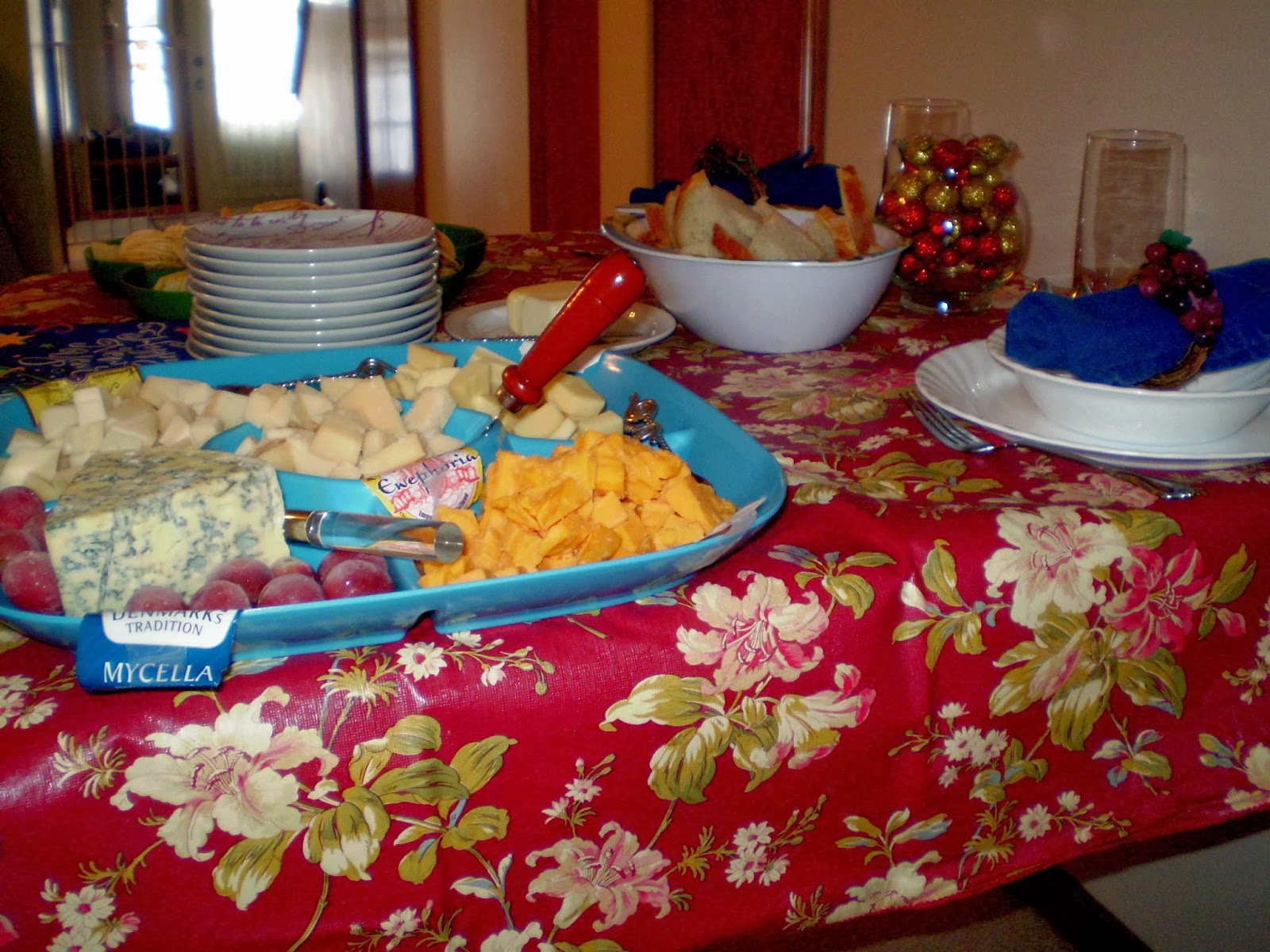 Then we were on to the reds. Mike and Barb offered Monte Antico Toscana, 2009 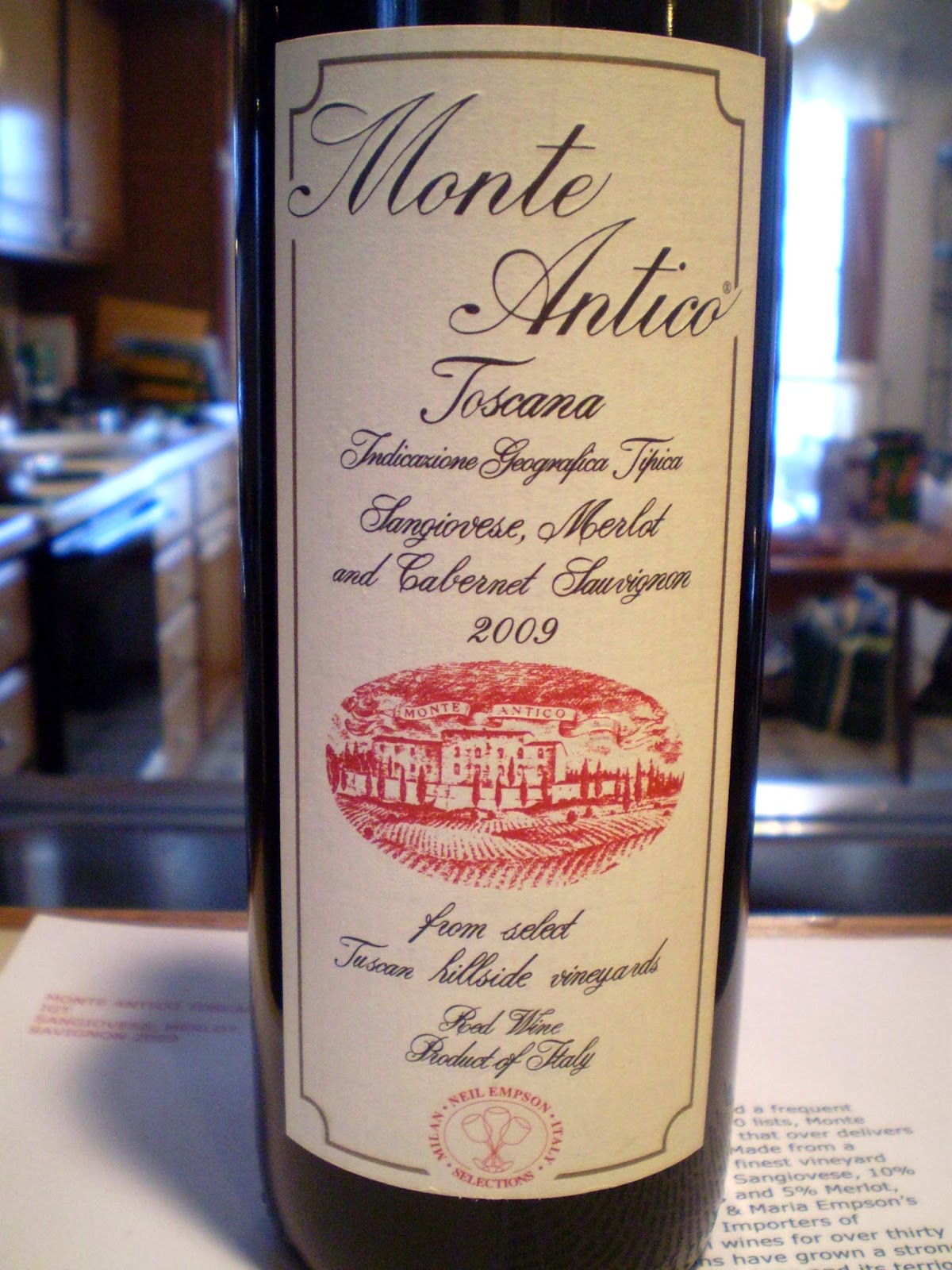 This Tuscan wine was rich and had a wonderful taste of cherry and dark berries with (at least I thought) a hint of cinnamon. It was deep and full bodied and just delicious. It has a stelvin (screw) cap and is a blend of Sangiovese, Merlot and Cabernet Sauvignon. "Drink now!" Mike said he paid $12 for it, but often sees it at other places (including markets and some grocery stores) for about $10. It's well worth it! We loved it with the sharp cheddar and dark chocolate.

Anne and Clayton were up next with an Organic red from France called "O". This, too, was delicious. 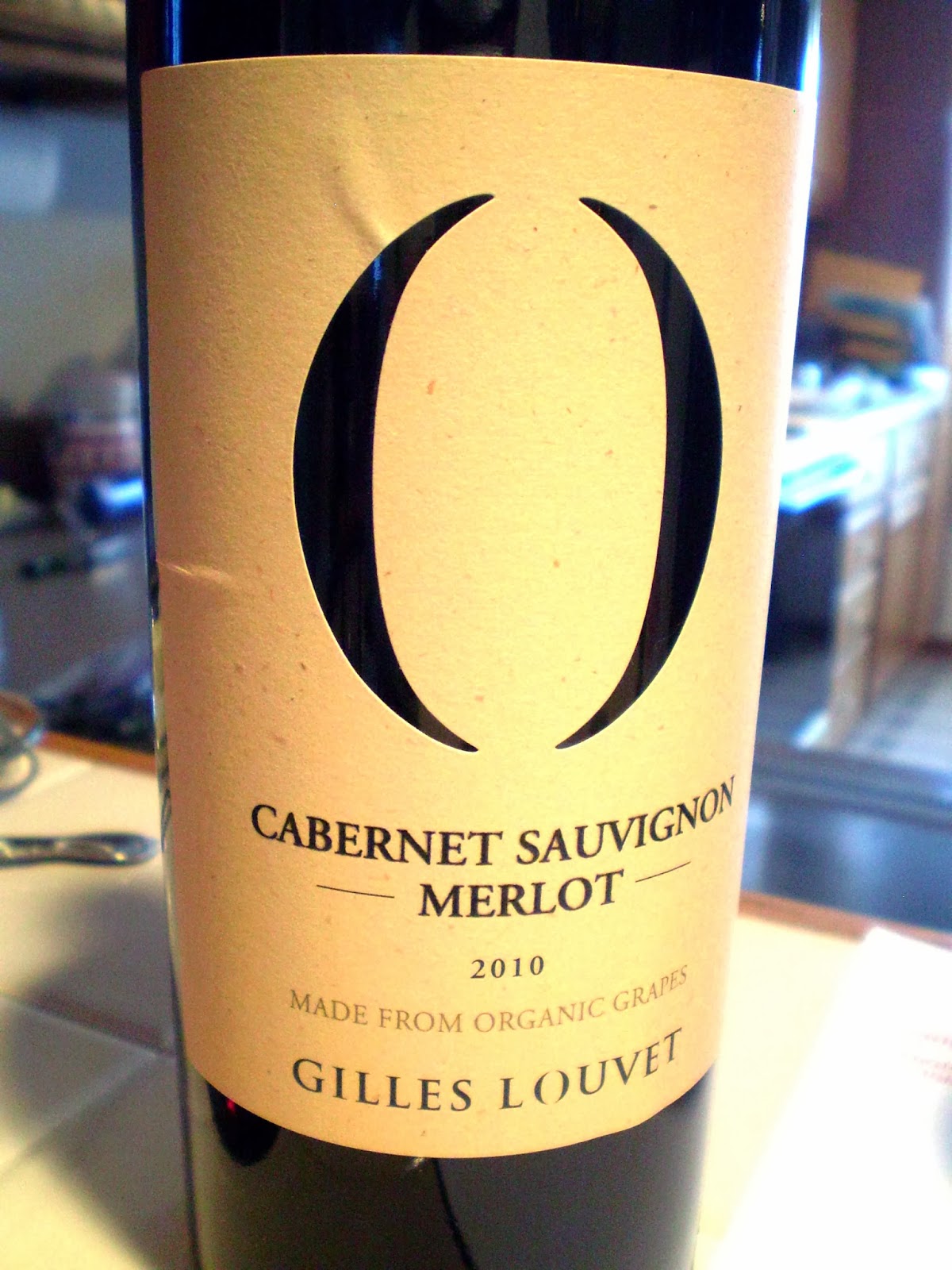 Clayton said the blend of Cabernet Sauvignon/Merlot (2010) by Gilles Louvet that he brought to Cork Poppers was introduced to him from a distributor friend. Clayton estimated it would be $15-20 in the store It had a very nice finish and Dick, who had prepared pork roast for dinner, sighed and said it would have been very good with the pork!

Our host Dick brought out one of his golden oldies from his cellar for the next tasting. It was a Amarone della Valpolicella Classico by Bolla from Italy. It's grown in an area around Rome and it was 10 years old! 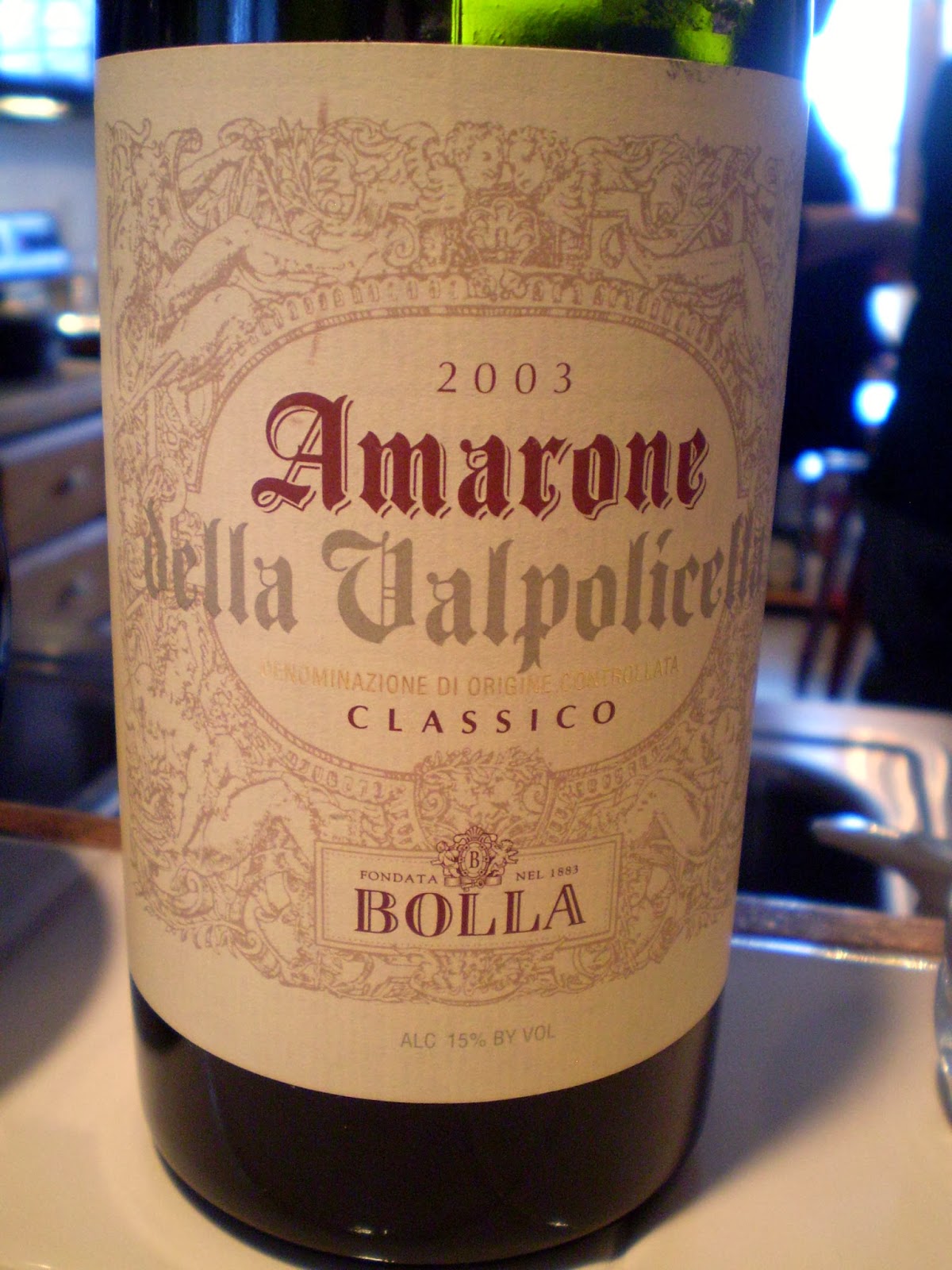 This was definitely a fine wine (It was $30 back then!) and divinely mellow and full. Just one sniff (and Dick had decanted it) and we knew we were in for a treat -- it was very, very rich. It takes cellaring very well. Well over my price range, I was honored to taste it!

Our dinner was a wonderful glazed pork with a to-die-for sauce prepared by Dick, one of Brb's four-star salads, my cheesy potatoes, a spinach/cheese and mushroom dish by Meredith and Anne's version of Ina Garten's apple crisp. That was when we had our last wine, Macaron Prosecco DOC, brought by Roger and Meredith. 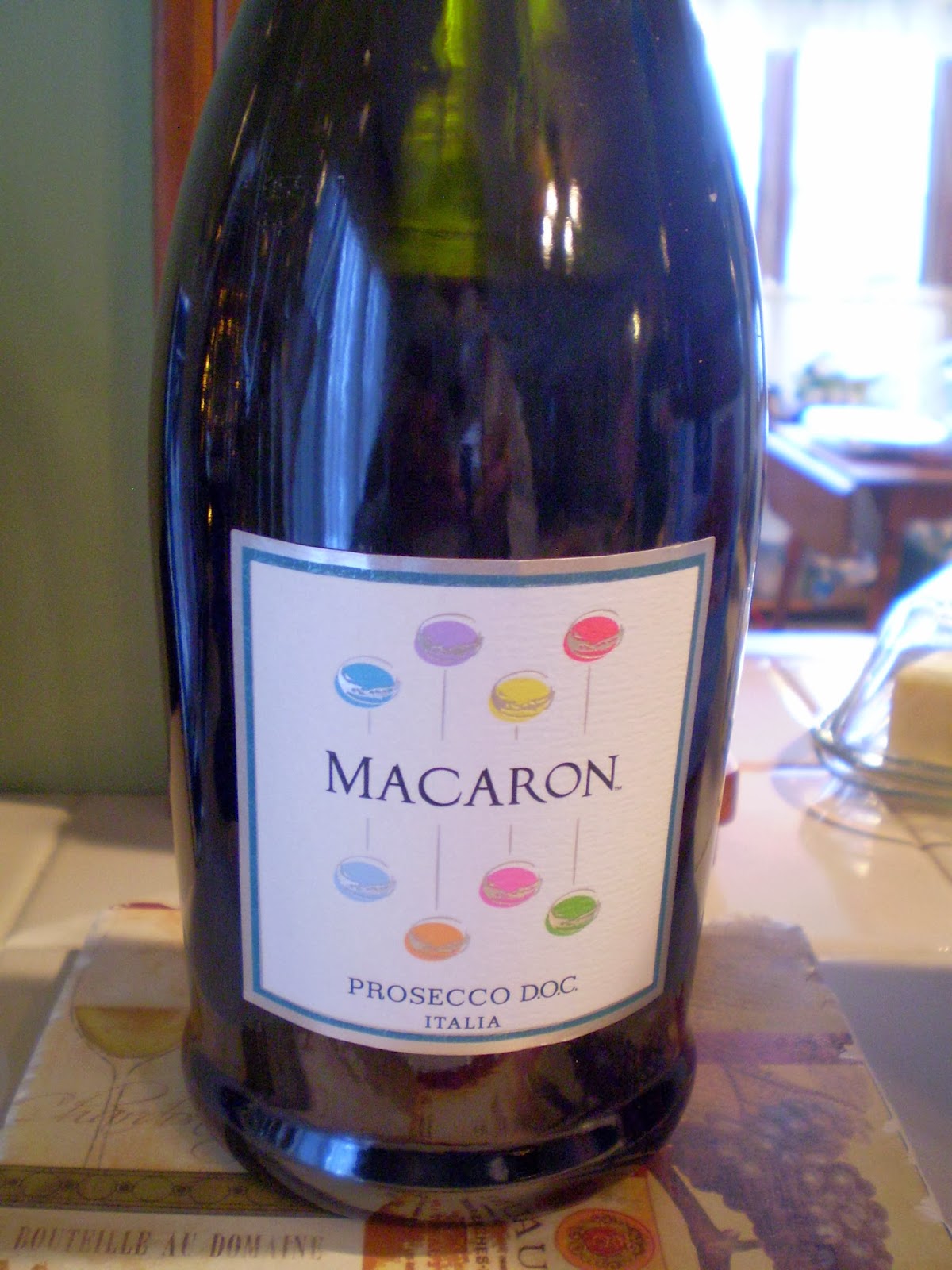 Roger mixed a cranberry juice-prosecco drink for us and it was delicious. This was the same prosecco we had for mimosas on Christmas. I should have had a sip of it before the juice went in so I could give a better assessment, but I'm guessing it was pretty good, because it was great with either orange or cranberry. When I bought some over the holidays it was $7.95. That may have been a sale price, but even if it was, quite affordable. 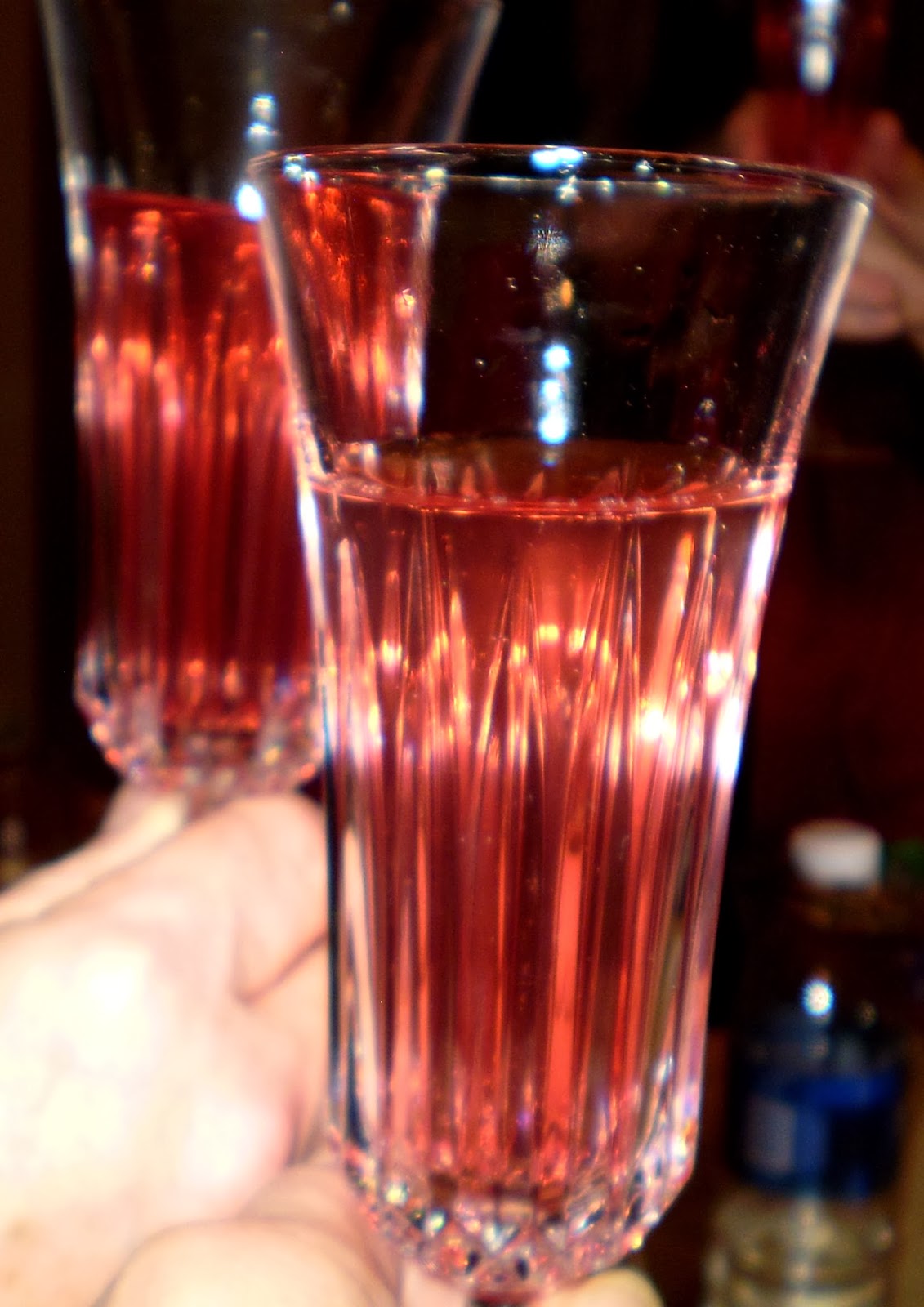 I love our gang, the fun we share, the humor, the good will. The wines are secondary to the joy of being with good friends -- but a pretty close second!
Posted by Jeanie at 12:00 PM

I love reading about your group of Cork Poppers. It sounds like a wonderfully warm and rich group of friends, sharing a common interest or two:). It's also educational, as I know nothing about wine but occasionally need something to take somewhere! Thank you!

I'm glad you braved the weather to meet friends and have fun. We've been hearing big news stories about your weather so it must be bad. The best thing is to create your own warmth, isn't it!

This all sounds wonderful and -- after power outages, snow days, and bizarre drops in temperature -- an exceptionally civilized response to troubles and travails. Cheers!

Hi Jeanie,
Looks as though you all had a great time. Love the dog!
fondly,
Penny

What a nice way to spend a frosty evening!

Joanne Huffman said...
This comment has been removed by the author.
Wednesday, January 08, 2014

It's a great way to catch up and enjoy some wine appreciation. The food sounds delicious too.
I've been drinking a Sangiovese Rose over summer. It has a lower alcohol content and a lighter style which suits me!
I will see if the Macaron Prosecco is avalable here - I'm particularly partial to a Bellini (add white peach nectar). I've used a french one Alain Milliat, but it's quite expensive here so I use it sparingly!
I'm sure there are less costly versions available where you are Jeanie, volume buying effects the price and NZ misses out on such benefits!
I usually add soda or sparkling water - sinful I know but I can't take much alcohol!

We have a weekly drinkies on Fridays from 6-7:30pm - a group of friends to keep in touch. The host supplies the nibbles and everyone brings their own tipples!
Yours sounds like fun!
Hugs
Shane

I love these posts about you and your wine buddies. It looks like you all enjoy each other so much. You are right. It is more about the friendships and the good will. Life is all about the experience... of course, wine is an experience, too. :)

How wonderful to have this group of friends to share together wine and good cheer. That last one sounded rather nice, but maybe it is the word macaron.

Well you won't be surprised to hear that I love the label on that last bottle. :) Looks like the cork poppers are off to a great start for 2014. I love red blends so am sure I would have loved when you sampled!

I'm excited to try a White Merlot. I generally don't drink Merlots because I don't care for dry, red wines. I do like Zinfandel but prefer white Zin. It will be fun the try the Merlot and I'll have a plan B.

Sounds like a great way to learn about new wines and gather with friends. Do you do this monthly? Larry and I never know what kind of wine to get--we don't know much about them. It's trial and error for us.

These gatherings always sound so fun. I learn a lot from what you post here, and I get to be a bit envious in a good way. I'm happy you have these friends and these time. Cheers!

Oh Jeanie- I guess you know where my mind is at when my first thought is "wow those are some cool labels on the bottles".

The White Merlot sounds good. I may give that a try. I favor Beringer wines, so that's a plus, too.

I hope you're thawing a bit. We're back into the 50s, and loving it. Another month or so and we'll be pretty much past the threat of a freeze. Then we can start grumping about the lack of rain! Aren't we funny? It's always something.

Thank goodness we have Cork Poppers and etc. to keep us happy!

so nice of you to take us along for this extra festive Cork Poppers ... WHITE Merlot who knew :)
I am very taken with your frosty/snowflake glass too dear Jeanie...
such a fun and creative group you all are!
oxo

You see, Jeanie, I'm not a drinker. But your wine posts are always colourful and festive. Here's a virtual toast to you for a wonderful, sparkling new year! ;)

NICE way to start the new year... with a few glasses of something! ;o) Going to look for that Beringer White Merlot... We like wines from the Valpolicella area of Italy. That V. Classico is over our budget too--fun to hear about...LOL! Cheers, Jeanie... looking forward to more of your Cork Popper shares as the year goes. :o) Happy Days ((HUGS))

Jeanie, did I mention I want to be just like you when I grow up??? You just have the most beautiful, contagious smile.

BTW, the Women's Circle Traveling Art Journal is going to start soon. Since you would like to participate and we would love to have you participate, stop by the blog to check the details!!!

That sounds like SO much fun!! Great food, friends, and wine...what could be better?! :)
Susan

Sounds like a fun evening. Good food, good company, and learning about something you enjoy -- what could be better. :-)

Hard to beat a wine-tasting with good friends!

Not to mention food and drink. All in all, it makes for a splendid gathering. Wish i could join in.

I'm not a wine drinker but this is a great excuse to gather with friends-- that's really the best part. It looks like you all had a lovely time and lots to taste.
Happy New Year,
jj

Sorry I made Rick miss the first one of the year, but he was a great help to me. I have been reading your blog by email which, to my knowledge, does not have comments but I have been enjoying your writings immensley. It sounds like your health is improving since you retired. You, (we) have lots to be thankful for in 2014. Love you.

My favorite wine--- who knows what its called... is one that tastes like your drinking sweet jelly lol I know, I'm so five lol My grand father used to own a pub in Scotland and so I come from a family of drunks... I mean drinkers. They thought nothing of giving us kids alcohol every Saturday night when the family would get together. I still to this day drink "Shandies" which is half beer and half 7-up--- good times, good times lol
big hugs,
Cheryl