The Cork Poppers are back for the fall tasting -- and this time the theme was the wines of Burgundy. The venue was my house. It's a good thing I retired, because I had plenty of cleaning and purging to do before I could allow people entry! (In fact, there are still some off-limits rooms.) But I got it looking reasonably respectable. 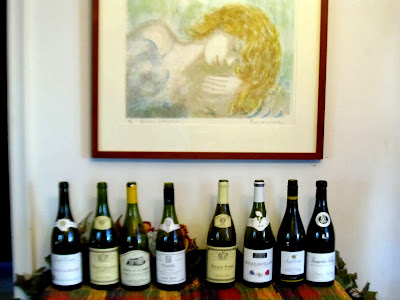 And somehow, I managed to fit two tables into the very tiny family/dining room so eleven of us could sit down for dinner. 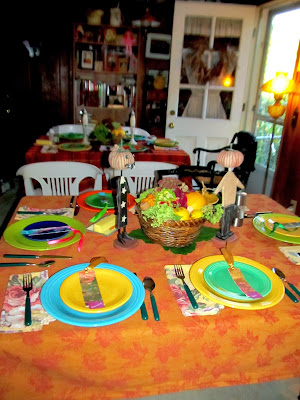 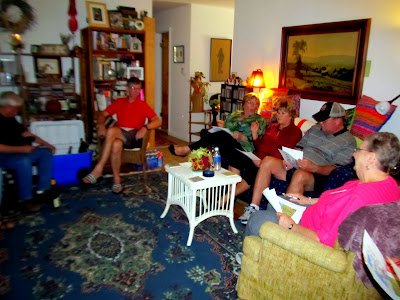 Dick, our wine guide, brought eight wines from Burgundy and the area going from Chablis to Lyon. The price range for these ran form $8.50 to $30. We started with one of the four whites,  Chateau de Le Greffiere, Mason La Roche Vineuse 2011. It has a short cellaring period -- about two years from the vintage year, so in this case, drink by 2013 or else! The price by $18. 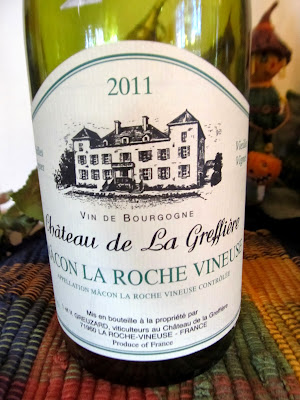 It was a nice start, clean and crisp. "It's the best one there is!" exclaimed Barb, adding "I already have a buzz in my cheek." To which Roger replied, "Better eat some cheese quick!" 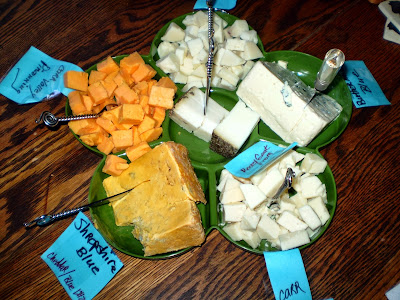 Our cheese and bread platters by Pat and Meredith are one of the finest parts of each Cork Poppers gathering! (Meredith made that very cute pumpkin filled with flowers on the table!) 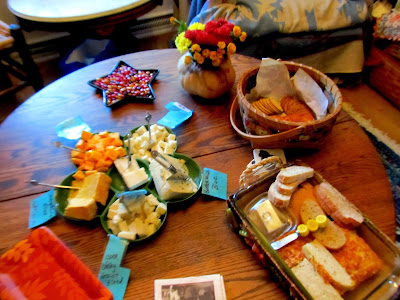 That was followed by Macon-Villages Chardonnay 2012, by Louis Jadot, the negotiant. (The negotiant doesn't necessarily grow the grapes but instead collects the juice and/or grapes, makes and bottles the wine and markets it.) This was an unoaked chardonnay from the Maconnaise region of Macon in Burgundy. 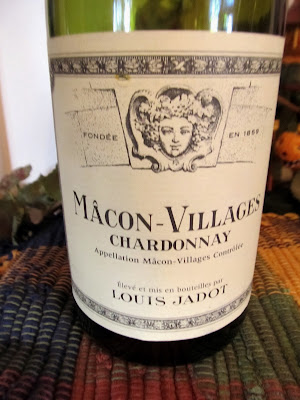 Several of us preferred this one -- when we learned it was $16, I think more of us preferred it! (Again, a short shelf life -- this has to do with the lack of acid in the wine. Reds have a longer cellaring potential.)

I loved the third -- it was Domaine Servin Chablis 2011, Les Pargues.  In fact, I think most all of us did, although some felt it had a slightly metallic smell. I didn't find that. I thought it spicy, peppery, very crisp, deliciious and had a nice long finish. Alas. It was $23. "That's a shame," someone said. It was simply delicious and later when comparing, most agreed it was a favorite of the whites. 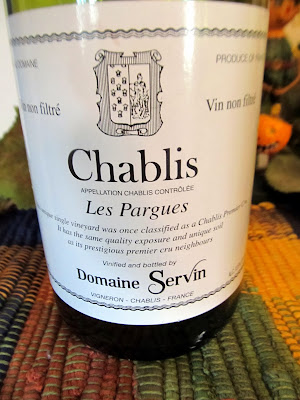 That was followed by Louis Jadot Pouilly-Fusse 2011. "It'll tickle your tongue!" Rick said, though he agreed he liked the chablis better. Aged six months in French oak, Cheryl thought it tasted like urine and was ready to put in the slop bucket (but she ended up giving it to Roger instead.). Clayton said "the longer it sits in your glass, the better it tastes. In the end, at $28, I don't think any of us will be buying it. 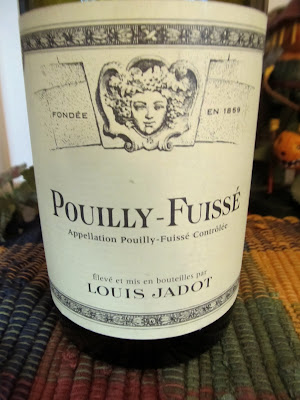 Then it was on to the reds with a popular and easy-to-come-by wine, Beaujolais-Villages 2010 by Georges Duboeuf, clearly the winner of the pretty label contest and the best price ($8.50). This uses the gamay grape and was initially peppery. I wrote "It's OK. It's no bordeaux, but it's OK." Someone else called it "really lame." 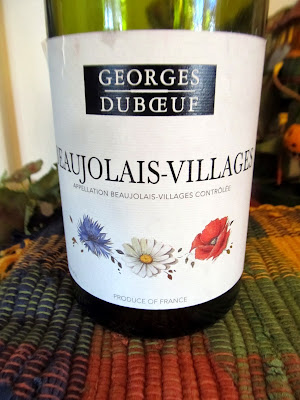 Then we had another that was also gamay grape, Beaujolais-Villages 2010 by Louis Latour. Same grape, same region, same year. No comparison. Dick said "there's more going on here with flavor and texture," and Mike agreed it had "more depth." It was also more expensive -- $14. 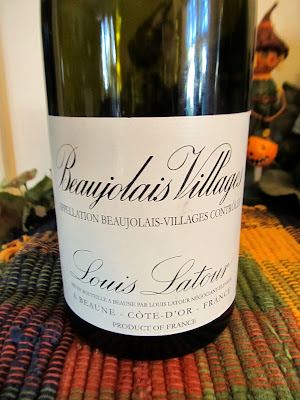 Laforet Bourgogne Pinot Noir 2011 from Joseph Drouhin was a stelvin (screw cap). It had fine tanins and I wrote "It tastes really good but wimpy." Mike agreed -- it felt a little watery. On the other hand, he also said "I hope it's cheap, because I would buy and cellar it," knowing that it would be one that would improve with age. Rick also liked it better than the other two. But at $18, I didn't think it was worth it. 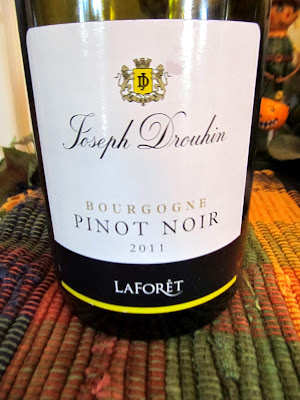 Dick saved the best for last -- Chorey-Les-Beaune 2009 by Joseph Drouhin. This was 100 percent Pinot Noir aged in new French oak barrels for 12-15 months. The newer the oak, the better (more) flavor as none of the flavors from earlier vintages are absorbed. We all agreed it had much more depth and Clayton gave it the official stamp of approval when he said, "You could have a couple of bottles of this while barbecueing. 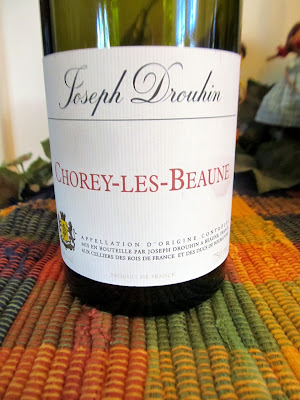 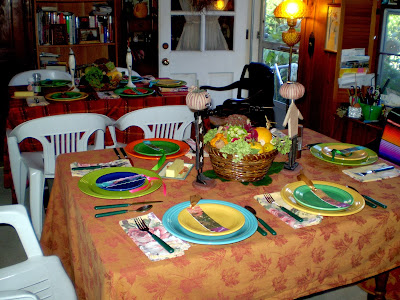 One of the points we discussed today was that the price for wines from France had increased. According to the wine guy where Dick gets what he brings to the group, they aren't buying nearly as much French as they used to because of the price increases. Pity. (See the end of the post for our French dinner wine -- a bargain and yum!) 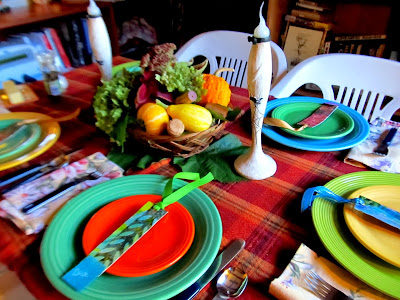 Tasting wine, then time to dine! Our dinner began with Anne's amazing salad. 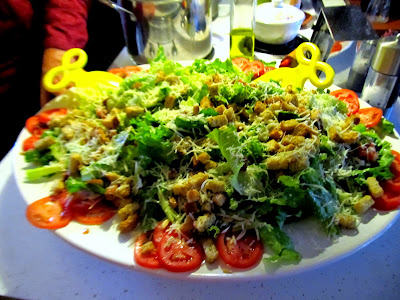 The Rick dished out the Boeuf Bourguignon -- Julia's recipe. (Here is a close adaptation with photos -- the original I used was in "Mastering the Art of French Cooking." 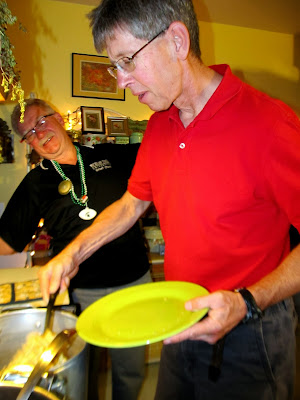 Julia says one can make it the day before and it's even better. So, that's what I did -- it took about six hours (I was making a double batch) but it was worth every second! 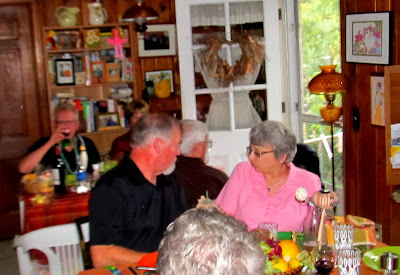 Everyone seemed pretty happy eating it! It was accompanied by a Madoc from Trader Joe's, Chateau Amour. At $7.99 it was the bargain of the day! 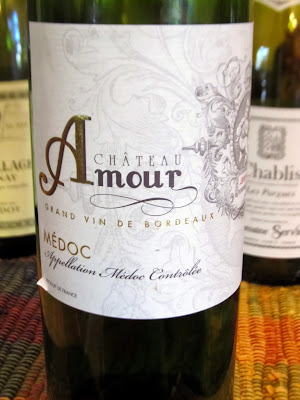 Barb's cream puffs wrapped up the feast. I wish I'd taken a photo because they were gorgeous! With whipped cream and chocolate squiggles on the white plate, they could have been served in the finest French bistro. 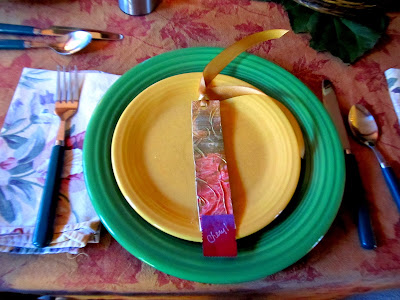 Our party favors were hand-made bookmarks. It is, after all, reading season! 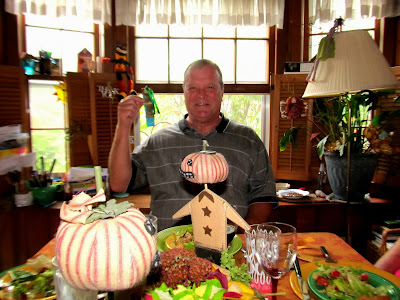 Centerpieces relied on things at hand -- round baskets, leaves from several varieties of coleus, hydrangeas, seedum blooms, a selection of my home-grown gourds and of course, wine corks! 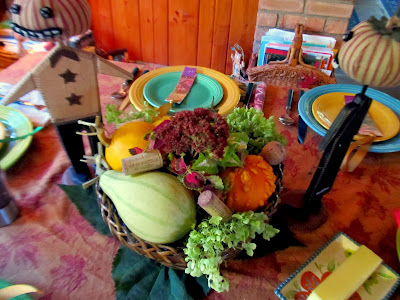 As always, a day with Cork Poppers is filled with laughter, friendship and delicious flavors. If you are fond of wine, you may want to check out a few of these (especially the Chablis and the Chorey-Lea-Beaune -- if you have the budget for it!
Posted by Jeanie at 9:15 AM

It sounds like such a fun night...good friends, good food, and good wine...makes for perfection....

I always enjoy your posts about the Cork Poppers - I feel like I'm along for the fun.

That looks like a splendid dinner! Glad your BB went well.

That sounds like such a great way to taste a lot of interesting wines - so companionable!

I love the details you share with us from your Cork Popper events. It looks like such fun from the first cork popped to the bookmark party favors.

wow Jeanie it looks like the wine and cheese tasting was a huge success. I especially like the table setting. It is so colorful and festive. The salad looks yummy!

Your center pieces are beautiful and so is your table setting. I love gourds and pumpkins and all things autumn. I've never grown gourds.

I love your "Cork Poppers" posts. I like wine but know very little about it. My favorite thing about these posts is the food. I love the food and table setting pics. I would like full access to that cheese platter.

Such a fun group you all are and it is fun to be a fly on the wall at your gatherings...
Thanks for sharing Jeanie...
you had everything looking fabulous and your bookmarks are lovely too!
oxo

looks like such a joyful time!
makes me want to pull some tables into the living room and invite folks over for some togethering:)
And I'm oh so thirsty for some vino, as well.
I love the way you live....so much
celebration of the sweet things.
thanks for the rich inspire,
Jennifer

Though I don't drink wine I can certainly appreciate your review. This would be exactly the sort of review a tea connoisseur would write. And when we have tastings it includes nibbles and food. Love the Fiesta ware and colorful tables. The food sounds oh so good and you are right, what a beautiful salad.

Oh how fun. This is the complete package: good friends, lots of good wine, good food, colorful place settings, delightful centerpieces, and a new bookmark to take home! I loved being there from the distance. Cheers.

I know nothing about wine but I still enjoy reading your posts about your Cork Poppers gatherings. The food and table settings are always fun to see. It looks like a fun group of people. I'd love to be a fly on the wall just observing everything and absorbing the fun.

Sounds like fun.... but I'm thinking, "What are you going to make with all of those corks?" LOL
big hugs!
Cheryl

Everyone looks like so much fun! And the food? Looks yummy!!!

Enjoy your week my friend!!

How nice to see you tasting all these wines in good company! The Burgundy wines are mostly quite excellent ... and it's such a nice region to visit. You should (if you haven't already) take the little roads between Dijon and Beaune and a bit further south; every five minutes you will arrive in a charming village with a famous wine name.

This looks like a fun group! Alas, I LOVE the Pouilly-Fuisse - I am banishing Cheryl's comment from my mind. Colorful table and tasty eats - looks like a party, Jeanie. Hope you're loving retirement and feeling well.

Oo, I love the bookmarks! What a fun party favor! I was recently at a book-themed wedding and that was their party favor - so fun!

We made this dish for one of our Julia nights - can't remember which one! It was a lot of work but was so divine. We made it the day before and reheated it as well. So delish. Looks like such a fun night!!

How wonderfully warm, colourful and friendly it all looks, Jeanie! I don't know much about wine, and always feel a bit of a fool at wine tastings (I know what I like....) but I would love to be part of that sociable looking gathering.

Such a fun get together dear Jeanie!
As you know this is the part of France where my family live.

I've been to a 'cave' in Chablis and bought a few bottles of wine - sadly I've forgotten the names!

We had Sunday lunch at a superb restaurant and it was probably one of the best meals I've had.

We have Friday drinks each week - 6pm to 7:30 - with a group of close friends and meet at one anothers homes - it's a lovely catch up.