ArtPrize -- Some of the Others

Now, listen up! I'm going to share with you a bit more about ArtPrize! 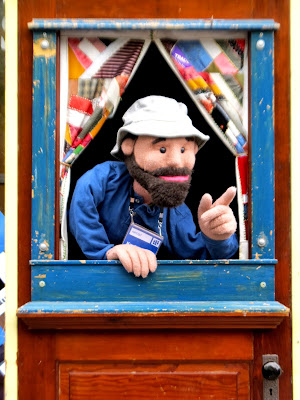 I wanted to wait until they had announced the Top 10 and winners before posting more images on ArtPrize here. But first, let me say Greg landed in the Top 50 (we don't know where -- could be 26, could be something else). We're tremendously proud and thank you for all your support. 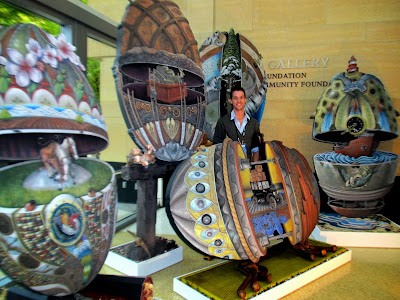 I didn't see as much as I would like to but here are some of the items that caught my eye in the building where Greg's work was located.I will say not all of these are my favorites, but I'm sharing because of their diversity. (Apologies to those I've photographed but did not have names for.)

This was a very well done painting that to me had a Norman Rockwell feel about it. I couldn't get far-enough back to get the whole thing, but as you can see, the train is being stopped... 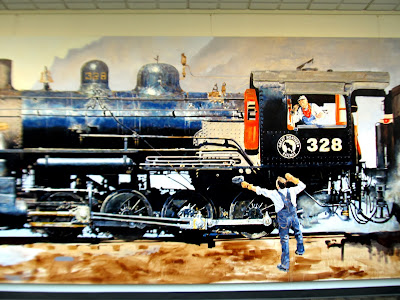 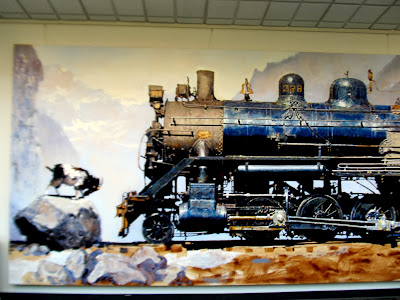 Next to it was one of my favorites -- a beautiful hanging fabric flower by Jill King. 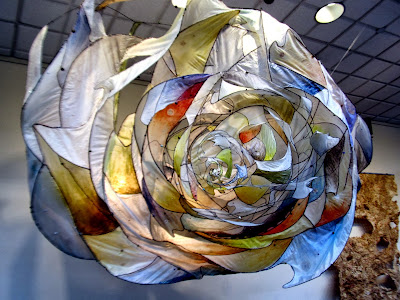 The way it captured light was dazzling. 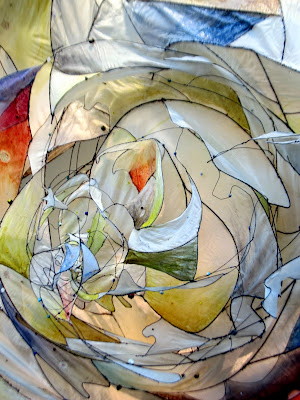 Speaking of fabric, this Christmas quilt by Mary Buvia caught my fancy. I love that ArtPrize offers art in all media, including fabric. This was huge. 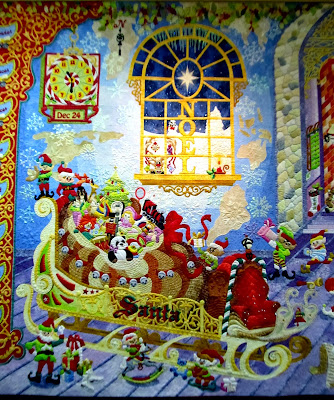 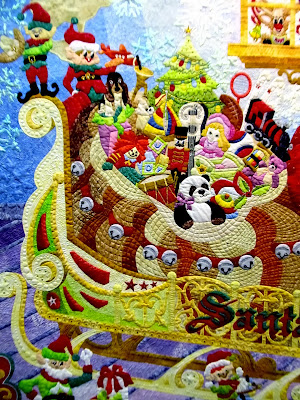 And the back was as lovely as the front. 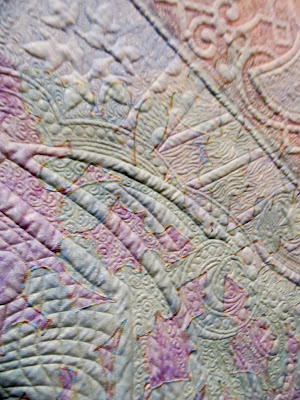 This one was right by Greg's exhibit. Taking Flight also made it into the Top 10 (It ended as #9). It was lovely and ethereal, but I think I was less impressed with it than many others. 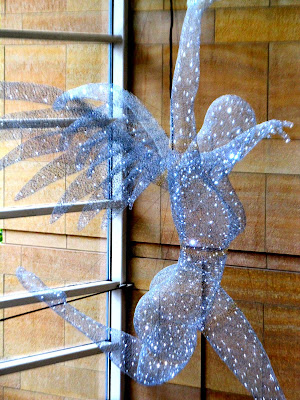 This one made it into the top 10 (Ended up #8) and is by Fraser Smith -- it is a quilt carved in wood. I admired not only the carving but the painting was exquisite, catching the drapes and folds of the fabric beautifully. 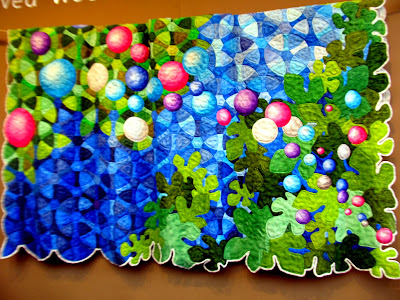 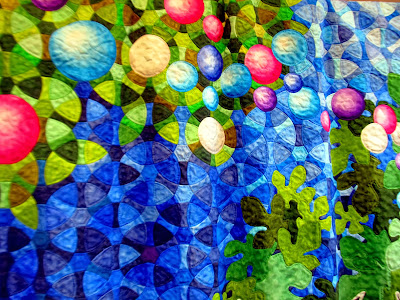 (To hear what the judges had to say about this and the angel above, listen HERE. It's long but for those of you who are professional artists, it's an interesting discourse by some of the country's well-known art critics.

Small items in ArtPrize never score well with the crowds. They look for the "big" and the "showy." Too bad -- this crystal arrangement was elegant. 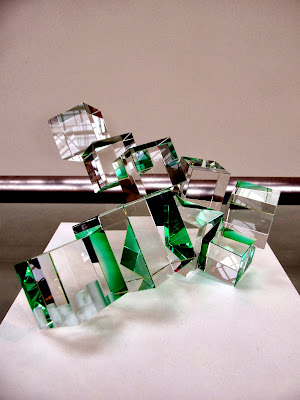 This was one of my favorites -- beautiful glass flowers by Jason Gamrath, all a good eight-feet tall. 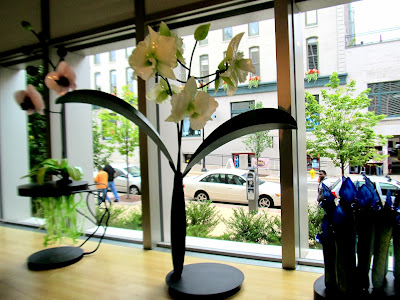 These weren't in Greg's venue. But the lighting was fabulous! 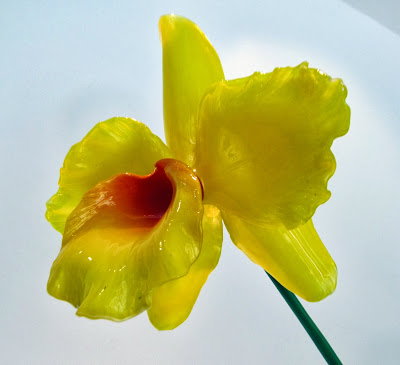 I thought this wooden sculpture whimsical... 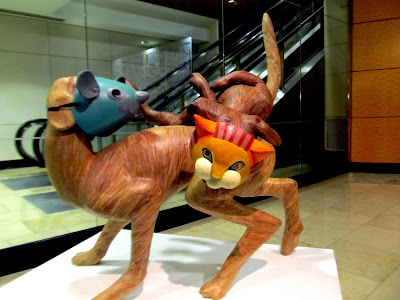 And I esecially liked the puppet show, which was titled the Cooperfly Puppet Troupe. 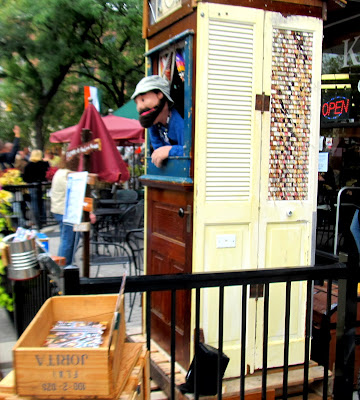 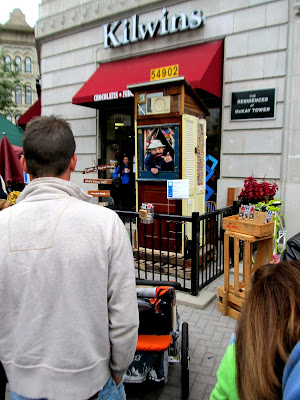 A few comments on ArtPrize -- First, it's a wonderful event that packs the streets of Grand Rapids with people. It's terrific for the city and for the venues. For the artists it is a place to be seen. 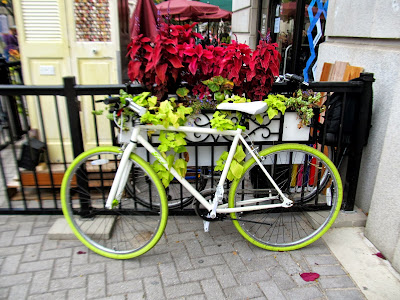 But the prize issue is like a lottery. It's a popularity content, pure and simple. Listen to the discourse and you'll get an idea of that. In a way, that isn't surprising. Art is subjective. Your favorites and mine will or may be totally different and that is all right.

But because it is virtually impossible for any one person to see everything unless they live in Grand Rapids and can return often, the votes are based on what one sees -- and so a fair vote is nearly impossible. The only thing too bad about this is that there is so much prize money at stake -- $200,000 for the first-place winner. 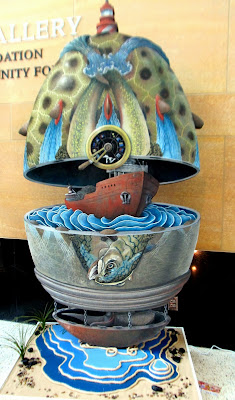 The artist who works "small" or is in an untrafficked venue doesn't stand a chance to be seen, much less receive votes.

If I were to organize ArtPrize, there would be categories -- I'm not sure how I'd do it (by media, by size, by venue --  indoor or out?) but it would break things down so the smaller artist had as much a chance as the bigger one did. Grand prizes would be smaller, but there would be more of them. 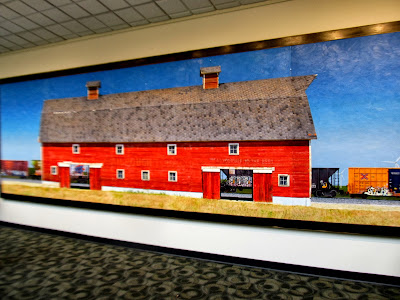 My friend Judy brought up the idea that it should be Michigan artists only -- keep the prize money in the state -- and that makes some sense. Or at least a Michigan winner and a non-Michigan winner.

But what I DO love is the diversity. I love that I can see that exquisite Santa quilt getting plenty of people's admiration, just as much as I loved the puppet show. I liked the variety of media and the creativity of it all. 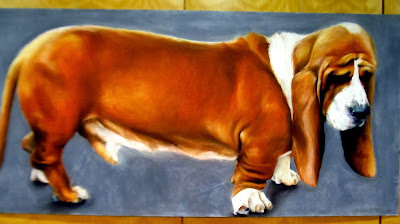 Email ThisBlogThis!Share to TwitterShare to FacebookShare to Pinterest
Labels: ArtPrize

Thanks for sharing your visit to the Art Prize exhibits in Grand Rapids with us. One of my quilting buddies went; I wonder if she saw that wooden "quilt."

I've never been. It was my impression that it is HUGE and overwhelming. I agree -- it's too bad it can't be for Michigan artists, and too bad it's a popularity contest. I also agree it would be nice if there were more categories.

It's great to have a big event like this in Michigan! Someday I'll have to go and see some of it!

Good morning, Jeanne. What a great show and so glad Greg participated. I always enjoy seeing his work when you post it here. My particular favorite of what you posted here was the two dogs playing Cat and Mouse. I love the artist's humor and how wonderfully he/she captured the crazy antics of dogs. It reminded me of the rough and tumble play of Delly and Tanner.

I missed Art Prize this year (good reason - I was in Italy), so I'm really enjoying your Art Prize posts.

Well done for Greg for getting in the top fifty. But I do agree that "popularity contest" prizes are not really fair. I feel it would be more helpful to divide the prize so there was a top prize of say, half that, (which would still be good) and then divide up the other half among, say 25 winners. Much fairer.

Well, on the other hand, if all the prizes are the same or nearly so, there's no "grand" prize. What might be workable is to have several categories, and then find a way to put the winners in each category into another competition, and have the grand prize go to that winner.

There certainly is a variety of entries. I liked the crystals myself, and I can see how they might not get the attention of the 8' flowers!

Still, it's a wonderful event. I can imagine feeling just like that puppy dog at the end - worn out and sad. ;)

There are plenty of venues where an artist can compete on a more "equal" playing field (medium-specific competitions and the like.) I think even the artists who won would agree that it's a popularity contest; that's how it was set up. As in other parts of life, the preparation & decision making BEFORE the actual event greatly influence the outcome. And that's art! I'm just glad people are out there looking at art, talking about art, being inspired by it as well! It works well for what it is, & I admire the powers that be who organize and orchestrate this tremendous "happening"!

These are all exquisite! And so creative! I'm lost for words as to try 'categorizing' them. But pardon my ignorance, is there a term for this sort of artworks? Multi-media installations? What a joy it must have been to see them. I'm sure you all are proud of Greg's placement. You're right, so hard to judge them all.

This has been a lovely and thought provoking tour dear Jeanie...thank you!!!
oxo

Hi Jeanie! Oh, what lovely things to see! I would have loved to have walked along side you and eyed all of those wonderful things. Thanks for popping in to see me.
Be a sweetie,Shelia ;)

some of these pieces are exquisite!

What a fantastic exhibit. As a quilter I was blown away by the Christmas quilt and the actually quilting. Wow! That times a lot of time and patience.
Thanks for showing us the great art.

Loved seeing all of the art, but sorry Greg didn't win first prize. What a alot of creativity by Greg and the others.

Amazing, amazing, amazing. So glad Greg did this well - and your choices to share here are so diverse and beautiful. I am constantly amazed at the amount of talent in this world, for so many different things! Thank you for sharing. Oh... besides Greg's, I love the quilt out of wood and the beautifully draped fabric which looked like a flower to me!

thanks for showing this eclectic
bouquet of beauty....I love how creative and diverse!
Quilting amazes me....I can't imagine how a person has the patience.
I like your ideas....spread the prize money out between lots of categories.
Glad you got to enjoy,
Jennifer

Wow! That Christmas quilt is something else. So much time and love devoted to it. Hoping all is well with you and you are enjoying fall. Thank you for coming by recently. Always love seeing your comments. Happy week to you!
Xoxo, Kirsten

The standard of work is certainly very high.
I am sure you are right, there ought to be categories and smaller prizes.

There could still be one overall winner.

Hi Jeanie,
Greg is an amazing artist, you should be very proud, I am sure of that.
So many wonderful artists, the quilt made of wood was stunning.

Thank you so much for sharing with us Jeanie, and thank you for your visit and kind thoughts.
blessings,
Penny

Thanks for sharing your visit to the Art Prize exhibits
Greetings, RW & SK

Hi Jeanie,
Thanks for your recent visit. I always become sad when I read the intro About Gypsy! How long has he been gone?
Big bisous to you,
Kirsten

wow, what artistry! Yes, how could one choose the best?

What a wonderful show. Congrats to Greg. I love the Christmas Quilt with it's bursts of colour. Gorgeous. I just read your post before this one and it makes me realize how we have to stop and enjoy our days. Fill them with people and things we love. Beautiful photos you shared. Hugs, Deb

Thank you for sharing this with us. I wish I could have seen it all in person. Such variety.

You definitely should be very proud of Greg - his work of art was beautiful. Thanks for sharing some of the other exhibits. It's so tough to pick a favorite, but that flower was so beautiful and I also loved the angel. I bet it was amazing to see it in person!