So, it's time for a post and I'm on the fence, because the ones I want to write I don't have time to do the way I want and frankly, I haven't had a real exciting life lately! 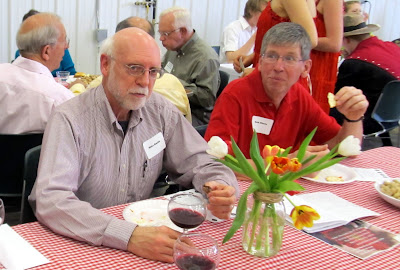 So, what's up? Not much! I am working and exhausted at the end of the day. But I did get out to my first outing a couple of weeks ago, with Rick, my friends Mike, Kate and Richard. The event supported our Summer Circle Free theatre and Richard had to pose with the 50/50 ticket sellers! 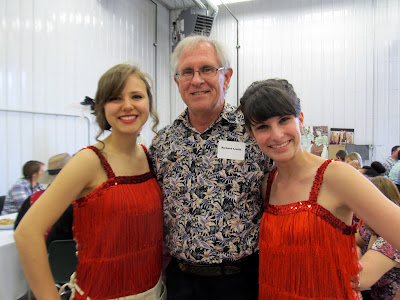 It was a great event -- held in the scene shop as a country picnic. There were plenty of actors, some scenes from upcoming plays and string band dancing, along with a great silent auction. 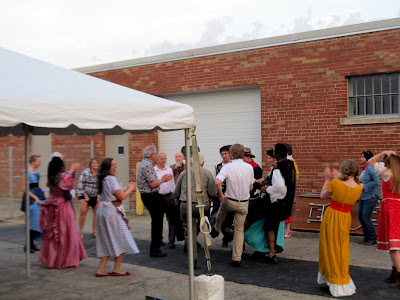 I didn't last as long as I wanted and just couldn't dance, between the shingles head and just being exhausted. As you can see, I'm not at my best. 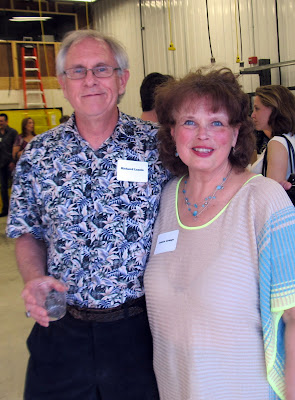 But it was good to get out! Since then I've been able to enjoy some time with friends. Wears me out but is good for the soul. When I need a break and the Purr Therapist isn't otherwise occupied, I'm allowed a cuddle or two! 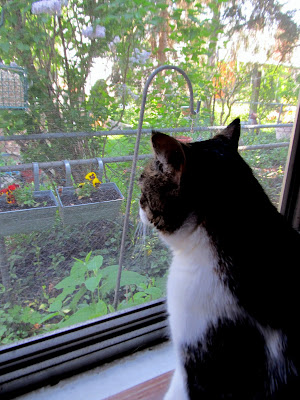 One such event was getting garden plants at the nursery with Kate. 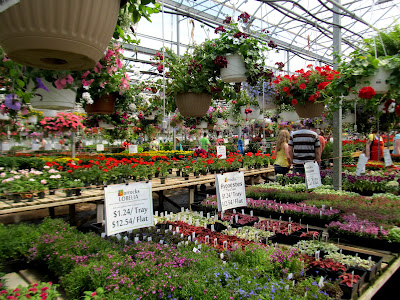 I bought a lot of these, which I love. 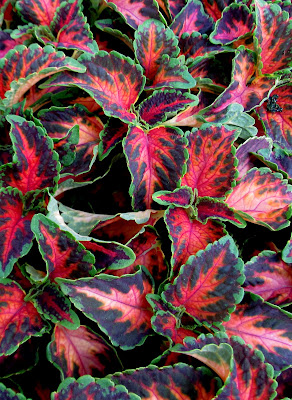 In fact, I liked them so much, I couldn't stop photographing them! 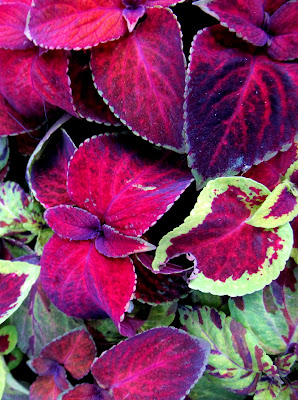 And quite the cart full. I hope I have it in me to get these planted! 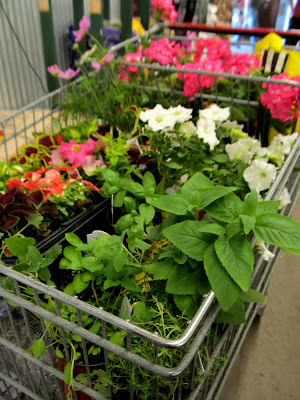 Meanwhile, Baker Rick continues honing his craft. His latest was a loaf bigger than his head. 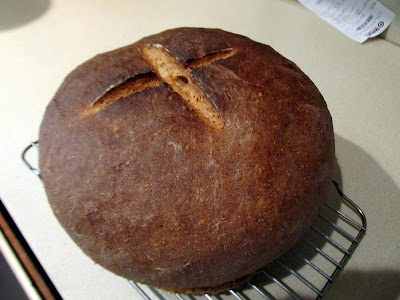 (He's also fighting the grub war, but that's another post!)

Another post in the works visits my "moodling" workshop with Kari McKnight Holbrook. Since I didn't finish my projects in class (and haven't yet) I'm waiting for that to post on that one! 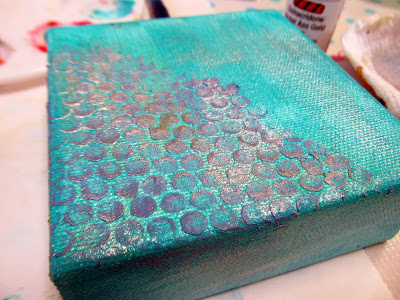 So on that note, I'll end this dull little update and promise something new very soon!
Posted by Jeanie at 8:29 AM

Email ThisBlogThis!Share to TwitterShare to FacebookShare to Pinterest
Labels: friends

I am so glad you are able to be out and about! The theatre evening sounds like fun.

I love coleus, too. It comes in so many colors and shapes and sizes!

It's always nice to "chat" with you. We got away last weekend, and Bob joined us, but haven't had a chance to get that post done- or any of the others I want to do. All in good time:). Glad you're out and about, at least!

Nice post..... I'm not blogging much these days either and I don't have your great excuses! Love the coleus! I need to go get some! Keep healing! Enjoy the little things.

Not dull at all. We're just glad to hear from you. That bread is beautiful and so are you. Glad you're getting to see people. I know you have so many who care about you.

I feel the same way when people ask me what's new... Life is pretty monotonous for me, but so it goes. I guess we all have to have these less exciting/tough seasons of life to appreciate the great ones even more. I hope that you continue to heal, but am glad that you were able to get out for a bit to see family and friends. I can't imagine how worn out you must feel. But while you may not be feeling your best, I still think you look beautiful in that photo.

Jeanie I love your plants... I know what you mean about working a lot and being so tired at the end of the day. I can totally relate...

Like others, I am so glad you are doing well enough to get out some....and what lovely things you have been doing. You also look very lovely. I hope things go well getting your flowers planted. I bet you can get some help. :)
Keep getting those kitty hugs.

Beautiful flowers. So it's gardening you've done and I'm sure many more tasks that you've lost count of... and you look great. Keep up the spring spirit, Jeanie!

Your blog is never dull! I like seeing what you've been doing even if you don't think it's exciting. The plants look beautiful as does that loaf of bread!

It's good you have the energy to get out a bit and to blog at all. I'm glad to hear you made it to Kari's workshop.

good to hear you are getting out and kicking up your heels a bit!

Your life doesn't look dull at all, Jeanie! Getting out and seeing friends, freshly baked bread, new plants, a Purr Therapist -- it all sounds and looks wonderful! I love that designation, by the way: Purr Therapist! So true!

I am so with you on not having the time to write the posts I want to write! But your like looks pretty swell to me. Love those plants, and your Purr Therapist looks purrfect for what ails anyone.

I swear - if you keep posting pics of Rick and his bread, I'm going to have to dust off my recipes and give it a go. (Although, as I mentioned, bread isn't the best thing for me just now. Next to ice cream, hot, homemade bread with butter is about the best thing in the world. Love those carbs!)

It's nice seeing Mike, too. The next time you see him, tell him at least one of his readers misses his posts. I suppose I ought to get over there and see if he's resumed his blog. The last time I was there, it had been a while.

I hope you have all three days off this weekend. I do, and with a new post up tonight, I can .... get started on my next one! No big plans, but I am going to get my pruning and such done. Everything on my balcony is growing so fast it's turning into a jungle!

Happy Memorial Day - and I must say, your smile looks just fine in that photo!

Hi Jeanie,
Sounds like such fun! Wishing you a beautiful weekend.
Bebe says thank you for the visit
Take care, get your rest.
fondly,
Penny

I am happy you could get out and about a little. The artwork does look beautiful already, so I will anticipate the finished product. Love coleus and garden plants this time of year. Good luck with the planting. Take baby steps a little at a time and you will get there.

Glad you're able to be out and about with friends, Jeanie. By the looks of your cart, you were dreaming big that day! Hugs to you my friend.

It is lovely that you got out to enjoy some blooms and to take photos and share them with us...
I think it's important to note all that you ARE doing and be gentle with yourself while you heal dear Jeanie
Your pretty smile lights up every space!
oxo

Oh Jeanie,
Your sweet words this morning have made my day.. Thank you so much for your visit and kind words about Chester.. I really enjoyed this one.
fondly,
Penny

Anonymous said...
This comment has been removed by a blog administrator.
Monday, May 27, 2013

Hi Jeanie! Oh, You look cute and glad you were able to get out some! Dull? No way! Thanks so much for popping in to see me and our kindness.
Be a sweetie,
Shelia ;0

Jeanie, I have been away from my computer for a while so I have only just caught up with your blog over the last couple of weeks. I am glad to see it so full of fun things. I know you must be feeling slightly strange but it's lovely for us to hear about your activities and see your photos and thank you for them! :)

BUT!!! You were out. Baby steps will get you there. Your garden trip was an inspiration. Lots of pretties to enjoy.