I'm trying to catch up with things past in my life. This time it's Cork Poppers take on cooking with wine. 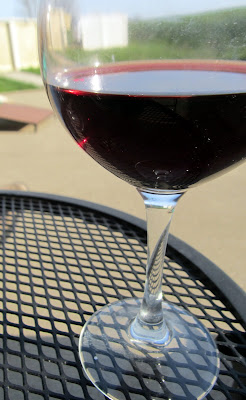 Our challenge was to bring wine to the party along with our dish to pass. The wine had to connect with the dish, which is most cases meant cooking with it. 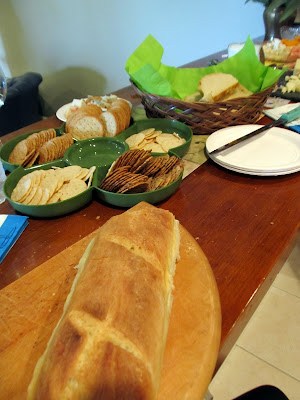 It was a good challenge and the results didn't disappoint, starting with the cheeses from Dick, Cheryl and Pat and the bread from Baker Rick. Dick said the cheese had claret or port in it, so he brought a bottle of claret to share. 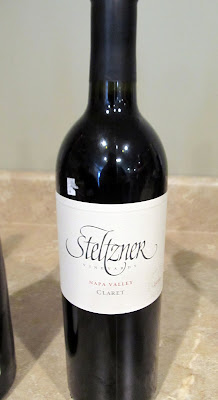 The Seltzner Napa Valley Claret 2010 was a blend of Cabernet Sauvignon, Cabernet Franc and Merlot grapes. It was tart, spicy and very dry. We all agreed it had a remarkable fragrance. I'd wear it as cologne -- at $17, it costs less than most cologne!

Barb's dish was a Caesar Salad and the wine she used in her dressing ended up being my favorite of the tasting -- and I'm not by nature a white-drinker. 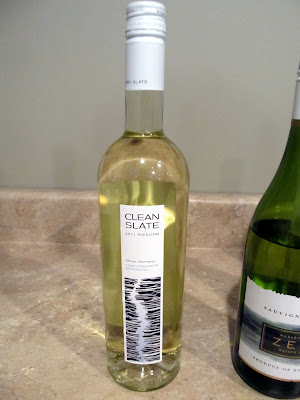 It was a Clean Slate Riesling 2011, a German wine. Dry and light it was very refreshing. It smelled lovely and a little fruity but not sweet. Of particular interest is that it had a surprisingly low alcohol content -- 10.5 percent -- which may mean one could drink a little more! And at a $10 price (Barb got it on sale for $8) it is an excellent bargain. And mighty good in salad dressing!

Can you buy a wine by it's label? Sometimes! And sometimes it doesn't matter, because the label is so good. 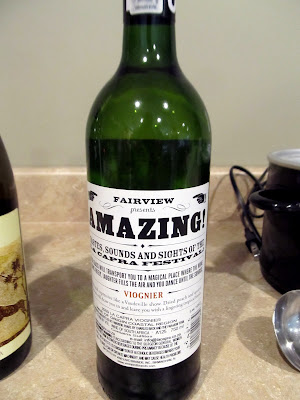 In the case of La Capra Viognier 2009 from Fairview (South Africa) you can enjoy both. The label describes this white as "bold and expressive, like a vaudeville show." While I didn't like it as well as the Clean Slate, it was still very good at $9, a good buy. 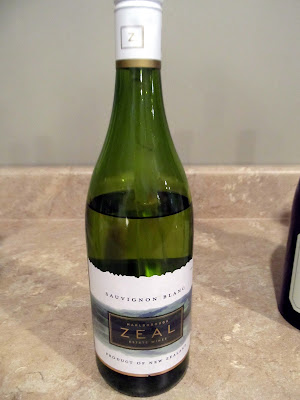 We all agreed that the aroma had a lot of grapefruit in it -- I can't usually tell too specifically and this one was no contest. Or, "Grapefruit juice with a kick," someone said. At $9.79 it was well-priced. 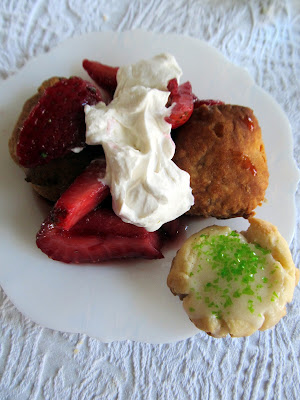 For mine, to go with dessert of marinated strawberries over puffed pastry galettes with a Lemoncello cookie, I chose Chateau du Pin, a red from the Loire Valley of France. 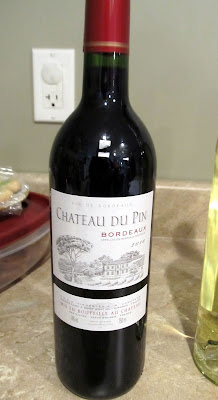 It was $9.79 and a good buy, delicious with the berries. (I've written about that at this tasting; it was the first and only (to date) wine that we tasted and immediately ordered a case to split among us.

There are three other wines to mention from this tasting, two of which were sipped and savored and one of which was used in the cooking but neither sipped nor savored. 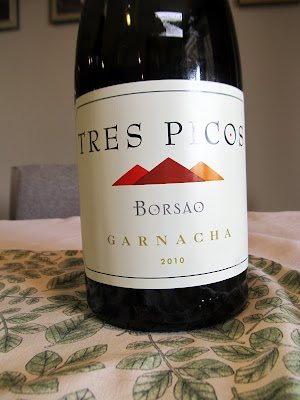 The Nisia Rueda Old Vines Verdejo 2011 was a Spanish white. It had the second-best label of the day and was very tasty. 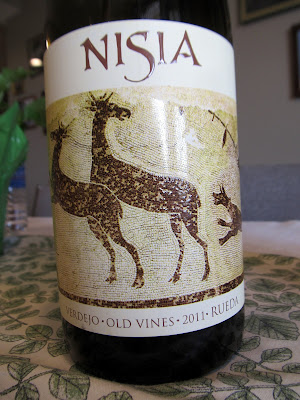 The merchant who sold the wine recommended it go with goat cheese, which was one of the cheeses on our tasting platter. It worked very well with it. It has a one-year aging potential. 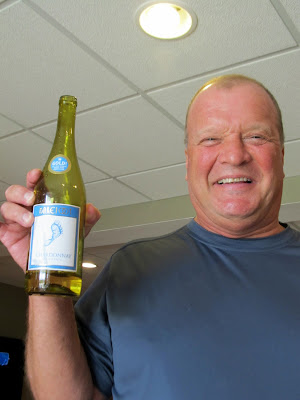 It was Barefoot Chardonnay, which he chose because it wasn't oakey and worked well in the sauce. It was $5 (on sale 2 for $10, so it might be a whopping $6 or $7 regular price). 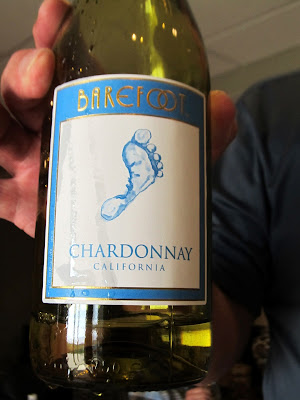 The wine is from California and was perfectly fine for the sauce and didn't even taste so bad on its own! In fact, for an inexpensive drinking and cooking wine, it was fine! 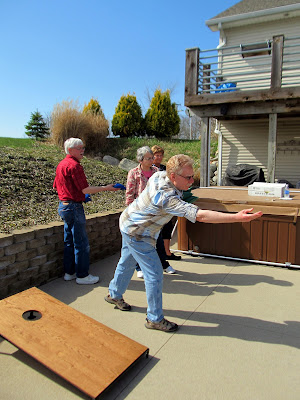 Our Cork Poppers are nothing if cheery, so after tasting some wine, we engaged in bean bag toss with nearly everyone taking a turn to the cheers of the spectators! Given the wine tasting was before, our aim in general was remarkably good! 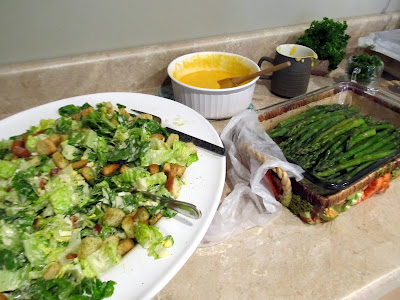 Then it was on to the dinner, where we had to admit that everyone exceeded their challenge of cooking with wine! 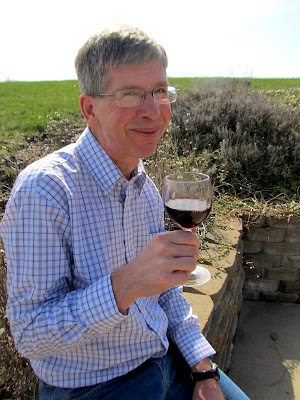 What a wonderful way to welcome spring! Cheers! (I love this photo of Rick -- he looks like he's in France, not Michigan!)

What a neat, fun time that must have been. The food and the drink sound wonderful. I rarely cook with wine, but when I do, I am amazed at the results. Wine really adds extra flavor.

I agree that Rick totally looks like he is in France in that photo! Sounds like such a fun night! I love that your group has this tradition. I would love to do that some day when I have moved back around friends.

The picture of Rick is great. Whether it is France or Michigan, he looks like one happy guy.
I am a not a big wine drinker, but I do like to cook with wine (not that it happens often, since I don't cook much these days), so I enjoyed your info about the dishes people brought.
Our friends we went to New Orleans with are big wine people.....I'm afraid I failed to fully appreciate a few really expensive bottles of wine.

What a lovely way to spend the day Jeanie - I'd be in on that too and all the better as it looks like you all enjoyed a game of petanque as well!!

Good to see a New Zealand wine on the list but I've never heard of or seen a bottle of Zeal Sav Blanc here. However Mr Google found it for me!

I always enjoy reading what good times you have with your cork poppers.

Cheers to you lovely Jeanie. Oh my goodness, this looks like so much fun. I love to cook with wine. You know how I love paper, so yes, I'd choose a bottle for a label. These are gorgeous.
Thanks for stopping by the table. I saved a macaron for you. ;) I am going to attempt making my own today. Stay tuned. ;)
xoxo's

I like cooking with wine, but really prefer enjoying a glass or two!

Your marinated strawberries and Lemoncello cookie look divine. My taste in wine has changed since I was in the hospital. I don't know why. Maybe it's the meds but I now enjoy a Riesling. I wouldn't have touched one before. It looks like you and your friends have so much fun. If I knew anything about wine (except how to drink it) I would try to find a group as friendly as yours. Cheers, sweet Jeanie!

ahhh Jeanie, what a great post!
Ricks smile is just priceless! I love it.
Wishing you a beautiful week ahead
blessings,
Penny

I am not a drinker -- wine pretty much tastes like wine to me; I have trouble telling the difference. I think I can tell red from white, but I can't go much beyond that! :-)

Italians thought I was pretty weird, having a sip from my daughter's glass, but not wanting more than that. :-)

Yes, Rick does look like he is in France in that last photo. Nice!
What a fun theme to cook with the wine you brought. I would like doing that with tea. I actually do like cooking with wine, just don't like drinking it.

Sounds like a fun time and I'm everyone had smiles! Your dessert looks so good.
Thanks so much for popping in to see me.
Be a sweetie,
Shelia ;)

hey that seems like mine....Barefoot wine??? Never heard of it. When ever I'm round we must toast on the Barefoot one...hihih.
Hope things are fine at your end of the line my friend.
Be well. Hugs Dagmar

What a fabulous time! And great information about wine and food:). Thank you! I have always wanted to learn more and figured joining a group or taking a class would be the way to go. What fun, Jeannie.

Wow - seems like a fun challenge! I love to cook and add in a little wine challenge would be neat.

once again,
i've become so incredibly hungry
while reading your post.
have you considered a career
as a food writer?
thanks for inspiring another trip
to the kitchen
and some ideas about my next trip
to Earthfare:)
-Jennifer

I'm glad to read about the Barefoot wine. There are several varities with that label around here, both reds and whites, and I've been a little reluctant to try them because of the low cost. I suppose I still carry memories of my college days and those cheap reds. ;)

It was fun to see some whites here, too. I've tried a couple of reds over the past month, and I just can't avoid those headaches. Ah, well. And I'm still such an unsophisticated thing - dessert demands a coffee, not wine. ;) But those limoncello cookies? Did you make those? Is there a recipe?

It looks like you all have a great time with these wines. I love that it includes cooking with, as well as drinking with the food that is cooked! Fun!! And a wonderful way to spend a day or evening...!

I needed to disconnect my 2600 printer from my computer
a few days ago. When reconnected, there is now a loud whistling sound made by the printer.

It still prints, but the sound is extremely infuriating.
Any tip what could induce this?