What is better than spending time with a friend? 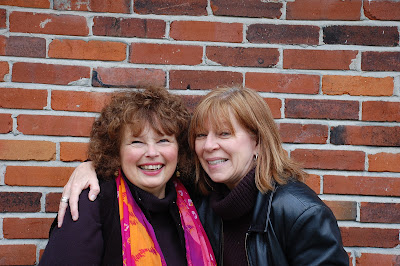 I'm sure there are a few things -- but very few. I recently took advantage of the opportunity to spend a bit of time with a blog friend in St. Louis. Unable to get more immediate flight connections after a conference, I figured I may as well take that time to connect with Diana, whose blog "The Writing Life" I have followed for several years. 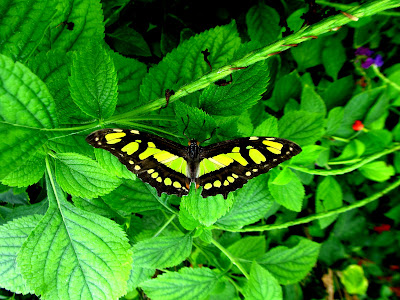 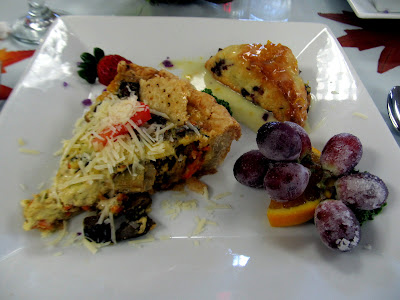 (I'm not sure which was better -- the quiche and scone or all the glorious places we visited, all decked out for the holidays!) 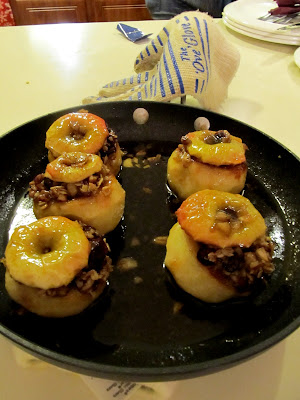 We returned home to prep dinner. One of our adventures was this to-die-for baked apple recipe from America's Test Kitchen.Then it was more talk, sharing, movie watching and just having fun! 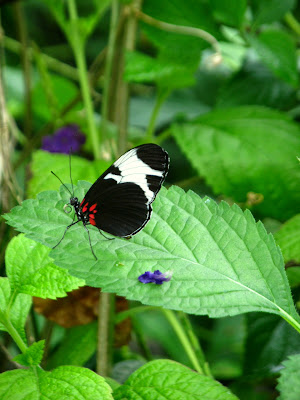 The next morning I had to leave, but before going we stopped at the Butterfly House, which was located at a county park in Chesterfield, MO, a suburb of St. Louis. It was a magical place: humid, tropical, beautiful. It was a camera fanatic's dream. 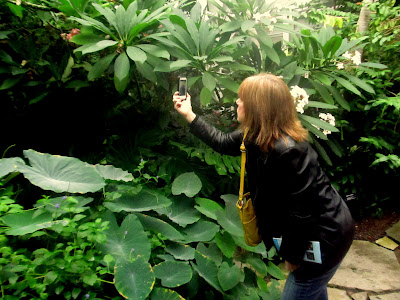 I'll let the butterflies speak for themselves, along with a quote or two that is far more eloquent than I could be. 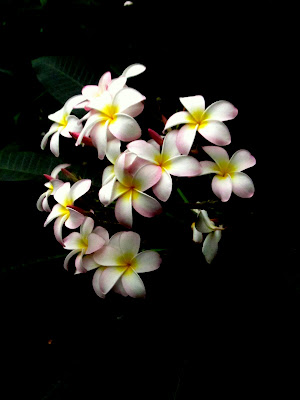 "Happiness is a butterfly, which when pursued, is always just beyond your grasp, but which, if you will sit down quietly, may alight upon you."
~Nathaniel Hawthorne 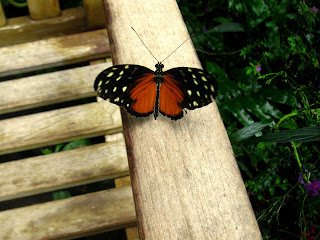 "'Just living is not enough," said the butterfly, "one must have sunshine, freedom and a little flower."
~Hans Christian Andersen 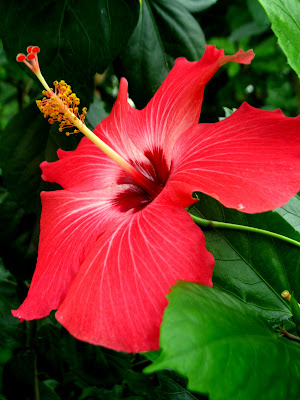 I've watched you now a full half-hour;
Self-poised upon that yellow flower
And, little Butterfly!  Indeed
I know not if you sleep or feed.
How motionless! - not frozen seas
More motionless! and then
What joy awaits you, when the breeze
Hath found you out among the trees,
And calls you forth again!
~William Wordsworth, "To a Butterfly" 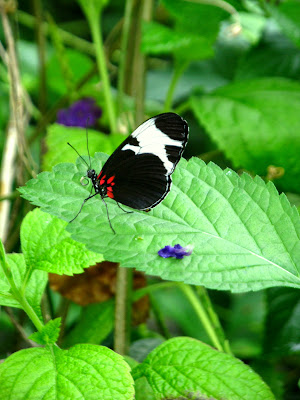 "I only ask to be free.  The butterflies are free."
~Charles Dickens 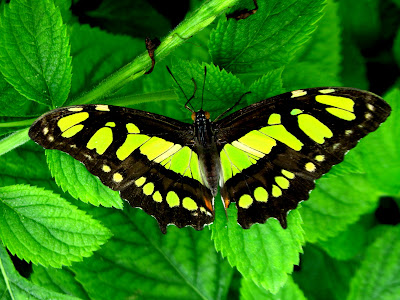 "Bees sip honey from flowers and hum their thanks when they leave.
The gaudy butterfly is sure that the flowers owe thanks to him." 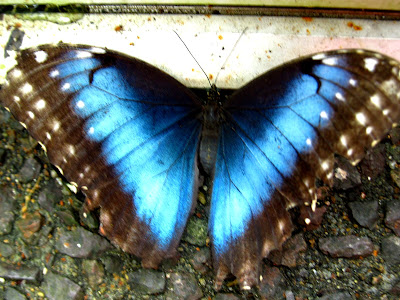 "Once I read a story about a butterfly in the subway, and today, I saw one.  It got on at 42nd, and off at 59th, where, I assume it was going to Bloomingdales to buy a hat that will turn out to be a mistake - as almost all hats are."
~Nikolaus Laszlo, Nora Ephron, and Delia Ephron, You've Got Mail 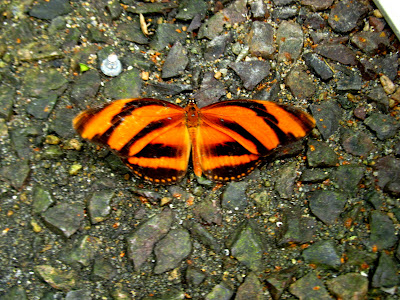 "The paired butterflies are already yellow with August
Over the grass in the West garden;
They hurt me.  I grow older."
~Li Po 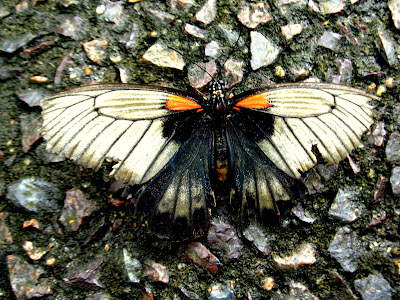 “Butterflies are not insects,' Captain John Sterling said soberly. 'They are self-propelled flowers.”
~Robert A. Heinlein, The Cat Who Walks Through Walls" 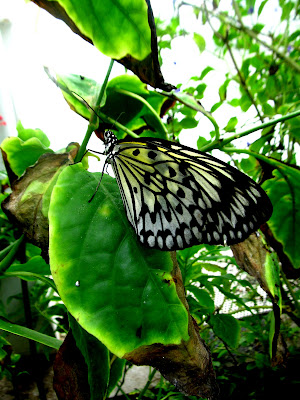 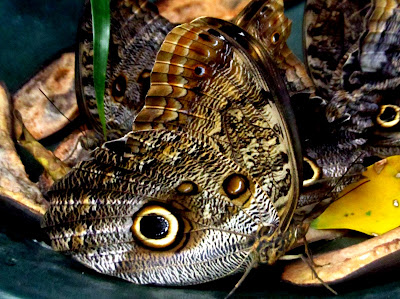 “Is it possible to become friends with a butterfly?"

"It is if you first become a part of nature. You suppress your presence as a human being, stay very still, and convince yourself that you are a tree or grass or a flower. It takes time, but once the butterfly lets its guard down, you can become friends quite naturally."
~ Haruko Murakami, 1Q84 #1 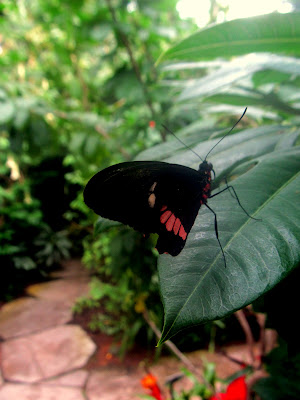 " ... I come here every day, say hello to the butterflies, and talk about things with them. When the time comes, though, they just quietly go off and disappear. I'm sure it means they've died, but I can never find their bodies. They don't leave any trace behind. It's like they've been absorbed by the air. They're dainty little creatures that hardly exist at all: they come out of nowhere, search quietly for a few, limited things, and disappear into nothingness again, perhaps to some other world.”
― Haruki Murakami, 1Q84, #1 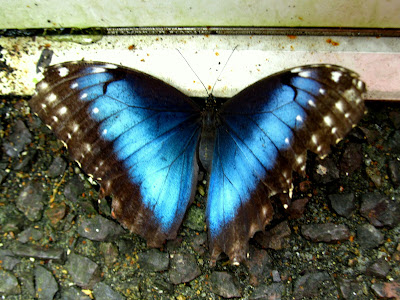 Butterflies included in this post were the The Malachite, Owl Butterfly, The Postman, The Common Blue Morpho, Orange Tiger, Small Postman Red Rim and a few others not on the flyer!
Posted by Jeanie at 11:52 AM

What amazing photographs - I wish it was summer already! And delightful to meet a friend. I'm glad you had this opportunity!

You "captured" some fabulous butterflies, Jeanie. That baked apple looks sinful. I eat at least 1 apple a day, but yours looks more appealing.

beautiful !!! and just seven years ago WE LIVED in chesterfield....i miss that place terribly !!

We have a Butterfly Pavilion here and I love to go there with the kids, but now I may have to go by myself sometime to enjoy it in a different way. I am so glad you got to have such a good time with a blog friend.

I am so glad you got to spend some time with Diana and Mr. Corleone, as I refer to her husband. ;) They are a fantastic pair and such wonderful hosts!!

I love all the butterfly pics and quotes!!

Mmmm, the food looks gorgeous and delicious, and the butterflies are beautiful. I love the Hans Christian Andersen quote.

What a fun interlude. A what beautiful photos!

I love your quotes!

Not are if I love the most, the butterfly images or the quotes.
How lovely to be able to spend time with a blogging buddy, one day we'll do that for sure!

Beautiful butterflies, beautiful quotes. Self-propelled flowers just struck me as very special to imagine. Yes, they are that. What a lovely visit with a friend.

Jeanie, you know my complete obsession with butterflies, so what a treat for me!!!!!!
Now, I was drooling over my computer with these food shots. OMG, that quiche looks yummy!

Amazing photos, Jeanie! I know it's a whole field of knowledge and photography regarding butterfies. Glad that you can share the exp. with Oh (Diana). And thanks for sharing with us in turn. That's what blogging is all about. ;)

Beautiful pictures! What fun you two must've had! Always great to meet our blogging buddies!

Oh, WOW... wow... these butterflies! I just love butterflies, so I'm in awe! And so glad you got to meet your long-time blog-friend Diane! It's always special to meet for real. I've had the happiness of meeting to blog-friends in person. It was great fun! Thank you for taking us along, Jeanie! :o) Happy Days ((HUGS))

What fun that you got to spend some time with Diana! It sounds like it was oodles of fun - with some very good food to go along with it all!

The butterfly photos are marvelous. I'm especially taken with the one that has the yellow-green spots on its wings. It's unusual - I can't remember ever seeing one like it.

We have marvelous butterfly "establishments" both in Galveston and Houston. I'm sure I've been to the one in Galveston, but really can't remember if it's the same as the rainforest pyramid or not. In any event, I need to get to both of them, and maybe even put my camera to use. I keep muttering about learning how to really use the thing - maybe that would be a good project for starting.

Hope you're feeling fine and are well into your holiday preps. It's just about time for the cat carols - and you have a new kitty to introduce to them this year!

A butterfly house. Wow. Love the red, white, and black one.

How peaceful this post was, to read and look at the beautiful pix! Thanks! I needed this.

What amazing butterflies, and also amazing photographs. I never get tired of looking at butterflies in real life but rarely manage to catch them with my camera. Think I am just too slow!

what a refreshing treat to see
all these bright and colorful
splashes of freedom
and deliciousness!
my heart just took a little
run around the room:)
thank you, thank you,
Jennifer

How wonderful you could have meet up with a blog friend. It happend to me two years ago and it was a delight.
I can tell you had a ball. Hugs Dagmar

So pretty - and a lovely visit with a blogging friend as well! Sounds like such fun.