Cork Poppers and Wines of France

While we're taking a break from our trip posting for some home-town posts, I thought I'd share some of the notes from our recent Cork Poppers wine tasting. 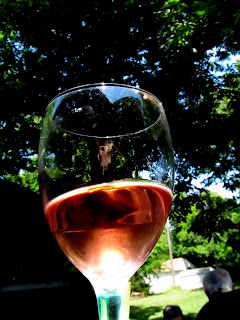 The theme was France. Party favors included a magnetic pad with the menu on it ($1 from Michael's) and magnets made with wine corks. Our place cards had a different photo from Paris for each guest. 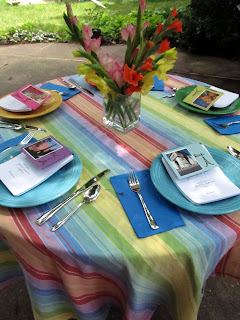 Our gathering was on Rick's patio. For flowers, I bought several bunches of gladiolas for $2.99. When Rick saw him, he asked, "What are you doing with the funeral flowers?" But cut down to a more reasonable size, they made colorful and charming arrangements. 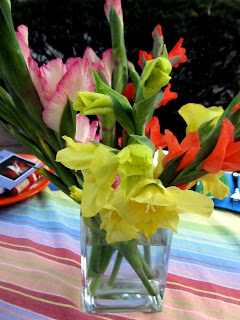 With a terrific cheese-and-bread platter, courtesy of Pat and Meredith, we began tasting. Our first wine was Domaine Seguinot-Beulet Chablis, 2009. This is made from 100 percent Chardonnay grapes from Burgundy, France, and the wines were NOT aged in oak (which I prefer). 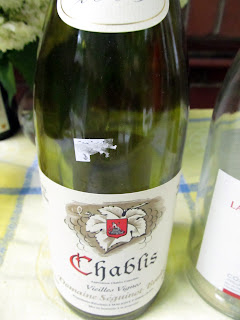 It was absolutely delicious. Menu suggestions included seafood, soft cheese, lemon tarragon chicken and chicken piccata. Rick summed it up best when he said, "Why don't we just drink this?" 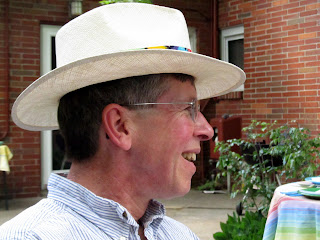 Good in theory. At $20/bottle, perhaps less good in execution.Our wine guide, Dick, said chablis is generally more expensive because it is is from a smaller region. I agreed with Barb, who said, "This is fabulous!

Next up, Louis Jadot Macon Villages 2010. This is a 100 percent Chardonnay from Burgundy and no oak was used in the processing. 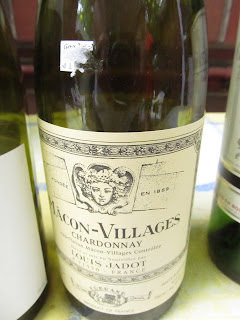 It was more tart than the first and Cheryl noted it had a cleaner finish. The AOC classification means it is not of highest caliber but a step above the basics. Someone (probably Barb!) called it "another reason to drink white." But, at $15, it was less expensive than the Chablis.

The Chateau La Tour de Beraud, Rose 2011, was received with mixed ratings. Some said it was lacking in flavor. Others said, "Oh, you have to get this, it's really good. 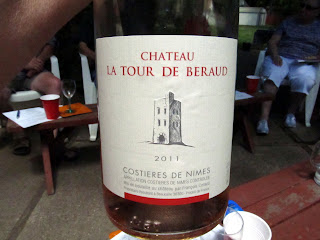 At $9, not a bad price. But I think at the end of the day this was the least favorite of everyone.

We switched to reds with Georges Duboeuf Beaujolais Brouilly 2009, from Burgundy. 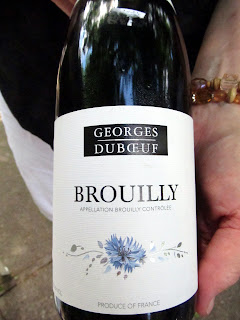 Deboeuf is a nagotiant meaning he collects the grapes and juice and does not have his own vineyard. We were advised to "drink it you." I found it really tasty and very nice, but if left to sit too long, it would turn to vinegar. $14.50 is a lot to pay for wine-to-vinegar, so bear that in mind! 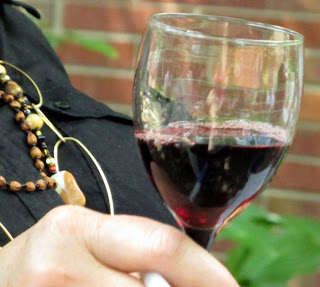 I didn't get the price on Chateau Du Ragon Bordeaux, 2009, another AOC-classified red. Rick said it was "more in your face" than the Duboeuf and I have notes that it "surprised me" and "This was my favorite. 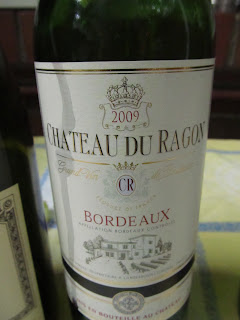 The last red we enjoyed was Chateau La Raze Beauvallet, 2009. This AOC region is from the Medoc region (and I DO like Medoc, which is a small region in Bordeaux! When we were in France, we probably drank Medoc more than any other "type" of wine.) 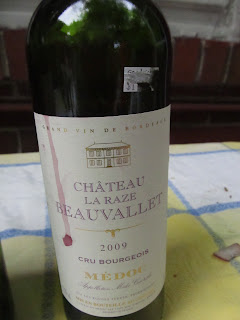 At $12, it is a very good value with a nice finish. Dick advised us that it should be consumed within five years, and that doesn't seem to be a problem!

Then it was time for dinner! Rick grilled yakotori, a chicken/scallion-on-skewers dish, with the chicken marinated overnight in a soy-mirin mixture. 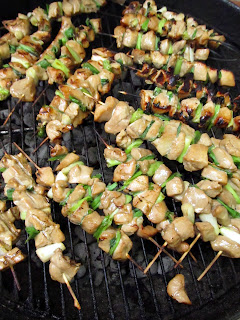 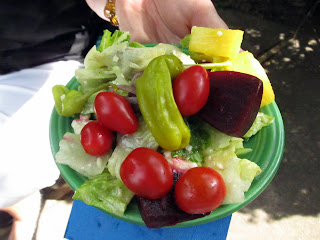 Cheryl's dessert was light as a feather, and a perfect way to end a summer meal. 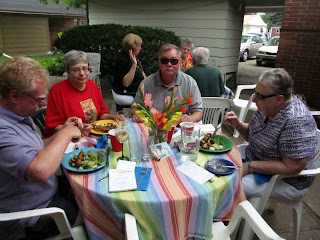 And I'm happy to say no one left the table any less than happy!
Finally, for a splendid photo of a vineyard in Provence, visit Esme's Words and Peace HERE.I recently discovered her beautiful blog!

And, if you are fond of wine and new to The Marmelade Gypsy, check the labels on the sidebar under "Cork Poppers" or "Wine." You'll find posts featuring wines from around the world -- and a lot of crazy people who love to try it!
Posted by Jeanie at 10:55 AM

This looks like great fun. What could be better than enjoying food and wine with friends? Love the flowers and tablecloth.

I love these posts, but I always want a glass of wine after reading them :)

HaHa. You always have so much fun when you get together with your wine tasting buddies. I get lots of vicarious kicks with the reports. :-)

Oh fun! These Cork Popper get togethers sound so fun. I love the use of photos for place cards. Maybe I will have to get organized this year and do that for my Julia Child night!! :)

Thanks for the shout out. But you know, my name is simply Emma, and actually the link you put to my blog does not work, I bet because you included a space in the link? Thanks for this great post, very tempting!

Lovely looking wines, but my attention also is drawn to that simply beautiful table cloth!

What a lovely evening and fun for you to feature wines from France.
Now I wonder a bit about some bottles we have had for way more than 5 years.

My only real experience with wine tasting was with French wines when I was officially a bit too young to drink. My Mam and a family friend used to go across to France on the ferry and bring it back by the case load, then they'd allow us to have some. Not loads (my brother and I were both under age) but enough for us. They said they figured it was better for us to drink with them than to go off and do it on our own like mostpeople our age were. Anyway, I don't remember what ones I tried to be honest... It was like 13 years ago! Funny thing is, now that I am old enough to legally drink, I don't, LOL!

As always, I enjoyed you wine tasting party. Love the idea of cutting down gladioli.

Though I don't drink wine I still enjoy your adventures and gatherings with wine. The chicken and salad looked delicious. The French picture of the grapes reminded me of our trip to France, where I had to walk over and pick a grape just to taste - delicious!

I wonder, is this a 'tasting', i.e. slurping and spitting, or drinking, i.e. swallowing.?

If the latter I expect you were all rather merry at the end of the evening. (I'd certainly have swallowed)

This sounds like a perfectly delightful evening. You both do a great job of putting together the perfect wine tasting event. I will have to look for some of these wines.

oh how you live:)
it's a beautiful thing.
-Jennifer

I laughed when I read Rick's comment about "funeral flowers". That surely was true in my experience - and still is. If you go to a funeral, there are going to be glads there - I've always thought it was because they're big flowers and looks good at the front of a big room. ;)

I suddenly became curious while reading this - have you ever done an evening of Texas wines? There are some really splendid ones - here's the link to Llano Estacado winery . I see they don't ship to Michigan - whether that means you can't find it in your stores, I'm not sure.

If you ever were inclined, I could do some research and ship some to you if there wasn't any other way to get it. There are several wineries, too: Fall Creek, Stone House and Flat Creek Estate have pretty good reputations. You can see the Hill Country wine trail here.