The Cork Poppers overdid it a little bit this weekend -- it was a Pinot-Palooza, and there were nine wines to savor. Savor we did! 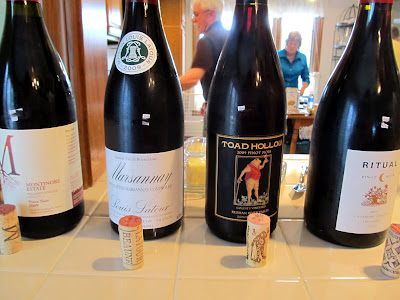 We started with the Pinot Gris/Grigio wines, all whites, all relatively light. All the Pinot Grigios seem to work well with seafood, salads, light meats or as good sipping wines on a hot day and should be served very cold, although we noted that in some cases, as they warm a bit, the complexity is enhanced. 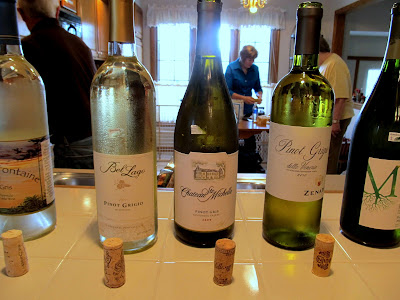 The first, Chateau Fontaine 2011 Pinot Gris is from Leelanau Peninsula and Northern Michigan. Although the color was described as pale yellow, to me it was more like slightly tinted water. Michigan's whites are better than their reds and this had a "nice nose," we decided. It had apple overtones and a great label. At $12, it wasn't a bad price. 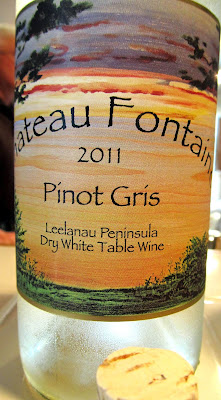 Then we had Chateau Ste. Michelle Pinot Gris 2009 from the Columbia Valley in Washington. That was $12, too -- a little darker, not so peppery and spicy as the Chateau Fontaine. This seemed to have a good deal in its favorite and remained one of the favorites. 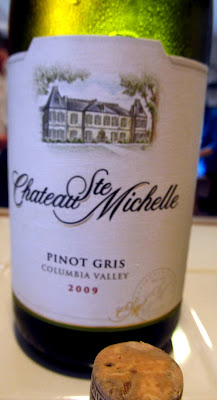 The third was Montinore Estate Pinot Gris, 2009, from the Willamette Valley in Oregon. It was unoaked (I prefer unoaked wines) and certified organic grapes. I enjoyed this -- it was a little spicer than the second wine we had, not so much as the first. But at $15.50, I'm not sure it could top our $12 number 2. 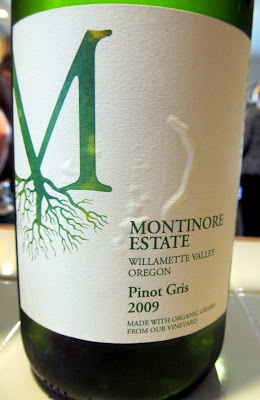 Then we were in Italy for Zenato, Pinot Grigio delle Venezie from Veneto Italy. This was another stainless steel ferementation, aging six months in stainless tanks, and more in the bottle. It was quite acidic and very tasty at $12.99.

The Bel Lago Pinot Grigio, 2009, was also from the Leelanau Peninsula. It was very pale and spicy. Our guide Dick said something about filtering out dead yeast cells which were great for making bread, but my notes are sketchy. It was $14. 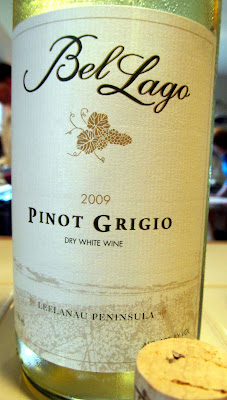 Everyone tastes differently and has their own favorites. For me, it was the Chateau Ste. Michelle, the Montinore, the Chateau Fontaine, Bel Lago and finally the Zenato. 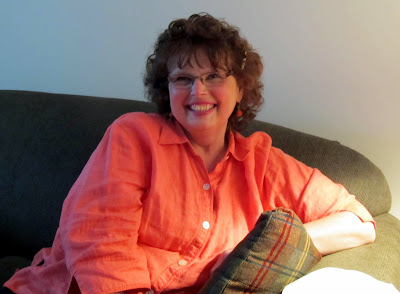 On to the reds! I'm more of a red woman, but have never been as fond of the Pinots as the more fuller bodied wines. I was pleased to say that these did not disappoint and perhaps even made a convert! 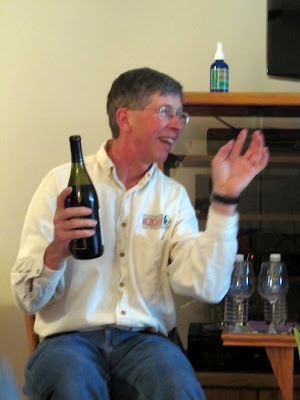 Our first was another Montinore Estate Pinot Noir 2009, again from the Willamette Valley, Oregon and certified organic. I wrote "Smells awesome," Rick said, "Smells like my cough medine, I love it," and Roger said "Tastes like rubber." I didn't think so -- I liked it a lot, but at $19.50, I'll probably give it a pass. 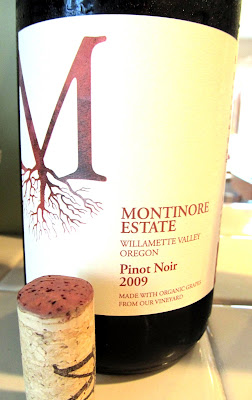 We pretty much all agreed on Toad Hollow Pinot Noir, 2009, both for its label and its taste. Our wine guide, Dick, liked it best and Roger said, "I really like this!" It was a tiny bit sweeter, although not cloyingly sweet, and filled with berry flavors with a little spice. "Quit talking about it and pour it!" Roger said. I agreed -- I really loved this one and would stop right there (and should have.) At $15.50, it was the most reasonable of the reds we tasted, and I thought the best. 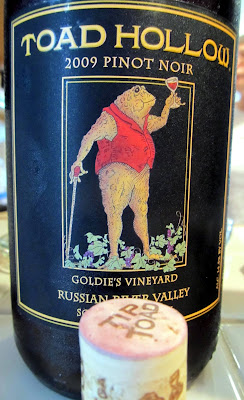 Ritual Pinot Noir 2009 from Casablanca Valley in Chile was next. It was very dark and the closest to the dry reds of those we tasted. Barb called it "very tasty" and it was a little more fruity than some. I have a note that says "Best so far" but I'm not sure if that was me thinking it (whatever happened to the previous Toad Hollow?!) or if that was someone else, but either way, it was good. The price: $18.50. 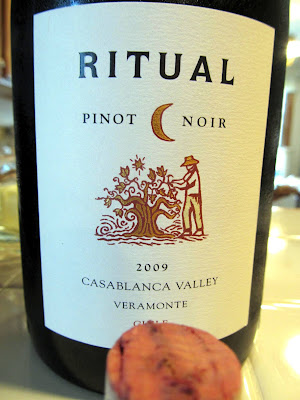 The final wine we had was Marsannay Pinot Noir 2009, and it got a mixed review. It is from Maison Louis Latour, the negotiant, from Burgundy, France. The negotiant buys the grapes and/or juice but doesn't grow the fruit. Then he has someone make the blend. Pat and I really liked this and Clayton called it "Pretty perfect with exceptional flavor. I liked it better than the Ritual. This bottle was $18.00. 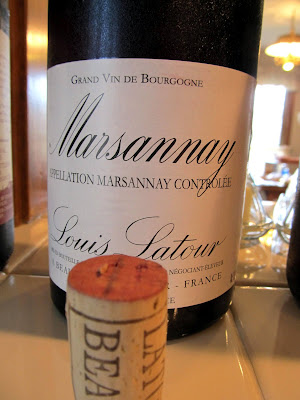 A few notes -- The Pinot Grigio wines will vary from area to area. Those from Alsace region of
France tend to be fuller bodied and sweeter, while Italian Pinot Grigios are often paler in color than others. Italian pinots are generally fermented in stainless steel. In Oregon, they barrel age the wine after its initial stainless steel fermentation, giving the wine more flavor interest while keeping the fruit and acidity. 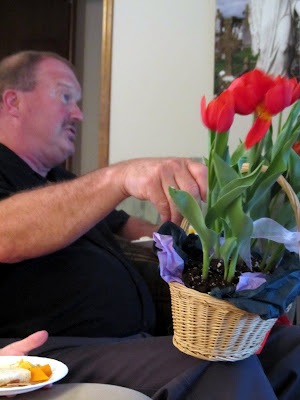 I couldn't do a Cork Popper post without mentioning our good company (this group got a little out of control and eventually we had to launch the "talking tulips" -- the person holding the tulips had the floor!) 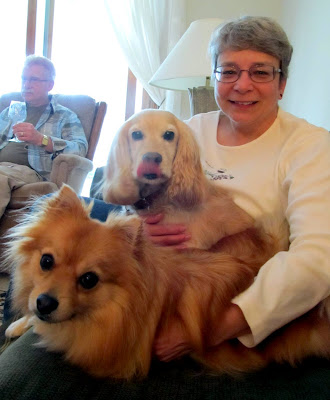 Our hostess, Cheryl, and her assistants Taxi and Trolley, pulled together a beautiful table with raku fortune cookie favors! 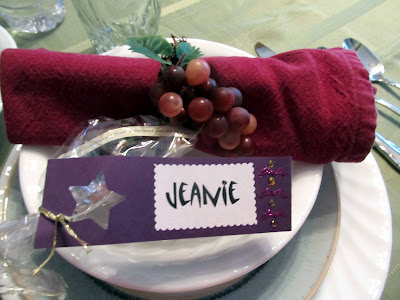 Our dinner -- delicious as always -- included hearty chiles, corn bread, salad and ice wine, truffles and brownies for dessert. And we never would have made it to dinner without Pat's cheese and bread selections for the tasting! 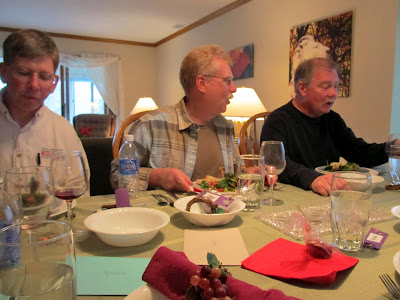 We left the table, satiated and filled with the warmth of friendship (and more than a bit of glow from the wine!), grateful for the good company we shared.
Posted by Jeanie at 10:07 AM

Taxi didn't mean to stick her tongue out at you in the photo--she was just hoping to share in the some of the delicious food everyone brought! Thanks to the whole group for making it easy to throw a thoroughly delightful party!

I know I always say the same thing about these gatherings, but, gosh, this looks like so much fun. As soon as I'm off my NSAIDs, these wines are at the top of my list!

You all have the best times! Cheers! I LOVE the one with the toad! (But I can't drink wine!!!)

I'm glad you showed us so many of the labels....they are a treat to see in themselves. It does look like it was a delightful time.

What a fun tradition you have. This weekend I was at a tea tasting, which always reminds me of what you must share in wine tasting. They are grown very similarly.

Wow, those place settings are gorgeous! I love that you have this fun group that gets together like this. I hope to do something like that some day when people are a bit more settled (i.e. don't have young kids). I love Pinot Grigio and Pinot Noir. Those are two of my favorite blends. I really like Chateau St. Michelle so I'll have to try their pinot grigio!

This was so fun to read about. You gave us lot of good information. I am not allowed red wines at this point in life. They evidently can trigger heart episodes with arrhythmia. So says my doc. Good thing I prefer white wines, and I especially like the Pinots.

Great picture of you! Love it.

I love the wine labels and am intrigued by the idea of raku fortune cookies. Thanks for bringing me along to your party.

Trolley looks like a younger version of my dad's dog Tuffy. Those gatherings look like fun, sometimes I wish that I liked wine! Never did develop the tast for it though.

Wow! Sounds like you all had a wonderful dinner. Enjoyed your post. Good info on the wines. I like a sweet white wine once in awhile with popcorn! LOL!
Have a great week!

Pinot-Palooza...this was such fun, Jeanie! Thanks for inviting us in! I've come to enjoy Pinots more too. I used to be all white wine, but I really love the range of reds now. We so need a wine club in our town. ;o) Happy Days ((HUGS))

Dear Jeanie
What fun you had wine tasting - there's nothing nicer!

I'm a Pinot Gris fan in the Summer but I really appreciate a full bodied Chardonnay at lunchtime during the Winter months.

We drink a lot of Pinot Noir too - mainly with the wvening meal.
$18 sounds to me like a great price for a good Burgundy wine.
(Burgundy is where my daughter lives!).

Wishing you a happy weekend Jeanie.

I love reading about the Cork Poppers - what a great group and fun evenings you have!

I’ve never tried a Pinot Gris, so thanks for recommendations of some good ones. Will especially look out for the Michigan wines...love to support the home team :)