Life is a Beach! 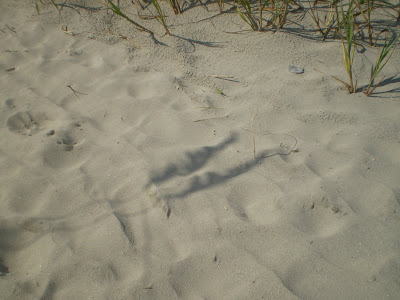 Rick may go to Myrtle Beach to work, and I go to help. But I really go to play on the beach!

It's so different from Michigan beaches, and especially those like my own little inland lake, where I see straight across the lake from my beach to the county park.

When you look straight out over the water in Myrtle, you don't see anything but water!

Because we've come here several years now, we notice changes, and one we noticed this year was a great preponderance of shells. Bigger ones, and lots more than ever before. More about that later.

Generally, one can walk out into the water and it's a reasonably sandy bottom. This time, at least when it was during high tide, the shells seemed go go on forever -- sharp, and often broken. Very unpleasant. It wasn't bad when we went at low tide. Then it was the old Myrtle I knew and far more fun to play in the ocean. 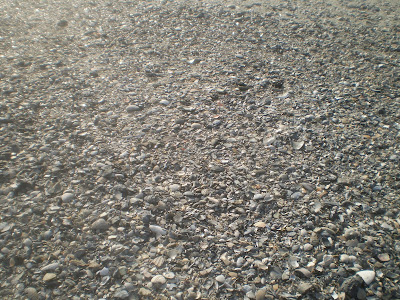 It has been much cooler than previous years, which means it is about 85 with 83 percent humidity instead of into the 90s. Nonetheless, it's thick, a little hard to breathe, and the change of temperature -- say from inside air conditioning to outdoors -- will fog your glasses in a heartbeat.

Just wading or dangling feet in a pool is cooling. This woman had the right idea! 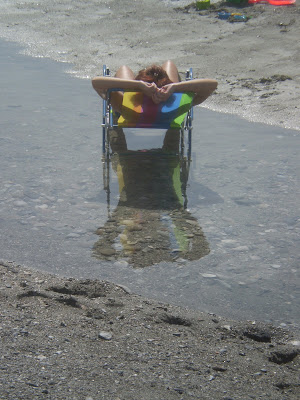 I can't describe what I love so much about this beach. Is it that it goes on for miles and miles? That the sand feels so clean -- an accomplishment, given the number of people who park their coolers, beach towels and chairs in a spot and set up camp. People clean up after themselves, everyone plays well together and it's so nice. 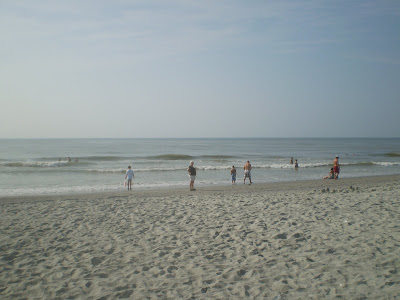 To get to the beach from our little motel, we walk across the street, beside the parking ramp and cross another street. Then we walk by the condos and cross a little bridge that leads us on a sandy path by beach grass. 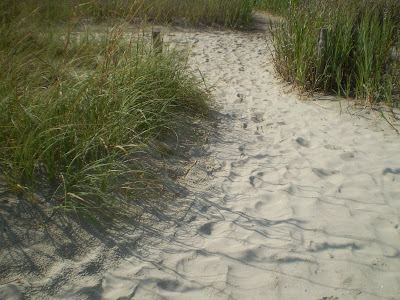 A few steps later, we're there! 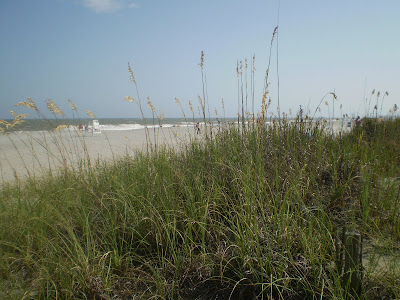 On the east, an endless expanse of water. On the west, one condo after another. 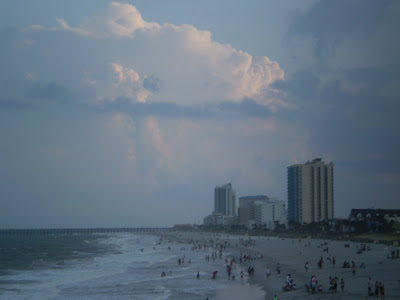 Every morning the life guards set up rows of chaise lounges , which they otherwise keep tied up in the evening. 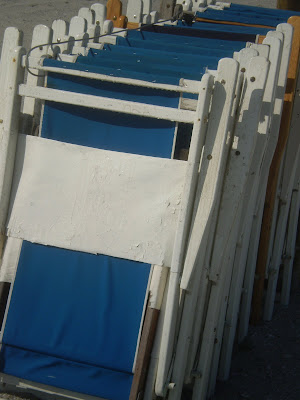 And they put up tall umbrellas, blue, green and yellow, one after another. 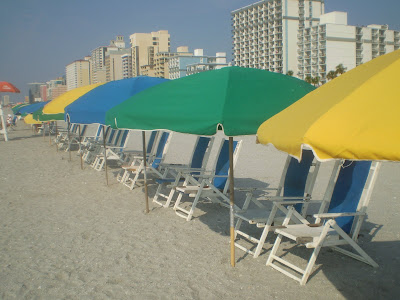 Some people bring their own! 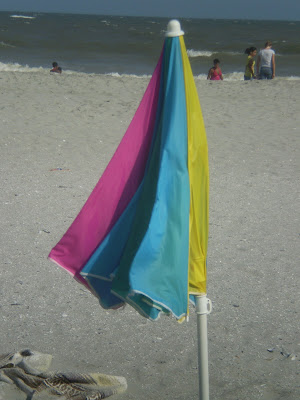 (My first purchase is always a folding beach chair from the beach store on the corner. At $14, it seems a frivolous price for something you'll buy and leave behind, but I use it throughout my stay and it's far less expensive than the rental.)

Walk the beach and you will see and hear that endless expanse of blue water, broken only by frothy whitecaps and the very occasional boat. This year the water is rougher than we've ever noticed and the beach is windy. But without that breeze, we'd all swelter. With it, we run the risk of staying out far too long.

The swimming -- once one is past the shells -- is divine. The water is so very warm, and it's wildly salty. As you dive over the waves, it fills you like an enormous neti pot. My sinuses are never so in control as they are at the beach! 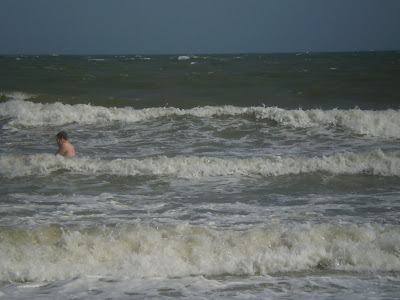 The current is strong -- it can easily take a wave jumper a quarter of a mile up the beach. And don't even try to swim upstream! It's not just challenging; it's impossible.

When the waves come -- and it's often -- they are huge and powerful. They come in large, undulating swells, building in intensity, rather like a creature drawing deep breaths, waiting to exhale in a final surge -- in this case, powerful, frothy breakers with a force so strong it can draw one into shore (or if one is already too shallow, knock them unmercifully off their feet, making it profoundly difficult to stand!) 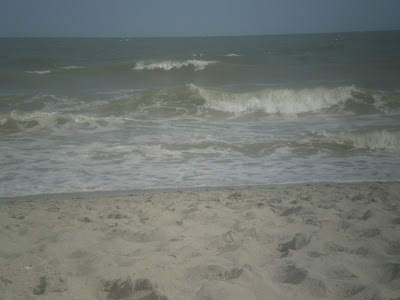 And of course we play, diving into the waves, leaping over others and riding the largest ones to shore.

I didn't know if I would hurt my healing shoulder or if it would be the best thing I could do it it. (I think it was a little bit of both.) But it was glorious.

If you read my story about the Subway girl last time, you may remember the pudgy lifeguard. The day after I saw him at the restaurant, I saw him on the beach! 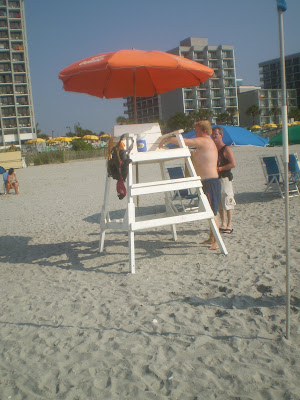 Of course, what really makes the beach fun is all the other people who are there! You'll see some of them next time!
Posted by Jeanie at 10:35 AM

I'm so glad that place holds a special place in your heart...we all need places like that !

and ohhhhhh, it looks fabulous !

ooo I can almost "hear" the crashing of the waves and smell the fresh sea air....thank you for that...I had to really laugh at your ocean/neti pot comment...I've just been telling a group of quilters about neti pots, just this am in fact, none of them seem ready to give it a try, I even sent them a video link LOL
Happy Saturday my friend!

I have just read the last three posts and will write you an email because what I want to tell you would be too long as a comment....:-))
I love your stories and pictures about Paris very much and I am very interesting in the Myrtle Beach. But first I will look for this part of the USA in a map.....
Tomorrow my grandchild from Berlin will arrive and stay absolutly alone for 1 week.....we are all very excited...
She gets six years at the end of August and begins with her school in September....
I hope to find some time between to write you!!
Happy Sunday and take care!!
Iris

If I couldn't live in the mountains, I'd be at the beach!

This sounds wonderful, and I've never been there or seen it, so now I've enjoyed it too.

I have never been to Myrtle Beach. So I will have to try it one year.
And look for that pudgy life guard.( I love your sense of humor) I also love how you describe the beach as its the way I always remember it.
xoxoxoxoxo

That stack of the blue and white beach chairs is absolutely perfect.

Very nice photos. Looks like you had a great time. Although I'm not a beach fan, I'm so glad you had a fun leisurely time. Good for the soul!!

this is such a wonderfully written post. i totally was there with you, getting knocked over but trying my best to get over the breakers. you describe the beach as though it were a place you have been all of your life. and you, a midwesterner!
XO

There is nothing like it. I love to watch the water, during the day or most especially in the evening with a moon out. Just something magical about seeing moonlight sparkling on the tops of the waves and hearing the water as it laps onto the shore. One of my favorite things in all the world.

What a wonderful picture of the umbrellas and the expectation in the folded chairs.