Paris In July is one of my favorite blog parties. Each July a group of bloggers who love Paris (and France) write about books, film, travel, food and all things French or set in France. My first offering for this event are two books set in Paris by Mark Pryor. 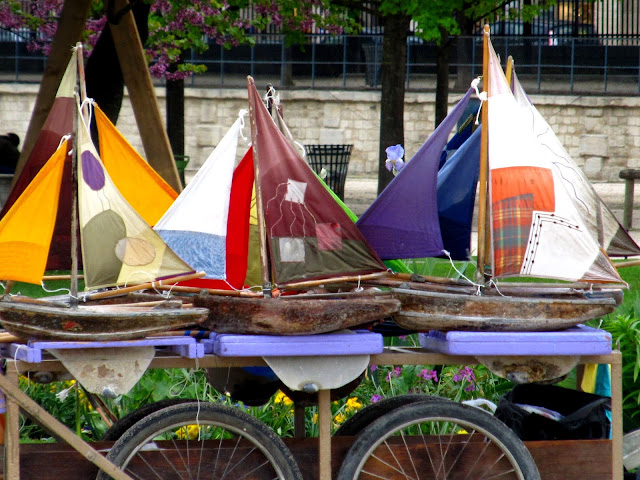 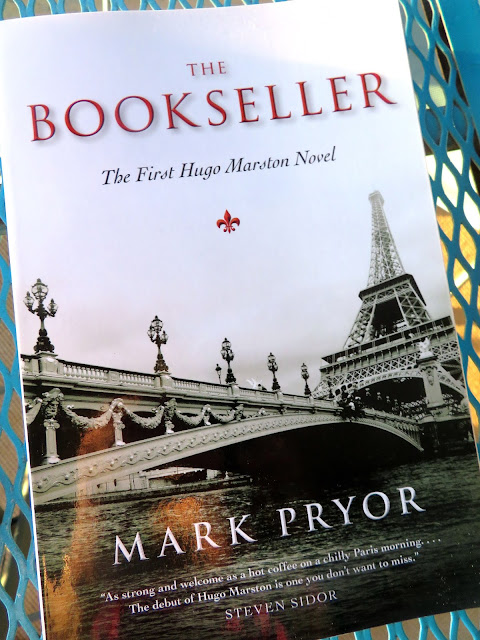 Hugo Marston, an American from Texas, is the chief of security for the American Embassy in Paris. In the first of this mystery series, his friend Max, a bouquiniste, is kidnapped at gunpoint. Hugo witnesses the event but is powerless to stop it so he makes it his mission to find the kidnapper with the help of a former CIA agent, his longtime pal Tom.

Pryor weaves a clever plot that includes Max's previous life as a Holocaust survivor and Nazi hunter, rival drug gangs, and perhaps a secret within one of the books sold on the banks of the Seine. As more booksellers disappear, their bodies are found floating in the Seine. Will he be able to solve the mystery before he becomes a target himself? 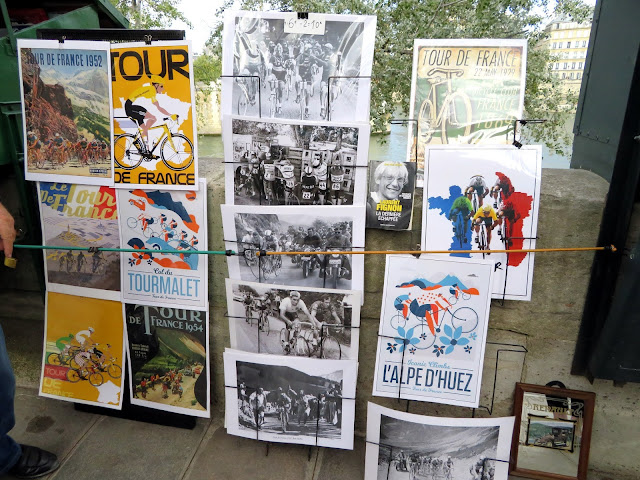 Set in setting familiar to those who love Paris, including the streets along the Seine and the Marais, it is a wonderful first entry to a series that has great potential.

While walking through the Tuileries to meet a friend for a drink, Hugo Marston hears shots and sees a lone gunman with two guns, shooting at people. Carrying his gun from the Embassy security division, he is able to shoot the man and becomes a French hero. 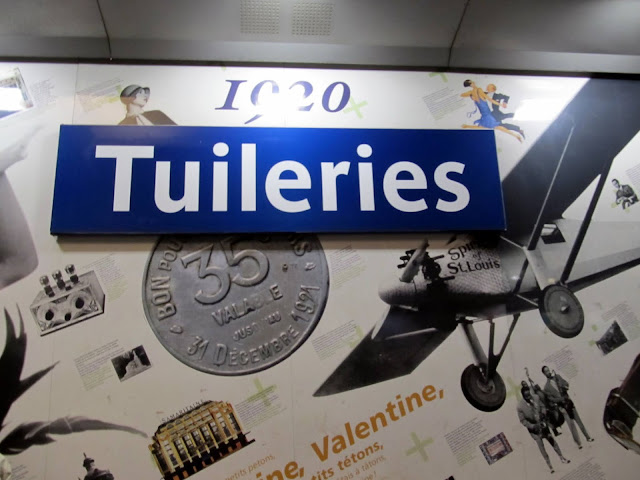 Marston is invited to a gala Bastille Day party at the home of the wealthy Lambourd family, where (we learn in a prologue by "the Killer") a murder will take place. (Think of the setting as something like Musee Jacquemart Andre, a former home, now a museum.) However, a failed murder attempt has taken place at the mansion the evening before the party when an American woman assisting with the upcoming event is found on the stairway after a tryst with one of the house residentst.

Because the victim is an American, Marston is brought into that case as well. But some view his heroic actions the day before as a staged event and in other ways he is considered a suspect in the murder of the shooter. Are the two cases connected and will Marston find the answers before he becomes a victim himself?

In this book, one of the more recent of the series, contemporary politics and conspiracy theories are cleverly woven together with a strong mystery and compelling characters to make for an intriguing adventure set in the heart of Paris.

It's no wonder "Hugo Marston" is a Texan. His creator, Mark Pryor, is the assistant District Attorney for Travis County, Texas. However, the writer, born and raised in England, was first a police reporter in Essex before moving to his mother's home town of Chapel Hill, North Carolina. He holds both journalism and law degrees.

There are ten books in the Marston series. I have read the first and the ninth. I suspect like many mystery series, it helps to read them in order but I didn't feel like I missed anything by doing so in a slipshod manner! 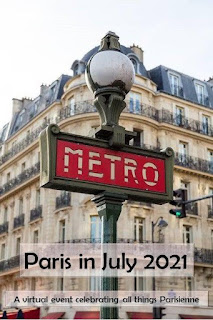 For more Paris in July post, visit Tamara at Thyme for Tea!

There is nothing like a good book!
Hubby's favourite place to travel is Paris. We aren't doing any traveling this year, though. We went about 10 years ago!

They both sound wonderful! Have a great weekend!

This sounds like a fascinating series. I've found that I love books set in France (during the pandemic). I've read from about 4 cozy mystery series in the last 18 months. This is one I need to check out on Amazon. Thnk you!

I'm googling this author/series now. It looks like something I'd like to try. Thanks for introducing me to a new series :)

Very well written reviews on the two mystery books by the american Mark Pryor!
With Paris as the setting, any action becomes intriguingly interesting and attractive.

What a fun blog party.
The series sounds good.

Sounds a good read. I used to join in, always fun Paris in July.

Good reviews ... I read the one about the bookseller last March, but I don't seem to have blogged it, I guess I was busy! Did you recommend it to me? Maybe so. Well, at least I remember the book if not the recommender.

Beautiful photos to accompany the book reviews. Now I want to read them and become immersed in Paris!

I love it when a person is enthusiastic about a topic and they spread it around like you do with Paris.

They sound great and I love all the photos you've shared today. Have a wonderful 4th of July weekend Jeanie!

Jeanie, Loving the start to our blogging celebration to Paris. I particular love how you've interwoven your reviews of stories in Paris with your own photo's and memories. I've been looking for some lighter reads, and a little mystery set in Paris cant be a bad thing.

Jeanie, I know how much you like the "Paris in July" posts every year. And you are certainly one to talk about it, as you've traveled there yourself, that's fantastic! When the girls visited Paris, they came back and said that it is a place that changes your life. I believe that's true with all the good food, pastries, art, charming cafes, and more.

Thanks so much for stopping by my blog. I'm greatly appreciating the well wishes, believe me. Have a great 4th! :)

Really enjoyed seeing your photographs.
Thanks too for the information/review on the books.

Have a good weekend.

Thanks for the book recommendations Jeanie. I haven't heard of this author or mystery series. It is always fun to find something new to read. Happy July! ANd have a great holiday weekend. Hugs-Erika

Thank you for this post!
I love mysteries in a series.

Your descriptions make me want more! I love mysteries in a series

Thank you for the post and especially for the images.

These sound like great books, thanks for sharing the photos, too. Have a great weekend, hugs, Valerie

Always grateful for your book recommendations.

Paris in July sounds wonderful. I love the mysteries and I added these books to my reading list. Mark Pryor will be a new author for me. Thanks for the reviews. Happy 4th of July weekend!

I think that my only connection to France these days is cheese, and once in a while I will buy a bottle of French wine. I have one friend to whom I speak French regularly, and when we visit my daughter in Ottawa (not for a year now thanks to COVID) we usually go across the border into Québec. Hardly France, but certainly French!

A Small Village in France said...

Thank you for the introduction.
Love the photos and your discoveries!
Enjoy these wonderful summer days

These sound like great mysteries Jeanie and your Paris in July blog party sounds so much fun for lovers of France! I love the sailboats in the opening photo! Have a wonderful 4th weekend!
Jenna

A Bookish Way of Life said...

I've never heard of these books - thanks for posting about them :) They sound like fun reads.

Hi Jeanie! :) I went to Paris twice in my life. I remember visiting the chateaux and toured wine country. LOVED visiting the Louvre and the Montmartre district. Before I moved up to the mountains, I lived in Montreal (Canada). The Old Montreal area reminded me a lot of Paris.

The author and this series sound like ones I would enjoy reading. I'm glad you shared Paris in July with us.

I love how you weave the two book reviews in with photos from your times in Paris. This is truly lovely and I always look forward to these July posts, since it may be the only way I will ever get to see Paris.

Hi, Jeanie. Both books sound most interesting. I just began reading "Two Towns In Provence," by M.F.K. Fisher. So far quite good.

Happy Fourth to you and Rick. Hope this finds you at the lake.

Interesting-sounding mysteries. We have not yet traveled to France--Italy always seems to be our destination as my husband has relatives all around that country that he enjoys visiting, but someday I hope to include a few places in France.

I always love your Paris in July stories. I most often gravitate to books that center in Paris and France, so this one would be intriguing. Thanks!

Have fun reading. Wish I had time for a good book. Happy 4th! Janice

Some time ago a Blogger I used to follow went to Paris and did some mind blowing Photography of her Trip to Share, I was sad when she finally ran out of Blog Fodder of the Trip, I felt like I was there. I like that Reality Show where a British Couple bought an Old French Chateau and are renovating it.

I love your header! So much fun!

I look forward to reading more of your posts during Paris in July.

I often volunteer as an author escort at the Texas Book Festival, and one year I was the author escort for two Paris-mystery-writing authors, Cara Black and Mark Pryor. I should go back through my files and see if I can find pictures from this event so I could do a post about it.

Thank you . ..
Two more books to add to my over growing list.
And reading these two, no doubt I will have the list of the entire series.
Loved your photo touches . . .

Beautiful photos of Paris. I yearn to return.

Such a great series Jeanie. Paris is a beautiful place. We hope to re-visit in the future. A great book is such a treasure. happy 4th.

I just put The Bookseller on hold at our library. Thanks for the recommendation. I love the pic of the sailboats!

I am always game for a book set in Paris, and both sound interesting. I sure hope to return to Paris maybe next year.

Great intro to this series! Love that you added in your own photos!

Good to see your here. Sounds like you started with a very interesting read. Love the picture you choose with it.