I'm rewriting my "Strawberry Season" post because I accidentally deleted it (UGH!) Things I learned today -- no way to retrieve a deleted blogger post! I'll try to post-date it so it doesn't show in your feeds but who knows if that will work. If you read that one, skip this one! 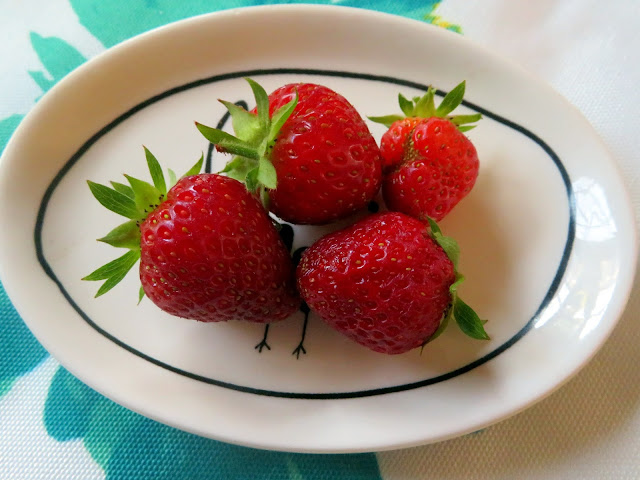 This is my first strawberry harvest. Pretty shabby, isn't it? But since then I've probably pulled in close to a quart (a little less) and more to come. I wouldn't make a living in the farmer's market but I'm happy to have these succulent berries -- they are delicious! 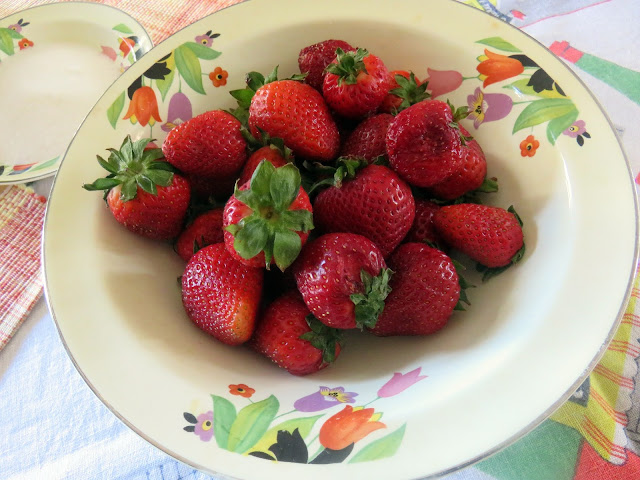 Strawberry season brings fond memories of growing up and spending a good deal of time on my grandparents' farm. It was a small shareholding but they grew copious amounts of berries, cherries, corn, peaches, apples, tomatoes and veggies of all kinds. As they were harvested, my grandmother would can the veggies and make jam, pies and other desserts from the fruit. 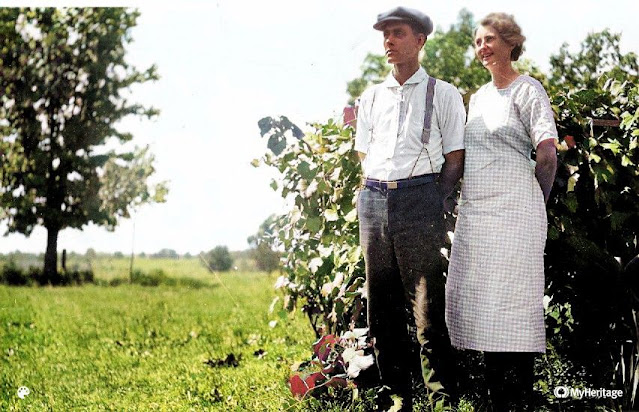 I remember going to their cellar. The ground was dirt and cement walls had shelves built into them. An enormous cistern seemed full of water at all times and was so tall I couldn't see into it, just hear an occasional drip or gurgle. The shelves were filled with goods from the summer, just waiting for dinners to come. 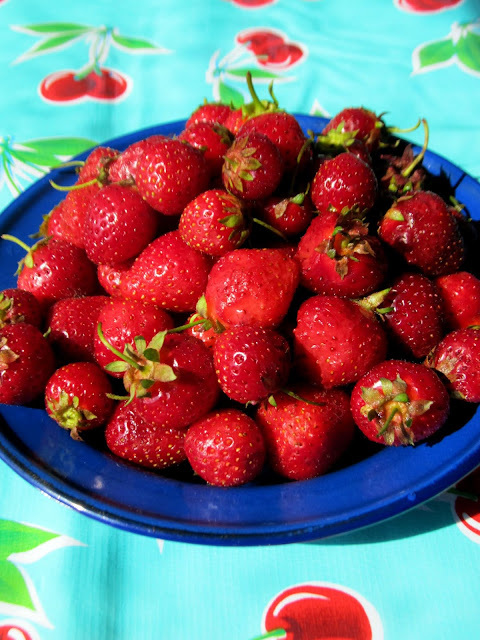 They were prolific berry growers. I'm fortunate enough to have my grandmother's journals from close to thirty years. (That's a post in itself!) Among other things, like daily home and news events, costs, and appointments, she would note things like the number of berry quarts they picked. Early in the season there might be a quart or two, but as things heated up there would be 50, 55, even 59 quarts. 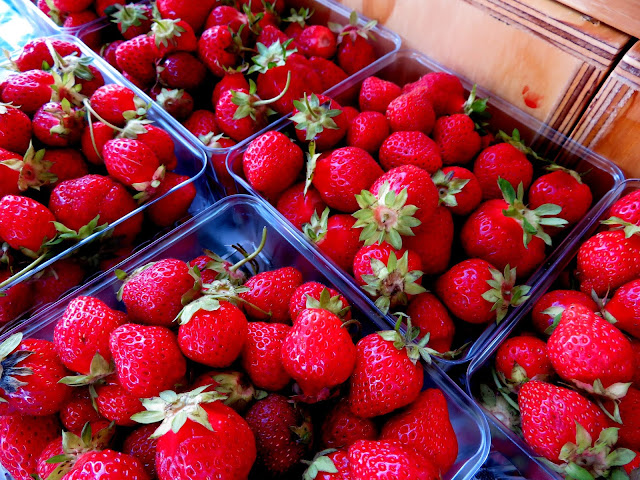 Only one year was the total significantly less -- 39 quarts. That was the year my grandfather was in the hospital for over a month, including a surgical stint. I was only eight and have no memory of this, but then I was young and couldn't visit. I'm not surprise less was harvested and I wonder if there were a lot of happy birds who enjoyed much of that year's crop. 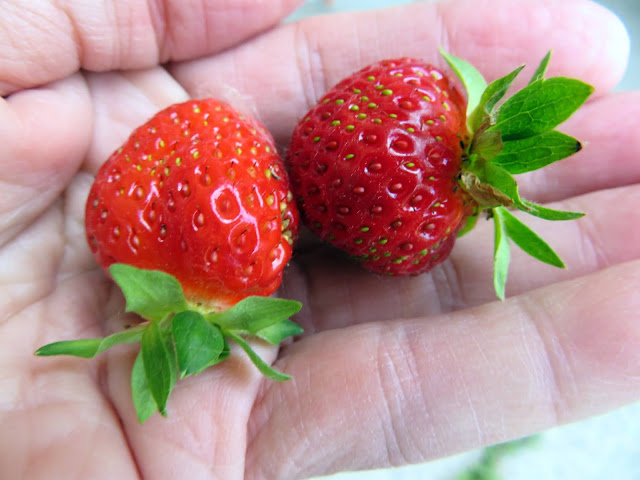 I spent much time with my grandparents and in picking time, I was pretty darned good at it. I was low to the ground and the knees bent a lot better then! I'm sure I ate my share of berries as well, so I may have been just as much a liability as a help! 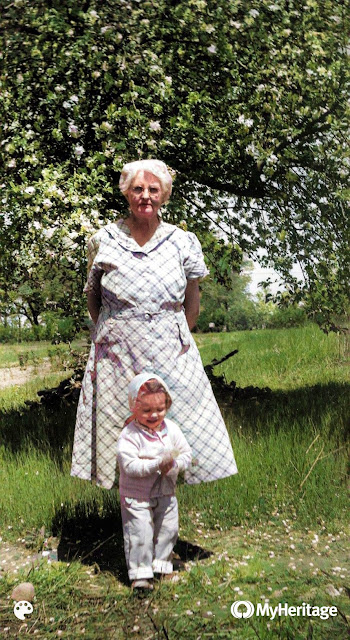 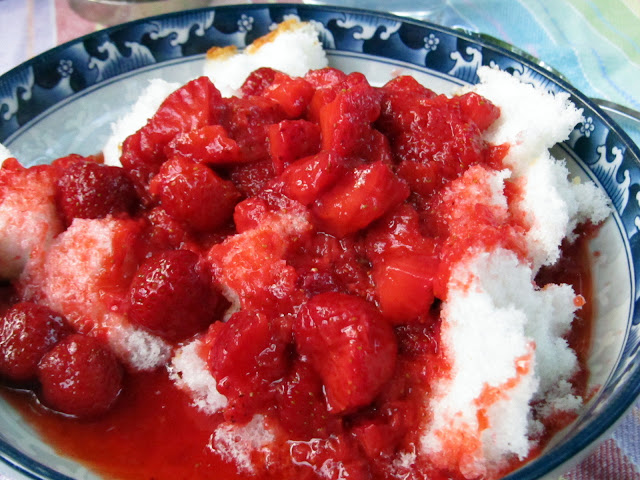 Berries are my favorite thing to buy at the farmer's market, along with Michigan sweet cherries, which will come into season in July. I won't get enough of my own to make that shortcake but thanks to Michigan's enterprising farmers, I will have enough for that shortcake. Or maybe enough for Ina Garten's Pavlova. 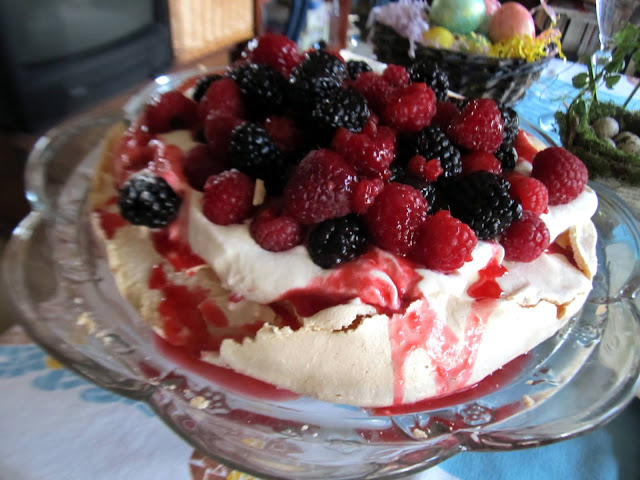 As for my small crop, it will be enjoyed as snacks for Rick and me or added to my yogurt in the morning. No matter what, I win!

Sharing with:   All About Home

My parents would get strawberries, raspberries, and blueberries over the course of the summer and the bulk of that would get made into jam and put into the deep freezer for winter supplies.

We had our first strawberries of the season last evening. Not terrible but not terrific. Has the taste really changed over the years, or is it my palate? And local produce is not cheap!

I do remember this post and your lovely photographs.
I love strawberries, so delicious with double cream.

I'll gladly scroll through those photos of delicious-looking fruit again ;) This is a reminder to make sure fruit is on my grocery list for today.

These sound like idyllic memories of your grandparents' home. In the background I am sure the work would have been hard. Those are nice pictures - is MyHeritage what you use for your family tree? I was using Ancestry.com but people do recommend MyHeritage.

Sorry you accidentally deleted your original post. Glad you still had all the photos and could recreate it. Even if you hadn't been able to though, you'd still have the memories...

Summer Michigan Strawberries get a YUM . . .
although store bought, not so much!
Treasure Jeanie . . . your grandmothers journals!