When I uploaded photos for this post, I uploaded 83. Don't worry. There aren't 83 pics here. I just couldn't decide from the thumbnails! 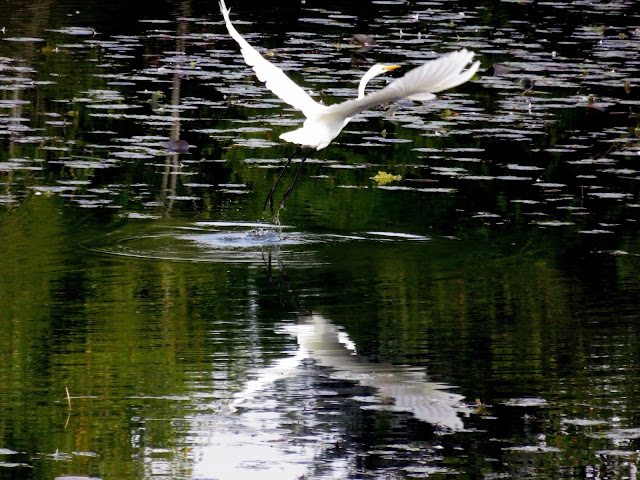 And why? Well, two beautiful Ditch Days! There is a bit of color coming through... 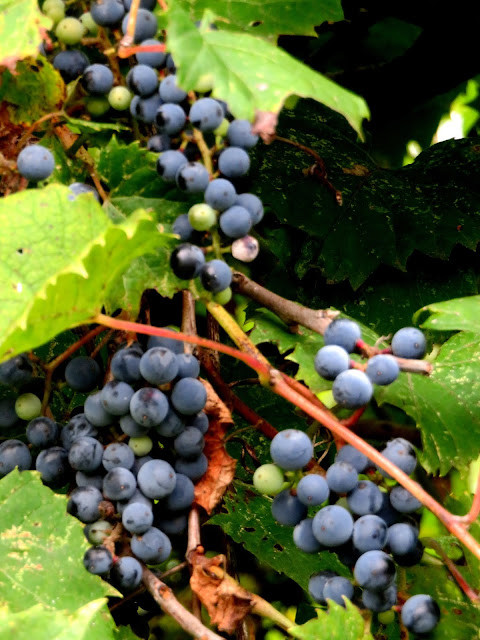 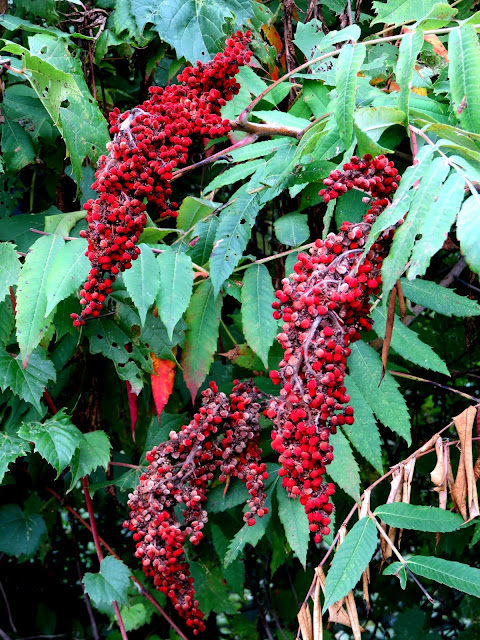 Ellie and Harry are hanging enjoying the pond, along with the ducks. Word on the street is that there are two herons but I've only seen one at a time. So, it's Harry. Because it is. And one egret. (Though a Ditch Walker said she had seen two of those as well.) So, we're talking Ellie! 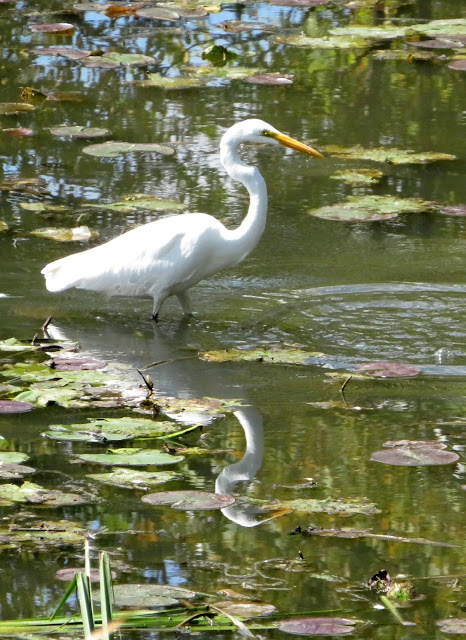 Half these photos were taken with my old camera (all the flight ones and the ones where the birds are in the trees). 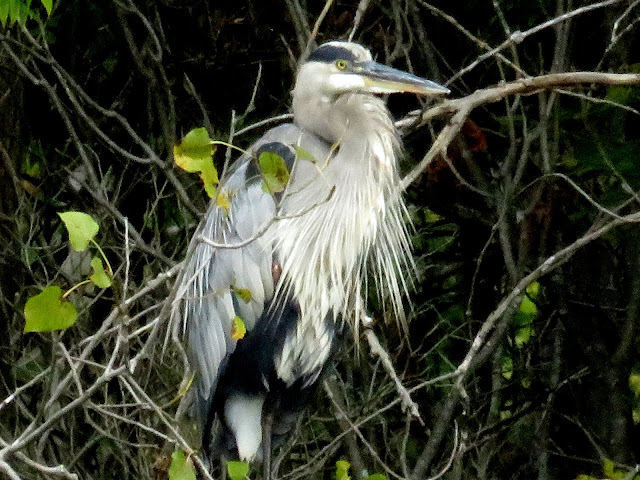 The rest with the new one. I'm loving it! 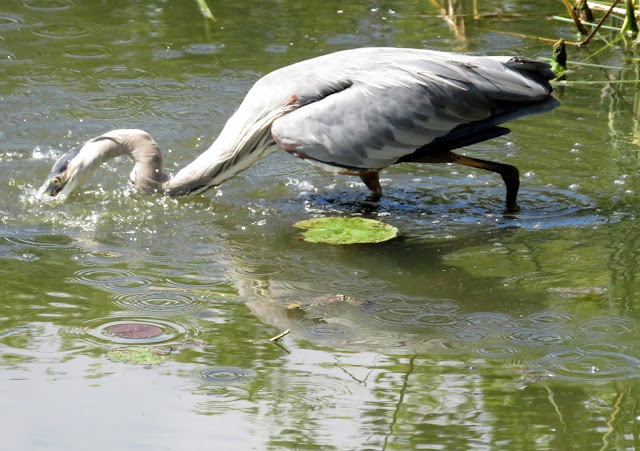 I was lucky enough to catch two fawns on the run... 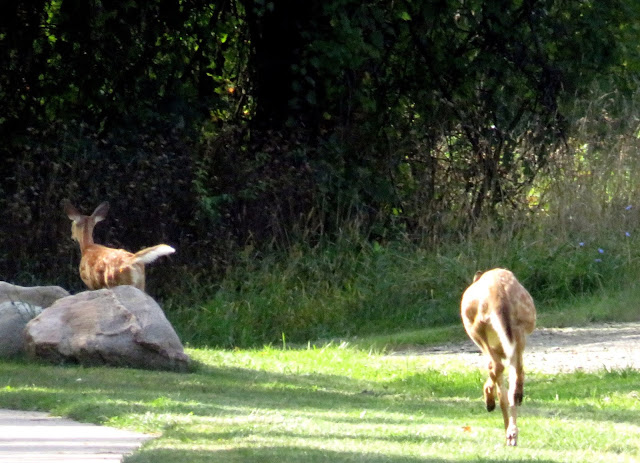 ...and Harry was lucky enough to catch something, too! 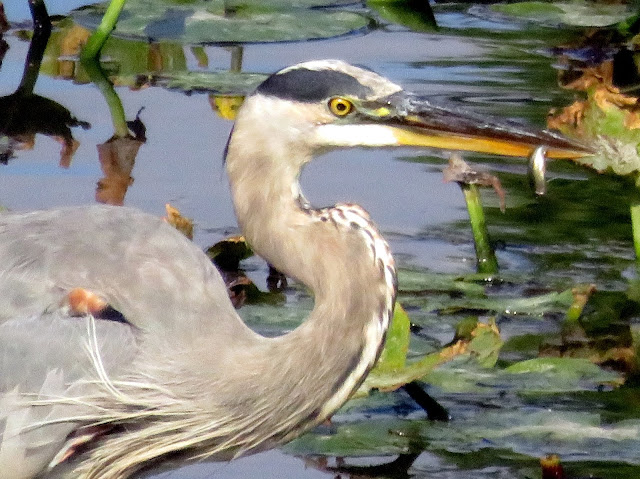 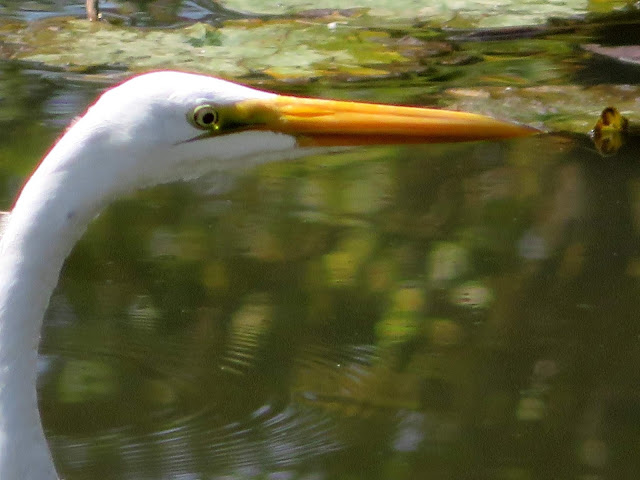 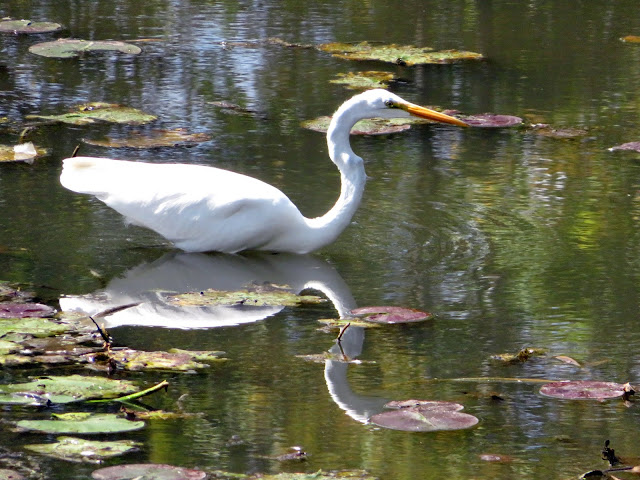 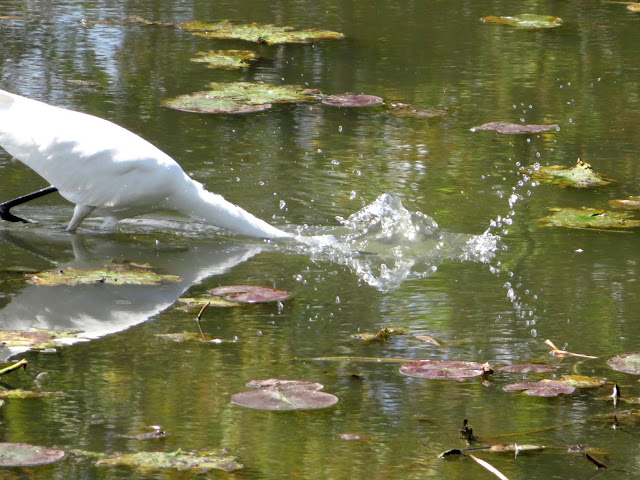 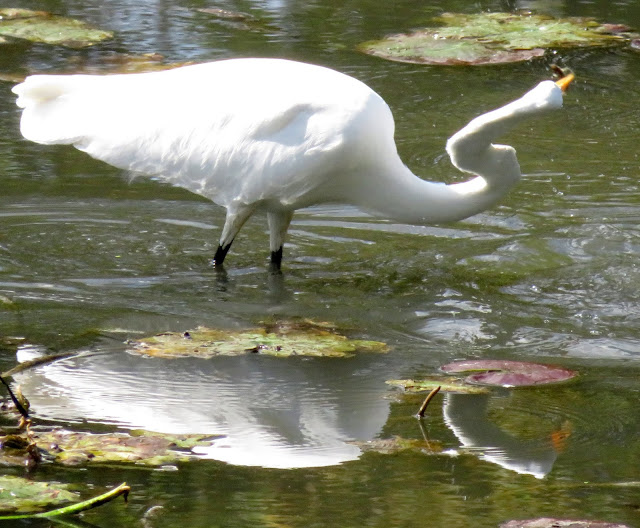 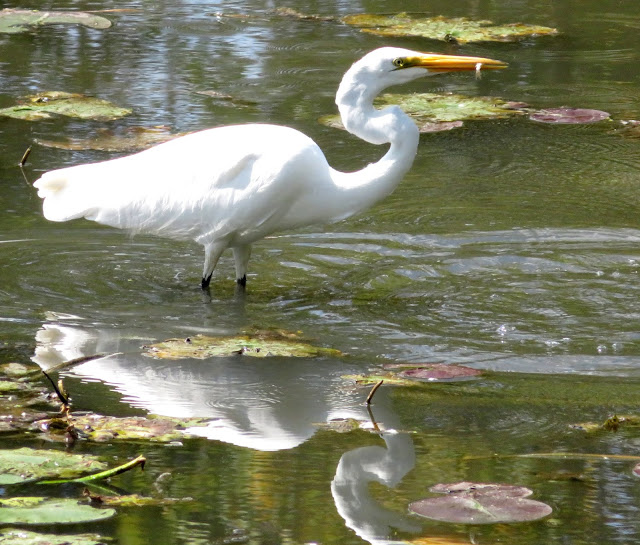 I had heard about both the birds hanging out in the trees but had yet to see them... 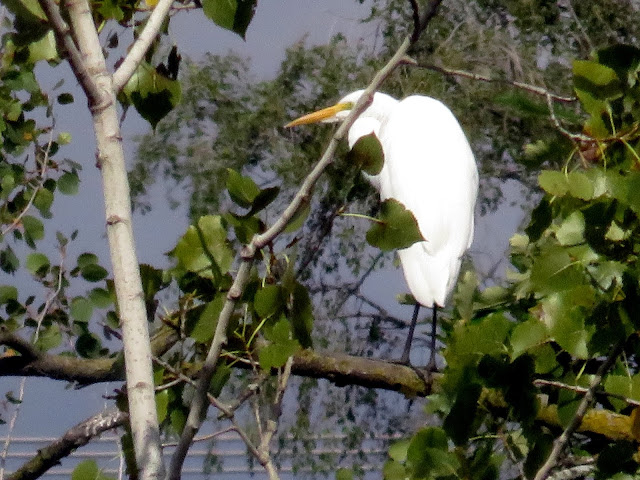 ...until this day. Ellie was way up there. 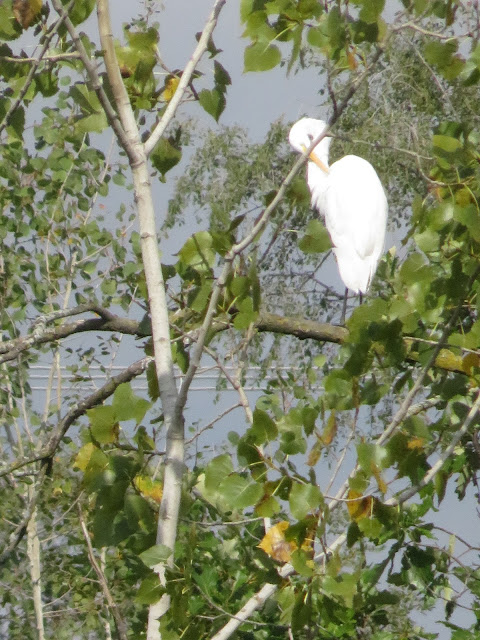 Harry, a little lower and well camouflaged (which may be why I didn't see him before!) 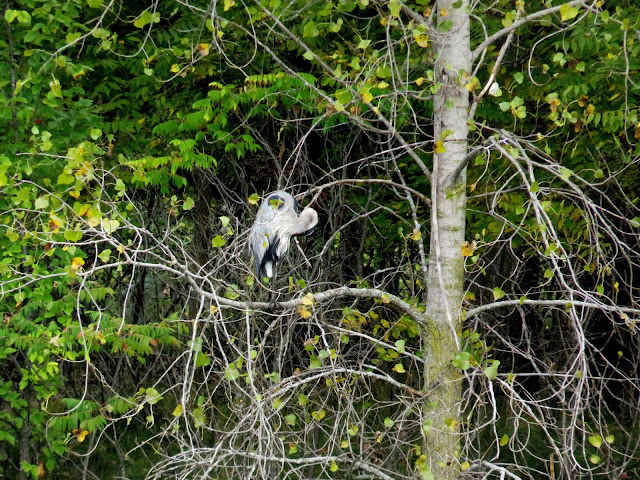 But when they fly, it's glorious! 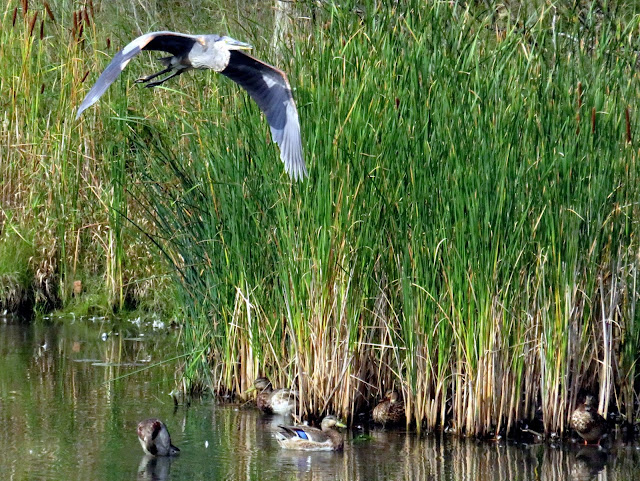 I was lucky enough to catch both of them on the wing. Harry's wingspan seems enormous. 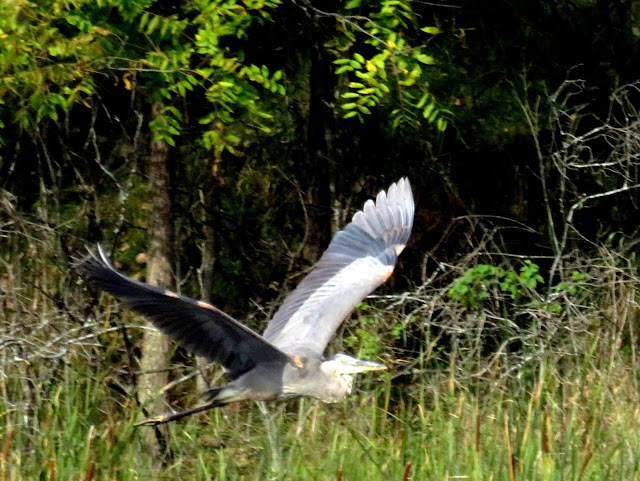 But Ellie makes such a dramatic exit with her white reflected on the water. 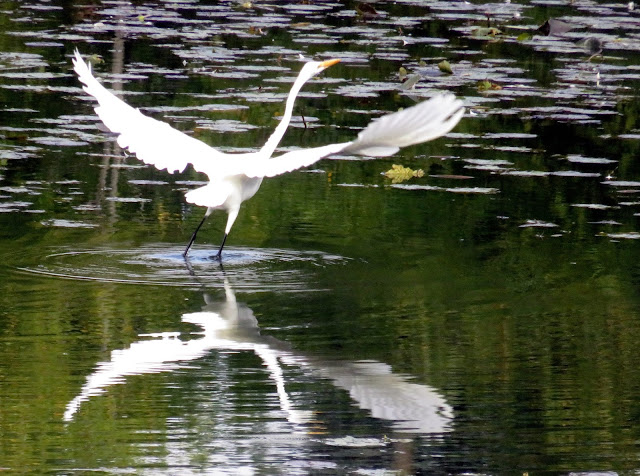 I could watch all day. It was like seeing an angel fly. 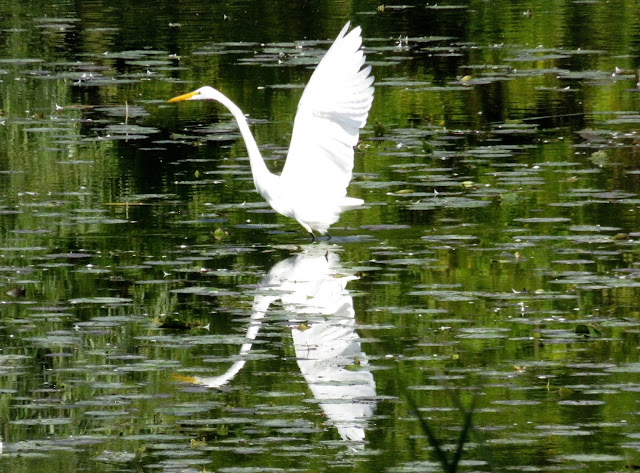 For a bit of time I was joined by Dorothy Duck. 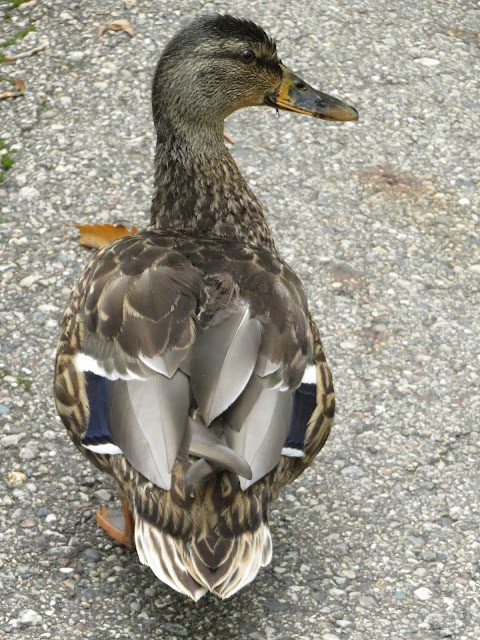 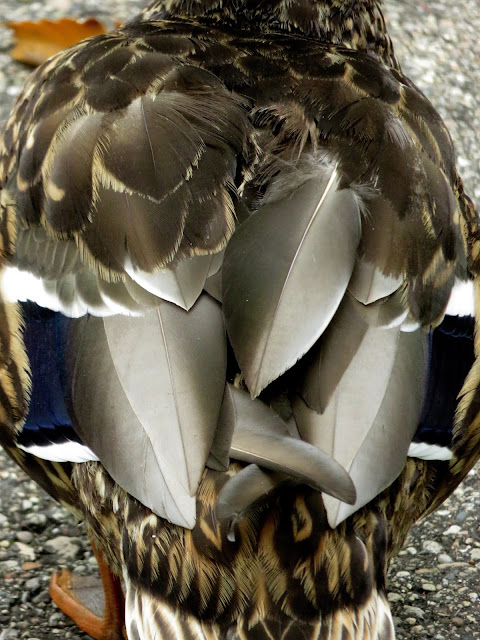 But time to move on and leave this lovely spot behind. 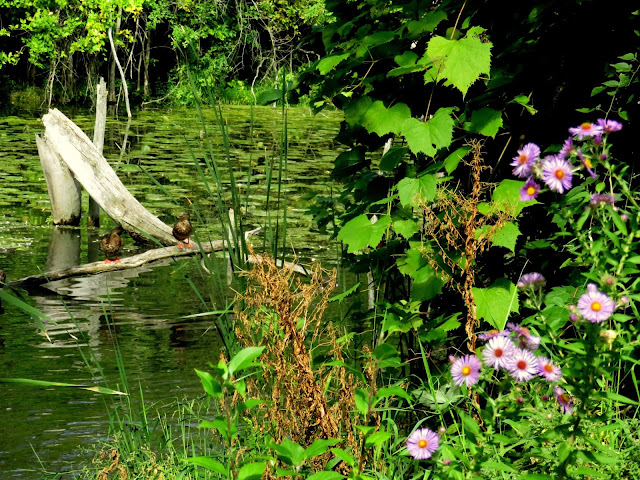 At least for a little bit! (By the way, if you really want to see fascinating bird photos, learn about banding and more, visit David at Travels with Birds. Some of the photography he posts takes my breath away, it's so dazzling!)

Wow! Your photos are awesome! Love all the birdy guests. Your fawns are cute too.

Hello, lovely series on the Herons and Egret. The ducks are a great sighting too. Beautiful collection of photos, I enjoyed the captions too. I am so glad you could link up and share your post. Happy Saturday, enjoy your weekend. PS, thank you for the comment and visit to my blog!

Beautiful photos of the birds Jeanie. Loved the fawn, which is something we don't have in Australia.

Wow! You got some fabulous bird photos. You must be able to get fairly close, even with a zoom to get such awesome shots. They'll all be off soon, sadly. I wish this fine autumn weather, and autumn itself, would last a little longer as it really is the nicest season here in NH. Even better than summer because there isn't that humidity the same way. Happy weekend Jeanie. Thanks for sharing those photos. Hugs-Erika

Ellie and Harry are sure photogenic and it's easy to see that you've got the patience and right camera to capture their beauty. Thanks for sharing the photos with those of us who can't get out into the wild like we used to do.

Great series of images, Jeanie. Your love affair with the egret and the heron is quite wonderful. And thanks for the plug!

Such beauty in the birds. I didn't know they hung out in trees. You photos came out beautiful and thank you for posting.

You got some incredibly gorgeous photos. MOST impressive. Love that new camera and the way you captured all those beautiful birds. Simply stunning photos, all.

Thanks for taking us along on your walk. I have never seen an egret at our pond, but have seen herons a number of times, including in the trees once or twice.

We had fewer ducks this year, but more turtles. :-)

Beautiful photos. What a wonderful place to walk!

The pictures you are getting are absolutely gorgeous. Love that zoom!

Wonderful photos, love the birds. Glad you are having fun with your new camera. Hugs, Valerie

Very pretty! I have enjoyed my visit~

Your photos are so pretty! How close were you?

Such gorgeous photos! I love watching the birds where I live too. The egrets and herons seem to be solo most of the time. The ducks are in groups. I never see them alone.

Ok, I can see why you chose these photos to share out of 83. They're wonderful, Jeanie. I loved each and every one of them. Is this white bird The Great Egret? It is so beautiful to me, and I've seen them only once in marsh areas. The picture of the red berries is pretty, and definitely looks like Autumn. The fawn are precious, aren't they? I always enjoy your interesting photos, Jeanie. I'm also showing some Autumn around my neck of the woods coming up. : )

Jeanie, stunning photos of Harry and Ellie. We have had three fawns playing in our yard for several weeks. I just hope they don’t decide to enjoy a salad buffet in my garden. The ditch offers great photo opportunities and you take full advantage with your good eye and camera!

Ohhh, can´t decide which shot I like most!!
Harry, certainly, but also the details of Dorothy!
Always great to have a new cam!

These photos are especially beautiful. You must love your new camera. The reflections are great. Enjoy!

Good morning dearest Jeanie! It's been a few days since I've been able to come and visit with you, my mornings being extremely busy as I rush off to school. It's a delight to spend this Sunday morning seeing your side of the Midwest and how nature is slowly and elegantly transitioning. LOOKING GOOD!

Your enthusiasm for the birds shines as brightly as Harry and Ellie's feathers. I'm glad you added the duck, though. I enjoy closeups of bird feathers no matter the species, and these are lovely.

I'm going crazy trying to spot a bird that sings every morning around the marina -- for only an hour or so. It's obviously there, but I can't find it -- I can't even see it when it changes spots. I'd say it would be easier to see when fall comes and there aren't any leaves on the trees, but it's in the middle of sailboat masts. Nothing to fall there~

Stunning photography! I always love these photos of Harry and nature. May I ask what is new camera with the great zoom lens? Happy Sunday.........

I'm glad you were able to be there to enjoy that time at the ditch. It must have been wonderful to watch the birds.

Looks like a great camera! I'm beginning to research cameras cause I need a good one. What is the one you are using?

Jeanie, I, for one, wish you would have posted all 85 photos. They are so beautiful. When Ellie is taking flight, it looks like an elegant water ballet and the feather details on Dorothy Duck are spectacular. What kind of camera did you get? Your stars perform and photograph beautifully..xxoJudy

Lauren @ My Wonderfully Made said...

They are such beautiful birds! We don't have them here but where we vacation (coming up this week!!!) in GA, they are everywhere. You really captured some great moments!

Jeannie, You get amazing shots!

You've captured these beautiful birds so well! I love the sequence of images of the egret catching its dinner. We do have egrets and great blue herons at my lake, but the herons are very shy and hide where we can't see them.
I will check out David's blog, thanks for the recommendation.

Such beautiful pictures of nature in action! The water reflections are the best. I wouldn't have minded seeing all 83 pictures! :-)

Wow! Amazing shots. I love all your photos!

Wonderful photos . . .
Catching all this “in flight” is getting you ready!
Harry has a friend in you . . . Dorothy Duck too!

You caught my attention with the mention of birds. I like birds, but why wouldn't I?

Arlee Bird
Tossing It Out

Those birds are skilled at fishing!

Well I would say your photos are dazzling for me. They are all just glorious!!! So very special! They are all my favorites, even Dorothy's feathers!

Love the feather details. Beautiful pics. You have much better luck than I had when I visited Pelee National Park, hot birding spot at the southern tip of Canada. It was Sept. 21 and we had stormy wind. But I did witness humongous waves at Erie’s northern shore.

Wonderful images. I love egrets, herons and ducks -- so much fun to watch them. Great fishermen, too!

I love these photos - especially the ones with the reflection in the water! So pretty!!!