Lift a glass of cheer! Forgive me if I take one last look at December and join us for a little wine and a lot of fun! 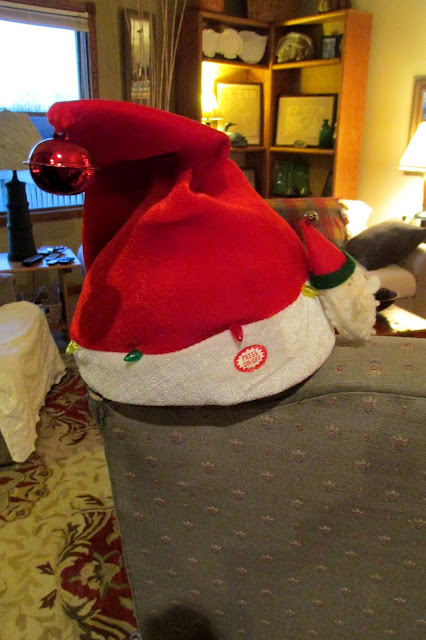 Cork Poppers celebrated the holidays with wines from the Southern Hemisphere. 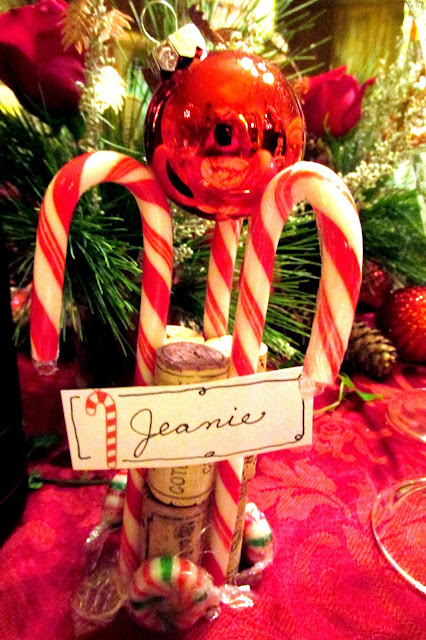 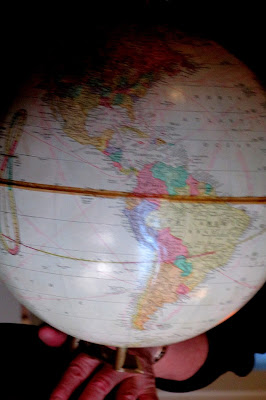 If you've read a lot of Cork Popper posts (click on the link on the menu for more!) you know that decanting any red wine always is a good option if possible, giving it some breathing room. So, that was the first order of business. 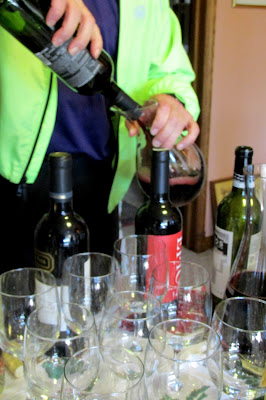 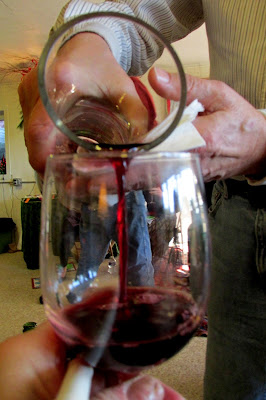 Then we loaded up our plates with a great selection of cheese, crackers and bread! Never taste hungry! 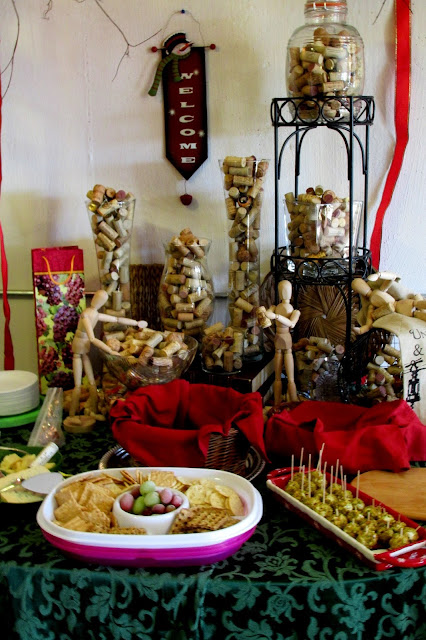 Our hosts Barb and Mike kicked things off with champagne and an abundant selection of snacks from Pat, Dick and Cheryl and Rick's baguettes. Then Barb led us in a rollicking version of "The 12 Days of Wine." (This is a pretty fun thing to do and you could build your 12 days on anything -- family related, hobbies, books, you name it!) Just be sure to hold up your "verse" so no one has to remember! 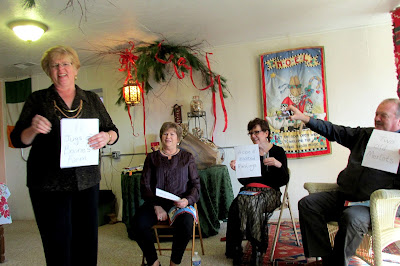 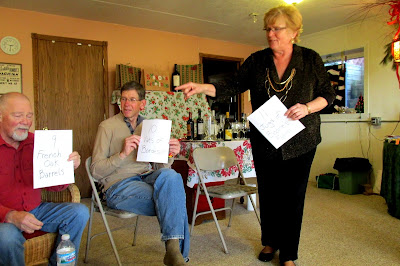 There were plenty of wine bottles to open and lots of friendships and reconnecting! 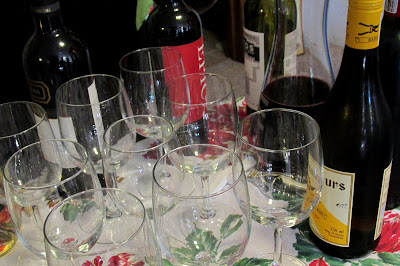 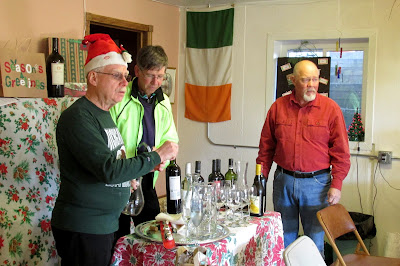 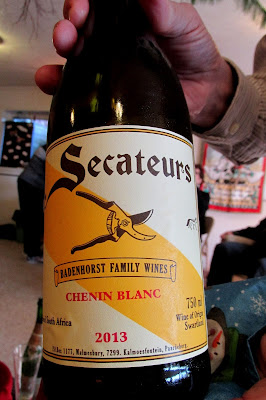 There were mixed reviews on this white. Our resident white champion, Cheryl, gave it an "icky," adding that it smelled like socks in the locker room, while Clayton said it reminded him of a Greek wine. Even at $12, we'll all give this one a pass.

New member Jan was up next with Alta Coleccion Bodega Piedra Negra Pinot Gros. This was a white from Valle dun Cico Mendoza, Argentina. We all liked this one much more -- it had a nice finish, was smooth and very clean. There were a bit of a peppery kick to it and was much like my favorite, Clean Slate dry Riesling. We didn't have the exact price but it fell between $10 and $20. 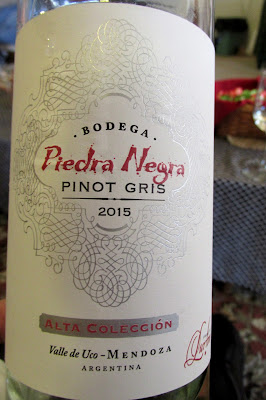 On to the reds. Rick chose one of our favorite wine countries -- Chile -- for our selection, a Cabernet Sauvignon 2013 from Alto Chachapoal Chile, Lagar de Bezana winery. 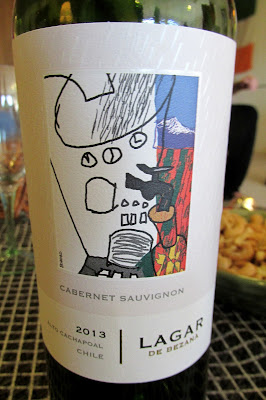 The label was great. The reviews less so. Comments included "it smells fungussy." This is a young winemaker who has only been making wine since the 90s. To be fair, Barb said it was "smooth," while Mike said it had a complex aftertaste. At $10.99, I'll pass on this one, too. It wasn't that there was anything wrong with it, it just wasn't quite as "right" as we would have hoped it would be. 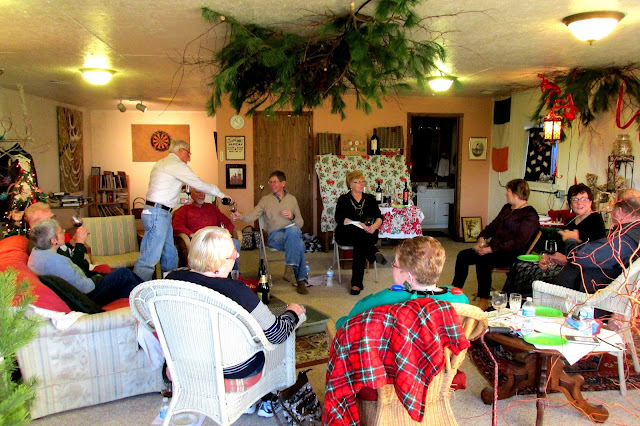 Next up was Mike with Altos Las Hormigas Malbec Clasico 2013 from Mendoza. "Anything from Mendoza is good," someone said. That was true of this one, to be sure. One could taste the cherry in this one and it had wonderful smoky undertones. (It also went very well with the goat cheese!) Dick found the bouquet a little strong but it had a very nice finish and I'd drink this one again, especially at $13. 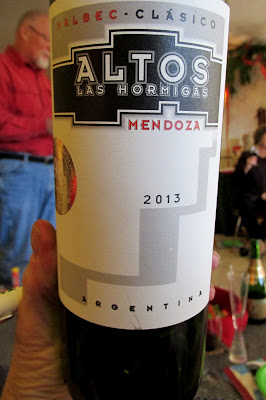 From one Malbec to another! Roger's offering was a Bodega Argnto Malbec 2013. Rick recommended, "Buy Roger's, not the one we brought!" It was more peppery than the one before and definitely smelled better. Dick and Clayton agreed it was the best today and I noted an excellent finish. At $9.99 it was an excellent price, too. 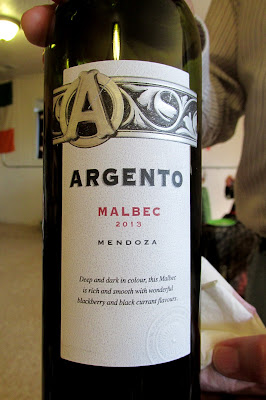 We were still having reds when we tried Faithful Hound 2012 from Mulderbosch in South Africa. I thought it was the best of the day and it won the best label vote from the dog lovers of our group. The price was $14. 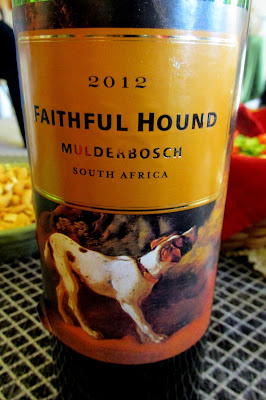 Pat's Santa Ema Reserve Merlot 2013 from the Maipo Valley in Chile was next. The comany called it "environmentally friendly and economically viable." My notes said "one of the best." Price on this one was $16.99 but Pat paid $13.97 on sale. 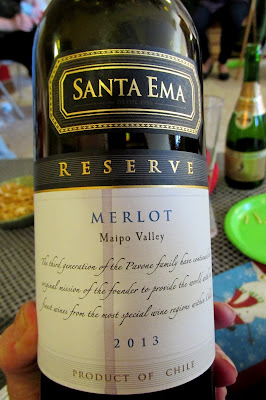 Our last offering was Anne's Epic A 2013 from Chile. This was a red wine blend from Chile's Central Valley, the San Pedro region. I wrote that it had a very nice finish and Dick called it "Cherry Palooza!" I must have really liked the finish because looking at my notes, I wrote it twice and once had a big star by it! It had a bit of a cherry tone to it and according to the label, dark cocoa, though I couldn't pick that one out. 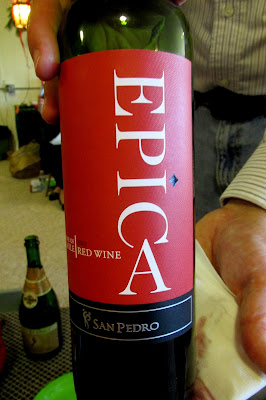 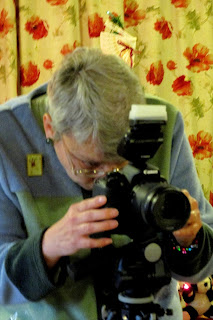 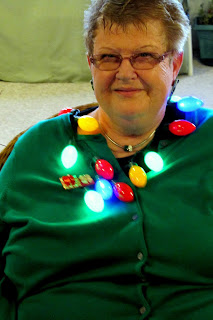 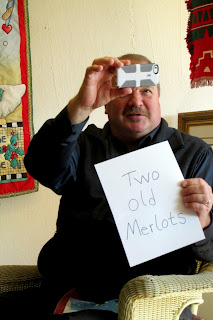 You'd think after all that munching we wouldn't be ready for dinner but that notion passed quickly! After all, when you saw Barb's magnificent table with twinkling lights and glorious individual centerpieces (each woman got to take one home), we realized we might be able to put down a bite or two.


And it was fabulous! A delicious chicken dish, creamed spinach, a terrific salad and my peppermint stick ice cream cake roll for dessert. Yes, we were full!

Not too full to swap presents, though! I'm not sure where Rick found his Santa ensemble but it added to the merry! 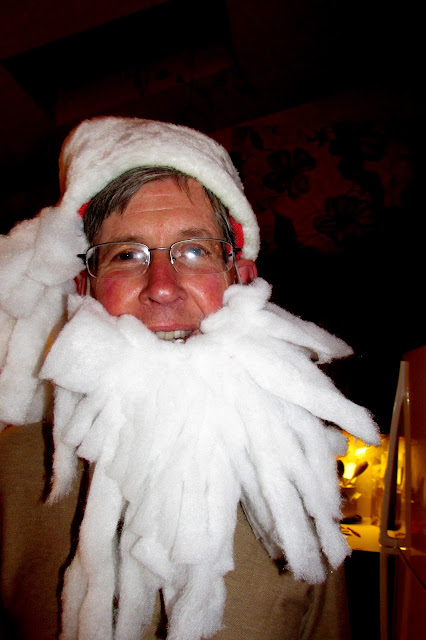 All good things come to an end, and so did the evening. So with smiles on our faces we took off till next time.


Till then, all of us Cork Poppers hope that the rest of your year is filled with good times, good friends and good cheer -- and if you like a little wine, good wine, too!

Note: You can find other Cork Popper-related posts based by wine category by clicking the tab at the top of this page, under my banner. You might find your next favorite!
Posted by Jeanie at 3:16 PM

What fun! Amazing how many wine regions there are in the southern hemisphere.

I'm especially intrigued by peppermint stick ice cream roll. Especially now that it's another year almost until I can buy chocolate-dipped peppermint Joe-Joes.

Looks like lots of fun. The table is magnificent.

What odd names some of those wines have. Secateurs - ! Does that mean the same in the US as it does here? Those things you cut rose stems with ? :D
Still, as usual it looks like your gathering was fun!

Annie Jeffries said...
This comment has been removed by the author.
Thursday, January 21, 2016

Cork Poppers!! Every time i see you post one of these, my head pops up like a prairie dog popping out of her burrow. Fun time, guaranteed.

The guy in the red shirt reminds me of Don.

We love wines! I do like great-looking labels, but I've learned not to let them sway my judgement when buying. Before Christmas there was a wine in a gray pottery bottle with the name Silver, and we bought it because I wanted the bottle for a cute vase. (Not a good reason!) It was pretty bad...but I am using it for a vase. Did you say peppermint ice cream roll - oh, my!

LoVed it, everything is festive, looks beautiful and looks like SO much FUN!
Happy New Year dear Jeanie!

I buy wines because they have pretty labels ALL the time -- wouldn't that be a great career (designing the labels?)?

Sure looks like everyone! had a wonderful evening - I'm enjoying all the pretty (and delicious) festivities on this gray, grim day. Might have to try that (other) Malbec, too! Thanks so much for posting

That table was so pretty and how nice that you got to keep one of the arrangements. I thought the label on your bottle was cool. If you're choosing by the label, that was the one to pick. :)

In these dark, cold, snowy days of January, I'll gladly look bask in the December glow along with you, Jeanie! :) And as always, a super treat to visit with you along with your Popper friends! We've tried many wines from south of the equator, and really enjoyed them--Aussie-land wines especially. Your group is such fun--from the care of making a really inviting table, yum food pairings to enjoy with the wine, to fun & games! And fun with Rick playing Santa... LOL! LOVE the group portrait! :) Wishing you all a new year of a merry & tasty get-togethers! ((HUGS))

Even though I don't drink wine (or anything alcaholic, to be honest) I still think your Cork Poppers gathering sounds fun!

As usual it looks like you guys had such a fun night together! I was thinking of you and your gatherings yesterday when I was picking out a wine to serve at the dinner I am hosting tonight.

The table looks so beautiful and festive - and the meals sounds delicious!!

I will lift a glass and look back with you! Always fun to do that especially when a good time was had by all. Enjoyed your photos…….Have a great weekend. We may see a little of the white stuff down here!!!!

Looks sumptuous, a good time had by all. I was looking forward to wines from New Zealand and Australia to see what you chose and your review but it appears there weren't any on this occasion. Unless I'm blind, I did read the post twice in case I had missed something. If I haven't tried a wine and it has an intriguing label (and not too expensive) i will buy it. I have found some excellent reds this way and as it turns out some I cannot afford again as I also originally purchaed them at a sale price. Does this happen to you?

Twelve days of wine:)
I love how you let the celebration linger:)
You make me want to party, friend!
Thanks for sharing your zest for life,
Jennifer

YOU all look as if you really know how to have some FUN! Oh Jeanie, enjoy another weekend of love, friends and a good RED!

looks and sounds like a wonderful evening. thanks for sharing your thoughts on the wines!

It looks like a totally fun time together. The table is beautiful. Loved the individual name identifiers too.

Everything looked so festive. Glad you had such a good time.

what a great time ....love all the great photos

Oh, this just looks like such a wonderful time! You are involved in the most joyful activities.
Thank you for sharing these selection of wines with us!
Jemma

i am not a wine drinker but it sure looks like you and the gang had a great holiday party. The table and decorations were beautiful too.
Happy New Year, Jeanie.
xo jj