Postcards From the Lake, 2015 Edition

I'm a little late to the summer catch-up party between the blog events for Paris In July and Vanessa's Tea Party posts. Plus pulling together Rick's birthday party which was last night. But nonetheless, a postcard from the lake. 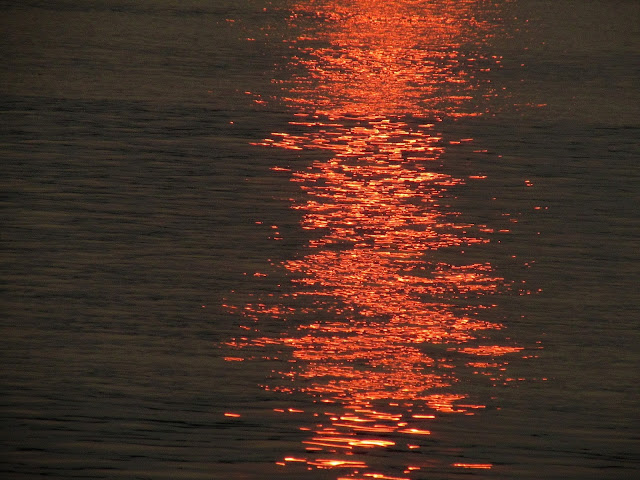 Rick rode his bike up -- camping halfway and was here for a week. I stayed on after he headed home, enjoying mostly glorious weather apart from one storm. 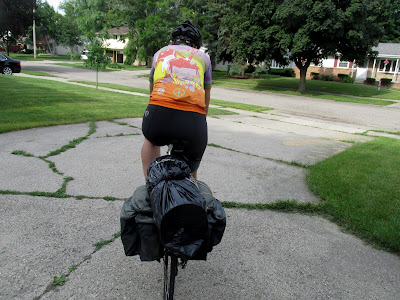 This was the first two weeks of July and the weather was drop-dead gorgeous for two weeks, apart from a rain/wind storm that took down two (and a half) of the screens that Rick and I labored to put up on our porch a few days before. Actually, he did most of the labor. I was more like the screen sous chef, holding things in place and untangling the spline. That said, I re-did much of it solo, as he left for back home and work. I've been doing homeowner repair. I do pretty well till I get to the tall part. Too short and too much vertigo to stand too high! 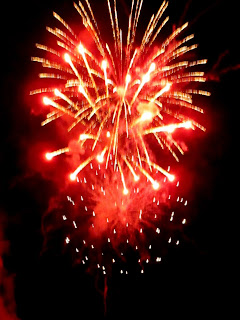 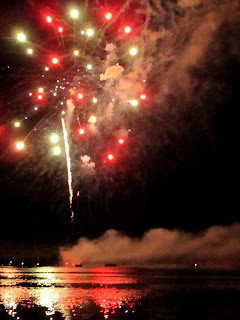 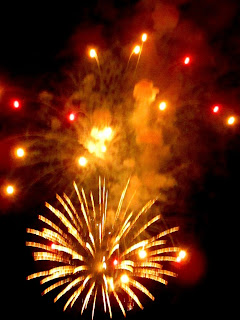 The fireworks were lovely, of course. We have a ringside seat, as they shoot them off straight across the lake from the cottage. Personally, I think last year's were a little better, but they beat most displays I see and no arguments or complaints. 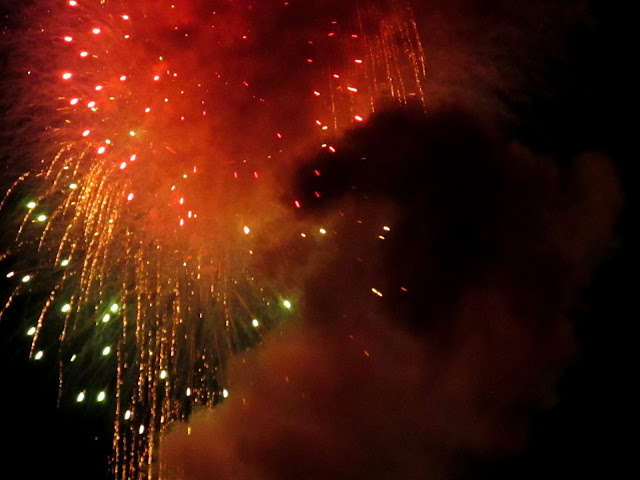 Big arguments or complaints about the neighbors. They are on the other side of a wooded lot and starting at 8 p.m. on Fireworks Night (which was July 3 for us) they ramped up music so loud I swear they could hear it a half mile away. It wasn't bad for awhile (well, it was, but you could cope) but when we went to bed around midnight it was just as loud and lots of bass, even with the windows closed. Our neighbors on the other side were having a pleasant bonfire. Chatting and all but nothing obnoxious. They said they were up till 1:30 and it was still going strong. I feel for the people directly on the other side of them. 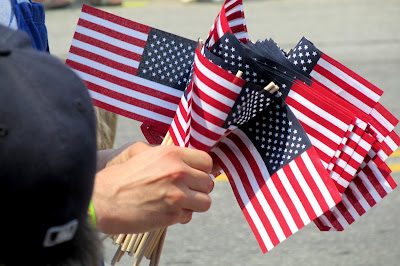 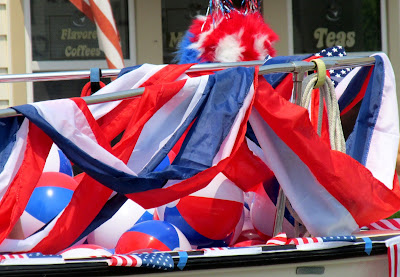 The fourth was a lovely day. We did our traditional picnic -- Rick rides 50 miles. I bring food in the car and we meet for what I call the Lake Woebegon parade, have lunch and take our own ways back. A very long parade, with flags, candy-tossers, kids, queens and Moses.

A nice visit from Kevin and Molly added to the fun of that first week, after which they managed to squeeze Rick, his guitar, computer and bike into this somehow and took him home. 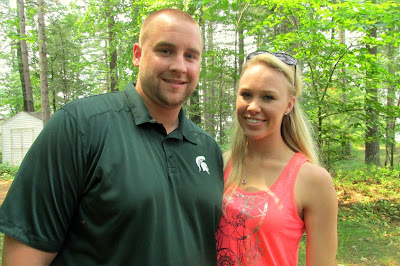 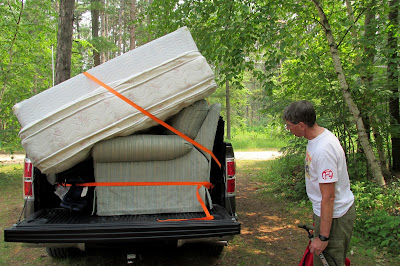 I've been enjoying the Ducksters -- mom and eight babies who float by and hang out for awhile. They float in formation and when mom marshals the troops, off they go. 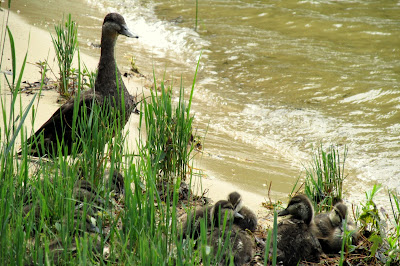 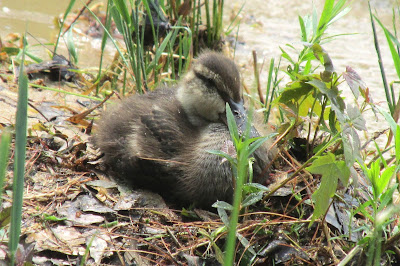 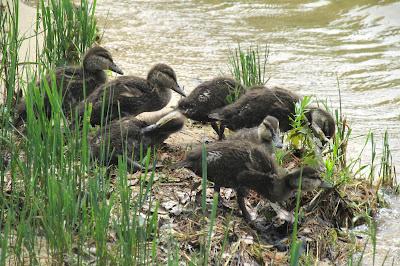 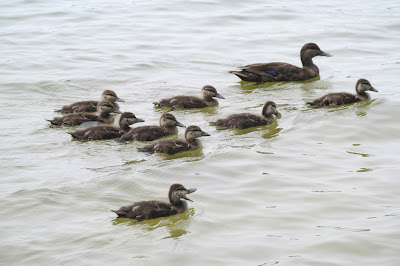 Then there was the magical day when 40 Canadian Geese gracefully moved across the lake -- a peleton of geese, I think, all in formation. It was magical. (There was also a brief moment of panic, the one we all have when they decide to come up on your beach and it turns into the ultimate litter box!) 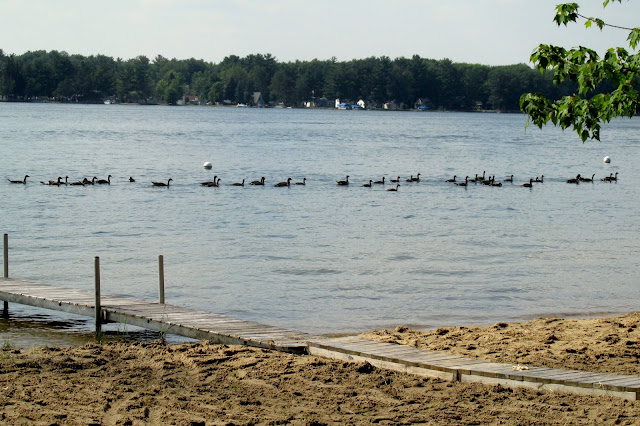 I've had meet-ups with two Lansing friends who have moved north, Maura and Gretchen. Maura and I had a good long catch-up and lunch and it was hard to say goodbye! Gretchen surprised me with a second visit and the surprise offer of a boat ride. It was the first time I'd seen the lake from the lake in ages and it couldn't have been a more glorious experience. 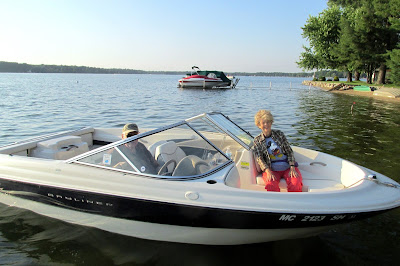 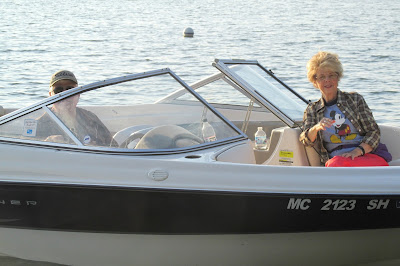 I touched base with mom's best friend who lives here and finished my fifth seventh book. 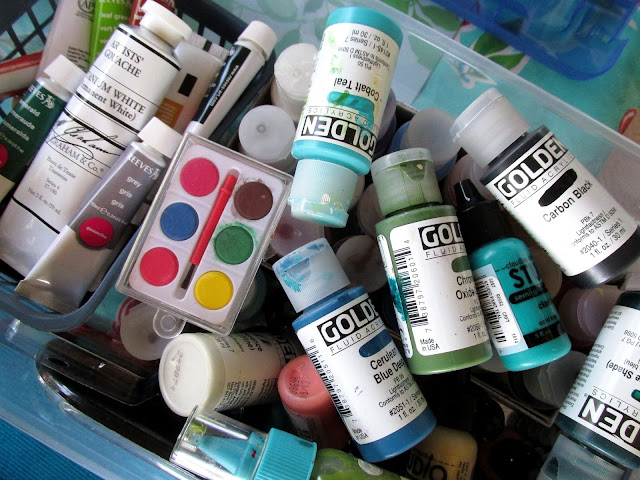 And yes, a little bit of art, too. Well, a lot of that, but I'll save that for another time. (This is actually better now that I've gone back and played with it, adding a bit more Lizzie touches to it. Might repost it later!) 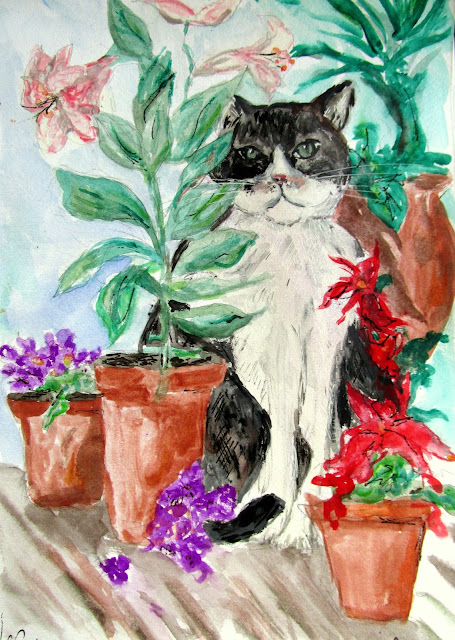 I leave you as we began, with a sunset. 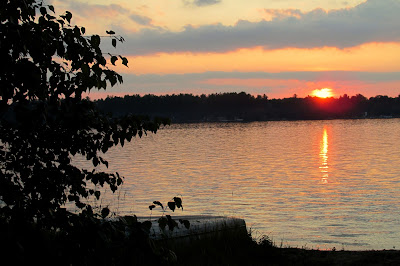 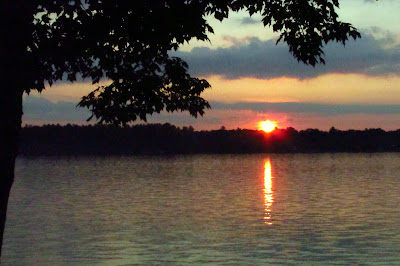 I hope you're having a great summer. I'm taking part in the Paris in July posts (so lots of looks at all things Parisian) and Vanessa's Mad Hatter tea party, so if you're interested in those things, scroll down the posts a bit!
Posted by Jeanie at 9:31 AM

Email ThisBlogThis!Share to TwitterShare to FacebookShare to Pinterest
Labels: Fourth of July, my art, Otsego Lake, Postcards from the Lake, summer

Fabulous! You have such a wonderful social life.

You have captured an idyllic summer! The fireworks photos are spectacular. (Unfortunately the 4th of July bad behavior seems almost universal!) Such lovely times for you this summer!

Oh my Jeannie......looks like you are having a MARVELOUS summer experience......bless you!!

I have been wondering how Rick's birthday party went! I hope it all went smoothly and that the weather cooperated! Can't wait to hear more about that!

Looks like you are having a wonderful time up at the lake. There's just nothing like being up there. It all sounds wonderful - except for the obnoxious, loud neighbors. Thumbs down to that. :( I have only been at the lake once and will only get up there one other time before Labor Day which is sad but our summer weekends just filled up so fast!

what a wonderful summer you are having! Beautiful shots! (sorry about the obnoxious 7/3 night neighbor's behavior. You might want to invest in a 'white noise' machine for next year...)

Oh, it all sounds so wonderful, Jeanie! I loved the pictures of the fireworks, the ducks, the sunsets, the people.... what a great place to spend the summer. And now that you're retired, you can stay there so much longer! I loved the picture starring Lizzie!!

Such fun is this catch-up, Jeanie! That top images just sinks into my soul... such serenity! And those were great captures of fireworks--not always easy to get on camera! Seeing your tub of paints & supplies makes my fingers feel itchy! I've been playing with a little monoprinting lately--fun mess time...LOL! LOVE your petit chat painting! :o) VERY much enjoyed your Paris reading post last time... When we were in the US last month, I looked at the Edward Rutherford novel when we were at a bookstore... I might have to add that to my reading/library list! :o) Happy Days... and happy day to Rick! ((HUGS)

Jeanie dear! HELLO! Great postcard from the lake....oh how summer would not be summer without a body of water to enjoy! OH THOSE DUCKS! They have been a joy to watch around here as they have enjoyed the lakes here AND the huge puddles of water from our storms. You mentioned gorgeous weather....we too have had the most PERFECT summer weather. Until this morning. Again with the thunder storms! But this is why we are so green and lush this year.

Jeanie, it's so wonderful to catch up with you again. It looks like you had a wonderful 4th of July :)
Love those duck pictures, they are SO cute!
And the geese formation is amazing.
That painting is so beautiful, I'm happy you got to paint some, I miss doing that so much.
I hope you are enjoying summer to the fullest and that you are doing well.
Thank you so much for your sweet and lovely comment. It made me smile happily.
Have an amazing weekend, wonderful friend.
Lots of hugs to you,
Beate

Your postcards always are the best. What's not to like about a combination of beautiful nature, fireworks, ducks, and an artful cat? I laughed at your Lake Woebegon reference. I used to have a set of tapes of Garrison telling stories from his first book -- quite long ago, as the "tape" reference indicates. Maybe I need to find some of those stories to listen to at work -- anything to take my mind off the heat!

The truth of the matter is, we mostly endure summer here. But September is coming, and then October. Until then, most pleasure will be early, late, or inside!

Well... Other than the neighbours on one side, who remind me of some of the holiday makers around here, who seem to think that if they've still got the energy and will to stay up partying, then everyone else should want to be up partying too.

It just sounds so peaceful at the lake. What beautiful sunsets and fireworks. Art time too would be a delight. I am hoping for a little art time next week as my "live-in gardener" will be gone for 4 days.

Hi Jeannie. The lake looks like such a lovely, relaxing place to be. Sorry you had to deal with obnoxious neighbors on the 3rd. Some people just really have a complete lack of regard for others, don't they?

Your pictures of the fireworks are great! Those aren't an easy thing to capture on camera. The mama duck and her ducklings are adorable. Isn't so much fun to watch mothers and baby animals? There's something so simple and sweet about it.

It sounds like you're enjoying your summer and retirement definitely seems to agree with you.

Your time at the lake sounds and looks so idyllic. Hope your summer continues to be delightful.

You must have had such a good time at the lake. And when you said Rick rode his bike all the way there I sort of gulped! He really must love bike riding!!

Love your painting of Lizzie!!

What a great July! Lots of friends and family. A bit of art. A boating adventure. And some good books.

Oh Jeanie, what a wonderful summer you are having. Wonderful postcard pics from the lake and Love the fireworks. I have Paris posts that never made it to the party but will share later.
Enjoy the remainder of your summer sweet friend............