Cork Poppers: Nothing Boring About Bordeaux!

There may be better things to do than sip Bordeaux on a Saturday, then have a fabulous meal. I can probably come up with a couple -- but not many! 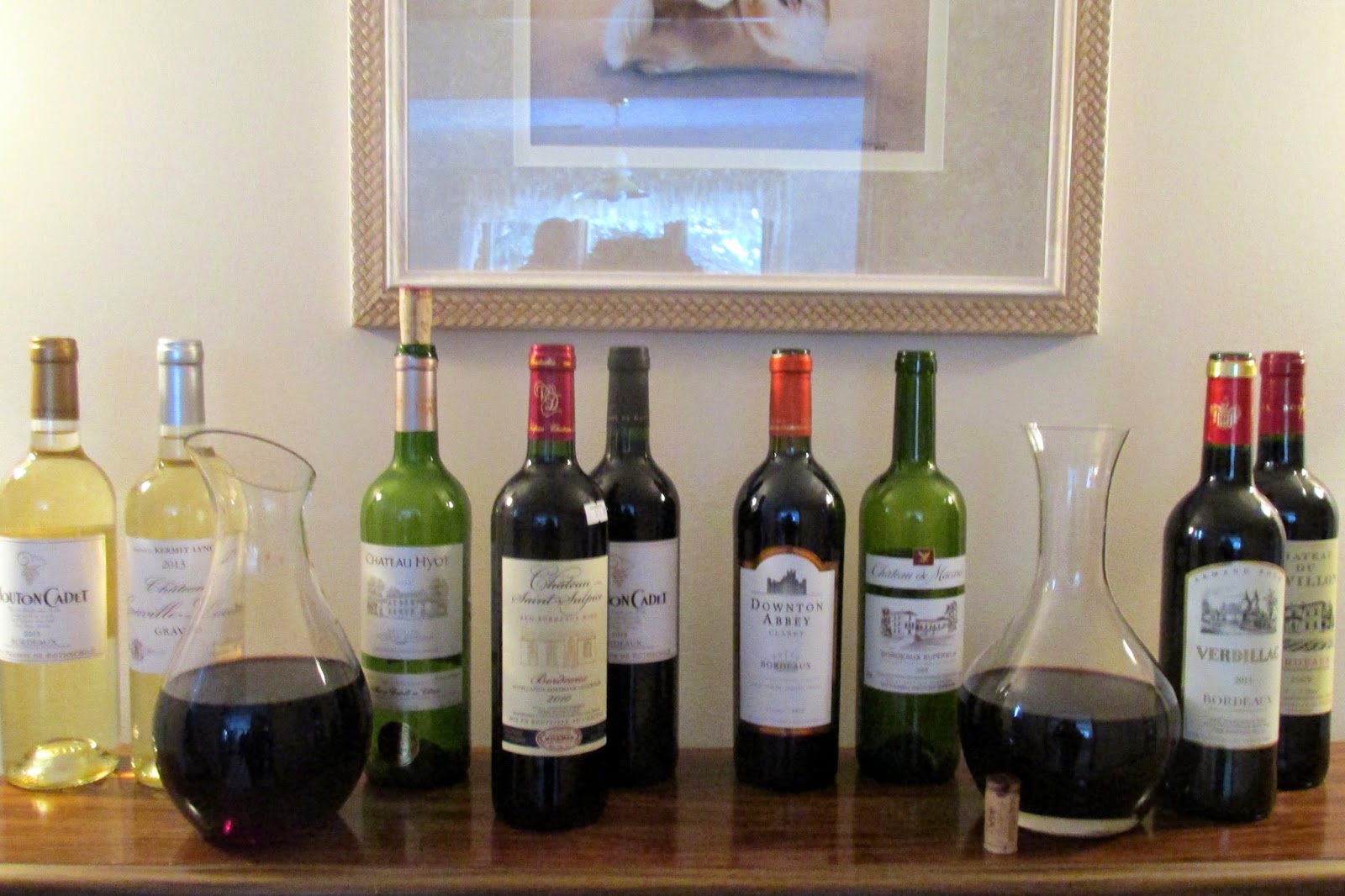 Bordeauxs -- white and red -- were on our most recent tasting menu. We started out with a 2013 Chateau Graville-Lacosta Graves Blank, which has 12% alcohol and is a combination of Semillon (75%), Sauvignon Blanc (20%) and Muscadelle (5%) grapes. 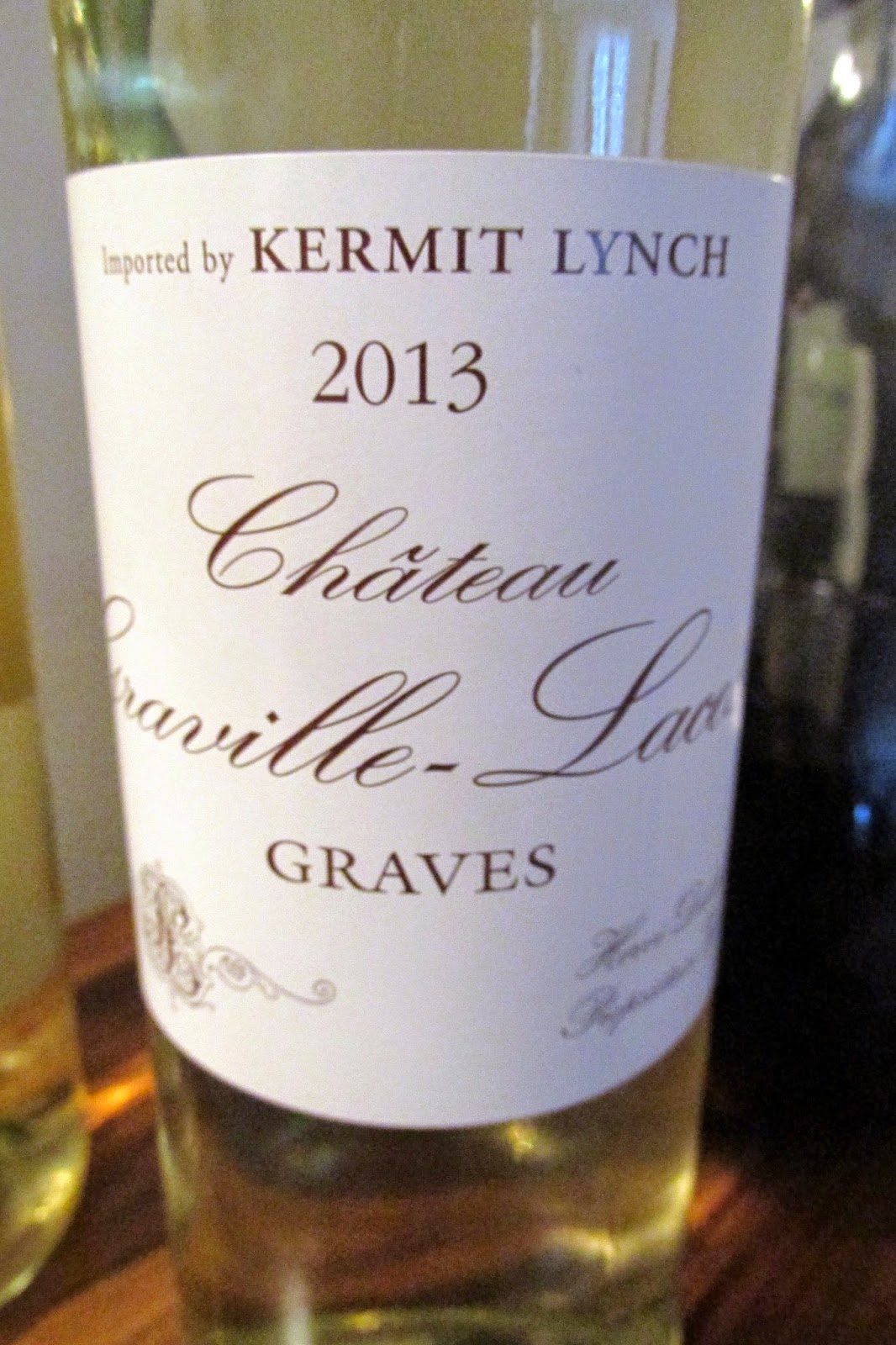 Aged in stainless steel, my preferred aging method for whites, I was not alone in finding it fresh and fruity. For me the primary taste was grapefruit and all I could think of was sitting in the sun, on the beach at the cottage. "Good for sipping by the pool in the sun," Roger said, with Mike adding "Or, in the shade!" At $18, I might be less likely to buy this just for sipping -- but if I was expecting guests up north and I knew they liked white, I'd be on the hunt for it.

Guests Bob and Joan brought our second white, a Mouton Cadet 2013., with the same grapes but a different blend -- heavier on the Sauvignon blanc (65%) and lighter on the Semillon (30%, with the Muscaldelle weighing in at 5% again. 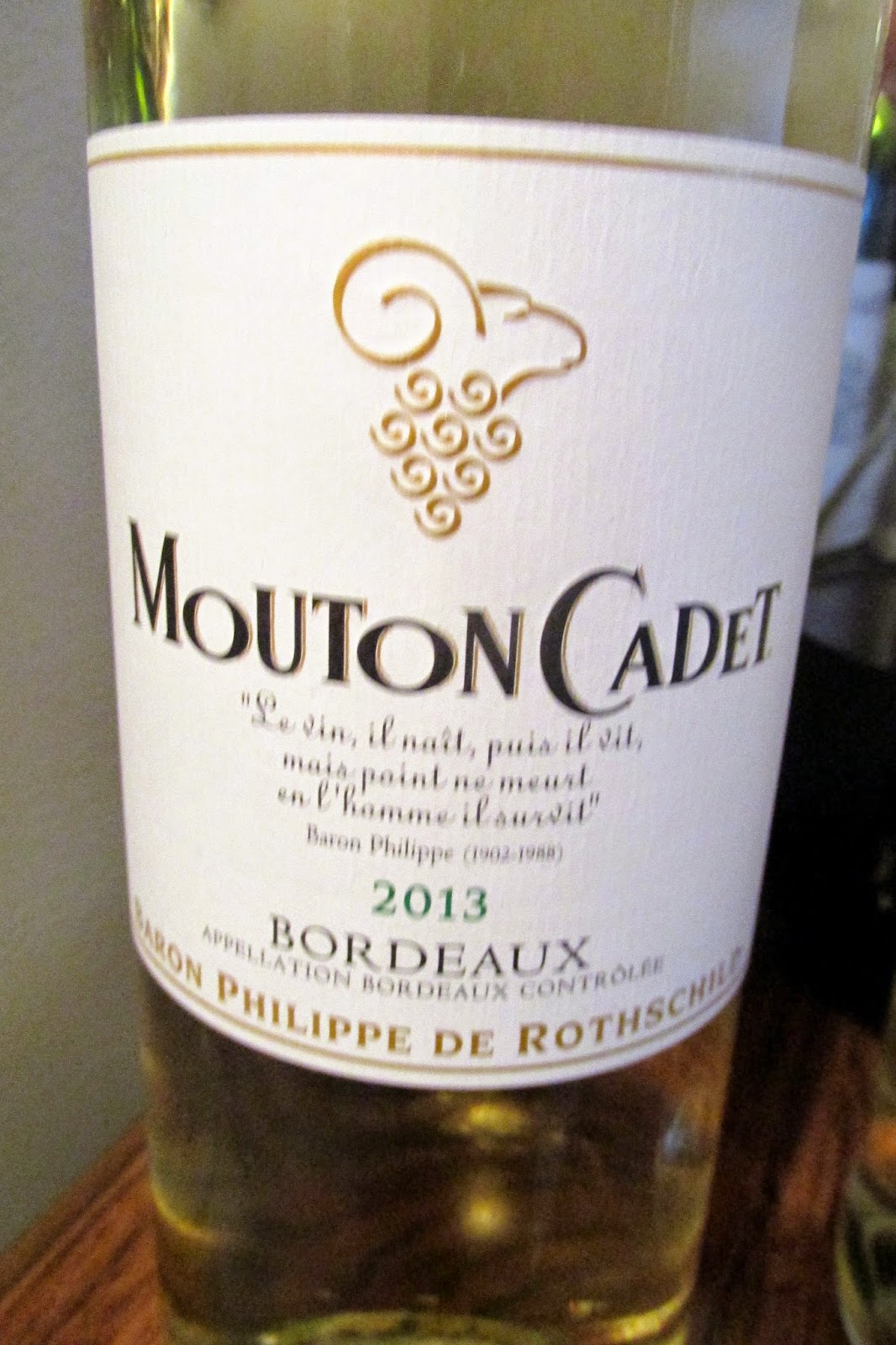 This was dryer than the first and some said sharper. There were mixed feelings about it, with some of our group liking it better, some less so. "What I'd like to do is open both bottles and try them side by side to tell what I like best," Clayton said. Unfortunately, by the time we opened this one, the 14 of us had sipped the first dry! But at $10 per bottle, the price was definitely right.

Our third wine was also from Bob and Joan, a Mouton Cadet Bordeaux 2012. This vineyard is owned by Baron Philippe de Rothschild and we found this to be a very good table wine, with a mellow, nice flavor. 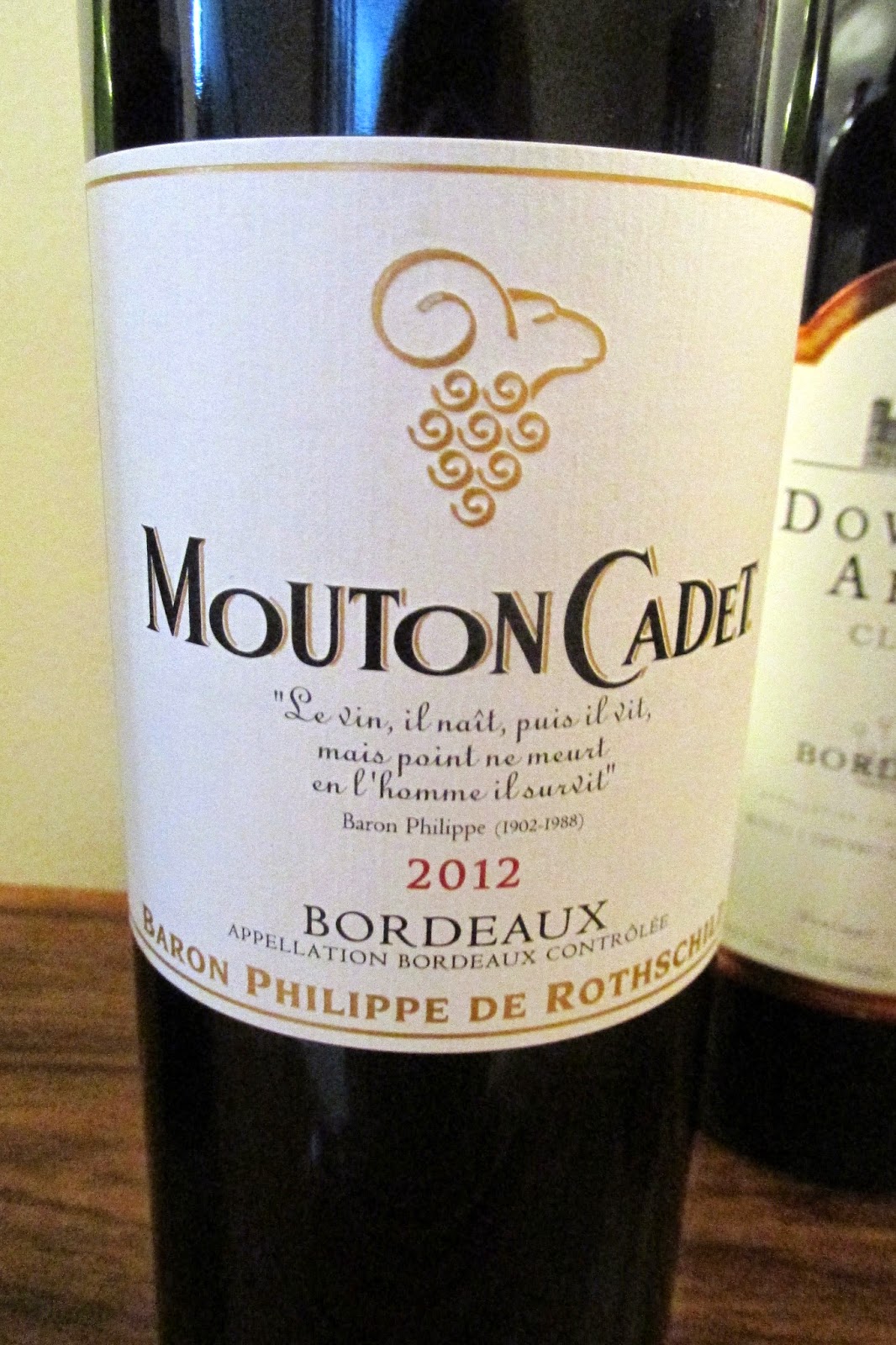 With a blend of 80% Merlot, 12% Cabernet Sauvignon and 8% Cabernet Franc, it had a lovely flavor and again the price was very good -- $12 (but on sale, so look to pay a bit more if you get it retail.)

Barb and Mike brought our fourth wine, 2009 Chateau Du Pavillion Bordeaux, a blend of 80% Merlot and 20% Cabernet. "This is serious," Rick said, while Roger noted it had "a strong bouquet" and Barb chimed in to acknowledge "musty overtones," adding "It's making my nose sweat. I can feel it." (We think she may have just been feeling the fourth taste.) 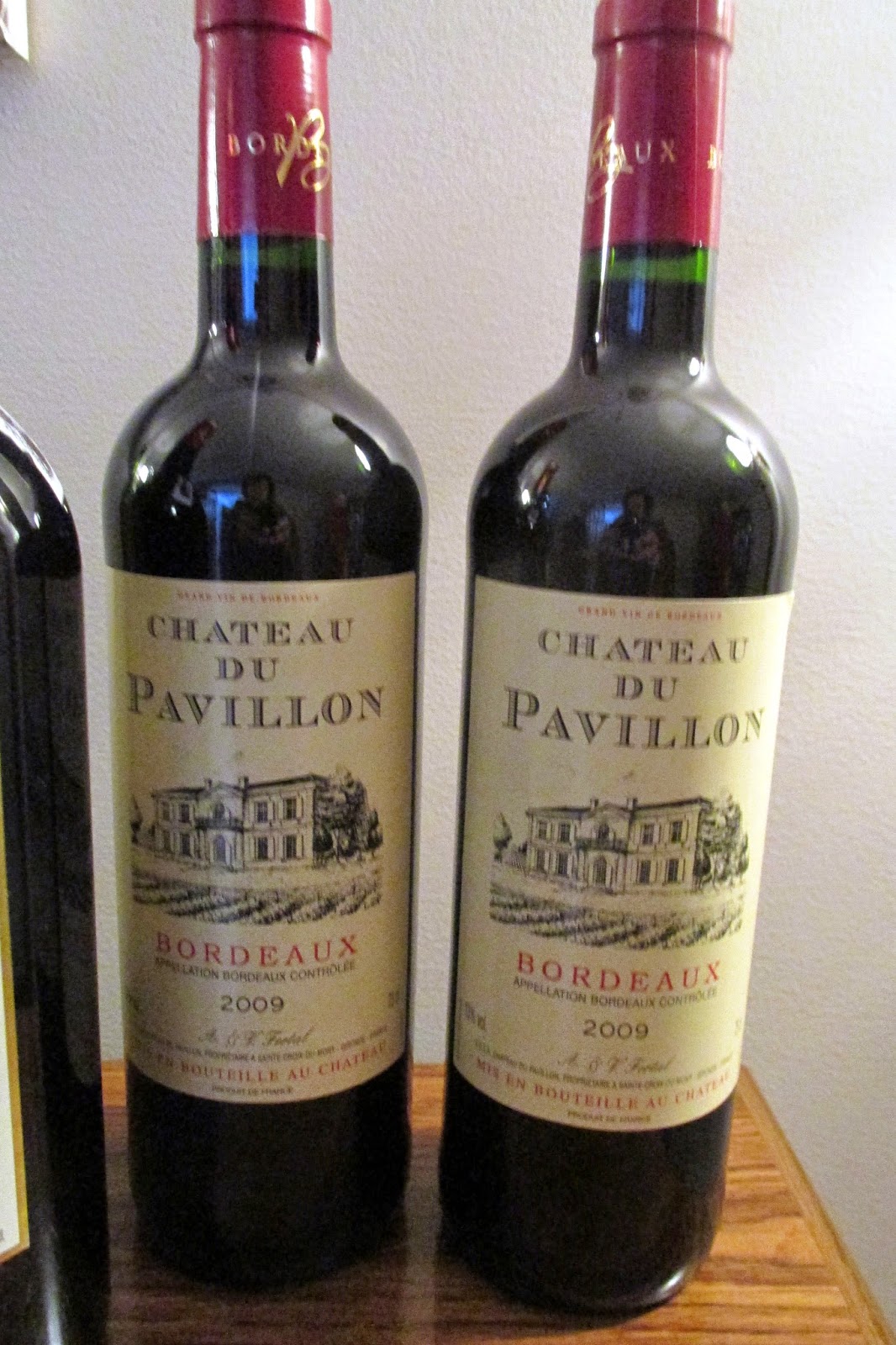 Many of this called it "A nice surprise" and a hit. I noted it would go well with blue cheese and chocolate, my two favorite bits on the snack tray. Cost on this one was $12.99.

Guest Suzanne was up next with the Downton Abbey 2012 Claret (Bordeaux). This was a big hit and at the end of the day several of our group called it their favorite. Its blend is 70% Merlot, 25% Cabernet Sauvignon and 5% Malbec. Notes from the web suggested opening this bottle for an hour and/or decanting it to let it breathe. 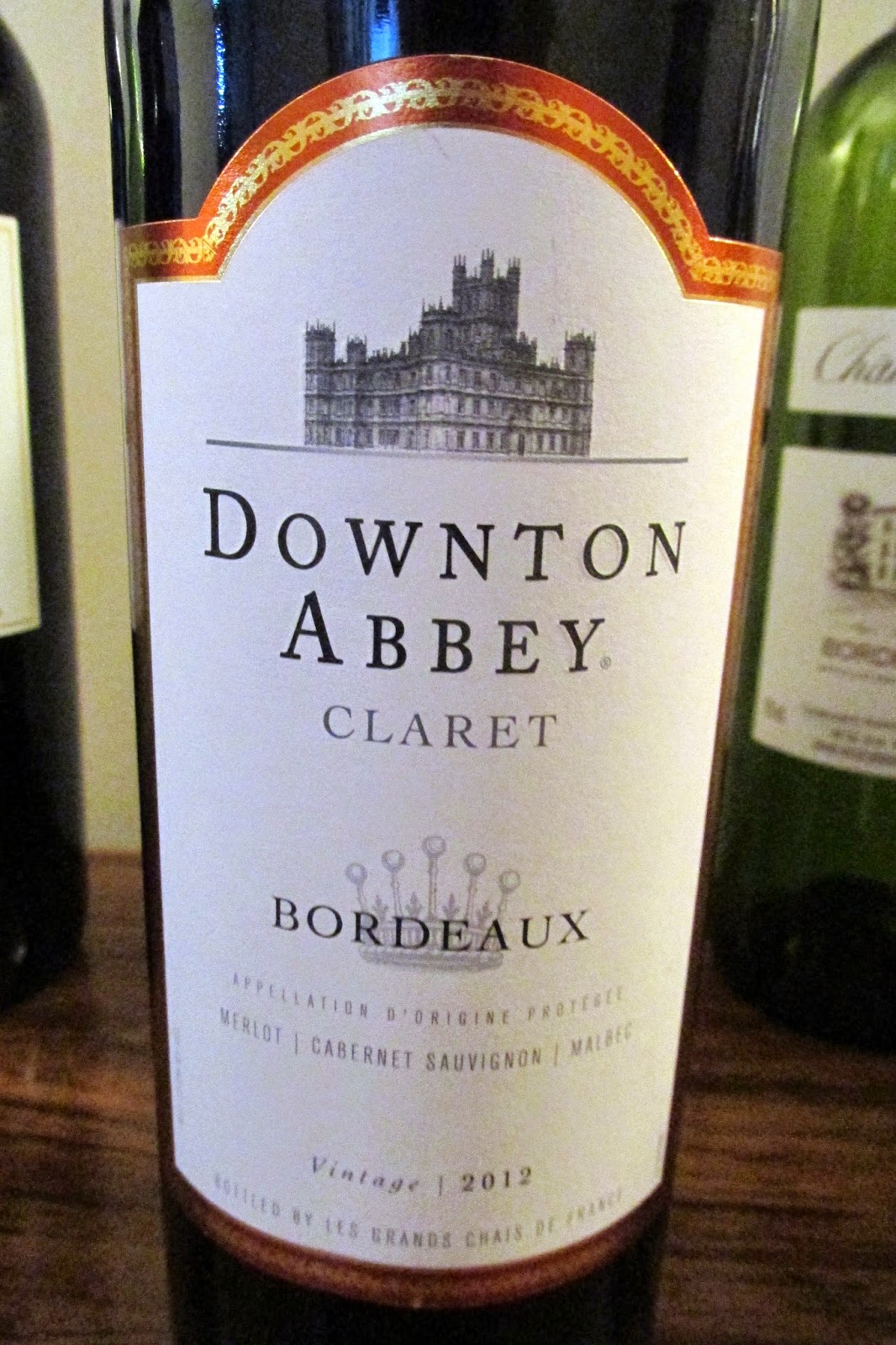 "The flavor of the wine is delicious," said Clayton, while Mike acknowledged its "nice tanins." It was very smooth. Suzanne noted it had hints of violet, which Downton fans will know was a pun recognizing Maggie Smith's Dowager. Suzanne paid $17.50 for this at the wine store but Roger had seen it at World Market and said that it was $15 there. 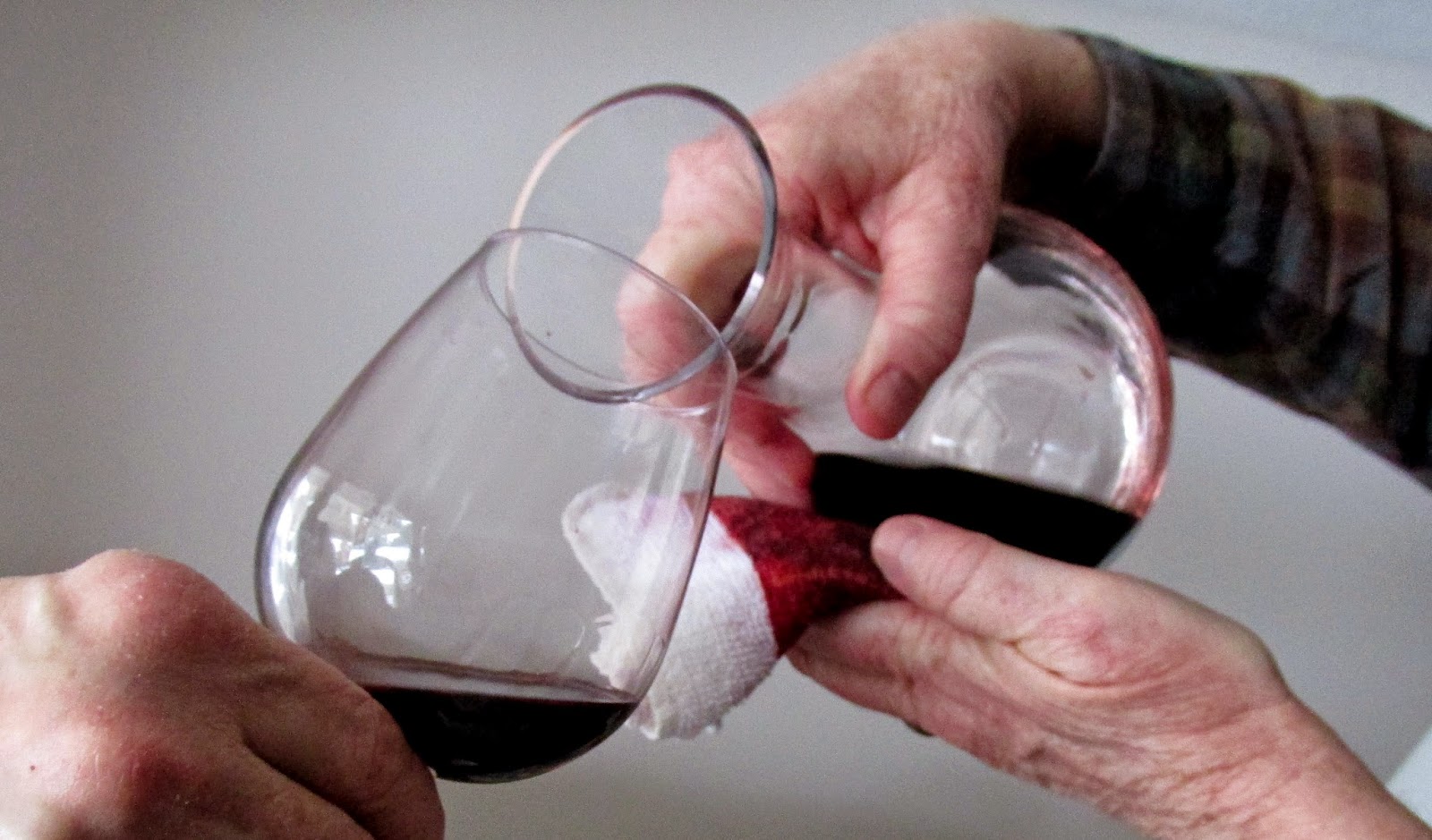 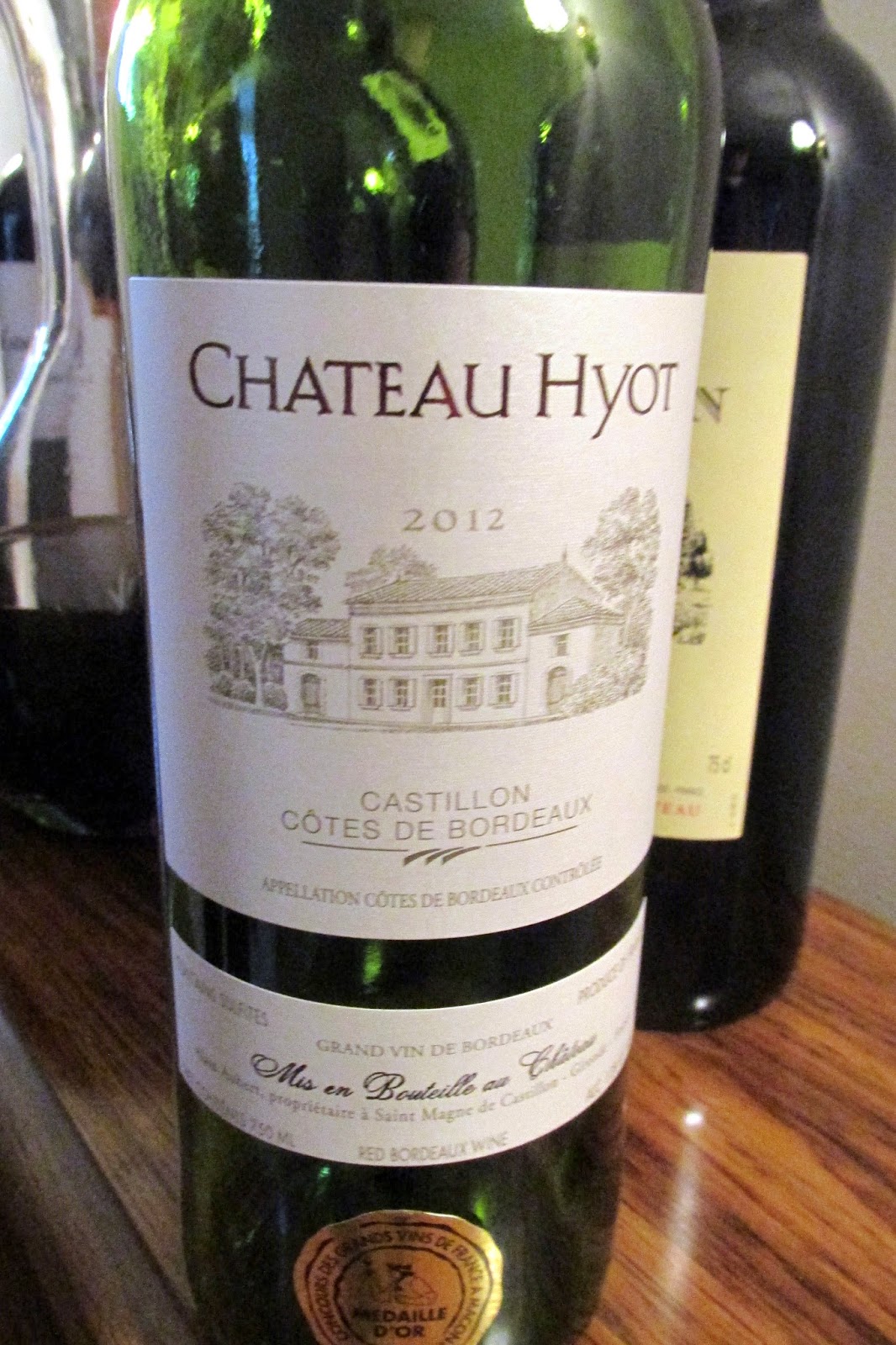 Cost on this one at the wine store was $17.50 (before a 10 percent discount.) Worth it, but you can probably find a wine almost as tasty and as rich in the $12.99 zone. Serve this up with a nice roast or beef stew and you'll be happy indeed. 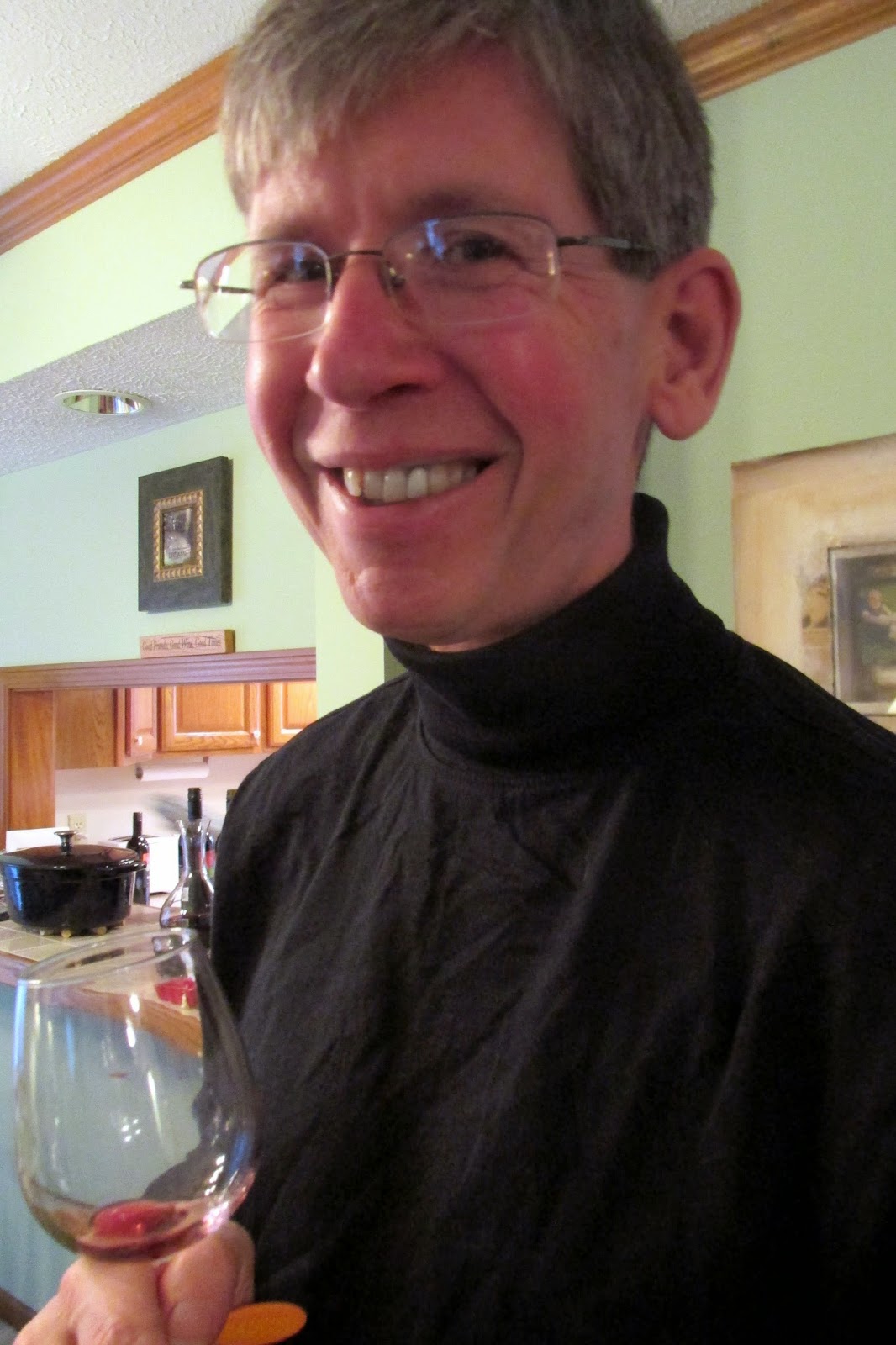 Roger and Meredith offered Chateau de Macard Bordeaux Superieur 2009 (a very good year). Today Show had previously listed this as a "go-to holiday wine" in a 2011 segment. The years have been kind to it and it was very good. "I like it," Suzanne said, with Barb adding, "It's really good." 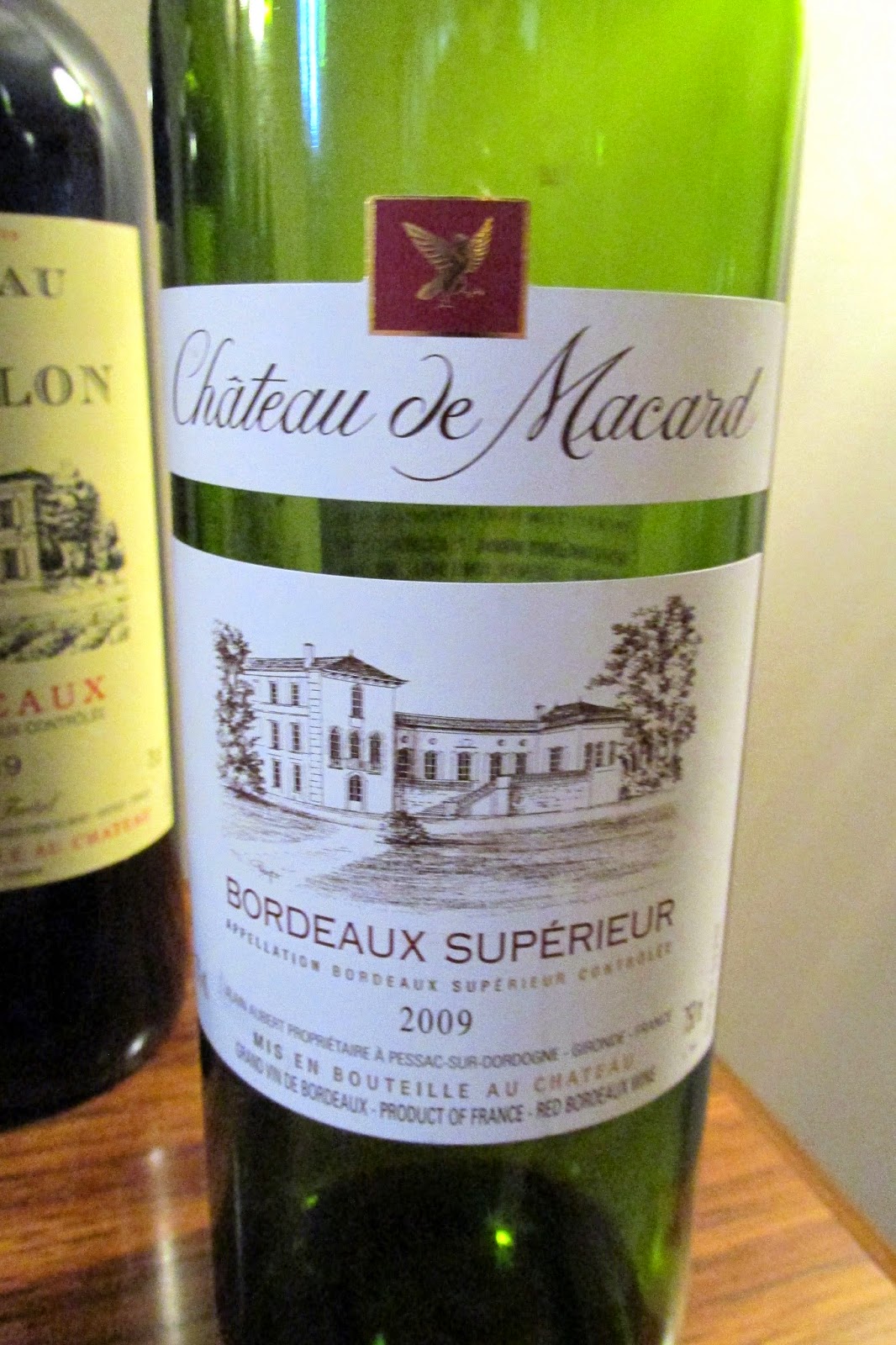 We didn't share the percentages but it was a typical Bordeaux with Merlot, Cabernet Franc and Cavernet Sauvignon grapes. It was at this point that someone noted that all our reds had been very good. "I almost bought the Downton Abbey wine," Roger said, "But this was cheaper. He paid $10.99 for it on sale (retail, $12.99).

It was around this point that Suzanne said, "How do eat dinner after all this?" "Oh honey," said Barb, "You find room!" 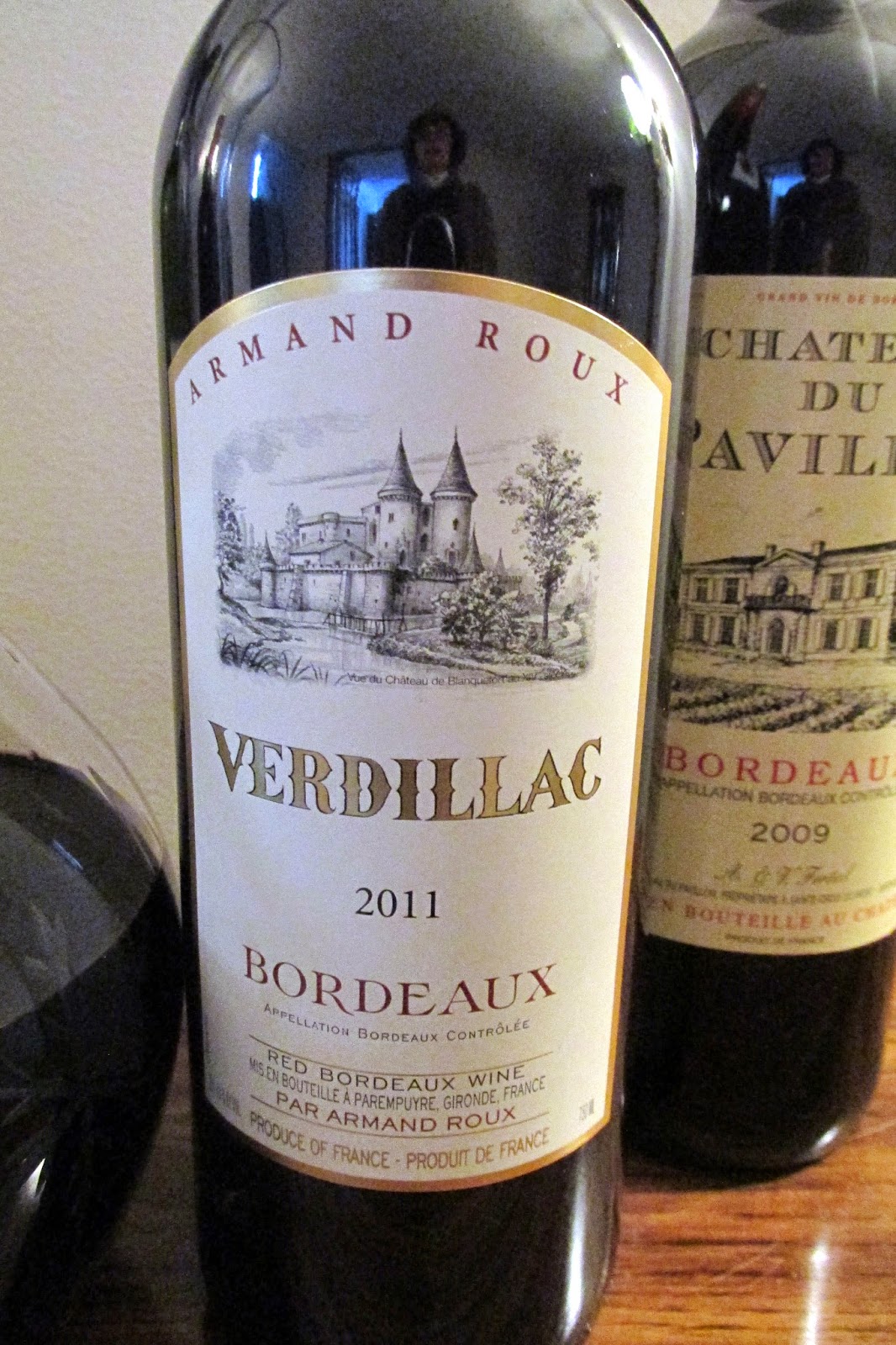 Pat was up next with an Armand Roux  Verdillac 2011, $14.99. It was a Cabernet Sauvignon and Merlot Blend and yet another delicious wine. The black cherry flavor was there and it had a bit of spice -- not enough to be overpowering, but enough to be very nice. 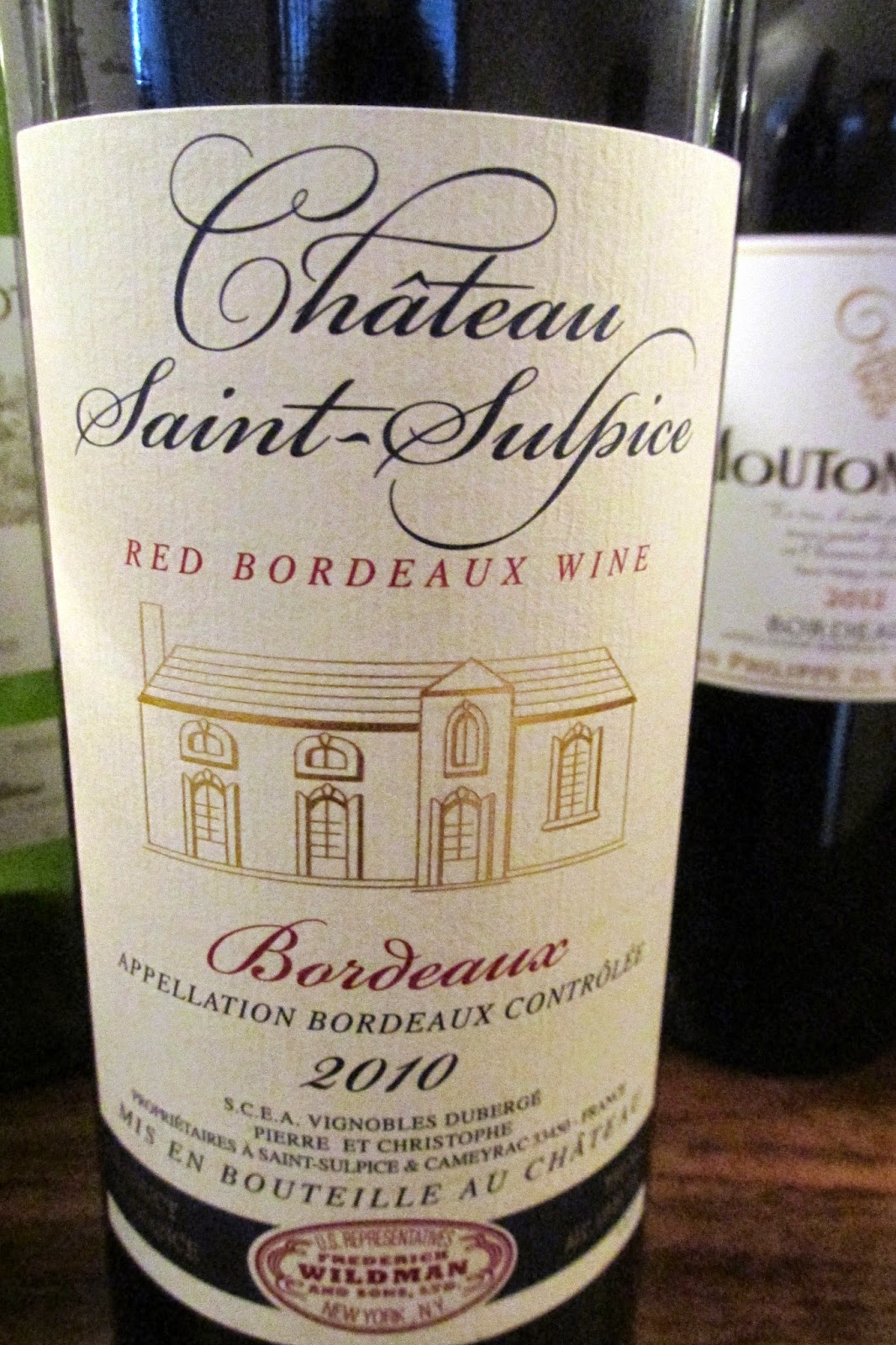 Once again, there were no complaints. Spicy with black cherry as one of the strongest fragrances (to be honest, I can't really tell which fruity tastes are which except grapefruit!) it was very nice and a good price.

Of course, once we taste, we dine! And as usual, the Cork Poppers pulled off a feast. 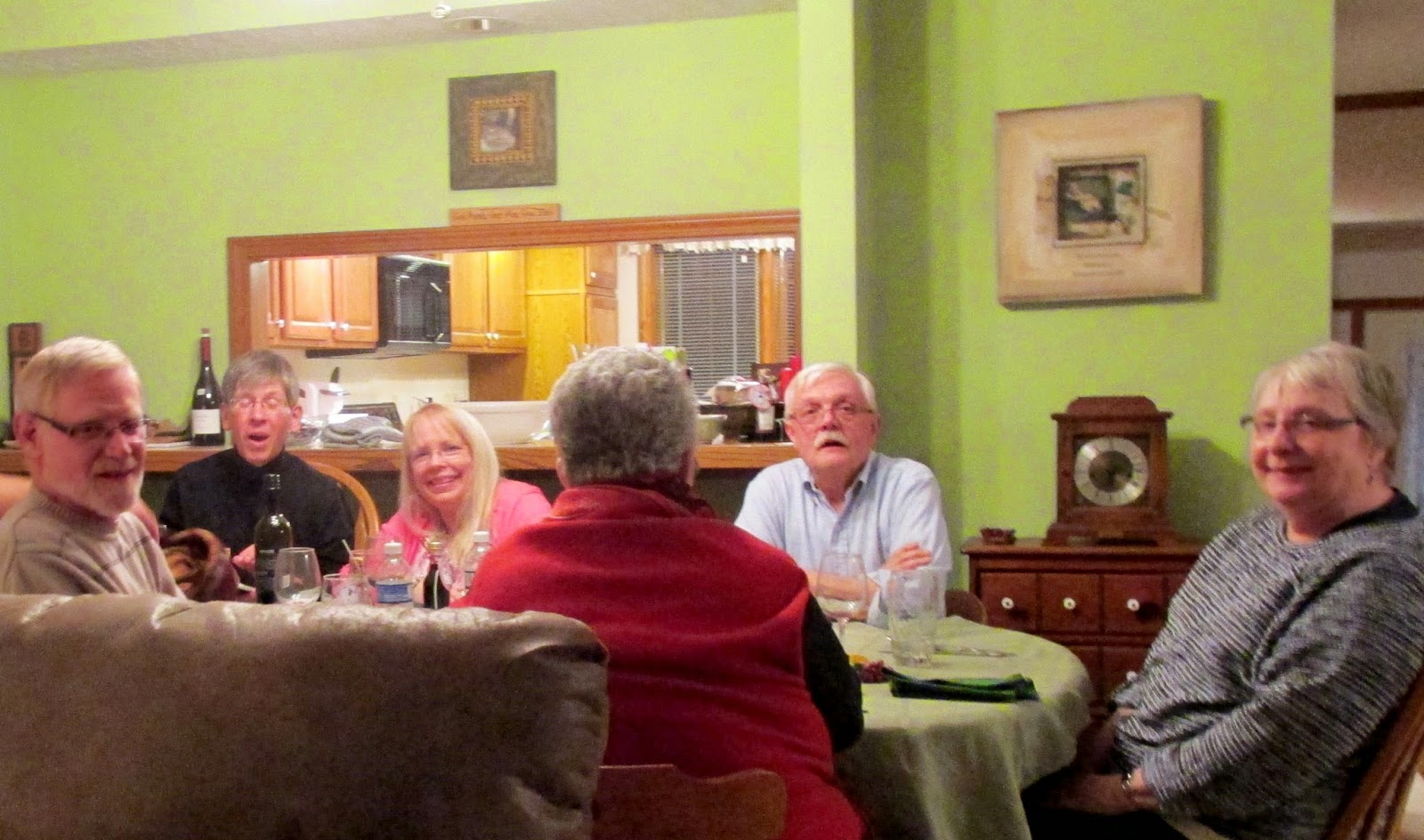 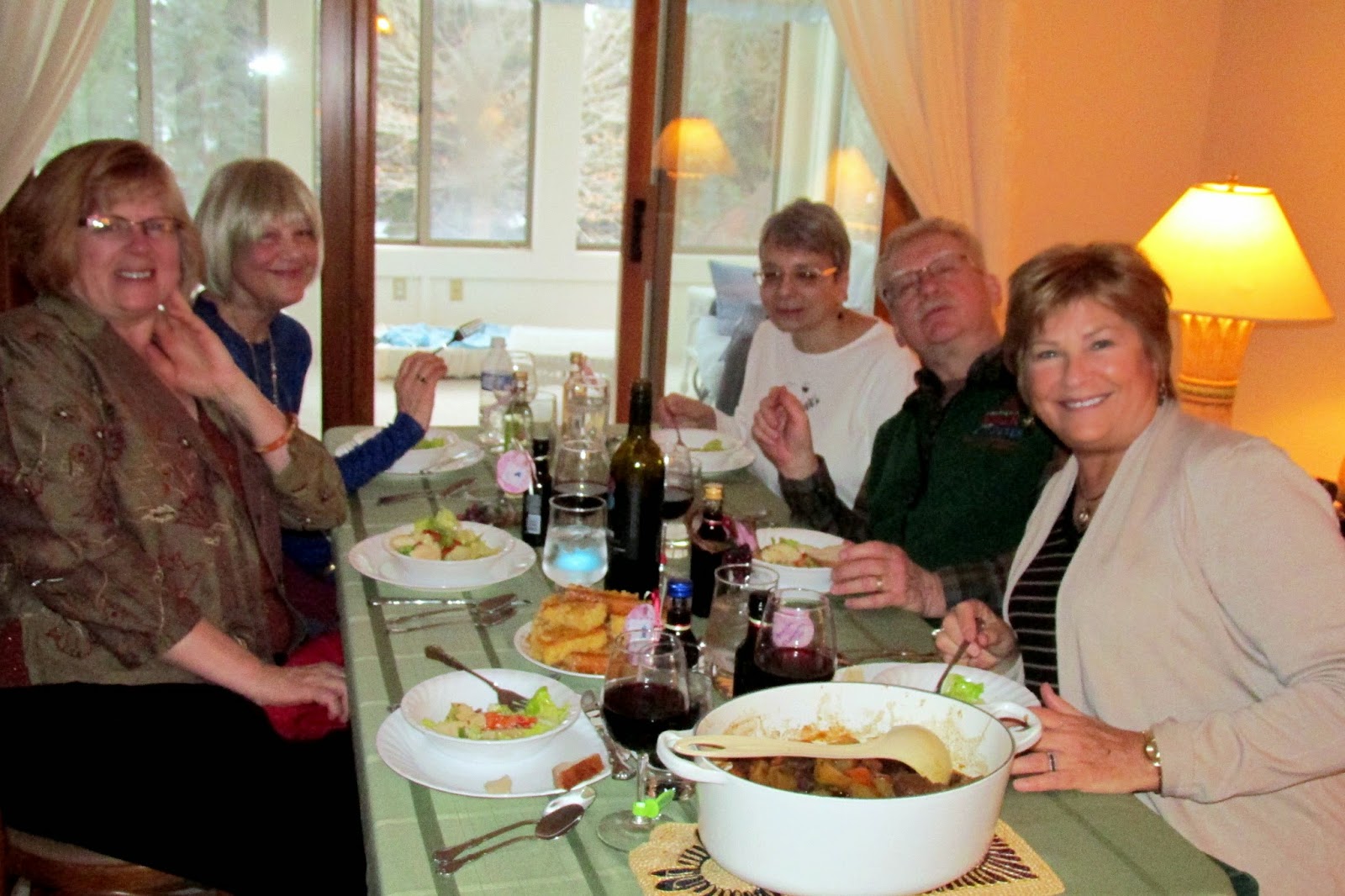 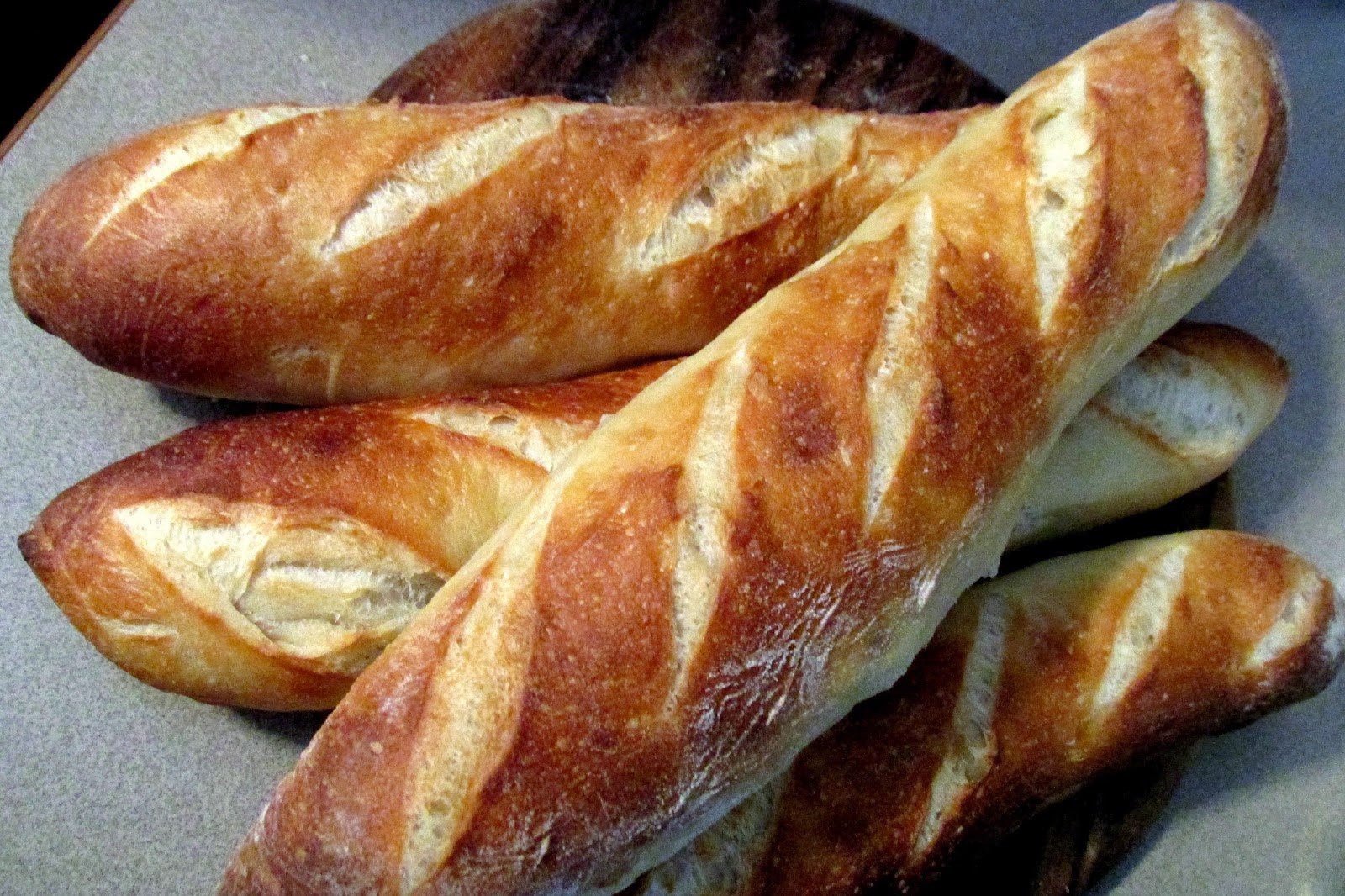 The tables were lovely -- as always -- with cute wine bottle favors. 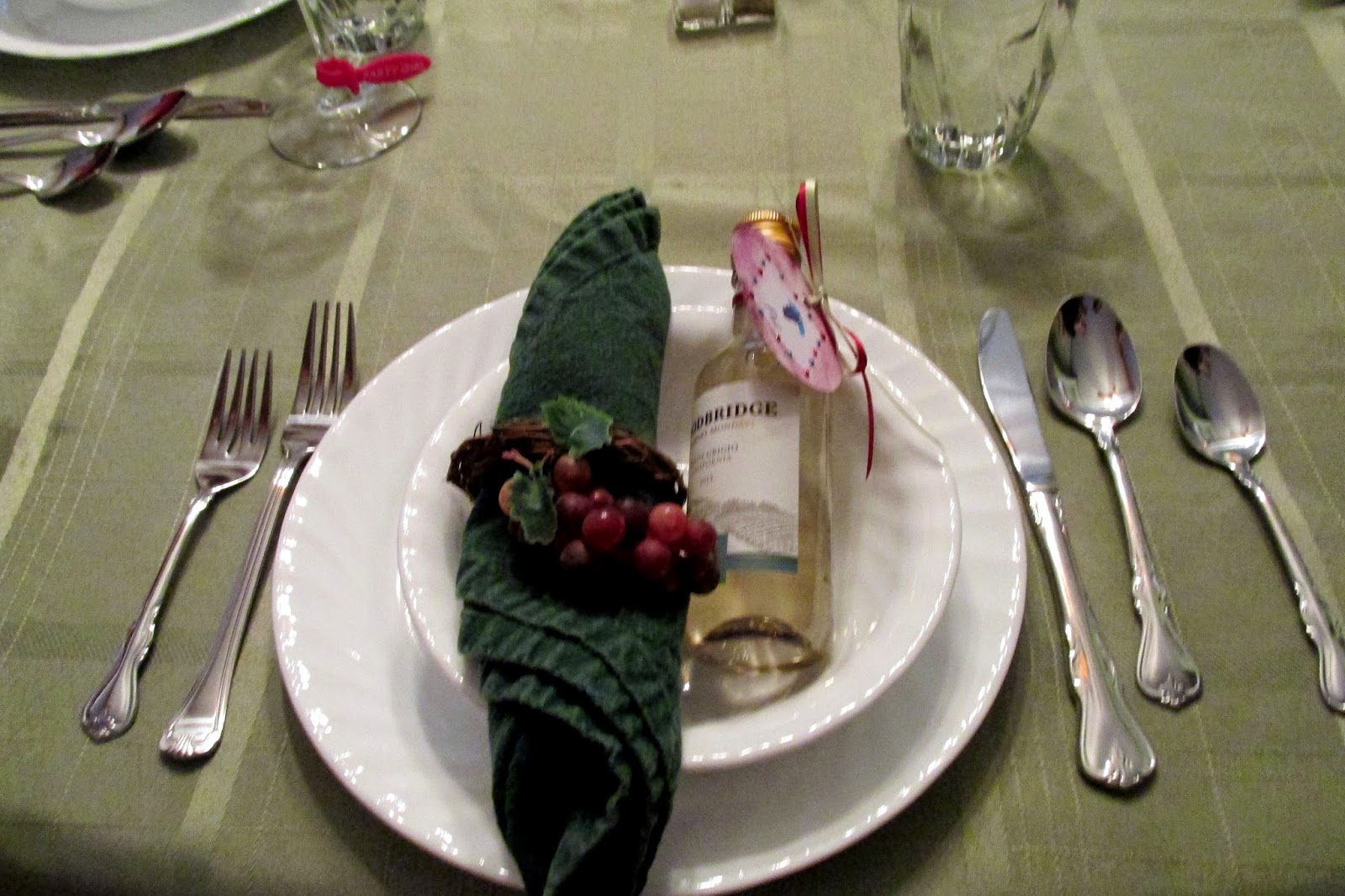 And the grand finale, Barb's chocolate on chocolate dessert was to die for. 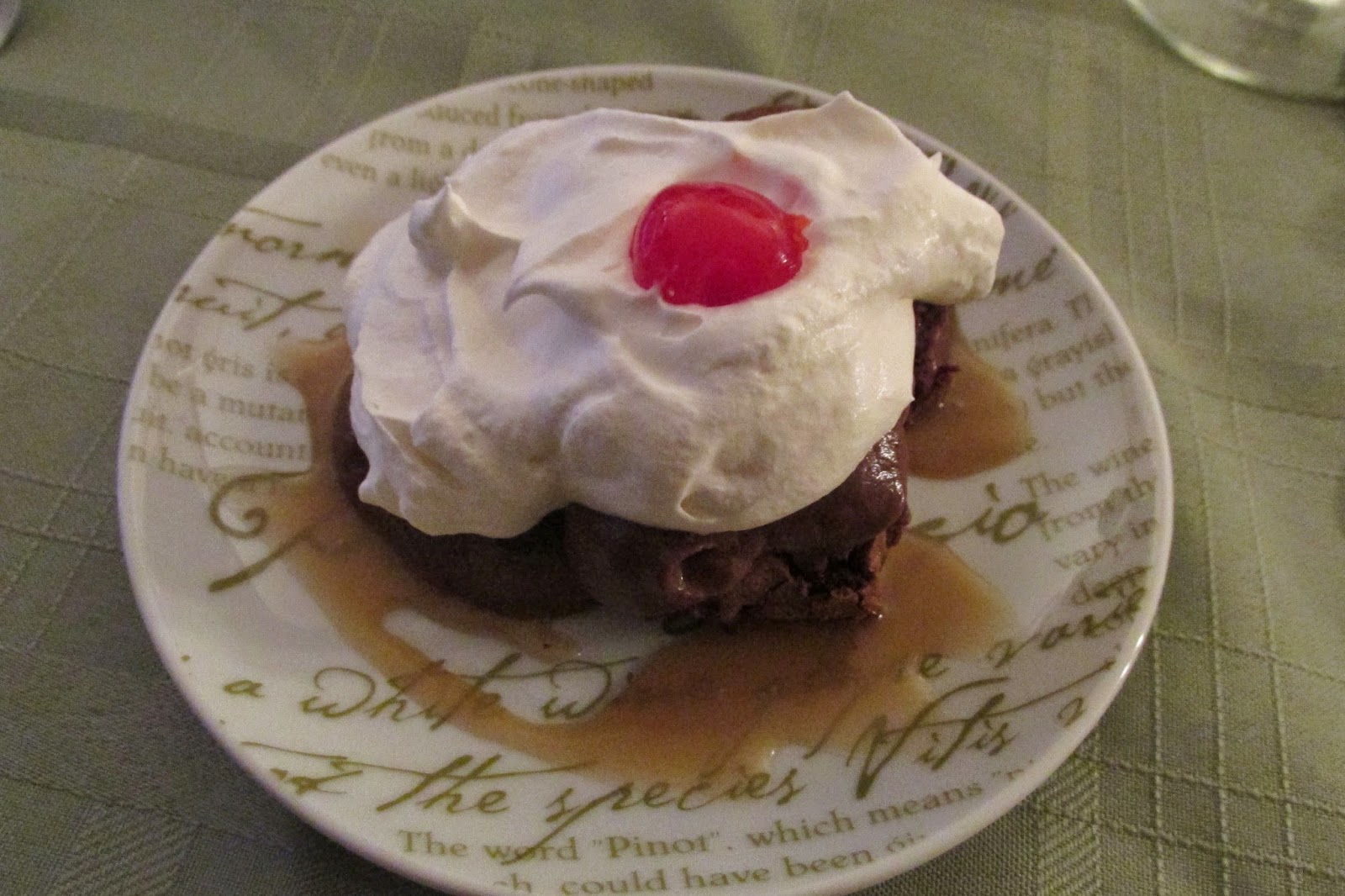 Of course, what's left to do after that but to waddle home.

I'll take a bottle of each!

You always have such a good time at these gatherings.

This looks like you had a wonderful time. I'd love doing a wine tasting like that, too. My parents used to do this when I was little :)
I want to try them all ;)

I don't know anything about Bordeaux - thanks for the info, Jeanie. After all that sipping, I might need help getting to the table! However, the food looks delicious.

A wonderful evening with great friends! I'm ready to give that a try too! Thanks for the tips. The wines look very tasty! Have a wonderful weekend!
Hugs. Marg.

Oh, nothing like a good red wine (or white in my cooking) to make things interesting! You surely live happily sweet Jeanie! Friends, food and wine. OH YEAH!

Well you're making me thirsty and the sun is just now rising ;-)
Rick's bread looks taste temptingly delicious...lucky girl getting to be there to welcome it out of the oven...ummm
oxo

I am not much of a drinker, but do love your spread of food. Everyone looked like they had a wonderful time.

Lovely gathering you have there. Although I'm not a drinker, I love the food in your Cork Poppers events. Good to know your lifelong, Canadian friend Suzanne has joined you this time.

Great fun to be had here. I like the wine bottle at the table setting!

Sounds like such a fun night! Rick's bread always look so amazing - he's quite the talented bread maker! I am glad you all had a fun night!

I want my very own Cork Popper group. You do such a great job of bringing to us the atmosphere and fun of this group.

I do not know much about wine-but those baguettes look incredible and the evening sounds like great fun.

I don't drink, but you now have me craving grapes and grapefruit. A cheese baguette sounds good right about now too, LOL!

I haven't tried all those which you did but one thing I am sure if is that you and the company surely had a great time.

I'm so impressed that you are able to note different tastes and aspects of each wine. My complete knowledge of wine is I usually know when it's good or not so good. I'm not sure I would be able to distinguish grapefruit in a wine if it walked up and slapped me in the face. :) I usually choose one by how pretty the label is.

I do LOVE a white Bordeaux! (Too much oaky white is too heavy for me!) What a great, interesting selection here! Fun with the test of whites and reds. Downton Abbey wine... what won't Downton Abbey be labeled on?! LOL... That Armand Roux Verdillac 2011 with the cherry & spice sounds VERY delightful! And Rick's bread... gotta have the bread! ;o) I'm waddling just thinking about all this calorie-laden goodness... LOL! Always so much enjoyed your Popper posts, Jeanie--thank you! Happy Days ((HUGS))

You can't beat a drop of Bordeaux.
Lovely area of France too.
The vineyards have rose bushes at the end of every row, looks so pretty.
Rick's bread looks fabulous, could go a chunk just now!