There probably isn't much I can say about the Eiffel Tower that hasn't been said before. Built for the Universal Exhibition of 1889, the tower was scheduled to be only for the event. 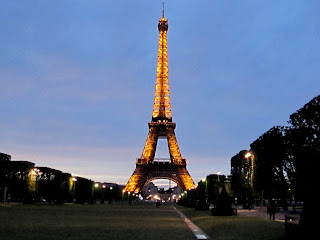 Gustave Eiffel designed the tower and it met with a good deal of bad press. "There's no way to avoid seeing it," author Guy de Maupassant said. 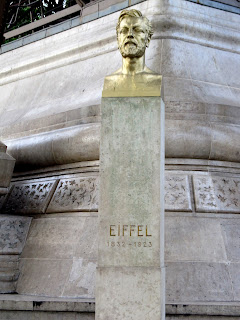 At the time, it was the world's tallest building, and remained so until the Empire State Building was constructed. 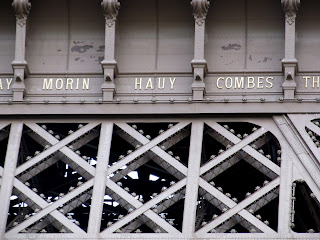 So, why does it still stand? It all has to do with the radio towers on the top of the building! All of a sudden it was practical! 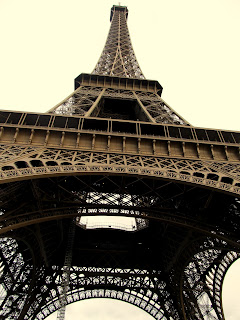 I've never been up inside the tower -- partly because of height issues and partly because of timing (and, in 2009, lines). But there are lifts that can take you up three levels, the top being 905 feet! There are other stops as well, including the Jules Verne Restaurant on the second level. 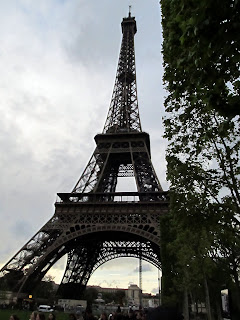 My guide book tells me that the complex patter of pig-iron girders comes from a need to stabilize the tower in strong winds. 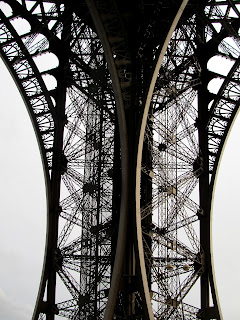 It wouldn't matter to me -- I find it beautiful! 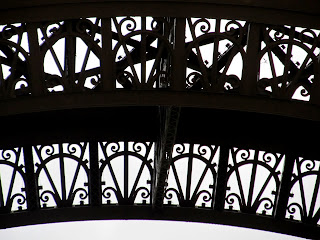 The first time we saw it was on the road, leaving for Brittany. Then, on our car-ride through Paris, Jerry dropped us off at Trocadero, which has an amazing view, so we could get some photos. 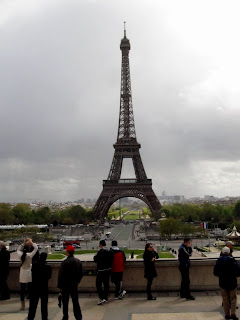 When we returned several days later, it was raining, as usual. We were on the way to dinner at Tribeca in Rue Cler. We wandered through the Champ de Mars, which is on the south side of the tower, and because not many others were out in the rain, were able to get some good close-ups and put down the umbrella for a photo op! 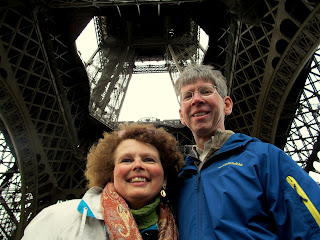 .
When we returned at sunset, we were clearly in for a treat. 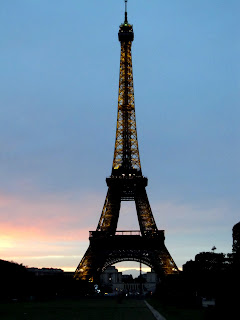 The later it got, the more beautiful it became! 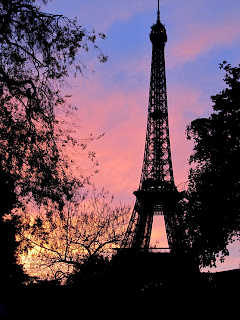 And then the lights came on! I'm told that generally on the hour, they twinkle for 10 minutes. It didn't do that while we were there, but that was fine with me! 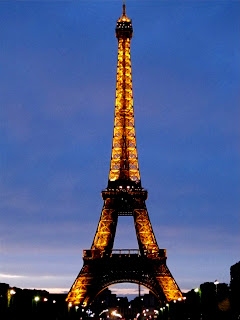 And, as we left, we couldn't resist one last photo! 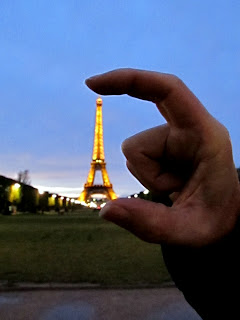 1) There is an admission charge to go up in the tower. They say some of the best views of Paris are here. If you're not for heights or admission, enjoy a picnic on the Champ de Mars and walk around the base of the tower, which is fascinating in itself. 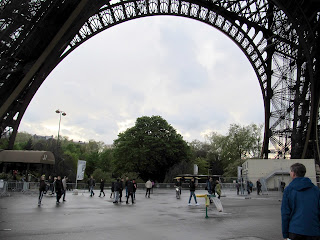 2) Try to get there in the evening so you can enjoy the fabulous sunsets and lighting that we did. 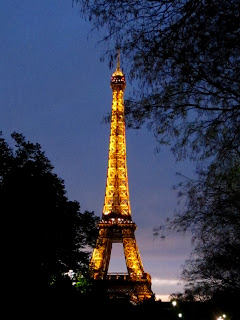 3) Jerry was right -- the best "photo op" view is from Trocadero, because you can get the entire tower in the photo background.

4) While you're in the neighborhood, head east a few blocks to the enchanting Rue Cler, a two-block area that includes lots of street vendors and some excellent restaurants. If the weather is nice, you can easily find your picnic treats there!

This post is part of Bookbath and Thyme for Tea's "Paris in July" party! It's also part of my "vacation post" drawing, which will conclude whenever I get through it all! Please link HERE to a marvelous of over 25 "Paris in July" participants!
Posted by Jeanie at 4:15 PM

I was in Montmart when I saw the tower at night. Breathtaking.

Thanks for sharing your beautiful photos. I especially loved the ones at sunset. Jim and I took a dinner river boat tour and were on the deck of the boat where we could see the tower lit up at night. It was magical.

OMG, my husband proposed right there :) So beautiful.

I have been part way up in the tower, but not all the way. My husband says we still need to do that. I have enjoyed the lights at night from a boat on the Seine, quite beautiful. Your photos are lovely. Really like that last one.

These are wonderful photos!! My favorite is the 6th from the top. But the one at dusk is also marvellous, so are the rest. Thanks for sharing these!

Rue Cler has a ton of memories for me. We had close friends who lived there from around 1975 until 1995, and we visited often. The cheese shops, produce markets, butchers, and other food shops were wonderful -- also the crowds of shoppers. Our friends lived above a butcher shop, in a spacious and very nice apartment. I wonder how much has changed.

Thanks again for your wonderful post and beautiful pictures.
If I may add a tip: sometimes you have a long queue waiting to go up, you may have to wait for a couple of hours. The tips is: walk up to the next floor, and from there you have a much less long wait to go up.
Also to let you know: unfortunately there are quite a few hermaphrodite words in French, that is, the same noun can be either masculine or feminine, then of course with 2 different, and unrelated! meanings. So LE tour = the tour, like when you tour something - le tour de France.
BUT the tower = LA tour! so it LA Tour Eiffel.
Eiffel was born in my home town, Dijon, Burgundy. They have a beautiful statue by him there, a bird. here is the link:
http://goo.gl/PXrjw

Thanks for LA Tour, I feel better lol. That's the problem with French people like me blogging in English, lol!

I can't give you any lessons in speaking French, but I can sympathize with your issues with height. Whatever the perspective your photos are very beautiful and the sunset photos are exceptional. I love that your pictures and words can almost make us feel as though we were there with you.

As usual, wonderful photos! I was in Paris 46 years ago and walked under the Eiffel Tower, but couldn't afford the ride up it.

Even if I could still see the drop, I'd want to go up the tower. I'd probably only ever do it once, but just so I could say I did, you know?

I can guarantee my hubby wouldn't though; he's afraid of hights!

Such beautiful photos... Thank you so much for sharing... I can only imagine the breathtaking sight in person..
So good to see you came to visit.. and thank you so much for pinning my art.. It is most appreciated.
Wishing you a wonderful weekend.
Penny

The Eiffel Tower is one of the coolest places to visit in Paris!

GLORIOUS... just glorious, one of the wonders of the world, I think! Love it lit up for night with sunset views...*swoon*...Gorgeous images, Jeanie :o) Happy Days ((HUGS))

Love the sunset photos and the nighttime ones. Beautiful

Happy Bastille Day! Have been trying to submit comments recently, but they won't take via my Google account. Will try a different method. Bon weekend!

These are ALL such wonderful pictures of The Tower!!! And I too love the "grid" look...it is all so incredibly artful!
What a lovely post, my dear....I've never been to Paris, except at the Airport on the way to Nice....But I love it all, anyway. This was a trip I should have made, but never did.
So, thank you for these truly WONDERFUL views of this great piece of "ART".

Did you ever see a film called "LE DIVORCE"? Wonderful film and there are some very important scenes that take place at and on the top of The Eiffel Tower....!

Oh how I love the Eiffel Tower! I saw it for the first time on my 2008 trip from the Trocodero area, which was a great area to view the ET from! I think it is just so beautiful. I thought I was going to think it was over-hyped... but I didn't feel that way at all. I love that photo of you & Rick, and I love your sunset photos! Those are framers!!

What? I didn't leave a comment? I've been here twice and apparently was entranced beyond words by your photos.

I do love the night/lights photos, but I'm equally fond of the ironwork tracery. The second sunset photo's my favorite for that reason - the "essence of Eiffel" just shines through.

Whether I can pull it off, I don't know, but you and Arti have inspired me to try for a Paris in July post. We'll see. If I can't manage it, maybe I'll do August in Paris!

Amazing photographs, Jeanie, and an amazing experience too. She is a beauty.
I decorated my creative corner (current post) with a touch of French flair and some images of Mademoiselle Eiffel, but I must admit that my heart is in New York City. Love that last pic. ;)
Thanks for sharing, love.
MUAH!
Marcia

Thank you so very much for all your wonderful comments on my blog today AND for giving me a grand la Tour Eiffel fix as well.

I needed the reminder about Paris in July. I'd forgotten to post for a while. That's done too.

Amazing photos. Thanks so much for posting.

I was just reading a book about the Chicago World's Fair. It seems that their main goal was to "out Eiffel Eiffel." I don't think they made it, but that is how the Ferris Wheel was invented.

The Eiffel Tower is a spectacular sight, but even more so after the lights come on! One of my favorite memories was seeing the ET from the deck of boat while cruising the Seine. The "sparkle light show" was amazing! So are your photos. I love the pink sunset and the fun pic at the end. I'll have to remember that next time I go, and after reading this post I hope it's soon. I'm so enjoying your travel posts.

Brilliant!!!
when our young son got to visit last year...he said he was not prepared to see the Eiffel Tower all a twinkle from his Bateau ride on the Seine

Somewhere I have a postcard that I mailed from the top of the tower to my parents...wonder if they still do that with a special postmark ?
oxo

Thanks for all your beautiful photos. I love La Tour too. She's so beautiful when glimpsed from any angle. I've been lucky enough to lunch at Le Jules Verne for my birthday in 2010. It was magnificent and I can't recommend it enough. I've never visited the Trocadero as whenever we've been in Paris it's been covered for special events.

Thank you so much for sharing. Paris and the Eiffel Tower are very special to so many of us. During my family's last visit, my daughter was so captivated that I decided to start a new venture, creating a line of jewelry containing a genuine piece of the Eiffel Tower---an incredibly precious, unique and beautiful souvenir for romantics and dreamers all over the world.

May you always hold Paris in your heart and in your dreams! Paul Michael Bedell / founder korbella.com